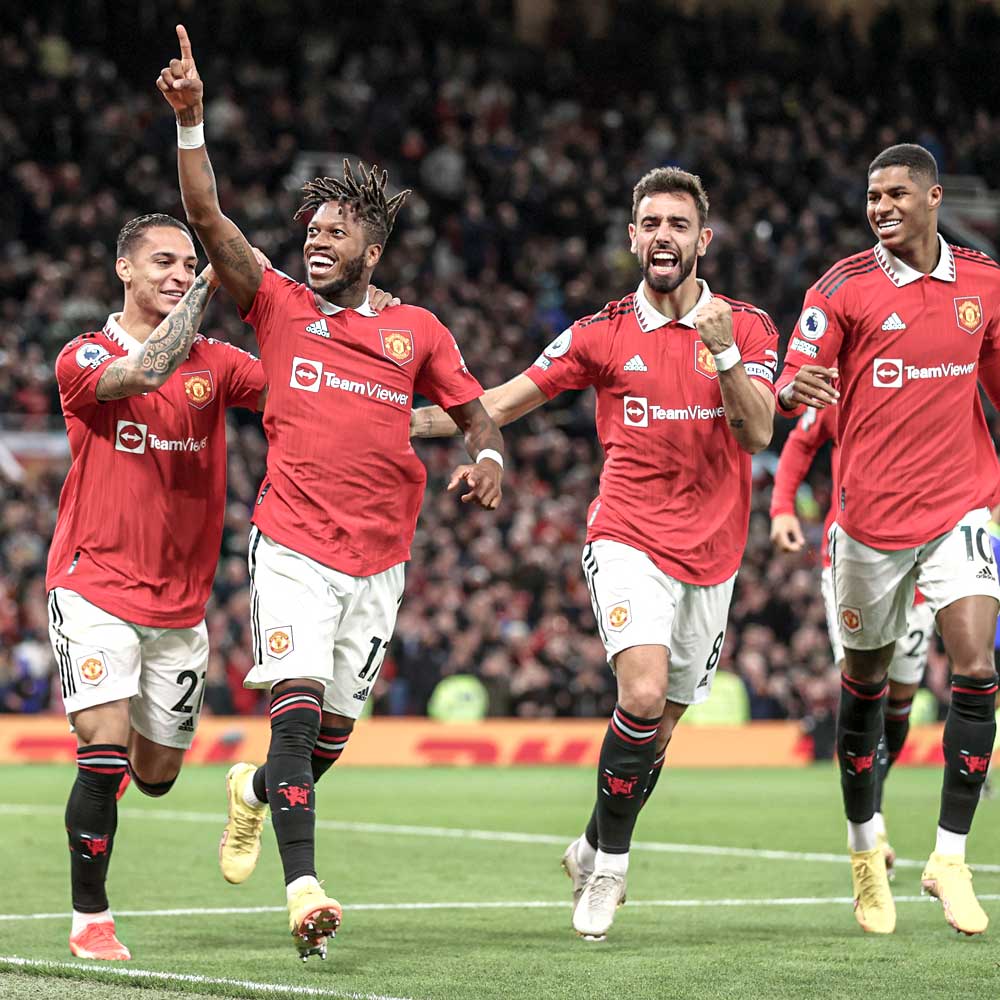 Manchester United put in arguably the best performance of Erik ten Hag's reign so far as they dominated from start to finish to see off Tottenham. Spurs went into the game knowing that a win would take them within a point of Arsenal at the top of the table, but they struggled with United's intensity and never truly got a foothold in the game. United had more shots in the first half of this match than they had had in any full Premier League game previously this season, and Spurs had Hugo Lloris to thank for keeping the scores level. Shortly after the break, though, United's superiority told, as Fred scored via a deflection off Ben Davies. Twenty minutes later, Bruno Fernandes – who put in a fantastic performance – put the result well beyond doubt. The win takes United to within a point of fourth-placed Chelsea, who they face this weekend.

Much of the post-match discussion surrounded unused substitute Cristiano Ronaldo's decision to leave the bench and walk down the tunnel while the match was still being played. Ten Hag, however, was keen to focus on the positives of a brilliant team display.

“I don’t pay attention today [to Ronaldo leaving]," he said. "We deal with that tomorrow. We want to focus on this team, it was a magnificent performance from all 11 players. Today I enjoyed the performance – we are celebrating this victory."

Manchester United set up in a 4-2-3-1 shape, but Fred pushed forward from the double pivot to become a number 8 and give them a stronger attacking presence in central midfield. Bruno Fernandes then adapted his position, moving into the left inside channel (below). From here, he provided penetrative movements between Jadon Sancho and Marcus Rashford as United built around Tottenham’s centre-forward pair and their second line of three to attack from wide positions. On United’s right, Antony often lacked support. Fred didn't provide the same inside-channel movements as Fernandes on the other side, and Diogo Dalot initially stayed underneath rather than overlapping.

The hosts eventually pushed both full-backs higher, primarily working around the outside of Tottenham’s wing-backs. United’s wingers then came inside, with the freedom to rotate with Fred and Fernandes, as long as both inside channels were always occupied. A central player then had to stay close to Rashford – usually Fernandes – as the hosts pinned Tottenham into a low block. They tested Hugo Lloris several times in the first half, though usually from range. Meanwhile United’s two centre-backs and Casemiro formed a solid triangle close to the visitors' two centre-forwards (below), limiting their central counter-attacking opportunities.

Fred’s deflected goal put the hosts ahead early in the second half, but it was United’s ability to dominate the second phase and regain loose balls that helped them maintain their attacking momentum. Preventing Tottenham from breaking from their deep block meant the visitors were locked into their own half for long periods. Rashford’s runs on the blindside of Eric Dier were particularly threatening on transition, especially when receiving from Fernandes. Casemiro, Fred and the United defenders were superb at breaking up play (below), allowing the full-backs to stay well ahead of the ball. Once the ball was won, these players progressed play forward quickly and accurately, meaning Rashford and Fernandes could maintain pressure on and in behind Spurs’ back line.

Fernandes’ positioning between the lines, and his ability to turn and face forward on his first touch, and deftly connect into Rashford running in behind (below), provided United with a significant threat throughout the second half. Even when United’s wingers swapped sides, they still operated in the inside channels, with Fred and Casemiro protecting the central areas. Fernandes’ well-taken goal gave the hosts a deserved cushion. He and Rashford kept up the pressure on their opponents, ensuring there was no way back into the game for Tottenham.

With Richarlison and Dejan Kulusevski unavailable due to injury, Antonio Conte set Tottenham up in a 3-5-2 structure, with Yves Bissouma coming into the side. Rodrigo Bentancur was therefore given more attacking freedom, and pushed forward through the right inside channel with penetrative runs off the ball. He worked well off direct play into Harry Kane, who pinned his marker, Lisandro Martínez, before connecting directly into Bentancur’s runs or finding a third-man run from Matt Doherty on the right. Pierre-Emile Højbjerg and Bissouma held their positions more, and often dropped to cover on the left (below) as Davies pushed forward from left centre-back. Both wing-backs, Doherty and Ivan Perisic, remained high when attacking, as Kane and Son Heung-min both looked to switch play and find them as quickly as possible when central support wasn’t available.

Tottenham converted into a back four during deep build-up, but United swarmed any play into the deepest Tottenham central midfielders – usually Højbjerg and Bissouma. Rashford pressed the Tottenham centre-back in possession, with Fernandes supporting close by to jump on to Tottenham’s deepest pivot. United’s far-side winger then moved inside to press Tottenham’s central midfield from the other side, while Casemiro jumped out from his pivot position to put more pressure on Højbjerg and Bissouma (below). Unless Spurs managed to play over the home side’s press to find an advanced wing-back on the far side of the pitch, they struggled to progress from deep.

Change to a box midfield

For the second half, Tottenham changed to a box midfield, with Son and Bentancur as two 10s either side of Kane, and Højbjerg and Bissouma forming a more permanent double pivot. However, the visitors were largely restricted to direct play into Kane, who looked to set to a number 10 (below), but this brought little success. This, coupled with too many careless turnovers in the midfield third, meant Tottenham’s attacks were limited, and also led to United launching numerous attacks. Spurs simply could not cope.

Rotations on Tottenham’s left eventually helped them progress with purpose into United’s half. Højbjerg dropped out of the double pivot, and Davies pushed forward from left centre-back. But with Antony patiently waiting for them to swap positions, Spurs required a further movement from Davies to progress. He moved inside, giving Dalot a decision to make as to whether to track this run or follow Perisic as he dropped (below). From here, Spurs had a brief but secure way to progress into the final third. Perisic delivered a few balls into Son and Kane in the middle, but Tottenham failed to create any clear-cut chances throughout the game. This was a one-sided affair that never looked like ending in anything other than three points for Manchester United.