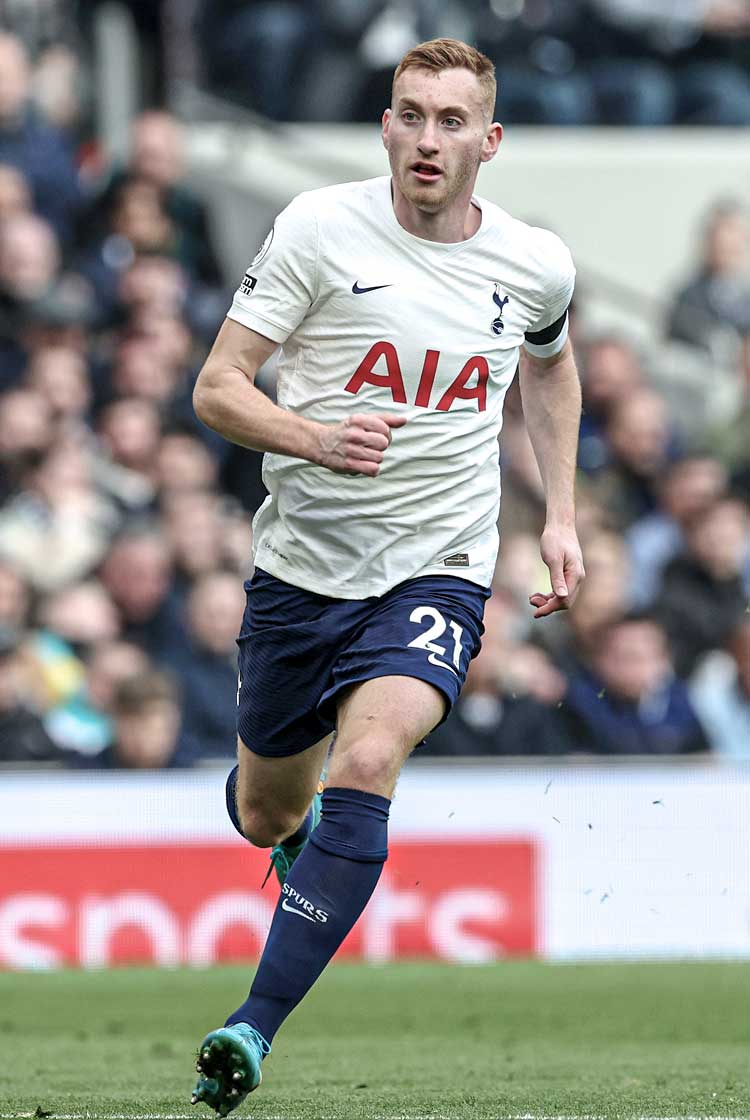 There was significant overhaul in the Tottenham midfield in January 2022. Antonio Conte sold Dele Alli to Everton and sent Giovani Lo Celso, Tanguy Ndombele and Bryan Gil out on loan, while Dejan Kulusevski and Rodrigo Bentancur were brought in from Juventus. It was a big roll of the dice from Conte, who wanted to stamp his mark on the Spurs squad. To make so many changes mid-season came with a great deal of risk.

The gamble paid off, though, with Kulusevksi – just 21 at the time of the move – hitting the ground running and striking up a devastating relationship with Harry Kane and Son Heung-min in the Tottenham attack. Kulusevski has quickly taken some of the burden off Spurs’ two star players, and Conte insists he can get even better.

"We are talking about an important prospect,” said Conte. “Probably he could explode in the future. Also, because I can see the intensity, the will and the desire to play. Every day in training sessions he is a type of player who has in his mind the target to become a top player in his career.”

Kulusevski is a versatile, left-footed attacking midfielder who can play wide on the right or centrally, and provides both a creative and goalscoring threat. His greatest strength is his ability to carry the ball forward at pace and drive his team up the pitch. The timing of his touches encourages defenders to try and poke the ball away, but Kulusevski can react to quickly move the ball past them. As a result, he can pick up momentum as he progresses forwards with the ball.

He has the ability to beat opponents through dummies and feints, particularly when on the right side of the pitch. Able to change direction quickly, he can decelerate quickly and turn back before making a pass with his left foot. Closer to goal, he creates shooting opportunities for himself by pushing the ball past his opponent and shifting his weight quickly. He has a strong preference to cut inside on to his stronger foot, and is skilled at pushing the ball out of his feet before wrapping his left foot around the ball to cross or shoot with minimal backlift. However, he can also disguise a touch across his man with his left foot, before shooting or crossing with his right (below), which makes him even more difficult to defend against. As left-footed players go, Kulusevski is comfortable with his weaker right foot.

Kulusevski is most effective in front of goal when positioned in the inside right channel, pushing the ball towards the centre of the pitch before shooting. He is calm and composed when shooting, using the inside of his foot to bend the ball outside the far post. His controlled technique means he can get enough curl on the ball to bend it back inside the post, which makes his shots difficult for goalkeepers to reach. Kulusevski is also comfortable moving into the centre of the pitch or making diagonal runs across the front line to get into better goalscoring positions.

Through his brilliant close control, he creates himself crossing opportunities, preferring to cut inside before delivering an inswinging cross with his left foot. He generates good whip on his deliveries, but also an impressive amount of dip that can help avoid central defenders. Often, he targets teammates who have made a run on the blindside of a defender (below), dropping the ball in behind the opposition back line. These crosses are particularly impressive because he often takes them from very close to the penalty area, but gets enough height on them to beat defenders. He will often target a particular teammate rather than a zone, too.

When he moves the ball from left to right across his body, he then drives towards the byline before cutting the ball back or hitting a low ball into the middle. If he hasn't created himself enough space to cross, he will then cut back again and cross from a standing position with his left foot. In these situations, his teammates are forced to check their runs. It is naturally more difficult to then find them, but he will often look to fizz a pass in to their feet.

When central, Kulusevski creates chances through quick combinations in tight spaces and deft passes. His off-the-ball movement creates space, and he uses third-man runs effectively to help his team break through opposition blocks. He is also able to receive with his back to goal and draw defenders out of position, before targeting the space in behind. His creative passes are most effective when he disguises them and finds gaps in crowded areas (below). Naturally, these passes are very hard to pull off – but Kulusevski has the ability to create chances in tricky situations.

Crosses and goal threat from the right

Kulusevski usually featured on the right side of attack in a 4-3-3 during his loan spell with Parma in 2019/20. That season, he registered his best Serie A goal and assist tallies, moving off the flank consistently. With only one centre-forward for Parma – usually Andreas Cornelius or Roberto Inglese – space was readily available in the inside channel for Kulusevski to work off passes into the striker. He combined with the striker before making penetrative runs to receive a return pass, and offer a threat on goal.

For Juventus, Kulusevski benefited from the overlapping runs of right-backs Juan Cuadrado or Danilo. In the 4-4-2 used in 2020/21, Kulusevski had both Cristiano Ronaldo and Álvaro Morata to target with his inswinging crosses. He used the right-back’s runs around the outside create space to cross. Kulusevski sometimes chose to combine with the full-back and tried to get them into position to cross from out wide. Alternatively, he could also look to receive a return ball near the byline.

Under Conte at Tottenham, Kulusevski has thrived on the right side of attack in a 3-4-3, linking up extremely effectively with Kane and Son. The three constantly rotate; as Kane focuses most of his game on dropping to collect the ball between the lines, wide men Son and Kulusevski often make runs in behind.

They co-ordinate their movements so that they run in opposite directions as the ball comes forward. As Kane drags an opposition centre-back into deep areas, Son and Kulusevski sprint into the space that has been created (above). Kulusevski certainly isn’t as quick as Son and so doesn’t provide as much direct threat on goal, but he carries the team up the pitch with his movement both on and off the ball.

Kulusevski’s head coach at Parma, Roberto D’Aversa, sometimes set up with a 4-4-2 diamond, with Kulusevski as the number 10. He rotated regularly with the front two, and often ended up as the highest central attacker. As well as creating from between the lines, he would run beyond the opposition back line when the strikers split.

In Juventus’ 4-4-2 in 2020/21, Kulusevski took up narrow number 10 positions regularly, providing support behind centre-forwards Ronaldo and Morata. With early overlapping runs from Cuadrado or Danilo, Kulusevski moved into central areas ahead of a double pivot, who were positioned deeper with the aim of creating space centrally for Kulusevski. Morata often drifted left, which created even more space for Kulusevski to move infield and combine with the strikers.

At Spurs, Kulusevski moves into central positions to receive vertical passes from the double pivot. This movement off the flank will be combined with a run into a high and wide position from the right wing-back, who will pull the opposition left-back away from the left-sided centre-back. Kulusevski then looks to feed through balls into the gap that has been created for a teammate – usually Son – to run in on goal (above).

Kulusevski has taken to life in the Premier League about as well as any January arrival ever has. The fact that he was only 21 when he moved and had barely played for Juventus in the lead-up to his transfer only makes his impact all the more impressive. As Conte has hinted, there is every chance the young Swede could get better. Tottenham could well reap the benefits of some incredibly shrewd January business.