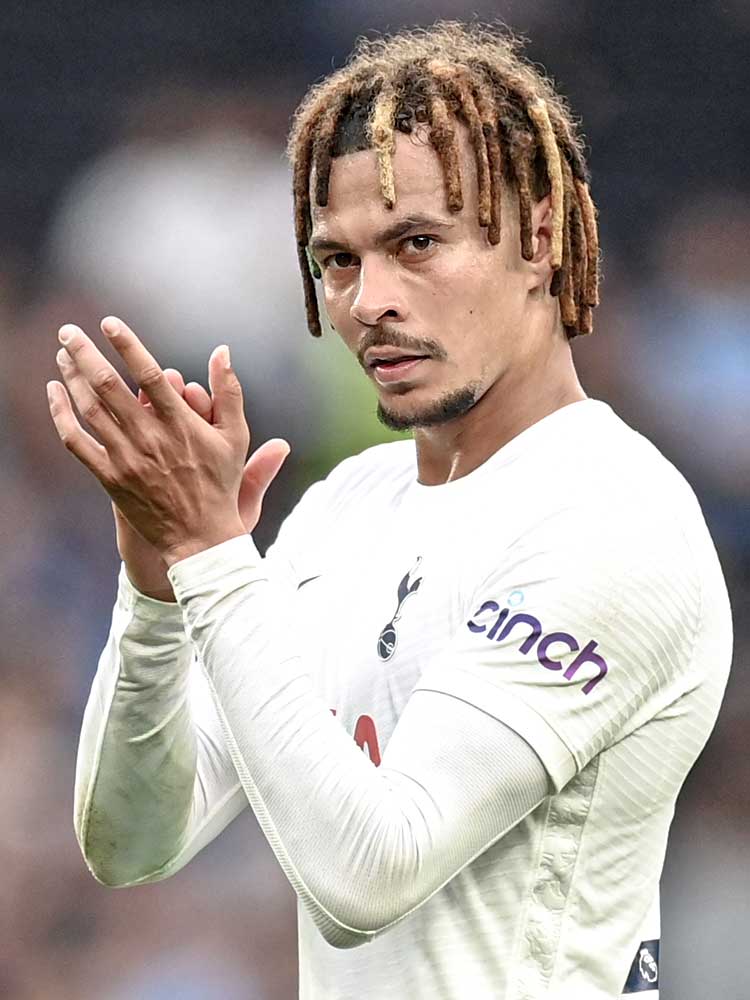 Profile
No player’s form followed the ups and downs of Tottenham’s fortunes quite like Dele Alli's. The key figure in José Mourinho lifting Tottenham’s season after a poor start under Mauricio Pochettino, Alli became the figurehead of Spurs’ renaissance following their change in manager in November 2019. His form declined, however, as they struggled through February and March, and he went on to suffer a lengthy period out of the team under Mourinho throughout the following campaign.

The breathtaking rate at which Alli scored and created goals in his early days at Spurs set the standard against which he is often judged, so when his goals dry up, he is often perceived to be playing badly. Despite injury problems and some doubts about his consistency, however, Alli has largely remained valued by Spurs' managers, and aged 25 enterting 2021/22 he is potentially entering what could be his prime.

Tactical analysis
Alli’s versatility is one of his greatest strengths, but it has also become something of a weakness as he has been shifted around midfield to accommodate others. He is at his most effective in an attacking midfield position, and has been at his most devastating playing close to and combining with a lone striker in Harry Kane.

They quickly developed a good understanding and have provided key passes for many of their partner’s most important goals. Theirs has never the most traditional of strike partnerships, but the combination of Kane’s lethal finishing and Alli’s clever movement has caused problems for many of Europe’s best defences.

Alli recorded 63 goals or assists in his first three seasons in the Premier League, but his form suffered following Russia 2018, and he found himself playing in a deeper position for Spurs than he might have liked. Christian Eriksen was the chief creator and there was no dropping Son Heung-min or Kane, so Alli, who would feature in a double pivot when Pochettino played two in midfield in earlier seasons, would be moved into a deeper role as part of a midfield three.

He could still fulfil many of the responsibilities Pochettino asked of him, primarily because of his understanding of the game and the defensive work he is willing to do. There were also still opportunities to get forwards, but Alli was too often taking the ball in front of opposing midfield lines (below) when he would prefer to be on the other side of them, and posing a more immediate threat on goal.

One of Alli's major strengths is his awareness, and that is what makes him so dangerous in attacking midfield positions. He scans his surroundings frequently to take in as much information as possible and to identify the most dangerous spaces. His positioning tests his opponents – he adopts positions intended to draw his direct opponent from theirs. Should that opponent move towards Alli too early, Alli quickly moves into the free space, or tries to find a pass to a teammate in that area. If they don't follow him, he is left with space to turn (below).

Alli is so comfortable on the ball that he is happy to come deep for possession, but he isn’t the player to create something out of nothing with time on the ball and two lines of defence in front of him – unlike, perhaps, Eriksen – which is part of the reason that his form for England suffered. England had not had an Eriksen-like creator to act as a foil for Alli. The emergence of the young, creative Phil Foden, Jack Grealish and Mason Mount may yet revive Alli's international career if he can regain his position in the same team as one of them.

He instead prefers to play instinctively. He has brilliant close control, can dribble his way out of pressured situations, and scores the vast majority of his goals with impulsive, first-time finishes, often after ghosting forwards in an inside-left position between the right-sided central defender and right-back, or – as he did in scoring his two headed goals in Tottenham’s 2-0 win over the title-bound Chelsea in January 2017 – on the outside of the right-sided central defender. Alli is at his best with the freedom to take those positions, and that is partly why he shone in the early part of Mourinho’s reign.

Role at Tottenham
Mourinho made a point of singling Alli out shortly after his appointment by Spurs. “I asked him if he was Dele or Dele’s brother,” the Portuguese said. “He told me he was Dele. ‘Okay,’ I said. ‘Play like Dele.’” Then, for a period, Mourinho set his new team up to get the most out of him.

Spurs' title challenge in 2015/16, and much of their best football under Pochettino, came in a 4-2-3-1 featuring Alli as their number 10, though he also shone in the 3-4-3 with which Spurs challenged Chelsea the following season. Mourinho swiftly reverted to a 4-2-3-1 and Kane as their lone striker; Pochettino had persisted with two up front to get both Kane and Son as near to goal as possible. Alli’s response was four goals and three assists in the first five fixtures under Mourinho. He had scored just twice, and provided only one assist in his first 10 appearances of 2019/20.

During 2019/20 Spurs recovered from a losing position to beat Olympiakos in a crucial Champions League group stage game. At 2-0 down, Alli scored on the stroke of half-time, and it is arguable that he wouldn’t have been in the position he was (above) to tap in so opportunistically following a defensive error were it not for Mourinho changing his role.

There were more than mere glimpses of the old Alli in those early days under Mourinho, but a player who had developed so much with Eriksen and Kane in close quarters has suffered from the former departing for Inter Milan and the latter’s absence through injury. There have been hints of frustration in his play, with instinctive attempts to press opponents not succeeding when new teammates aren’t doing similarly, as well as him withdrawing into deep positions for the ball when his team are lacking creative inspiration.

Out of possession, Alli was regardless the perfect midfielder for Mourinho – he senses danger quickly and instinctively. In Mourinho’s mid-block, Alli pushed high up alongside the striker and was responsible for screening passes into midfield. His awareness and sensitivity to the most dangerous threats are ideal characteristics for someone deployed in that role. His movement towards the ball and screening responsibilities mean he can dictate where the opposition can and can't play, and he plays a crucial role in cutting off passing lanes to the opposition’s best players. It is no surprise, therefore, that Alli’s best return came when he was back in his most natural position, but with so much competition for places in Spurs' midfield he needs to prove that he is worth persisting with there, and that means producing on a more consistent basis.