Profile
Jack Grealish would have become one of the best footballers ever to be relegated from the Premier League, were it not for his goal at West Ham on the final day of 2019/20. His strike ended up earning Aston Villa the vital point that kept them in the top tier for another year.

However, while Grealish will have been delighted to save his boyhood club from the drop and guarantee another season in the Premier League, there is little doubt that a player of his talent could easily – and might well soon enough – play for a team that challenges at the right end of the table. “Jack wants to play at the highest level and he wants to win trophies,” said Villa manager Dean Smith. “His ability is there for all to see. He has that star quality and has carried the responsibility of being Villa captain.”

Tactical analysis
Grealish is a hugely talented midfielder who loves to get on the ball and always provides a passing option to his teammates. He is not quite a central midfielder, not quite a traditional number 10, and he certainly isn’t a forward. Instead, he thrives when he is given the freedom to move into whatever position he is most likely to find space and get on the ball.

He is given that freedom at Villa – to roam the pitch searching for opportunities to receive a pass and quickly look to turn so he is facing forwards. Opponents often track him when he moves into deeper positions to receive from defence (below), because Grealish is at his most dangerous when he has even the slightest chance to turn and face goal. When he is on the ball his immediate instinct is to drive forwards with purpose, taking his team up the pitch as quickly as possible. Villa are often pinned back by their opponents; Grealish is able to relieve pressure on his team by swiftly putting those opponents on the back foot.

He is one of the best dribblers in the Premier League, with a low centre of gravity and technique that means he is perfectly balanced as he moves the ball with his right foot, and is therefore able to jink in either direction away from his marker. Sometimes it can seem he is moving too slowly and allowing opponents to recover into good defensive positions, but he does this to take advantage of his express change of pace. He waits for the opportune moment to quickly change direction and eliminate his direct opponent by bursting past them before delivering a pass or shot at goal.

He is clearly stronger on his right foot, so opponents try to show him on to his weaker left, but Grealish has worked on the detail of his dribbling when moving on to that left foot – usually on the outside because he tends to play on the left. He moves the ball to his left, just out of reach of his opponent, before quickly straightening up with his next touch. This touch takes his path back towards goal, in such a direction that if he can get his body across the defender he is suddenly the wrong side of that defender, who will often have to resort to committing a foul. Grealish is naturally slightly off balance when he does so; as such, he has become a master of winning free-kicks in those situations, when he needs only a nudge from his opponent to draw the foul. 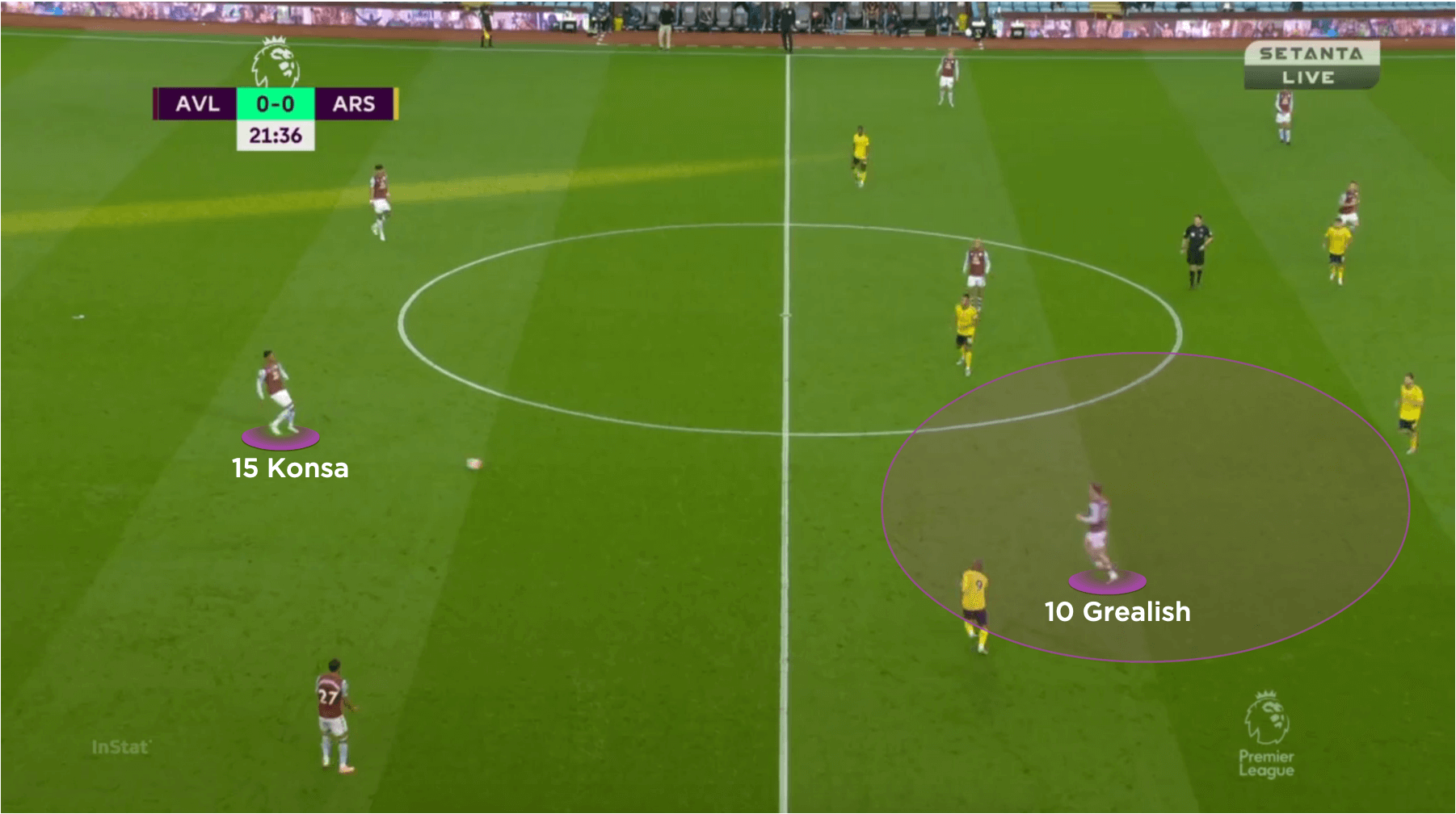 In 2019/20, Grealish set a new record for being fouled the most times of any player in a Premier League season, winning 167 free-kicks at a rate of nearly five per game. Incredibly, he broke the previous record with nine games of the season remaining. There may be times when he goes down slightly too easily, but more than any other player in the league he also gets himself into positions where defenders have to take evasive action.

Role for Aston Villa
Grealish usually plays on the left of a front three for Villa, though he also starts plenty of games in central midfield or as a number 10. Wherever he plays, he likes to drift out to the left and to get on the ball in space on that side of the pitch. 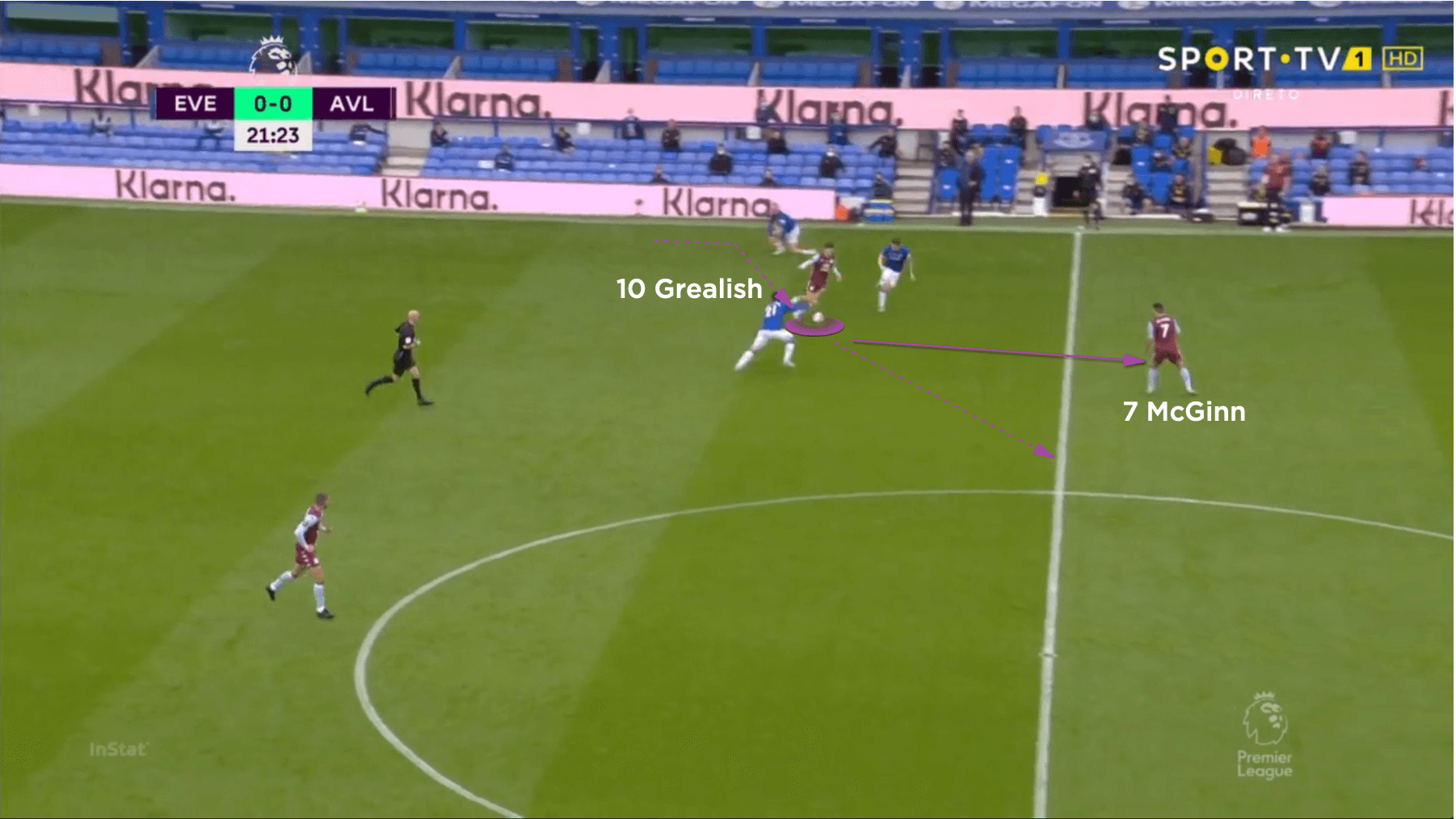 His aim when he gets there is to move off the flank and combine with a central player (above), before looking for a return pass that gets him on the ball and facing goal the wrong side of the opposition’s midfield. This is the position Smith wants to get Grealish into as often as possible – and precisely the situation that Villa’s opponents want to avoid, because it is where he is at his most dangerous.

With Grealish bearing down on a defender, opponents have a big decision to make. Move out and engage him – and risk him skipping past the last line of defence – or keep backing off in the hope that a midfielder can recover and get goal-side of him. Grealish is such a threat that, in those situations, he often draws more than one opponent towards the ball. He is then capable of spotting a free teammate and picking them out – as he did, for example, to set up Matt Targett for the winning goal in the Carabao Cup semi final second-leg win over Leicester, and also to set up the only goal of the game for Conor Hourihane in Villa’s Boxing Day win over Norwich (below). Both proved decisive. 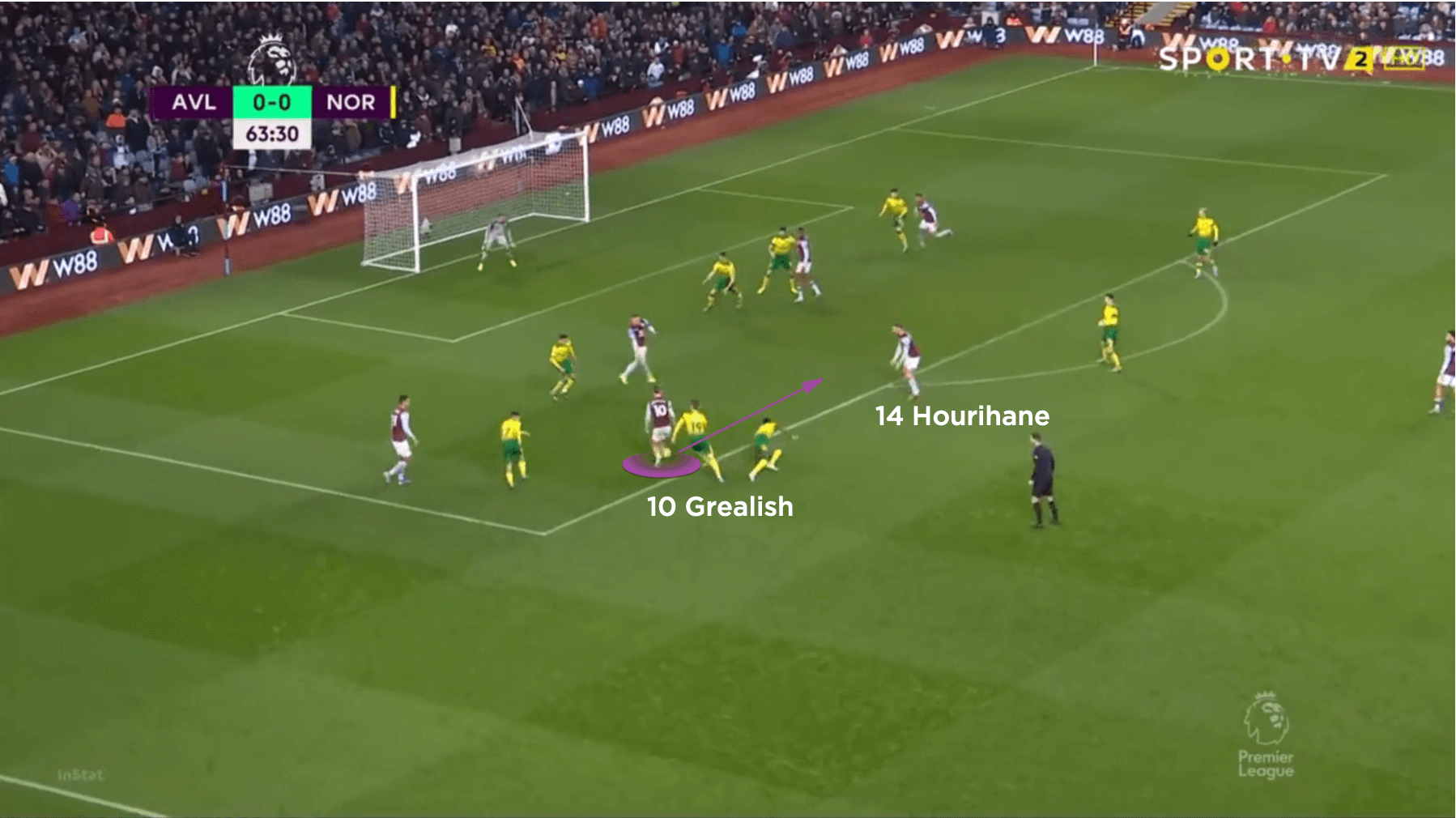 Grealish could, however, improve his shooting in those situations. If he was more of a threat on goal with a shot from the edge of the area, defenders would almost always have to close him down rather than back off. He scored only one goal from outside of it in 2019/20. If opponents had that extra threat to worry about he would be in an even stronger position when charging towards goal, almost always capable of getting a shot off – either from distance, or after beating any defender who closes him down.

Another area in which Grealish can improve is his off-the-ball movement. At Villa he is the talisman, and the player through whom all attacking play goes – but he could use that to his team’s advantage by making more selfless runs that draw opponents away from key passing lanes to other attackers. Improved movement could help make him into an even more effective attacker if he were to make a move to a team that plays at a higher level than Villa.

Grealish is a wonderful player who will keep getting better and has a huge future ahead of him – at international level as well as for his club – wherever he is playing. Villa and Smith should enjoy getting the most of a special footballer. 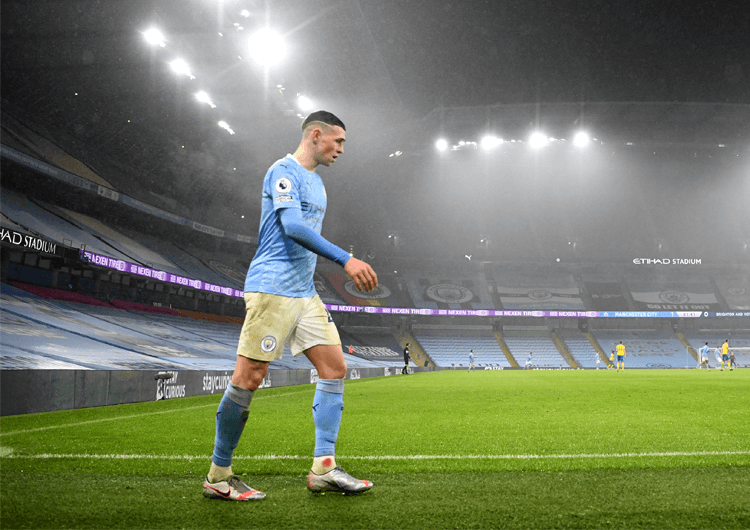 With Phil Foden increasingly receiving more playing time at Manchester City, we analyse the qualities of a player Pep Guardiola describes as "incredible"

Gareth Southgate was named England manager on a permanent basis after a friendly against Spain in November 2016. He revisits that very game