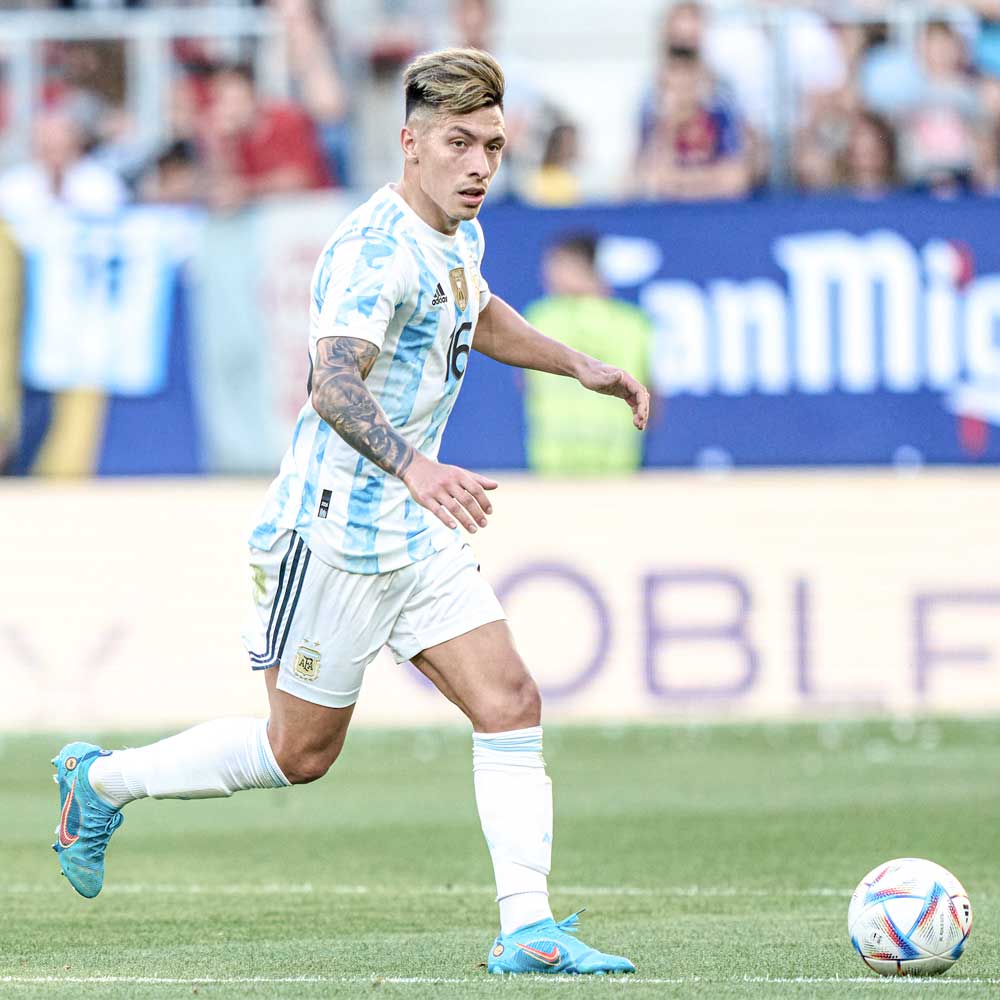 At 5ft 9ins, Lisandro Martínez perhaps isn't the archetypal centre-back. His height is, in fact, one of the first things you might notice about him when he lines up in the centre of defence, sometimes barely any taller than the full-backs alongside him. And yet his technical ability, reading of the game and the crucial fact he is left-footed convinced new Manchester United manager Erik ten Hag to pay an initial £46m – which could rise to £57m – to bring him to Old Trafford.

“He’s a warrior and I think the fans will admire him,” Ten Hag said. “He has a fighting spirit. He brings aggressiveness in the game, in a good way. I think we need that. But also, he’s skilful, he can deal with the ball and he’s left-footed.”

Martínez is a versatile, left-footed defender who has spent the majority of his career in central defence. He does have experience in other positions, though. He featuring occasionally as a defensive midfielder in his first season with Ajax – giving an indication of his technical ability – before sometimes appearing at left-back in the following campaign.

In 2021/22 – his third and final season at Ajax – Martínez was exclusively used at centre-back. Despite his lack of height compared to most other top-level players in his position, Martínez is a good defender. He makes up for his lack of size with extreme aggression when duelling, and he can compete with any opponent using his body. Not surprisingly, he is also consistently strong in the tackle (below).

Martínez is quicker than most central defenders, and he can push off and accelerate forward extremely quickly. This helps him track strikers who make sharp movements away from the centre-backs to drop towards the ball. He also uses his momentum to his advantage when moving out of defence to tackle (below). This can lead to some rash tackles, but more often than not he times them well. This ability to push off also helps when he loses an aerial duel, as he can then turn back quickly after landing to track runners or deal with the second phase after an initial duel.

Naturally, he is often targeted in the air. If his opponent doesn’t cleanly win the first contact, however, Martínez will battle hard to win the second ball. He is also effective when reacting to second balls after a teammate has competed for a ball in the air. With others around him often more suited to fighting for the ball in the air, Martínez’s ability to cover behind his teammate, his defensive instinct and his reading of the game are all of huge value.

It is on the ball, however, that Martínez stands out most. He breaks lines consistently with his passing, and is able to play passes to facilitate his team building around the opposition. On top of that, he is able to penetrate with diagonal passes over the top into the space in behind. He also has the ability to dink passes over the opposition’s midfield line and into the left inside channel in front of the opposition defence, to find a teammate positioned between the lines. He stabs the ball with minimal follow-through; this allows him to generate enough height to break over the opposing midfield unit, but guarantees enough control that the ball then drops down quickly.

When positioned higher – against a low block, for example – this technique is useful to penetrate beyond the opposing back line. Such passes can drop in for a forward who is running in behind to control the ball over their shoulder, and thus put a player clean through on goal with one direct pass (below). Martínez’s ability to accurately drop the ball into a tight space means the teammate running in behind doesn’t need to focus on curving their run as much, and can spend more time watching the pass. The weight of this particular type of forward pass from Martínez is superb.

Martínez can also break lines via his vertical passing along the floor, where he usually focuses on the left inside channel. From the left side of central defence, he can fizz a pass past the left-back to find the winger, or he can punch vertical passes through lines to finding a forward-running number eight, a number 10 between the lines, or an inverted winger. He has not demonstrated a consistent ability to break lines with dribbles, but he can shift the ball from side to side and play clever reverse passes to find gaps in the opposition’s midfield line. That is yet another string to his bow.

Throughout 2021/22, Martínez played on the left side of central defence in Ten Hag’s 4-3-3 structure. He was predominantly paired with Jurriën Timber, but also partnered Perr Schuurs on occasion. Martínez’s aggressive defensive style helped Ajax squeeze up the pitch with a high line to support their high press. One key feature of this was Martínez jumping into midfield to add an extra body should the opposition try to overload Ten Hag’s central midfield three.

When the opposition built in wide areas and Ajax dropped into a mid-block, Martínez was still keen to jump out and compete, usually in the left inside channel. Timber or Schuurs then acted as cover behind Martínez, with left-back Daley Blind  or Nicolás Tagliafico happy to move out with Martínez to press. Left winger Dusan Tadic worked back to screen forward passes. The deepest of the central-midfield three had to stay deep (above) and remain aware that Martínez could be pulled too far out of position. In that situation, they should be ready to cover in central defence.

Martínez’s ball-winning ability after pushing out from defence was honed during his time playing as a defensive midfielder for Ajax in 2019/20. As Ajax pressed high, Martínez was free to push out further up the pitch to try and disrupt the earlier stages of the opposition's build up.

That season, Ten Hag also used a double pivot in a 4-2-3-1 shape, which meant Martínez had even more licence to press higher, duel and engage high up the pitch. Tadic dropped from his centre-forward position, with the wingers attacking centrally in a similar way to those at Liverpool. However, instead of the left-back pushing forward behind or around the winger, Martínez often moved out and provided an intense counter-press should possession be lost.

Martínez was exceptional in this role, and helped lock the play near the touchline. The skills he picked up in his aggressive, pressing, double-pivot role has certainly helped him become a more effective defender. Though he isn’t what you might typically expect of a modern centre-back, he has lots of the attributes to make him a success at Premier League level.