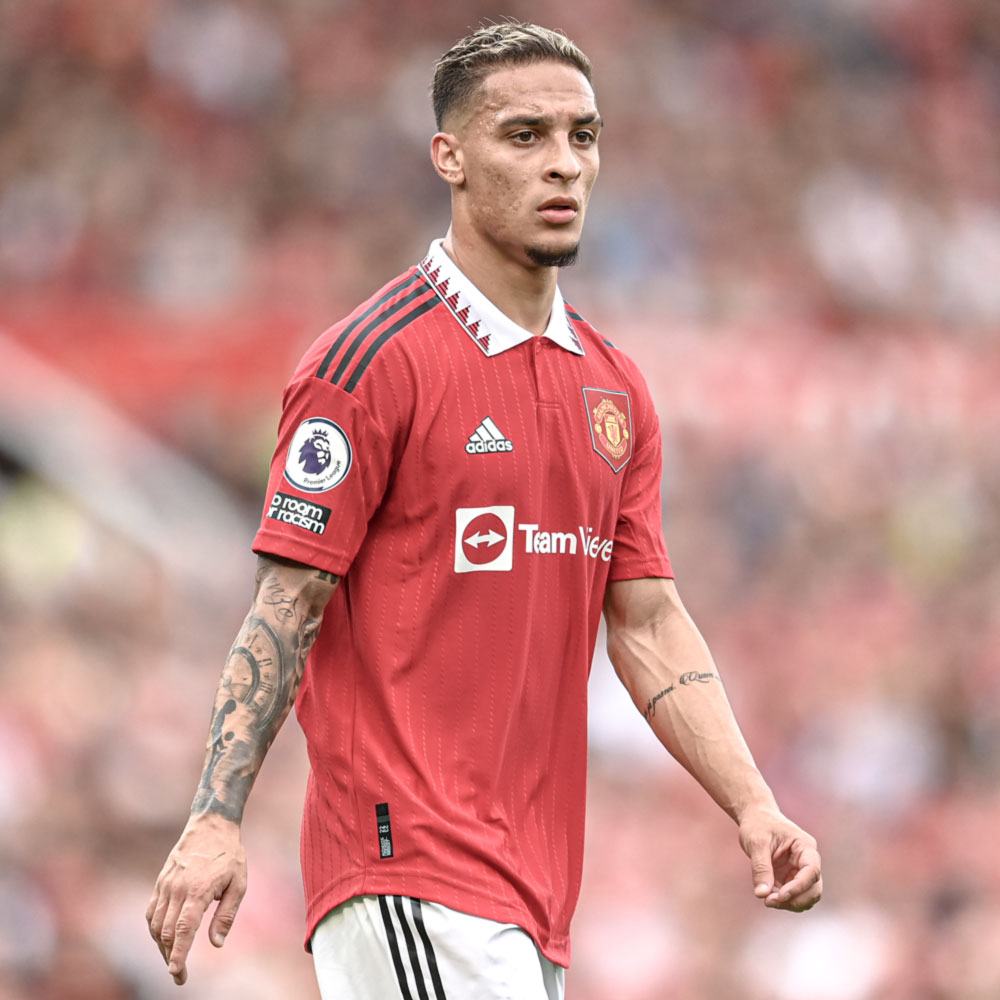 Following the big-money arrivals of Lisandro Martínez and fellow Brazilian Casemiro, Antony became the third – and most expensive – South American to sign for Manchester United in the summer of 2022. In a deal worth a potential £85m, United brought the 22-year-old to Old Trafford from Dutch champions Ajax, to reunite not just with centre-back Martínez, but also manager Erik ten Hag.

A youth product of São Paulo, Antony signed terms with Ajax the day before his 20th birthday. He went on to enjoy two successful seasons in the Netherlands before following his old boss to Manchester. “You can see all of his potential,” said Ten Hag after Antony scored in a 3-1 win against Arsenal on his debut. “He will be a threat in the Premier League. Jadon Sancho and Marcus Rashford can play on the right, but they prefer the left so now we have the missing link who can play well on the right.”

Antony is a left-footed winger who plays from the right side and whose natural instinct is to attack inwards on his stronger foot. His dribbling from this side can be effective; here, he uses multiple short touches to manipulate the ball away from his opponent and any incoming challenge (below). His wide starting position can help detach an opposing full-back from the rest of their back line, creating space to dribble into. He attacks inside in a similar way to Riyad Mahrez, shuffling slowly before combining a drop of the shoulder with an explosive change of pace.

As full-backs have worked to force him outside by pressing from in to out, Antony has adapted his game to deliver low crosses with his weaker right foot. Here, he disguises a touch inside before breaking around his opponent to play across goal or cut the ball back. Opposing full-backs will inevitably continue to show him on to his right side, so he could look to take a second touch across the line of the defender – especially if an early crossing opportunity isn’t available.

This would allow Antony to beat his man completely and win fouls or even penalties if he has managed to penetrate inside the penalty area. It would also give him an alternative threat when facing full-backs who can match him for speed and acceleration.

Antony as a goal threat

Antony is skilled at using overlapping teammates to create shooting opportunities for himself. He waits for a teammate – mostly a full-back or midfielder – to run beyond, dragging an opponent with them just as he begins to cut inside. When striking the ball on his stronger left foot, he is as comfortable bending and placing it into the far corner (below) as he is going for power across goal. Runs across the penalty area also help take defenders away, leaving him freer to drop his shoulder and get a shot away.

As he has developed, Antony is making more use of underlapping runs from teammates to create shooting opportunities for himself. However, these underlapping runs are often performed through the inside channel – the exact space into which Antony prefers to drive. As a result, he needs to slightly delay his dribble; this can allow his opponent to get tighter and block off his route to goal, possibly with the help of a second defender. If he can add greater variety to his attacks when utilising underlapping runs from teammates, his movements will become less predictable and defenders will have to track the runs as much as they do Antony’s inwards movements.

Although he registered the second-most shots for Ajax in the Eredivisie in both 2020/21 and 2021/22, he didn’t hit double figures for goals in either season. However, he does time his movements across goal well when play is built from the left side, becoming a valuable extra attacker at the far post. From here, he can step inside to finish or drag markers away from central teammates.

Antony is a strong counter-presser who can apply instant pressure on the ball when he or a nearby teammate loses possession. His agility and acceleration both help with this, but he also presses with intelligence – especially when forcing the ball wide with an in-to-out press. He is also more than capable when pressing from behind or working to duel, intercept, press and recover from behind the ball (below). Defensively, he is a consistent source of support to his full-back on the right side.

In his first season with Ajax, Antony attacked from the right within Erik ten Hag’s regular 4-2-3-1 system. Number 10 Davy Klaassen pushed forward to partner centre-forward Sébastien Haller, who joined midway through the season. Dusan Tadic narrowed in from the left, with Daley Blind or Nicolás Tagliafico overlapping from left-back to provide the width. With two central threats in the attack – plus Tadic narrowing further – Antony held his position wide on the right (below). From there, he could use the bodies and movements inside the penalty area to dribble through emerging gaps before combining or shooting across goal.

In the 2020/21 Eredevisie season, Antony ranked joint-fifth for assists – and it’s not difficult to see why. When driving around to cross, or looking for players to combine with, the movements within the 4-2-3-1 shape provided him with multiple passing options to create chances for others – especially with Tadic so regularly narrowing from the left. Inside movements and underlapping runs from regular right-back Noussair Mazraoui further supported Antony’s wide starting position. This created another option for Antony, who could run off the ball in behind, or rotate inside to support central numbers in the box.

In Antony’s second season as an Ajax player, Ten Hag utilised a 4-3-3 more. The Brazilian still attacked from the right side, but now wide movements from the number eights provided a different kind of support and allowed him to receive in behind after making more penetrative forward runs (below).

Support around and underneath the ball as it moved wide now came through the number eights and Mazraoui again inverting, which enabled Antony to cut inside once in the final third. However, with fewer central numbers and more space for him to dribble into, his assists dropped. His goal return remained almost identical, though, as he continued to cut inside and shoot towards the far post, or make runs across the box.

The support of the number eights through the inside channels, as opposed to the more central focus of the number 10 in his first season, did allow Antony to combine around the outside of opposing full-backs more. Here, he showed the deft passing skills not always evident in the final third when he prioritised dribbles and forward runs. From here, he could make secondary movements across the opposing back line and receive between the lines – giving him access to dribbling opportunities in more central areas and the ability to target opposing centre-backs much more.

Having rejoined the manager under whom he thrived for two seasons at Ajax, Antony looks like a player ready to make his mark on the Premier League. After some difficult recent times at Manchester United, the Old Trafford faithful will hope he proves worth his lofty price tag.