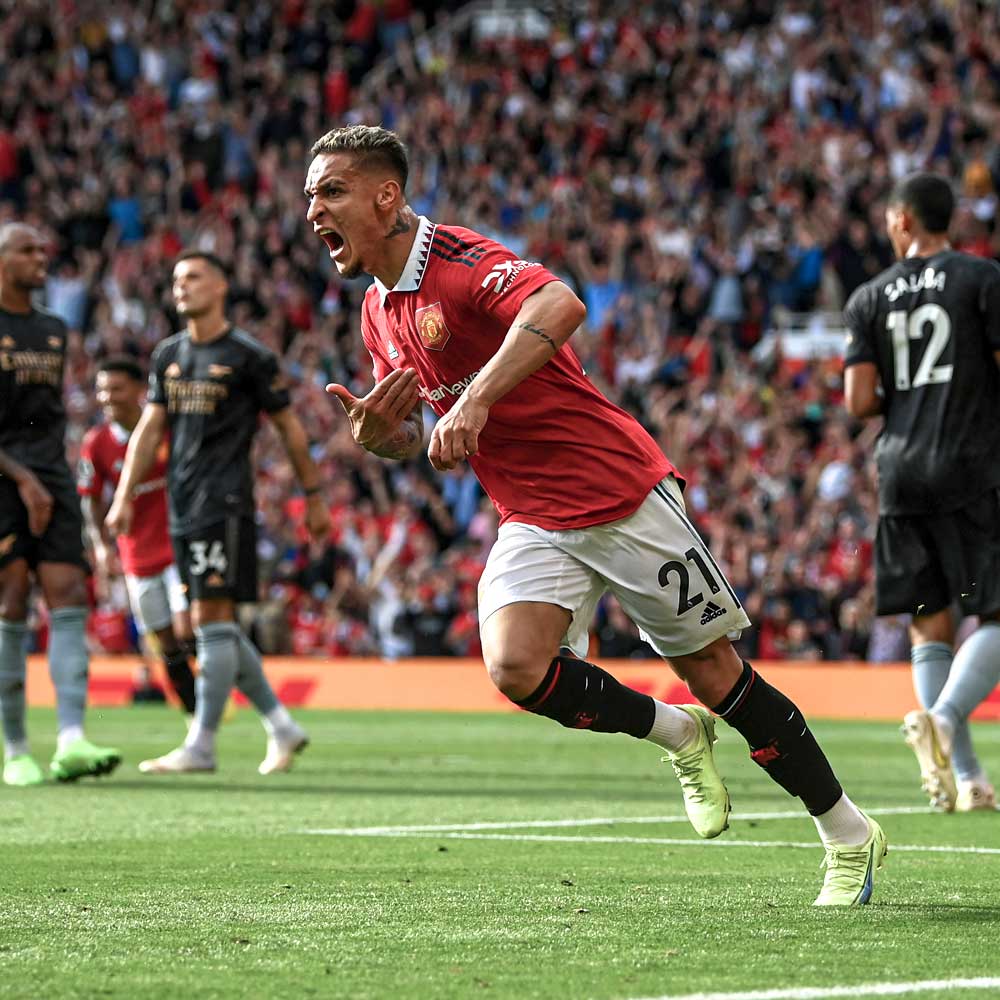 Arsenal retained their position at the top of the table, having won their first five games of the season prior to this match, but the gap to second-placed Manchester City is now just one point. United, meanwhile, moved into the top five, having been bottom after two games. Ten Hag remains adamant that his team is still a work in progress, though.

“I understand fans are dreaming, the standards of Manchester United have to be good,” he said. “[But] we’re at the start of a process, we’re still far away, we have to do things much better than we do. We have to do this together every day, bring those high standards to training. We live those high standards and values, and when you show discipline in that you create a winning culture. That is what we have to work for. I’m not thinking we’re there, but we’re on our way in a good direction. We have to keep this process going.”

Manchester United were set up by Erik ten Hag in a 4-2-3-1 structure, and pushed numbers forward early on. Christian Eriksen moved high through the left inside channel from his starting position in the double pivot, and supported Tyrell Malacia’s overlapping runs while Jadon Sancho moved inside. Diogo Dalot and Antony attacked as a pair on United’s right, but Antony generally held the width before looking to cut back inside with the ball. Marcus Rashford dropped into a number 10 position alongside Bruno Fernandes (below) as often as he ran beyond Arsenal’s back line. Despite a very strong start, though, committing numbers forward left Scott McTominay and the two centre-backs with large spaces to cover during defensive transitions. As a result, Arsenal often threatened on the break.

When Eriksen remained deeper, United looked more solid on defensive transition and limited Arsenal’s previously effective counter-attacks. His ability to receive on the half-turn and play forward also gave the hosts a stronger presence in central midfield, to occupy the spaces between and around Arsenal’s front line. With Fernandes and Rashford then working to receive between the lines, Anthony and Sancho could concentrate on pinning back the Arsenal full-backs (below). The wide players were then ready to attack inside once the ball had been worked across the pitch. Their opening goal was scored by Antony after the ball was moved quickly from left to right.

Arsenal dominated possession throughout the game, meaning United’s best attacking threat came through direct counter-attacks. After Cristiano Ronaldo was introduced as the single centre-forward, Rashford moved wide; he and Sancho then provided instinctive, bending runs inside Arsenal’s full-backs (below). With Ronaldo dropping short to further disrupt Arsenal’s shape, Rashford’s pace was a threat in behind; he ran on to a superb pass from Fernandes to restore United’s lead after Bukayo Saka’s equaliser. Following that goal, the hosts dropped into a lower block, forcing Arteta and Arsenal to chase the game.

Rashford’s second and United’s third goal all but sealed the three points immediately after Arteta had made a host of changes. Fred had replaced Sancho for United, meaning they defended with a central midfield three, and Arteta responded by reducing the numbers in Arsenal’s back line and going more attacking. The extra player in United’s central midfield gave Eriksen licence to run forward off the ball and support direct runs from United’s forwards (below). He and Rashford broke beyond the Arsenal defence – in which there were now huge gaps – to score United’s third.

Arsenal also used a 4-2-3-1 formation and, although they started slowly, they soon found their feet and consistently dominated possession. Oleksandr Zinchenko moved inside from left-back and Granit Xhaka moved wide, to often leave Albert Sambi Lokonga as the single pivot. This disrupted United’s man-marking approach on that side, while Gabriel Martinelli looked a constant threat in behind (below). Gabriel Jesus was an impressively effective target man when Arsenal went more direct, bringing Bukayo Saka into the game down Arsenal’s right.

Arsenal locked the hosts into their own half for considerable periods. Xhaka moved forward early, allowing Zinchenko to move inside as a second pivot ahead of what was now a temporary back three (below). Xhaka’s movement moved Scott McTominay out of position and allowed Martinelli to attack 1v1 against Diogo Dalot, with large spaces to try and exploit. Martin Ødegaard provided something similar for Saka on the right by moving out of the number 10 space. Jesus dropped to add further central passing options for Arsenal; the Brazilian dominated the hosts’ centre-backs for long periods.

Limited success down the right

Ben White and Saka were often isolated in possession on the Arsenal right (below). With Jadon Sancho consistently recovering back to support left-back Tyrell Malacia, Arsenal had little joy down that side. Although Saka scored Arsenal’s equaliser, that goal came from Arsenal regaining the ball high up the pitch before Saka and Jesus penetrated the hosts’ back line. That was the only time Arsenal really threatened down the right.

Mikel Arteta made several attacking changes in response to Erik ten Hag reinforcing United’s central midfield with Fred’s introduction. Arsenal no longer had any central-midfield overloads or influence between the lines to cause United the issues they earlier had. Arteta moved to a back three, with Martinelli and Saka providing the attacking width, but now without the support of a full-back (below). Eddie Nketiah was added as a second centre-forward so that Arsenal occupied both of United’s centre-backs, supported by a three-man midfield of Emile Smith Rowe, Xhaka and Fábio Vieira. However, with less defensive presence and fewer players underneath the ball following a United regain, these changes almost instantly backfired. Rashford scored again to give United a crucial two-goal cushion, and the three points were sealed.