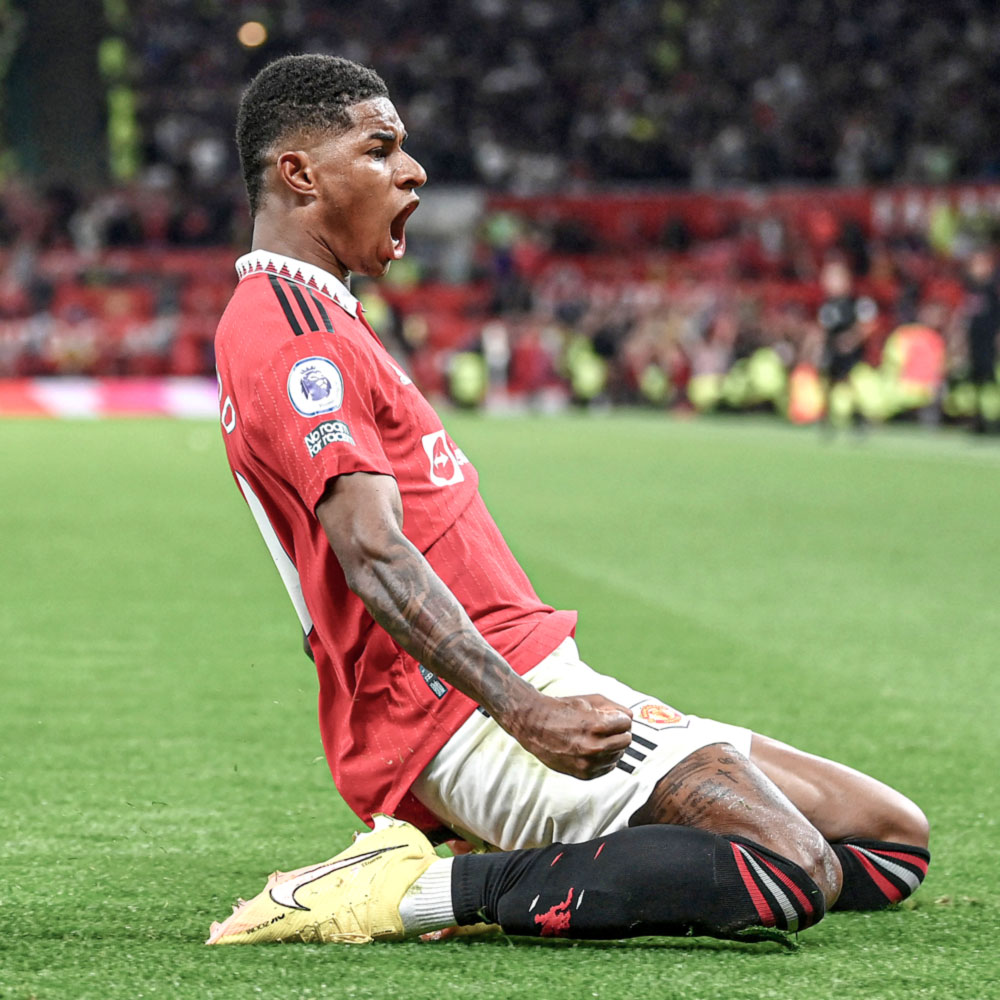 Erik ten Hag registered his first competitive win as Manchester United manager in particularly sweet fashion, with an impressive 2-1 win over fierce rivals Liverpool in front of a raucous Old Trafford crowd. United were quick out of the traps against surprisingly sluggish opponents, and it was no shock when Jadon Sancho fooled James Milner, Virgil van Dijk and Alisson to slide home the hosts' opener just past the quarter-hour mark. Marcus Rashford, who often finds his goalscoring touch against Liverpool, doubled the United lead early in the second half with a well-placed finish. The visitors huffed and puffed, but the closest they came to blowing down the United house was Mo Salah's late header. It is the first time in 10 years that Liverpool have failed to win any of their three opening Premier League games.

"I wanted a different approach, a different attitude," said a pleased Ten Hag after the game. "That is what they bring on the pitch, that is what makes me satisfied. We can talk about tactical, but it is all about attitude. We have to keep humble, we can play a lot better if we keep more composure."

Erik ten Hag set his Manchester United team up in a 4-2-3-1 shape, with an attacking midfield three of Anthony Elanga, Bruno Fernandes and Jadon Sancho playing behind Marcus Rashford. The hosts pressed Liverpool very well, mostly from a mid-block but with intermittent spells of higher pressing. Upon any midfield regains, United targeted the spaces in behind with early forward passes, utilising the pace of their front line and offering a constant threat. They penetrated the central gap in between Liverpool centre-backs Virgil van Dijk and Joe Gomez (below) on a number of occasions, with the visitors’ back line often disorganised at the moment of transition. Sancho, Rashford, Elanga and Fernandes all threatened with direct runs in behind, with the advanced positioning of Liverpool’s full-backs meaning secondary cover was largely unavailable.

United regularly built long from David de Gea, rarely allowing Liverpool to establish the high-pressing dominance they so often look to. Whenever United targeted their wide attackers, avoiding the aerially strong Liverpool centre-backs and covering central-midfield trio, Fernandes often moved across to support the first contact (below). The double pivot of Christian Eriksen and Scott McTominay were always ready to compete for any second ball, while the rest of the front line would rotate, disrupt and run forward, looking to exploit the gaps between and beyond Liverpool’s high back line. This was most evident between Rashford and Sancho towards the United right.

Ten Hag introduced Anthony Martial for the second half. The French striker played down the middle, with Rashford moving to the left in place of the withdrawn Elanga. United continued with the direct forward passing they had used to such good effect in the first half, with Liverpool’s usually strong covering second line often unable to stop access into the front line (below). Martial connected well by dropping to pull one of Liverpool’s centre-backs out of line, connecting into Rashford and Sancho moving beyond, or widening to allow central runs from United’s wide attackers. From his starting position as the number 10, Fernandes also drifted wider on occasion, pushing Sancho and Rashford higher. Liverpool’s attacking line looked disorganised and ineffective, failing to cover underneath the ball as the lines behind them were forced to transition into defence.

United often avoided Liverpool’s central counter-pressure with one or two quick passes before switching out to their wide full-backs (below), thus avoiding having to play into their double pivot in tight central areas. Direct forward passes from Diogo Dalot and Tyrell Malacia then targeted the spaces around the Liverpool back line, with willing runners stretching around and beyond the visitors’ full-backs. Rashford and Sancho continued to break forward well, still supported by curved runs across and in behind from Martial. Fernandes then supported around the withdrawn double pivot, who remained deeper to protect against any central losses of possession. Ultimately, the threat United posed on the counter proved enough to claim a huge first victory of the season against disappointing opponents.

Lack of threat in behind

Jürgen Klopp set Liverpool up in their familiar 4-3-3 structure, with Roberto Firmino starting as the centre-forward but dropping into midfield (below). Jordan Henderson started as the single pivot but moved across to support Liverpool’s wider build-up, which was often forced there by their opponents’ aggressive outward press. At least one of Liverpool’s number eights, James Milner and Harvey Elliott, would attempt to break forward in support of their attacks. However, with Mo Salah often holding the width on the right and Luis Díaz narrowing – often in deeper positions to support left-back Andy Robertson – Liverpool lacked meaningful threats both between the lines and especially in behind. Manchester United centre-backs Lisandro Martínez and Raphaël Varane were rarely threatened, as a result.

Liverpool began to dominate the ball, but without really threatening David de Gea’s goal – so United increased their pressing intensity higher up the pitch. They maintained their aggressive mid-block but also looked to jump forward, with one of the double pivot always looking to cover Firmino’s dropping (below). Rashford moved across to press the Liverpool centre-back on the ball, with Alexander-Arnold and Robertson both pressed by the United winger on that side. Fernandes covered Henderson but would also jump forward on to Liverpool’s spare centre-back, with Sancho then narrowing. Alternatively, Sancho jumped forward, with Fernandes screening around Henderson in midfield. Either way, Liverpool struggled to develop any meaningful possession in the face of United’s intense and organised pressing.

Struggles in the final third

Before the changes midway through the second half, Liverpool continued to lack any real threat when attempting to penetrate the United back line. Salah remained very wide and rarely tested Malacia, who defended him well 1v1, inside. Firmino continued to drop deep, but often too far away from the final third to have any serious impact – and when he did push higher he was often isolated and lacking options around the United back line (below). Isolated runs from the Liverpool midfielders were well managed by the hosts, usually tracked by the double pivot. Further back, the visitors’ second line of midfielders and full-backs failed to offer adequate cover behind the ball. This left United free to continue to exploit the space in behind them on the break.

Klopp eventually introduced Fabinho in central midfield, with Elliott now widening to the right side during Liverpool’s sustained possession. Trent Alexander-Arnold then pushed much higher, with Salah moving into a more central position and finally influencing the spaces around the hosts’ centre-backs (below). Díaz also narrowed from the left, allowing Robertson to overlap, while Firmino, now acting as a 10 underneath Salah, continued to drop into midfield. Despite Liverpool now having more effective possession, their open-play chances were limited, with the hosts dropping into a compact low block to see out the game. Fábio Carvalho, on for Milner, attacked between the lines. Rotating off the left, he did add a brief spark to Liverpool’s play, and contributed to the late Salah goal that ultimately counted for little more than consolation on a desperate night for Liverpool.