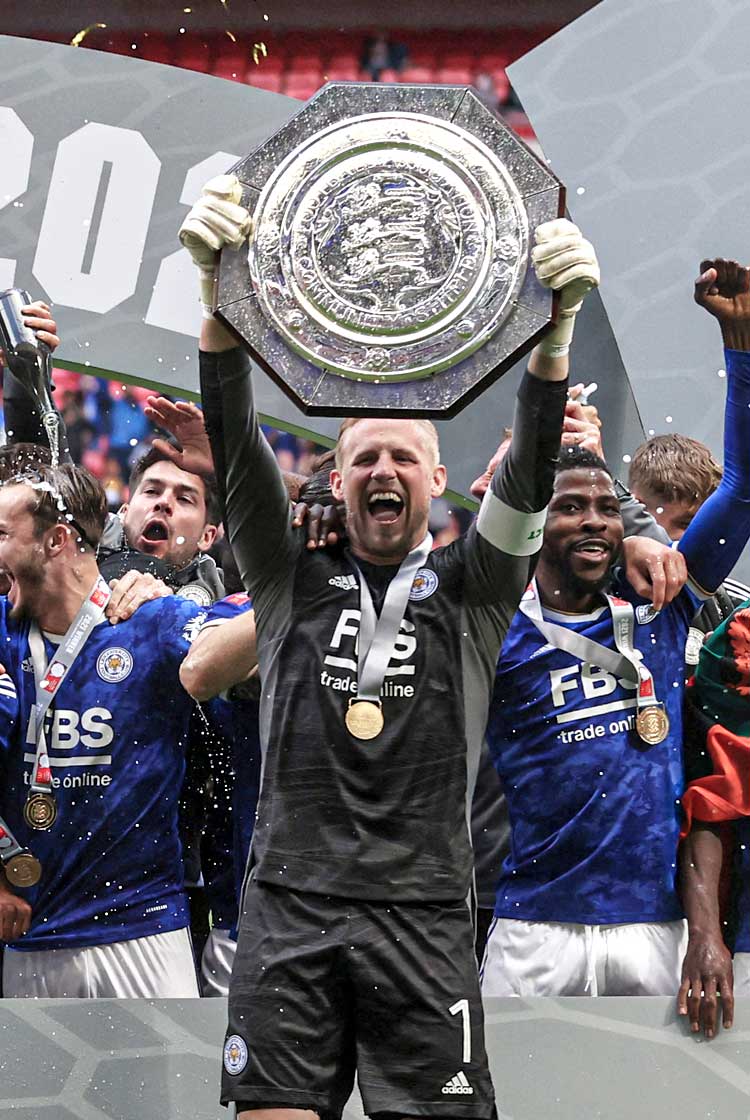 An 89th-minute penalty from former Manchester City striker Kelechi Iheanacho earned Leicester the first silverware of the 2021/22 season, as Brendan Rodgers' side won the Community Shield at Wembley. City manager Pep Guardiola fielded a weakened side in the new campaign's curtain-raiser, but new £100m signing Jack Grealish did make an appearance from the bench. He was, however, unable to help his new team find a way through an obdurate Leicester defence, and they held firm before scoring a winner from 12 yards late on after Iheanacho was fouled inside the penalty area by Nathan Aké. “There was a great feeling coming here today,” said Rodgers. “Every Leicester player, fan, staff member coming here, it was a really special feeling. We wanted to take that into the game and thankfully we've done that.” “Congratulations to Leicester,” said Guardiola. “I am more than satisfied with how we played. Many things were really good and the young players were excellent.”

Leicester were set up in a 4-2-3-1 by their manager Brendan Rodgers, playing out from the back against Manchester City’s high press. When Leicester had prolonged periods of possession, City dropped back into an out-of-possession 4-4-2 shape, with 19-year-old Cole Palmer jumping forward from midfield to put pressure on Caglar Söyüncü. City centre-forward Ferran Torres then moved onto Daniel Amartey, and City’s wingers pressed Leicester’s full-backs. Palmer also had to screen access into Wilfred Ndidi in midfield when he jumped forward, and when he succeeded, City’s press initially stopped Leicester playing through the middle channels.

Harvey Barnes pinned João Cancelo back on Leicester’s left side, with James Maddison and Ayoze Pérez then moving through the inside channels, and playing through them proved particularly effective when they received direct passes from a defender, especially when Maddison found space in the space Palmer had vacated when he moved forwards to press. From here, left-back Ryan Bertrand overlapped around Barnes, who dribbled infield dangerously from his wide left starting position. This route gave City plenty of problems throughout the game.

City centre-back Rúben Dias eventually started following Maddison when he dropped in to support Leicester’s deeper build-up play, especially when he was targeted with aerial passes over City’s press. However, Leicester then sped up their passing into Perez and Maddison and also looked to penetrate beyond the City defence to find Jamie Vardy running in behind. This quicker and more direct passing helped break beyond City’s high defensive line time and again, and their best chances came via this route. Vardy and Barnes were a constant thread in behind, and Nathan Aké had to sweep across on several occasions. Vardy came closest to putting Leicester ahead, after a quick break forward ended with Barnes crossing for Vardy, whose volleyed effort was tipped onto the post by Zack Steffen.

Whenever City dropped into a mid-block, Maddison's movements into deeper positions in the left inside channel also helped Leicester progress on their right, as the double pivot of Youri Tielemans and Wilfred Ndidi moved to the right to create space for Maddison. With Perez then narrowing to take up a number 10 position, right-back Ricardo Pereira pushed forward to give Leicester width. Direct passes towards Pereira gave Leicester another method of reaching the final third.

Leicester slightly adapted their play in the second half. Fernandinho covering behind Palmer lessened Maddison’s influence in the left inside channel, so Tielemans pushed forward into the number 10 slot.

They ended the match attacking in a 4-4-2, with Kelechi Iheanacho and summer signing Patson Daka up front and providing wider runs in behind, dragging City’s centre-backs out of shape. Leicester grabbed a late winner as Aké’s mistake on the ball inside the penalty area gifted them a penalty, with Iheanacho converting to secure another Wembley win for Leicester and Rodgers.

Pep Guardiola set Manchester City up in a 4-3-3 with Fernandinho as the single pivot in midfield. Leicester pressed with a very narrow shape, led by Jamie Vardy and James Maddison, plus Ayoze Pérez when needed. The two number eights – Ilkay Gündogan and the teenager Cole Palmer – took up slightly higher positions to stretch Leicester’s midfield unit. Ferran Torres dropped from his centre-forward slot to offer another central passing option. As Torres dropped, Palmer then moved even higher, attacking on the inside of Riyad Mahrez, who took up a very wide position on City’s right, aiming to exploiting any gaps left by Wilfred Ndidi when he moved out to engage the ball.

When facing Leicester’s mid and lower blocks, City patiently built out of defence, with Leicester converting into a midfield four as Barnes and Pérez dropped into deeper positions. Both of City’s full-backs tucked inside, which narrowed Leicester’s midfield unit further. Wingers Samuel Edozie and Mahrez held their width, and build-up around Leicester’s midfield line proved the most successful method of forward progression for City. City’s high pressing also gave them another method to break into the final third, with Palmer jumping forwards and Fernandinho organising things behind him.

However, when Leicester defended deep, unless City’s wingers could beat their direct opponents or the number eights could penetrate through the inside channels via runs off the ball, City struggled to create chances. Attempts to find Edozie in behind often ended in mistimed passes, and the youngster struggled to cut back inside onto his right foot as a result.

City adapted their build slightly with Benjamin Mendy moving inside but in a position slightly higher than Cancelo on the right. Cancelo would help form a temporary back three, with Gündogan moving out to City’s left, creating better access into Edozie out wide. Mendy then offered underlapping runs forward when possible to attack inside Edozie, and looking to exploit the space behind Pereira. However, despite City progressing around Leicester on the left, they still struggled to test Kasper Schmeichel. Mahrez blasted over after an incisive break away in what was City’s clearest opening.

Jack Grealish was then introduced on City’s left with Rodri coming on as the single pivot and Fernandinho moving slightly higher. Bernardo Silva and Ben Knight were also added to the attack, as Pep converted his team into a 3-2-4-1 shape in attack. Their left side continued to provide the most threat, with Grealish’s dribbling helping City progress and with Silva’s energy taking defenders away. City were unable to break through Leicester’s block, though, and their back line totally dominated inside the penalty area.