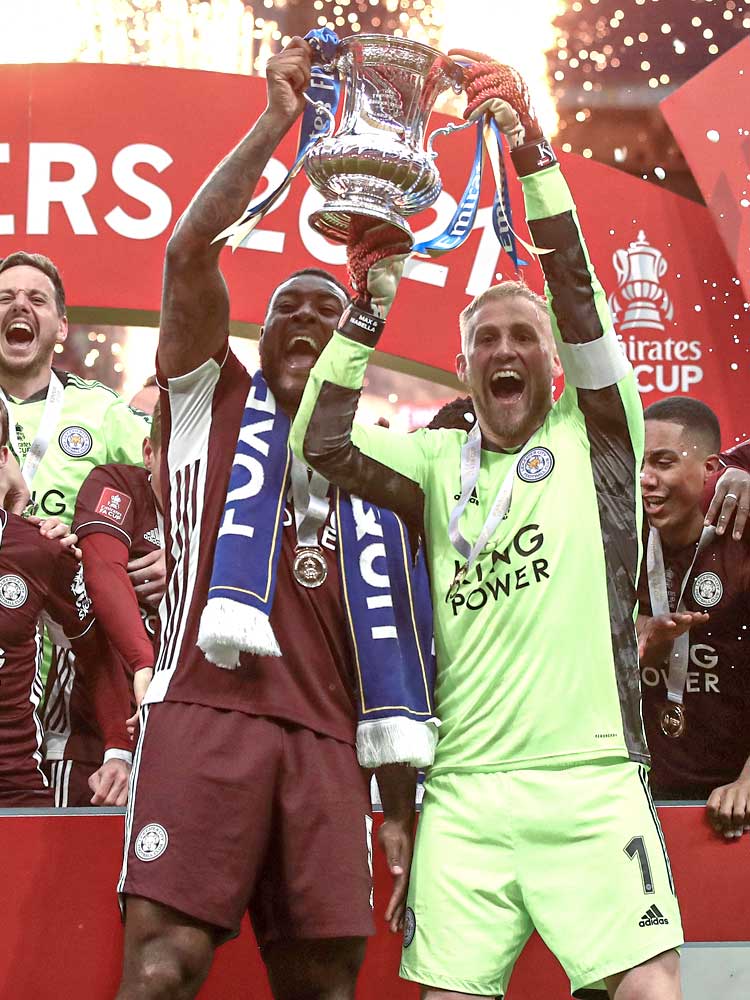 Youri Tielemans produced a superb strike in front of 21,000 supporters at Wembley to deliver the FA Cup for Leicester for the first time in their history and to write the latest chapter in his club's modern-day fairytale. Champions League finalists Chelsea, so often irresistible since Thomas Tuchel's appointment as their manager, were widely considered the favourites, and yet it was Brendan Rodgers' team that triumphed – also doing so after two crucial saves from Kasper Schmeichel and Chelsea experiencing what would have been an own goal from Wes Morgan being ruled out for offside. "We were aggressive; our pressing was good," Rodgers said. "We looked a threat and we know Youri can do that. To score a goal of that level in a game like this, it was a classic FA Cup final-winning goal." Tuchel said: "We defended very well. We were very aggressive on the counter press; we defended high up the pitch; did not allow any counter-chances for one of the most dangerous counter-attacking teams in Europe, and we did not allow any half-chances or any chances. I was absolutely happy with the work-rate and intensity."

Chelsea were organised by their manager Thomas Tuchel into a 3-4-3 formation in which Jorginho retained a slightly deeper position in central midfield, narrowly behind N'Golo Kanté, and Reece James featured as their right-sided central defender in an attempt to negate Jamie Vardy's threat at transitions. Their opponents, Leicester, defended with a 5-3-2.

César Azpilicueta and Marcos Alonso provided Chelsea's attacking width from wing-back, so Mason Mount and Hakim Ziyech dropped into the inside channels. Chelsea's front three regularly rotated and dropped to towards the ball and into the spaces that existed between the lines; Mount and Ziyech received passes that drew Leicester's wider central defenders out of position and also operated closely together to combine, and Timo Werner sought to attack the spaces in behind and targeted a more direct route to goal.

Leicester's press prioritised preventing Chelsea's back three from playing into Jorginho and Kanté, even as the latter moved deeper, but with Chelsea's front three making the movements they were and Werner complementing them by also withdrawing into deeper territory, Tuchel's team continued to progress possession via direct switches of play and diagonal passes from their wing-backs and into their front three. Ayoze Pérez remained uncertain over whether to press James, so the inside right channel also offered Chelsea, and more direct passes to Werner and Mount, potential. if Leicester's back five retreated during moments of transition, Chelsea, similarly, were encouraged to advance.

Combinations in the central areas of the pitch helped Chelsea to resist Leicester's increased willingness to press there. Jorginho remained withdrawn, but Kanté advanced, often to alongside Ziyech and Mount, contributing to the creation of wider combinations beyond Leicester's midfield line in the inside channels where their wing-backs advanced to, and providing Werner with a further option for combinations in the centre.

After Leicester scored they made personnel changes and adopted a deeper 5-4-1 led by Vardy. With James Maddison and Ayoze Pérez therefore covering many of the spaces Chelsea were progressing through, Callum Hudson-Odoi was brought on to feature as their right-sided wing-back and Kai Havertz replaced Jorginho, ensuring Kanté became their defensive midfielder and that Havertz attempted to rotate with Mount and fellow substitute Christian Pulisic through the inside channels.

By targeting wider combinations around Leicester's compact low lock and  committing numbers to the final third, Leicester's goalkeeper Kasper Schmeichel twice denied them. They also had a goal ruled out for offside.

Brendan Rodgers set Leicester up into a 3-4-1-2 formation led by Jamie Vardy and Kelechi Iheanacho. Chelsea defended against them with a 5-2-3, via César Azpilicueta and Marcos Alonso withdrawing into defence.

There were occasions when either Iheanacho or Vardy would withdraw to alongside Ayoze Pérez, operating as their 10, and into the rignt inside channel, where they sought to receive possession alongside Chelsea's double pivot. As a front three Chelsea's pressed Leicester's central defenders, and their wing-backs took their opposite numbers. It was when one of Chelsea's two central midfielders advanced that one of Leicester's central defenders was capable of accessing whichever of Iheanacho or Vardy had moved. Increasingly, it became Iheanacho who did so and Vardy who remained advanced.

With Chelsea's wider central defenders moving to press and prevent their opponents from turning, spaces existed for direct passes to be played through or over their defence – Leicester's wing-backs often did so via crosses. A central midfielder also remained withdrawn to attempt to provide cover against direct passes, so either Mason Mount or Hakim Ziyech moved to replace him in central midfield, presenting one of Leicester's central defenders with increased time and space with which to feed Iheanacho or Pérez.

Rodgers' team, regardless, lacked numbers ahead of the ball and in the spaces that could stretch Chelsea's three central defenders. The increased possession they had rarely led to an increased attacking threat; instead, it prevented Chelsea from controlling the ball as they had, and contributed to a subtle shift in momentum, overall.

Early forward passes from Youri Tielemans to Vardy as he ran in behind were possible because Tielemans adopted positions outside of Chelsea's central midfielders, particularly towards the right, where with the presence of substitute Marc Albrighton and Iheanacho's positioning testing Antonio Rüdiger they posed their most consistent threat. It was from Tielemans' superb strike, following Pérez cutting out a forward pass, that Leicester took the lead.

James Maddison was then introduced, and Pérez moved to the right inside channel, as they attempted to protect their one-goal advantage. As a consequence, they became limited to attacking via direct balls to Vardy, but the striker was consistently overloaded by Chelsea's three central defenders as he chased them.