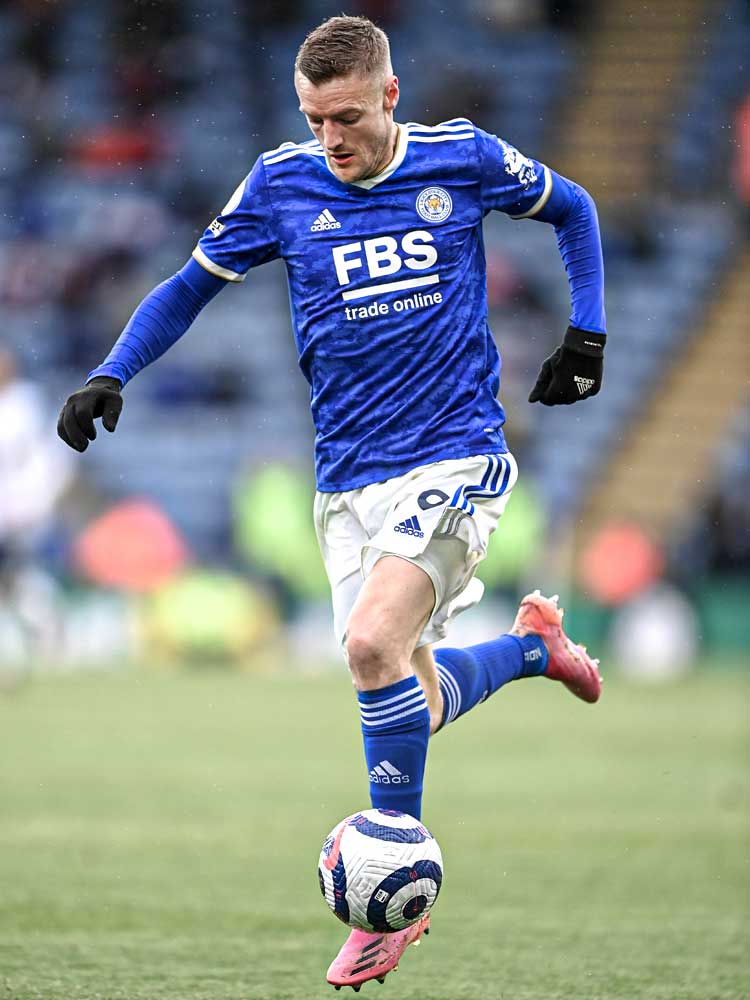 Profile
At the age of 33, Jamie Vardy became the oldest player to win the Premier League golden boot, scoring a total of 23 goals in 2019/20 to beat closest challengers Pierre-Emerick Aubameyang and Danny Ings. A particularly productive October, November and December 2019 – which included a run of 11 goals in eight league games and a hat-trick in Leicester’s record-equalling 9-0 victory at Southampton – had put the consistent and prolific striker on course to be named the Premier League’s top goalscorer for the first time.

Vardy provides the focal point of a team Brendan Rodgers has set up to play to his strengths. Through the talented support act of, among others, James Maddison, Ricardo Pereira and Harvey Barnes, they have continued to get the most from a figure who inspired Leicester to the 2015/16 Premier League title.

Tactical analysis
Vardy’s movement is one of his greatest strengths. He is a predatory number nine who is always looking to burst into spaces in behind defences (below) or on the blindside of an opposing central defender. When his team progresses into the final third with possession he will quickly latch on to the furthest central defender and position himself between that central defender and the relevant full-back. If the ball-carrier has space to advance into and a pass can be played into Vardy’s path, he will have given himself more chance of reaching it than the defender.

If defenders are square on – through both shoulders facing the opposition’s goal – they will struggle to turn and sprint against an attacker already on the move into the territory behind them. Vardy’s pace, particularly over the first 10-15 yards, makes him one of the best in those situations. The threat he poses forces defenders to concentrate on reading the ball-carrier’s body language, and those defenders might decide to move into a side-on position just as the ball is released – similar to the one Vardy takes when he begins to accelerate. Even if the defender does so and can compete with Vardy over a short distance, they will often lose sight of him when they turn. Whichever body shape the defender adopts risks presenting Vardy with an advantage.

If an opposing manager uses a low block to reduce the chances of Vardy getting in behind, the range of his finishing abilities provides him with an alternative route to goal. The variety in his shooting makes him one of the best finishers in Europe; he can shoot accurately and powerfully with both feet.

He also poses a threat in the air, because his explosive leap and the timing of his jumps means he can compete with far bigger central defenders (below), and he benefits from the fact that opponents often mark his teammates if a cross is being delivered. By latching on to full-backs or drifting into the spaces between opponents he can again gain an advantage – this time in the air.

Role at Leicester
Vardy’s 23 Premier League goals during 2019/20 came from a variety of situations and demonstrated how versatile a player he is. The introduction of Video Assistant Referee (VAR) technology had the potential to negatively affect someone who relishes being on the shoulder of the last defender, but he still managed to outscore every divisional rival.

Changes to Leicester’s approach have helped. Maddison started 2019/20 playing largely as an attacking, left-sided midfielder, encouraged to drift inside to invite overlaps from left-back. As the season progressed he played more centrally as a number eight alongside Youri Tielemans and inside the more natural winger selected on the left – often Harvey Barnes. Vardy’s movements therefore evolved over the course of the season; he increasingly drifts towards the ball to offer a short passing option, particularly when Barnes and Ayoze Pérez are used in wide positions.

When he does so, he can set a pass off a single touch (above), often leading to combinations with a third player. Barnes and Pérez play more like inside forwards than does Maddison, and they are more likely to make diagonal runs into the penalty area, moving ahead of Vardy as he withdraws to build play. With Maddison or Tielemans – capable players who can deliver through balls between defenders – in possession and facing towards goal, Vardy turns and sprints towards the penalty area to offer another option, often for a cut-back.

Maddison and Tielemans drawing defenders towards them from those positions – because they both pose a threat on goal from distance – benefits Vardy, who can then attack the spaces a defender vacates. If one of Leicester’s wingers advances around an opposing block, the other winger and a central midfielder join Vardy in the area to add a further goal threat and, perhaps more importantly, to take defenders away from their team’s most clinical finisher (below).

A harsh criticism of Leicester’s 2016 title-winning team was that they were too one-dimensional, and similar observations existed around their disappointing 2016/17 season.

After a strong start to 2019/20, challenging Liverpool and Manchester City proved well beyond them, and they ultimately fell just short of Champions League qualification, but there is little doubting the quality or variety of their play. They are a well-rounded team that gets the most from Vardy at almost every opportunity.