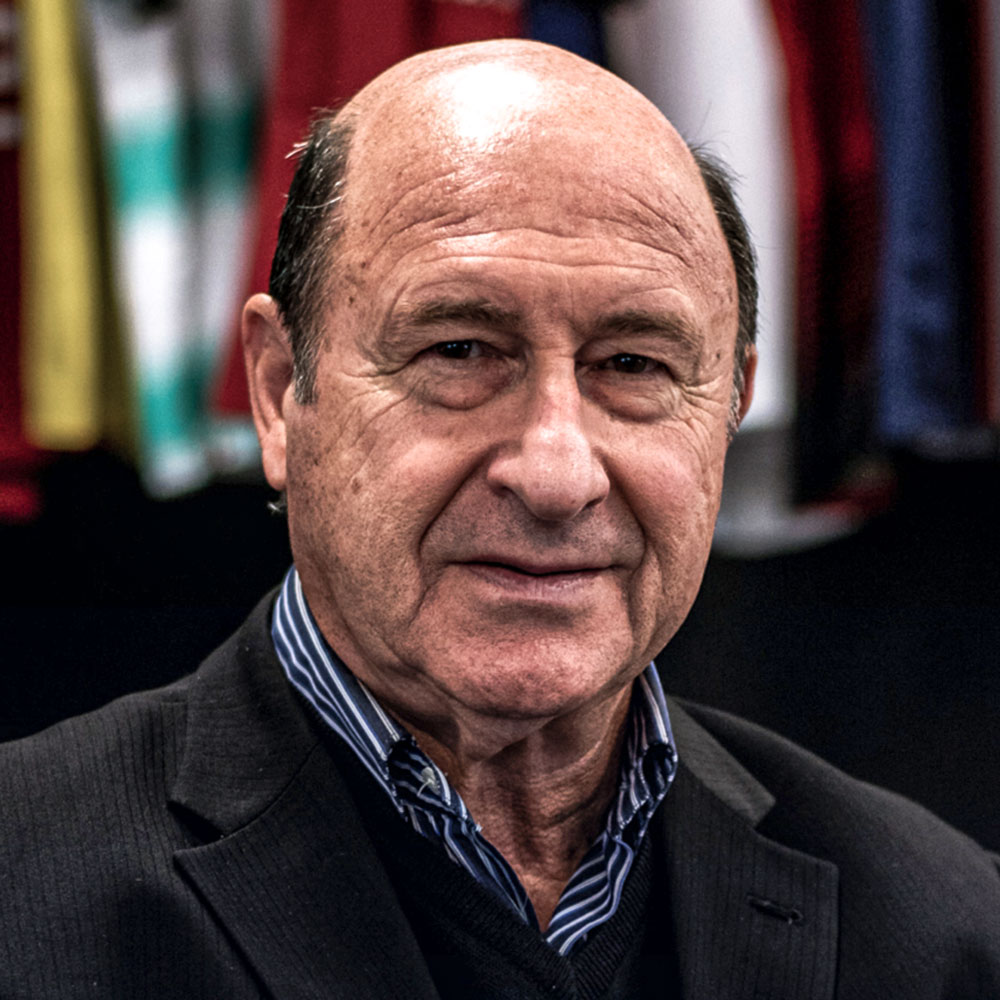 “Xavi is one of the few who came close to perfection”

In almost 30 years at FC Barcelona, I became convinced that the most important thing in football is individual concepts.

Everything a player contributes, he contributes to the team. A team doesn’t work if the players don’t optimise their performance. I sincerely believe that we should start from these individual fundamentals, with each coach’s own idea – be it more or less offensive-minded, more direct or more about combinations.

Working at Barcelona, as both a coach and a member of the methodology department, I decided, along with my son Ferran, to create a company to advise both footballers and coaches: Go Up Players.

The initiative was born in January 2007, but it has its origins many, many years before.

I joined Barcelona in 1970, at the age of 16. Two years later, Laureano Ruiz arrived at the club. He was a coach who was way ahead of his time. He completely changed the way we understood the game and was a huge influence on many of us.

Laureano instilled in us a series of concepts and fundamentals that later, when I finished my time as a professional player, came to mind. In almost 20 years as a youth coach at Barcelona, I dedicated a lot of time to everything that I learnt from him.

Laureano changed many things, but there is one thing that identifies him most: the rondo. The rondo is not the whole game, because the goal is missing and, you could say, there is also a lack of direction of the game. But it is fundamental.

"the unthinkable pass is important, because deception in football is fundamental"

The method of work was as follows: first the rondo, then positional games, conditioned games, and finally the match.

But the fundamental concepts of the game are there, in the rondo. It has the physical elements of footwork, body shape and movement. There are also technical elements, such as the use of both feet, inside or outside, driven or cushioned passes, playing short or long, ball control.

And tactical elements, too, such as raising the head, deciding which is the best option at any given moment, having support on both sides and ahead of you. The solution is often simpler than it seems. It lies in playing face to face with the teammate closest to you.

These are all behaviours that are basic and fundamental in football. Then, it’s a question of choosing which is the best option at any given moment.

All these elements that I have described must then be put into practice in positional games, in situational games and, of course, on the big stage: the match itself.

Laureano Ruiz (above) also taught us the ‘unthinkable pass’. You are probably wondering, what is that? Well, an unthinkable pass is when you direct the game to one side, knowing that you will play to the other side. This is important, because deception in football is fundamental.

We always say, for example, that defenders should recover and reorganise quickly and then, if they have time, ‘have a coffee’. For forwards, it’s the exact opposite. It’s about pretending to go at a trot, before changing pace and deceiving their opponent in the final metres. In those metres, every movement is decisive.

"puyol was 30 years old, but very receptive. with great humility, he got down to work"

We consider the collective to be the sum of individual talents and individual contributions. They are what César Menotti once defined as “small partnerships”. That is to say, the relationships between players.

These small partnerships are what gradually lead to collective play.

It is very important that each player understands, depending on the position they occupy on the pitch, what they can contribute based on their talents.

Our first work with a player on an individual level was with Carles Puyol (below).

We started working with him in the 2007/08 season. At that time, Puyol was being questioned, and Barça weren’t working too well as a team either. We found some aspects of his game that he could improve.

He was 30 years old at the time, but he was very receptive. With great humility, he got down to work.

It is not only about what we can do. The player’s self-analysis is also very important, because our ultimate goal – and we always say this to the player – is to help them in whatever they need so that they don’t need us. Even at our level of coaching, sometimes the message can become tired or repetitive. That is not our objective.

We started working with Puyol in December 2007. Five months later, that work was already bearing fruit. He was part of the Spain team that won the Euros, and was included in the UEFA team of the tournament.

That wasn’t because of what we did, however. It was because of what Puyol himself did. He was the artist of his achievements, but his improvements came about because he was receptive and humble.

Another familiar name we have a relationship with is Xavi Hernández. Our paths crossed for the first time when Xavi was still a child. He was 13 years old and already playing for Barça, and I was a coach.

We worked together for four years. It was the beginning of a relationship that has grown closer over time.

We identify the Barcelona style as a partnership of players, characterised by possession and circulation of the ball, and positional play. At 13 years of age, Xavi was already a master exponent. If all went to plan, he was destined to be a starter in the first team.

If I’m honest, I never thought he would play football as well as he did. Because I think Xavi is one of the very few players who have come close to perfection in football.

One year before he left Barça, Xavi called us and asked us to help him and his staff for the next challenge: becoming a coach. We spent a year and a half with him and his team.

"cruyff taught us that you shouldn't have to suffer on the pitch. you must enjoy it"

There are two things I remember from those moments. The first was when Xavi asked me: “Where do I start with the players?”

I was surprised that this was the first question he asked, but it’s not an easy thing for new coaches to do. I told him to start by greeting them and introducing himself as the new coach.

The second thing he asked me was if being a head coach was very complicated. I told him that what he did on the pitch as a footballer was the truly complicated thing.

But I had experienced the same feelings as Xavi in 1984, when I became Barcelona’s youth coach. And so, I am sure, did Johan Cruyff (below), who left Ajax to come to Barça as head coach in 1988. That was a drastic change.

Cruyff taught all of us in the coaching team at that time that you shouldn’t have to suffer on the pitch. You have to enjoy it.

We all went on to ask ourselves the obvious question: “What can we do to get the ball?” This was translated into reality by Johan – not only in the first team, but also in the whole of grassroots football.

"we help the player understand the game. we never contradict their coaches"

To develop this idea, we had meetings with Johan – but also with Angel Vilda, his physical trainer and the man who delivered his message. Johan had very clear ideas and the strength to implement them, and he did it calmly in the first team. A three-man defence, goalkeepers playing as sweepers, the team occupying the entire midfield, open play on the wings.

“To dominate the game, to have the ball, we must get the ball back when the opposition has it,” Cruyff told us. “We do not steal the ball, because stealing is for cowards. Stealing is taking something that belongs to someone else.”

Johan taught us these ideas. Our job was to put them together into a package of impressive, effective concepts. Pep Guardiola (below) is someone who picked up those concepts brilliantly: “Make your opponents run.”

My son and I are working with three players in their early 30s. As with Puyol, it’s never too late to learn. You have to learn a lot of things through your football career, and it doesn’t matter how old you are.

The key for us is to help the player understand the game, and never to contradict their coach. We are coaches ourselves, and we have enormous respect for the figure of the coach. The first thing we tell any player we work with is that we will never say anything against their coach.

Our aim is to complement the tactical aspect that the player has at their particular level. We will help them to understand the game better, so that they can do better what their coach wants them to do.

"we guide the coach from an external, neutral point of view. we have no ulterior motives"

Michael Jordan used to say that when you move away from concepts and fundamentals, you move away from success. We work on generic concepts that have nothing to do with a style or system of play. The objective is for the player to decide what is best for each match circumstance.

In the end, if the player understands the game, they will make better decisions based on what they have to contribute to the team. They will also be able to guide their teammates. This is the step to leadership.

When a player feels like a leader, they feel like a member of a collective but with the ability to command. This is an invaluable help to a coach.

When we work with coaches, we always ask them a first question: “What is your idea? If we can help them in any way, then we will do it.”

That’s what we did with Xavi in his transition from player to coach – and with Jaime Lozano (above), with whom we have also worked. We were with Jaime in the build-up to the Olympic Games in Tokyo, where he managed the Mexico team that ended up winning bronze.

When it comes down to it, we have to be objective. We make a full analysis of the team as a whole, but we also look at partnerships within that, and individual analysis depending on the characteristics of each player in their position.

We offer our vision on all of those fundamentals, and we guide the coach from an external, absolutely neutral point of view. We have no ulterior motives.

At the end of the day, this is about individuals wanting to better themselves. It’s about being a better footballer, or a better coach.

That is what I learned at Barcelona, and it is what I continue to apply now, with the good fortune of having my son by my side.