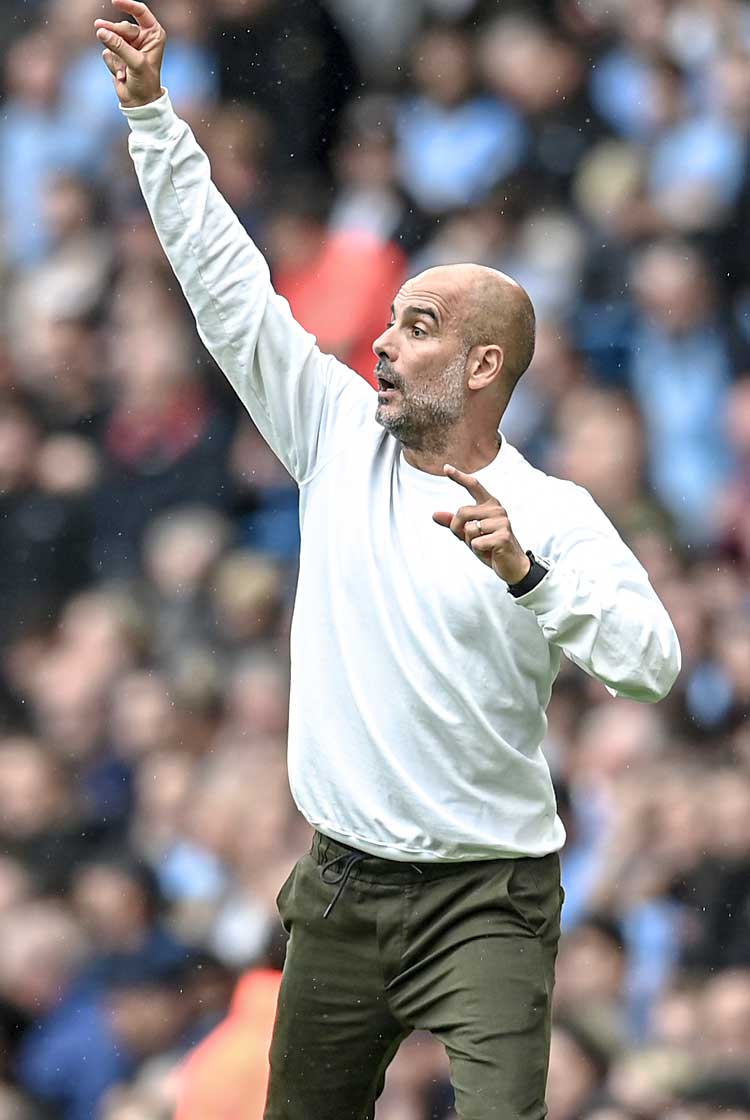 What is positional play?
Positional play, also known as juego de posición, is a principle of play in football that many of the world’s top coaches adopt. When a team uses positional play, the players take up positions to attempt to create numerical advantages in passing triangles or diamonds, in the hope of progressing possession through the thirds. All players in the team must follow strict rules about the positions they take up in relation to the their teammates, the opposition and the ball.

In one particular use of positional play – that promoted by Pep Guardiola – the pitch is split into zones (below). The model uses vertical and horizontal lines on the pitch, with each player assigned to a zone. There should never be more than three teammates on any horizontal plane, and never more than two on any vertical plane, in order to create passing options for the player in possession. Players need to be ready to move based on the movement of a teammate. This creates constant rotations that aim to disrupt the opposition.

Positional play applies to any part of the pitch, from goal-kick restarts and midfield play to the attacking half and the final third. The intention remains the same throughout – to create space and several passing options for the ball-carrier. The precise tactical requirements will vary depending on the area of the pitch and exact intentions of the coach.

Where does positional play originate?
It was through Rinus Michels’ ideology at Ajax that the principles of positional play first appeared, and Johan Cruyff developed those ideas at Barcelona. Through these two coaches, the Dutch idea of Total Football was brought to life. But it was Guardiola, a student of Cruyff, who transferred positional play to the top of the modern game. The Manchester City manager has enjoyed vast success using it.

What are the in-possession responsibilities of a team that uses positional play?
The aim of any team using positional play is to forge at least one of three types of superiority: numerical, qualitative and positional. Numerical superiority is an overload in any area of the pitch. Qualitative superiority is when a player who is superior to their direct opponent isolates them in a one-on-one situation. Positional superiority involves getting players into positions between or behind the opposition lines, where they are more likely to have time and space on the ball and are thus more likely to affect the game. Any player in a team using positional play must always strive to achieve one of these three types of superiority.

Positional play works to enable teams to progress the ball forwards through the creation of triangles or diamonds that give the ball-carrier space and several passing options at any given time. Then, by drawing an opponent towards the ball, a player will free up a teammate elsewhere to receive the next pass.

Players must use the whole width of the pitch when their team is in possession, to create as much space as possible in the centre of the pitch. They must also be aware of where they should be and where their teammates are, so they can adjust their position constantly. Off the ball, players must take up positions that provoke the opposition into movements that open up passing lanes for the ball-carrier.

Which teams use positional play best?

Pep Guardiola’s Manchester City
City are the best and most successful proponent of positional play. They try to gain a numerical advantage in the first line, through their centre-backs moving wide and the number six taking up a position beyond the opposition’s first line of defence to create a triangle (above). The centre-backs try to provoke the opposition forwards into jumping out to press, in turn creating a passing lane in to the midfielder.

The aim is to get the pivot on the ball. This player is positioned in a central zone, in the hope of then being able to progress play wide to a full-back or midfielder. If the pass to the midfielder is not on, they play to their centre-back partner. They can then drive beyond the opposition’s first line and find a forward pass from there.

In the opposition half, the players occupy positions at different heights. The aim is the same as in the build-up phase: to find a player beyond the next line of defence. The wingers stay wide on both sides to stretch the pitch. Their hope is to get into the space beyond the last line (above).

Luis Enrique’s Spain
Under Enrique – not by chance a Guardiola successor at Barcelona – Spain play a positional game. Their aim is to get their many talented attacking midfielders into positions between the lines to receive (below). While City maintain width and stretch the pitch through their wingers, Spain do so through the full-backs.

What are the benefits of positional play?
When used well, positional play can produce football that is both of exceptional quality and highly effective. It is extremely entertaining to watch and can bring vast success, as Pep Guardiola’s Manchester City side has shown.

Positional play creates vast amounts of space thanks to the players stretching the pitch. This creates space in central areas for players to get on the ball – something many teams struggle with.

Positional play can also lead to lots of opportunities to get players in behind in wide positions. This can lead to passes played across the face of goal, and high-quality chances likely to lead to a goal.

What are the disadvantages to using positional play?
Positional play requires high-quality players able to receive on the half-turn and quickly spot the next pass. Without players of a high enough calibre, positional play can easily fail. The players also need to understand the intricacies of positional play, and precisely what is required of them at any given moment. This means there is a need for players who are capable of understanding a system and implementing it on the pitch. It also requires plenty of time on the training ground, where the players must learn everything they need to.

Systems with the players set up in an expansive in-possession shape can be vulnerable to counter-attacks because there is so much space on the inside of their structure. Possession play requires players able to make quick and long recovery runs, and who are fully committed to the system.

When teams get it right, positional play can be attractive and dangerous. But there is a reason so few teams are capable of achieving it. It is very, very difficult to perfect.