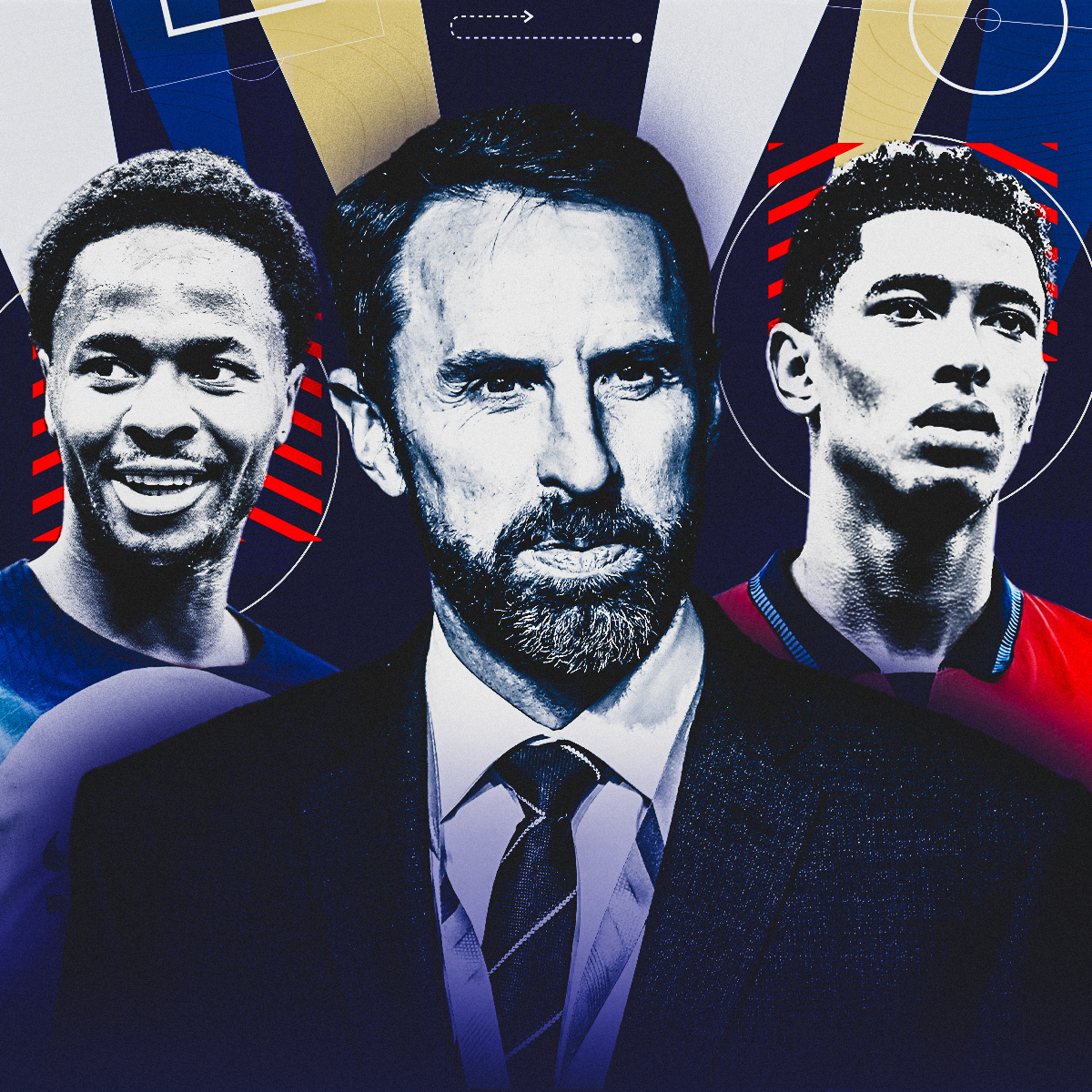 Having led England to the semi finals at Russia 2018 and then the final at Euro 2020 – where they were beaten on penalties by Italy at Wembley – Gareth Southgate will be hoping his team can continue their upward trajectory at major tournaments by going one step further at Qatar 2022.

Southgate has named his 26-man squad – with a few surprise inclusions – for the first ever winter World Cup, so we have produced a detailed preview of the tournament from England’s perspective. We look at Southgate's personnel selections, his tactics, how his team could line up in the group stages, what might change for the knockout rounds, which players could have an impact from the bench, and much more.

England with a back three

England enjoyed great success with a back three at the 2018 World Cup, and Southgate has picked a squad to at least have the option of starting the 2022 tournament with a similar system. Kyle Walker, John Stones and Harry Maguire have proved a reliable back three in the past. Walker’s pace is a huge strength when dealing with balls in behind, as well as cover in defensive transition.

Converting into an out-of-possession back five has helped England manage tournament football without the ball, conceding very few goals from open play in the last two major tournaments. Southgate has used a 5-4-1 and a 5-2-3 (below), with the team dropping into a mid-block. Their aim has been to stop the opposition playing through the centre of the pitch, instead forcing play wide before the central defenders then deal with any crosses. These are all key components of Southgate’s preferred strategy without the ball.

With the ball, Southgate has usually opted for a double pivot regardless of the team’s overall shape, with Declan Rice and Kalvin Phillips his preferred pairing. For Qatar 2022, Phillips has been given every possible chance of proving his fitness, having barely played for Manchester City since joining in the summer. Jude Bellingham’s box-to-box ability, meanwhile, will allow England to build – and also defend – with a double pivot but then convert into a three. He initially starts as a number 10 but roams almost constantly.

Southgate’s most likely starting shape is a 3-4-3, which also uses a double pivot, but also allows the team to create a midfield box of four (below). He has plenty of attacking talent to fill the wide slots in the front three, with Phil Foden or Bukayo Saka able to play on the right, and Raheem Sterling, Jack Grealish, Marcus Rashford, Mason Mount and James Maddison all capable of playing on the left. Harry Kane will lead the line.

The option of switching to a back four

Southgate used a back four in five of England’s seven games at Euro 2020, only opting for a back three in the final against Italy and in the quarter final against Germany. These were, on paper at least, England’s two toughest opponents in the tournament. He could do the same in Qatar, using a back four in games where England want to dominate the ball and lock the opposition in their half of the pitch.

A double pivot will again play a significant part in Southgate’s set-up, with a 4-2-3-1 shape the most likely option featuring a back four. Bellingham can again surge forward from deep, while Jordan Henderson also offers forward runs to the right, and experience in a mid-block, if selected in the midfield two. Either of these players could start alongside Rice in this shape. The use of two more defensive midfielders, such as Henderson with Rice, allows the full-backs to advance even higher, with the wide players then rolling inside to join the number 10 centrally.

The 4-2-3-1 shape gets the most out of creative players Mount or Maddison. Both are most comfortable as a single number 10 with licence to rotate out wide, as Mount showed at Euro 2020 (above). Two defensive-minded central midfielders are likely to feature if Trent Alexander-Arnold starts in a back four. A player such as Henderson can provide defensive cover on transition, meaning England are likely to get the most of Alexander-Arnold’s attacking talents. This shape also encourages the wide players to come inside or run beyond the opposition’s back line.

When England play with a back three, Walker takes up a similar position to that which he does for Manchester City. There, the back four converts into a three during the build-up phase, with the left-back pushing forward or inverting into central midfield. England won’t defend as high for as long as City, but Walker’s pace on transition is extremely useful. He helps cover balls in behind the rest of England’s back line.

Eric Dier has played some of his best football in a back three under Antonio Conte at Tottenham. His long-range passing and ability to step out with the ball will be a useful asset for England. He also has plenty of experience of fizzing balls into a dropping Kane, having stepped out in between the double pivot.

Luke Shaw is likely to start on the left side of defence, though Southgate has some history of using a right-footed player at left wing-back, so Kieran Trippier is also an option there. Shaw provides a more natural solution, though. He offers overlapping runs and crosses, which is ideal when paired with a wrong-footed wide player or number 10 such as Sterling, Mount, Grealish or Maddison, who will all come inside from the left.

Trippier’s form for Newcastle and his set-piece ability would help England continue to be a threat from dead balls. These played a huge part in England doing so well at Russia 2018, as detailed in set-piece coach Allan Russell’s exclusive interview with The Coaches’ Voice, which you can read here. Alexander-Arnold’s defensive abilities have been questioned, and there is talk that Southgate is unsure about playing him, but his delivery from set-pieces could prove invaluable.

Ben White’s versatility may also be a useful asset. He can play at centre-back in a back three or a back four, or as a more reserved right-back – as he has done in 2022/23 for Arsenal. Although England may lose some attacking threat with White at right-back, his presence would mean Southgate can convert into a three during build-up (above), which would allow Shaw to advance much further from left-back. This movement could make England’s left-sided rotations even more dangerous.

Lots of attacking threat in midfield

Bellingham is arguably England’s most exciting young player, and his versatility means he could be used in a number of different positions or systems. In the first half of the 2022/23 season for Borussia Dortmund, he has played as a single number 10, as one of two 10s behind a lone centre-forward, as a number eight in a midfield three, in a double pivot in a 4-2-3-1, and in central midfield in a 4-4-2 and a 3-4-3. He is a sensational box-to-box midfielder, and has incredible timing to his movements to join attacks. His late runs from deep give England something they’ve not had under Southgate before. In England’s World Cup warm-up games, Bellingham’s combinations with Foden and an overlapping right wing-back (below) have produced positive signs. These combinations could prove fruitful for England not only in Qatar, but also in future tournaments.

Maddison’s inclusion in the squad is well-deserved based on his form for Leicester. His ability to create from crosses, cut-backs and composed passes from inside the penalty area make him almost unique in the squad. He is most similar to Mount in how he drifts into the inside channels (below), but Maddison is likely to be used from the bench as an impact player. His energy, wide movements to link with overlapping full-backs, and goal threat all give Southgate another useful option from the bench.

A familiar and talented forward line

Raheem Sterling, still only 27, has long been a favourite of Southgate. The head coach values his versatility and pace to threaten in behind highly. Since moving to Chelsea in the summer of 2022, Sterling has been used as a second centre-forward, a winger and at wing-back, and he could be rotated similarly at the World Cup. In 2018, he started up front alongside Kane in a 3-5-2 He may be used similarly in 2022, with England possessing more depth in attacking midfield.

The dribbling skills England possess in the wide attacking positions, with Sterling, Grealish and Saka in particular, could prove useful in the group stage, where opponents are more likely to sit back for long spells.

Like Sterling, Rashford has also seen a slight role change at club level, with Erik ten Hag mainly using him as a lone centre-forward so far in 2022/23. For England though, Rashford has been used from the left to cut inside, or as a different kind of centre-forward to Kane in Southgate’s 3-5-2. Should England need a more attacking central option to play slightly ahead of Kane, or a transitional threat to counter-attack from deeper positions, then Rashford is the ideal candidate to work off direct play into England's number nine. This may become England’s preferred tactic in the knockout stages, should they convert into a mid or low block when defending a lead or playing against stronger opposition.

In Saka and Foden, Southgate has two more dribblers who can play on the right, but they are very different in how they operate. Foden is more of a pocket player, operating between the lines to progress play with his brilliant first touch and intelligent, incisive passing. Saka threatens more through his movements, both with and without the ball. The young Arsenal attacker therefore threatens in behind more than Foden; with him on the right, England could use a 4-3-3 with Kane dropping, and both wingers running beyond. The number eights will then cover the wide areas in transition – much like Liverpool do under Jürgen Klopp – with the likes of Henderson, Alexander-Arnold, Rice and Bellingham making up an ideal supporting cast underneath Saka’s penetrative runs.

Finally, Callum Wilson offers a back-up option to Kane, plus the option of another natural centre-forward if England are chasing a goal. It is rare, however, for Southgate to play a second traditional centre-forward alongside Kane in his 3-5-2, for example. Wilson’s biggest strengths are his dynamism inside the penalty area, ability to disrupt centre-backs, and his threat from crosses, so he could be a useful option if Kane needs a rest. Given Southgate only named two recognised centre-forwards in the squad, he will likely stick with one of the two for the most part.

Can England go one step further than they did at Euro 2020 and finally end their long wait for silverware? Qatar 2022 presents myriad challenges that no tournament before it has thrown up – not least player fatigue from a gruelling first half of the domestic season – so there may be a few surprises once the first ever winter World Cup is under way. Gareth Southgate will have prepared fastidiously, and will hope he has done enough to lead England all the way. We shall soon see if they can do it.