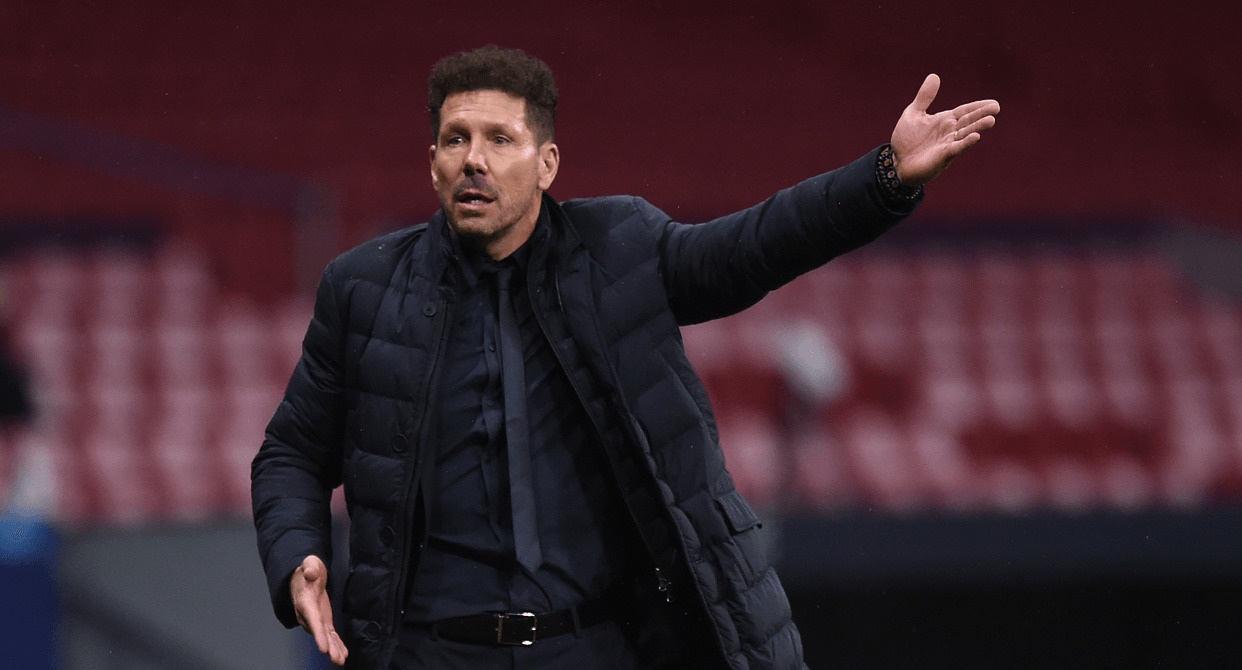 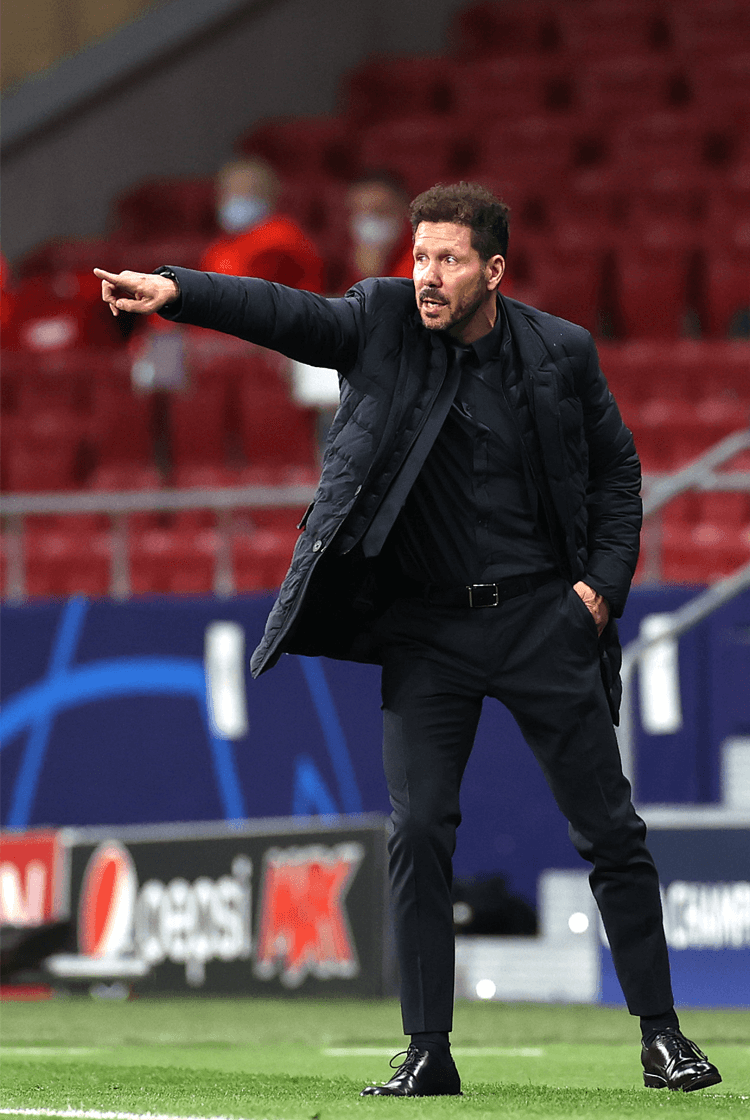 Profile
During the course of establishing himself as one of the world's finest managers, since his appointment by Atlético Madrid in 2011 Diego Simeone has brought an almost unrecognisable sense of stability to what had long been one of Spain's least stable clubs, transforming them into a permanent rival to Barcelona and Real Madrid. Since his return to the Spanish capital – he was once also an influential player at the club – he has inspired them to two Europa League titles, two European Super Cups, a Spanish Super Cup, a Copa del Rey, La Liga, and a similarly unlikely Champions League final.

He has also continued to improve a team that has experienced the departures of Sergio Agüero, Diego Costa, Antoine Griezmann, Thibaut Courtois, Arda Turan and Diego Godín, and overseen the admirable recruitment that led to the arrivals of João Félix and Jan Oblak, among others. Perhaps most impressive of all, however, is the consistency they continue to demonstrate in their tactical approach and their level of performance. Simeone's team is as organised as it is clinical and resilient, and continues to benefit from a lengthy – by the standards of the modern era – managerial reign.

Playing style
Simeone has long favoured organising his team into a 4-4-2 formation (below) and then attempting to dominate matches by occupying spaces and territory further forwards. Oblak has been their goalkeeper since 2014, since when – in a demonstration of Atlético's preference to build play in midfield after a direct ball, instead of short – he has most consistently played passes into the midfield third. Like the central defenders selected in front of him, he has also often targeted their front two – at least one of which will regularly be a suitable target for aerial play – and increasingly their full-backs. If they are instead confronted with a high press that means the passing lines to their central defenders and full-backs are blocked, their wide midfielders become his alternative target, and are supported by their front two moving to win the second ball in midfield.

Regardless of whether a shorter or direct build is unfolding, Atlético seek to spread possession from side to side, and at a high tempo. Their full-backs Renan Lodi and Kieran Tripper, preceded by Filipe Luís and Sime Vrsaljko, provide their width by moving into particularly advanced territory beyond even those in central midfield, and their wider midfielders Koke and Saúl Ñíguez – or Thomas Lemar, Ángel Correa, Vitolo or Yannick Carrasco if they are using wingers – move infield.

The most combative and versatile players in Simeone's team feature in central midfield, as he once so impressively did. When his team has possession those central midfielders move across and towards the inside channels to link with their full-backs, to towards the central defenders behind them, or forwards and into their wide midfielders or wingers. Koke, Saúl, Rodri, Thomas Partey and Gabi have all done so impressively while duelling for and regaining possession, linking defence to attack, and breaking lines with penetrative passes. They have also represented a strength for Atlético during moments of transition, and in ensuring that lengthier spells of attacking pressure can be maintained and by providing the platform for rotations increasingly seen within their 4-4-2.

The deployment of their front two is similarly influential. During transitions both often make forward runs – particularly after regains are made – and benefit from the energy with which the midfielders behind them press by pursuing the spaces that emerge in the final third. Félix's willingness to shoot early, perhaps more than any other quality demonstrated by those with whom he vies for selection, complements that.

During lengthier spells of possession, and therefore with those in central midfield in a deeper position to cover behind their advancing full-backs (below), their attackers are also encouraged to operate between the lines and to operate in a partnership as would a number nine and 10 braced for balls in behind or crosses from wide positions. Félix, and before him Griezmann, offered penetrative movements around a traditional striker in Fernando Torres, Costa, Álvaro Morata or most recently Luis Suárez.

With that 10 becoming their main target at cut-backs and moving to bounce and link play in midfield, and their nine posing a threat closer to goal, their wingers or wide midfielders support by moving infield to contribute at the second phase of the relevant delivery. The movements made by that nine and 10 trigger the nature of support and runs that follow in the central areas of the pitch and around them, in the final third. Against opponents defending with deep, compact defensive blocks that make it difficult to access the spaces in behind, that potential often proves particularly effective – ultimately contributing to their ability to adapt.

Pressing and defending
Atlético are comfortable using a variety of defensive approaches; they have been seen using high, medium and low blocks, the latter, particularly, when they are attempting to defend a lead. When they are applying a high press (below), they most commonly remain in the 4-4-2 from which their forwards press the opposing central defenders, activating further lines of pressure from their advanced midfielders, and their defenders. Those midfielders behind the first line of pressure often cover significant spaces, and their defenders attempt to reduce the spaces between defence and midfield, ultimately to disrupt any sense of continuity their opponents may otherwise develop.

With their front two often restricting access to the deepest-lying opposing midfielder, via their high press forcing the first phase towards the touchline Atlético make numerous wider regains. Their wider midfielders prioritise the full-backs opposite them after their front two's efforts have forced possession wide; the closest central midfielder then supports inside the high-pressing wide midfielder, and the remaining two midfielders adopt particularly narrow positions to keep the ball to one side of the pitch while offering protection in central midfield. Opponents are regularly left with little choice but to return the ball to their goalkeeper – who in turn is likelier to be pressed by a forward – or to switch play from one full-back to the other.

An alternative approach to Atlético’s high press (below) involves them reorganising into a more compact and deeper block. Compactness becomes essential vertically, to limit spaces between the lines, and horizontally, and involves a significant level of work and communication to prevent the switches of play that that block tempts opponents to make. On the occasions it is advanced around, their central midfielders and central defenders – typically authoritative in the air – adjust to defend against crosses and then to battle for second or loose balls.

When covering transitions into defence, those central midfielders similarly support behind their retreating full-backs by withdrawing to outside of those in central defence, who resist taking wider positions. From 2015/16 to 2019/20, Koke, Saúl, Rodri, Partey and Gabi were responsible for making the most regains at Atlético in the attacking half; their abilities to cover in defence often extend Atlético's spells of attacking pressure and ensure that Simeone's team needn't as regularly recover into their 4-4-2 block.

That their wider midfielders – Marcos Llorente is another who is becoming increasingly influential under Simeone's management – so often prioritise offering penetrative runs into the penalty area regardless means that the relevant two central midfielders are often short of support at moments of transition. A further potential weakness also exists against Atlético’s high press when opponents operate with a wide-moving attacking midfielder.

At the moment one of Atlético’s wide midfielders moves to press a full-back, if he is not complemented by one forward restricting access back inside into central defence and the other taking the relevant defensive midfielder, opponents can build with width and then attack infield through a less compact midfield. In that context it remains significant that defensive organisation is such a strength of Simeone's teams. His squad also continues to perform like one convinced and committed to its manager’s methods, making it increasingly likely he will soon reach a decade in his position in December 2021, when at 51 he may even be in his managerial prime.