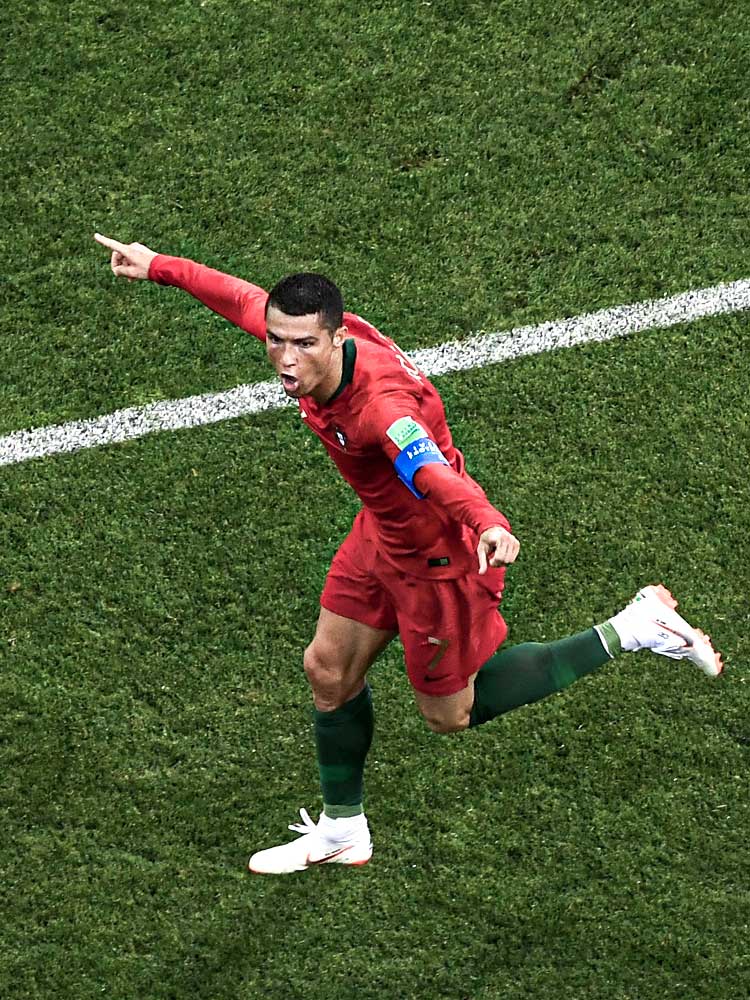 The first match at Russia 2018 to truly inspire came between the European champions Portugal and their neighbours and 2010 world champions Spain. Cristiano Ronaldo’s hat-trick secured a dramatic draw in a thrilling six-goal affair in Group B. Spain were close to securing a 3-2 victory before the then Real Madrid forward sent a sublime free-kick into the top corner in the 88th minute to deny Fernando Hierro his first win since dramatically replacing Julen Lopetegui on the eve of the competition. Diego Costa also scored twice on an evening when Manchester United goalkeeper David de Gea fell significantly below the high standards expected of him. Discussing Ronaldo, Portugal manager Fernando Santos said: “I’ve said it so many times, he’s the best in the world and I hope in Qatar he will score again. People talk about his physical condition but mentally he is so strong. I’m glad he’s Portuguese.” 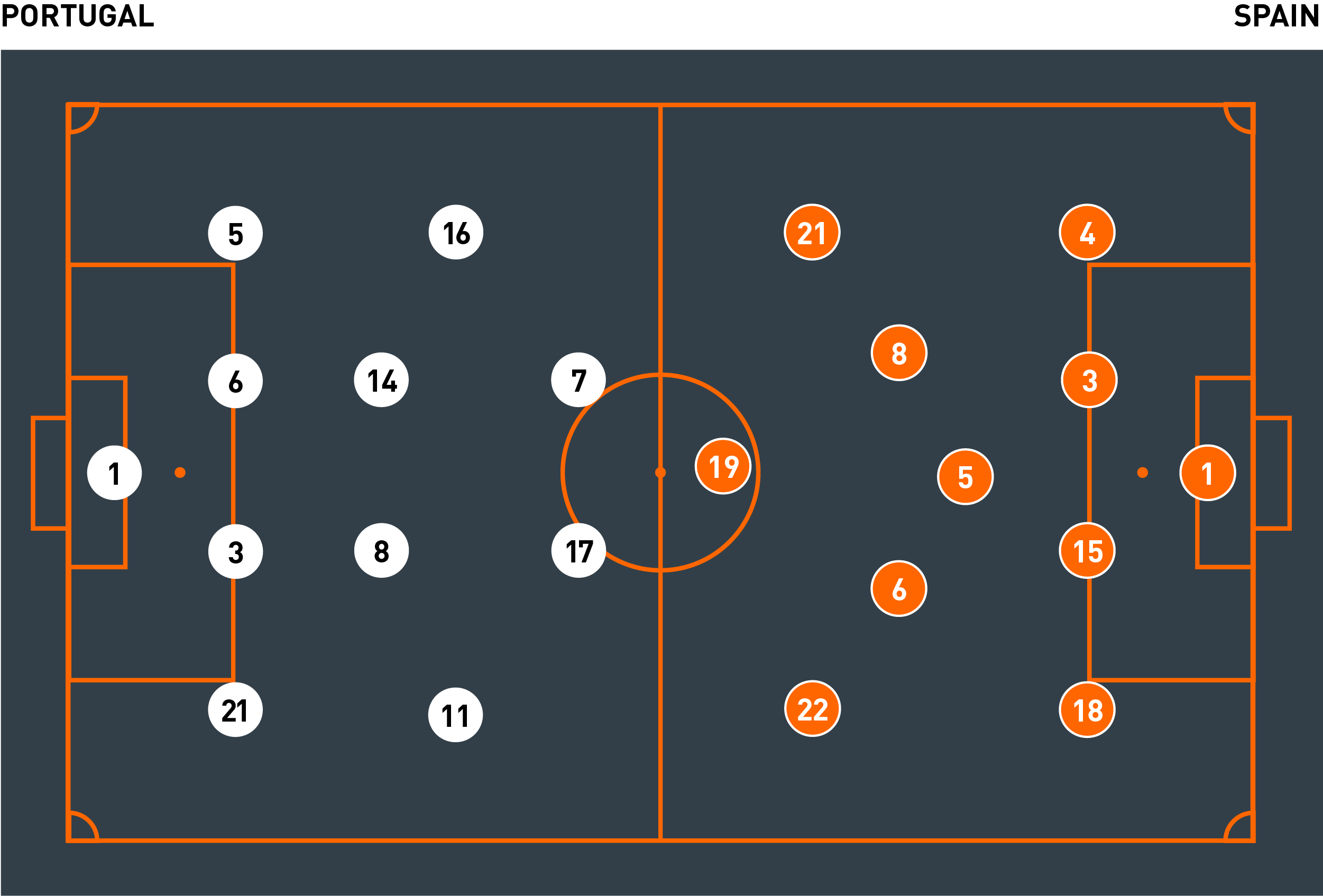 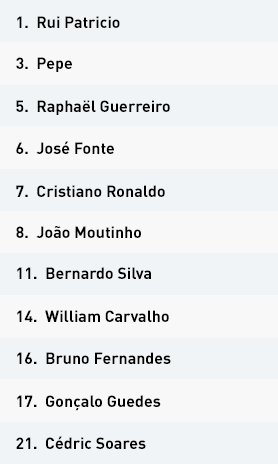 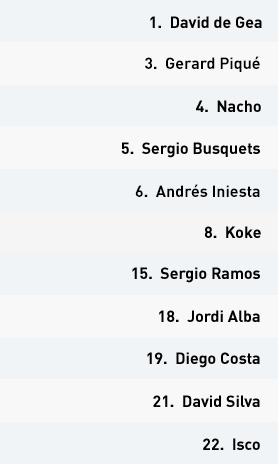 Portugal set up in a fairly orthodox 4-4-2 formation, with William Carvalho and João Moutinho in the centre of midfield, supported by Bernardo Silva and Bruno Fernandes. Cristiano Ronaldo joined Gonçalo Guedes up front, but he had the freedom to roam freely in the final third.

Portugal demonstrated a clear bias early on in attacking towards the left side and targeting Spain right-back Nacho. They attempted to overload him and to create opportunities in behind him or between him and Gerard Piqué. That overload would be provided by Fernandes,  Raphaël Guerreiro and Ronaldo, who would drift from his position as centre-forward.

It was from this movement that Ronaldo was able to get on the ball and to drive at Nacho to win the penalty for their opening goal. This method of attack could have yielded more goals, given the three promising chances that they created in the opening five minutes.

When Spain gained control of play, Portugal’s key threat came on the counter – led, again, by Ronaldo. His play with his back to goal was exceptional, as was the speed and intensity with which he joined counter-attacks after setting possession to a teammate.

In Portugal’s build-up play there were three main routes. One was a direct pass from either goalkeeper Rui Patricio or one of their defenders to towards Ronaldo, who would generally win the aerial battle; William and Moutinho would then attempt to win the second ball. Another method was the overloading of the wide areas, and the third was the counter-attack, from which they could well have scored another two goals.

Out of possession, Portugal were fairly pragmatic and operated in two banks of four – Ronaldo joined Guedes in the front line of two. Fernando Santos’ team were perhaps wary of being stretched by Spain’s fluid movement and rotations, so they sought to keep the organisation simple, with Moutinho and William ensuring that nothing came through the centre of the pitch.

The issue with this, however, was that Spain rarely used or occupied the central spaces while attempting to create. Portugal therefore had two players in the middle covering spaces that weren’t being used or threatened; it was only the pass into Diego Costa’s feet that they needed to be cautious of.

At 3-2 down, Portugal began to press aggressively. This suited Spain, as they were gifted more space between their opponents’ units to play. Chasing the game, Portugal had little choice but to take this risk – and it paid off with Ronaldo’s late equalising goal.

Spain set up in a 4-3-3 formation, with Sergio Busquets at the base of their midfield three, Andrés Iniesta towards the left, and Koke towards the right. Isco and David Silva supported Diego Costa in the final third. In possession, their width was created by their full-backs or wide forwards; typically, Isco and Silva would drift inside, inviting Nacho and Jordi Alba to advance and to support attacks out wide. Busquets protected Sergio Ramos and Gerard Piqué.

Busquets adopted defensive positions not only when those full-backs advanced, but when Ramos would look to dribble forwards. He was typically effective in providing that cover and the safety ‘return’ pass, should a teammate come under threat

The key to Spain’s exceptional build was the relationship between the two triangles formed by Isco, Iniesta and Alba towards the left, and Nacho, Koke and Silva towards the right. They rarely used the central areas of the pitch in their attempts to penetrate, leaving William and Moutinho to protect idle spaces, and instead built using the half-spaces, which drew Portugal’s central defenders out of position and into wide areas. Those on the far side could then attack the spaces vacated.

The common pattern was for Koke or Iniesta to withdraw into the spaces between the central defender and full-back. The relevant full-back would then advance much wider and further forwards while the wide forward in front of him would be free to drift inside into the half-spaces, threatening Portugal’s full-backs and wingers. Those movements, coupled with the late arrival on the far side into the vacated spaces, were an integral part of Nacho’s brilliant goal that put Spain ahead. Fernando Hierro’s team also had the direct pass and counter-attacking threat available through the deployment of Diego Costa up front, which was how they scored their first goal.

At 3-2 up, Iago Aspas came on and often operated in a false nine position, creating an additional option in front of midfield in an attempt to help control the and manage play through possession. Spain experimented with different phases while out of possession, depending on what was unfolding; in the initial stages they were less keen to press, but when Portugal led they had greater reason to retrieve the ball.

Their initial set-up was a 4-5-1 mid-block – easily transferable from a 4-2-3-1. After taking the lead, their press became a 4-2-3-1, with Koke joining Busquets in a deeper position and Iniesta advancing to support Costa, Silva and Isco in the first two lines of their press. Spain generally encouraged Portugal to play wide and to win possession near the touchline where three players – the relevant wide forward, central midfielder and full-back – would trap them.