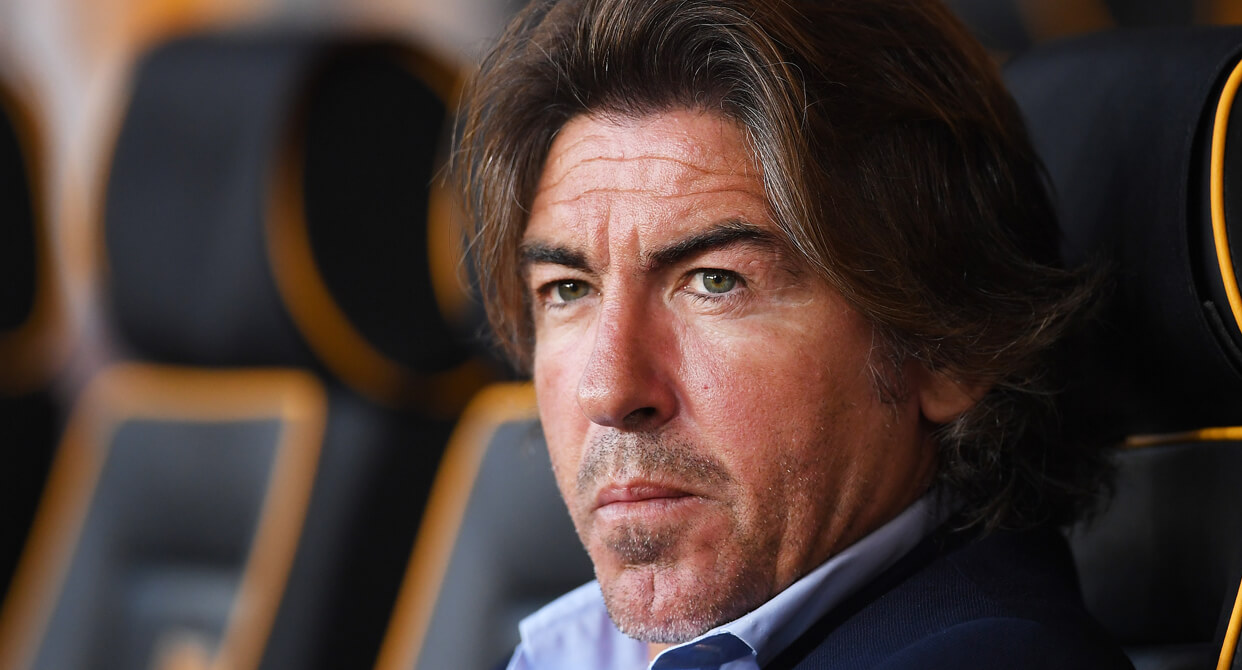 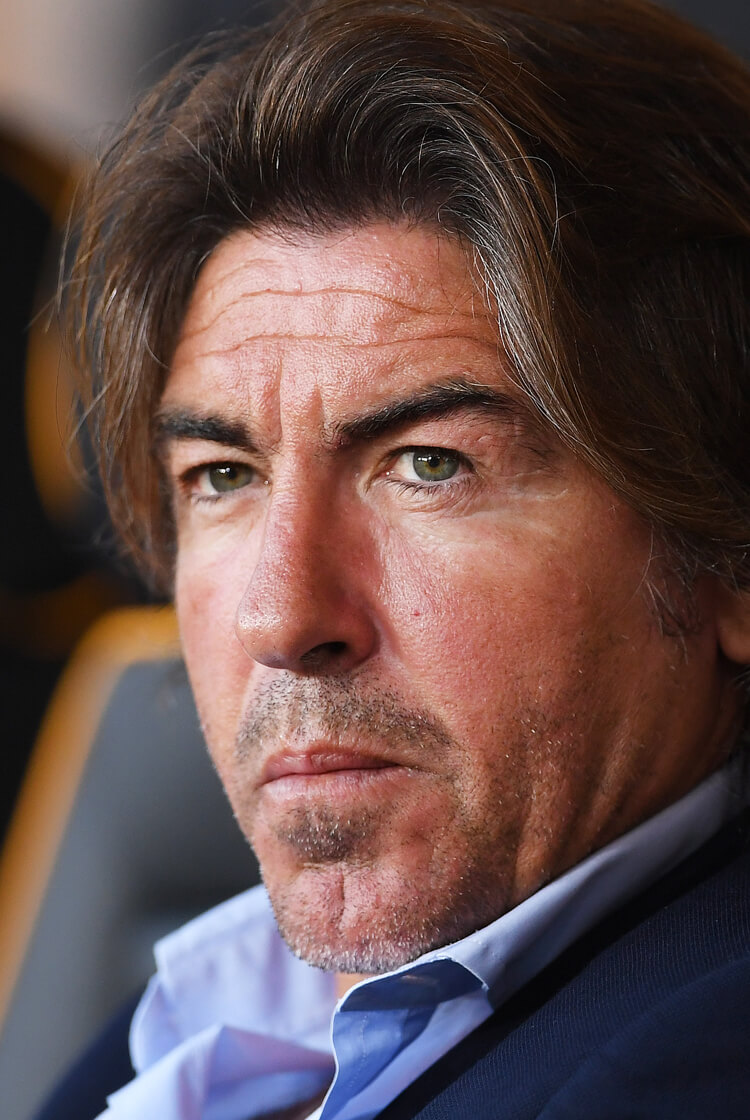 I knew I wanted to be a footballer when I was seven years old.

And I had the privilege to fulfil my dream and build a successful career. In Portugal, I won every trophy it is possible to win. I also achieved a lot of success with the national team – third place at Euro 2000 is the moment that stands out. It was a lovely journey.

The decision to become a manager required more reflection, so I tried to get as much knowledge as possible in different areas of the game. It could only be helpful for identifying the best path for my professional future.

The injuries I had suffered during my playing career boosted my reflections. I was 27 years old at the time of my first major injury, which came in the best moment of my playing days during my time at Real Sociedad. Unfortunately, I had a number of injuries after that too – in my anterior cruciate ligament and meniscus.

I had five knee surgeries in total, the last when I was 31. At that time, many doctors refused to operate on me. They said it was too risky.

But I didn't give up. I found a Swiss doctor who specialised in risky surgeries, and that gave me three extra seasons on the pitch.

“It’s not by chance the English use the word ‘manager’”

From my last operation onwards, though, I started to think more carefully about my future off the pitch. I was still a player when I began studying for the UEFA coach licence.

After my retirement from playing, I finished those courses while also graduating in business communication. I also completed a master’s degree in marketing and sports management at the University Institute of Lisbon.

Meanwhile, Sporting Clube de Portugal – where I had enjoyed two spells as a player (below) – opened their doors to me again. I worked for them in different areas, including their board of directors and as a club ambassador.

All were valuable experiences in helping me decide on my next steps. But I chose to be a coach. I realised that on the pitch is where I felt happiest.

But I also soon realised that being a manager is very demanding.

It’s completely different from being a player. Football is a collective game, of course, but the individual has only to care about his own performance. By that, I mean players can look after their own diets, their own rest, their own performances.

“There is one special coach I admire despite never having worked with him: José Mourinho”

The manager must take care of the whole squad, and even that’s not everything. It is our duty to create harmony between all of the departments in a club: medical, communication, scouting, staff and so on.

The responsibilities go beyond the pitch. The coach must be a leader to manage people in different areas of the club.

It’s not by chance that the English used the word 'manager' to refer to the head coach.

There aren’t many secrets in football now.

We all have access to so much information that is basically a click away on the internet. And, at professional clubs, there is usually software capable of giving you any kind of statistic you might need about your opponent – either individually or collectively.

So what makes the difference? The manager’s game strategy, and their leadership skills.

I had the privilege of playing under some great coaches, and I’ve learned a lot from all of them.

However, there is a special one who I admire very much despite never having worked with him. That is José Mourinho (above).

During his time in charge of Inter Milan, I had the chance to follow his routine closely for a week. Then, the same opportunity arose years later when he was at Real Madrid. We have a good relationship, and I have a huge admiration for him. His ability to read the rival and prepare his teams for each game is impressive.

I also have other references, such as Pep Guardiola and Maurizio Sarri (both below). The offensive dynamic of their teams is fascinating. Their hunger to control the opponent in every aspect of the game. Ball possession is a must for these coaches. They want mobility and creativity, players constantly creating passing lines and getting into good positions – but respecting the spaces determined during training.

That is something I also propose to my teams. My football idea also involves controlling your own game.

I like to build an aggressive team, either with or without the ball – but my side should never lose defensive balance.

Football requires some unpredictability, of course – you must always look to surprise your opponents, but without losing your balance. It’s important to understand how to attack and defend at the same time. That said, if you want to win you need to take risks.

Experience is important in any profession. Repetition is valuable – that’s how perfection comes. I’m a better manager today than in comparison to my early days in the job. It is natural.

In my development, I have learned from many different football philosophies. But in order to achieve a game strategy, you can’t just look at the players’ characteristics.

You must be aware of local culture and understand different contexts. In some places, there will be rejection if you play with only a single forward or use three defenders. I’m not saying coaches should succumb to external pressures, but it can only be helpful to understand the features of each country’s school of football.

I have had coaching spells in Greece, with OFI Crete and Atromitos; in Serbia, with Red Star; and with Standard Liège in Belgium. At each, we managed to achieve positive results. I took charge in difficult situations and transformed the teams into challengers.

In Poland, at Legia Warsaw, we also did a job that was rewarding – but I found there was a lot of resistance to ideas from overseas, and I couldn’t put my philosophy into action at all times. I mean, with timings and routine rules at the club. We eventually climbed the table into second place, but I believe that incompatibility cost us the league title.

In Saudi Arabia, at Al-Fateh, the situation was even worse. The environment wasn’t really professional, and the issues were enormous.

But every experience has its value, and I was still able to grow in that less professional environment.

Back home in Portugal, I have had some interesting experiences. At Belenenses, a traditional club in my home country, we managed to qualify for the Europa League group stages for the first time. Both in terms of football and financially, it was a very good period for the club.

In my most recent job at SC Braga, I believe we did an outstanding job in a demanding context, with games basically coming every three days during a five-month period. We had an unbeaten run in the Europa League, enjoying better results in the competition than both Porto and Sporting. I thought we were the best team in the group stages.

When I left the club, we were climbing the Primeira Liga table and in the semi finals of the League Cup. Unfortunately, I didn’t have the chance to finish that job.

All of these experiences have made me a more mature professional, though. I feel ready to manage any team in the world.

That includes Real Sociedad (above), where I thought my chance had come a couple of years ago.

This is a club for which I have a lot of affection. As a player I spent three years there, where clashes against Real Madrid and Barcelona stand out in my mind. I had the privilege of facing phenomenal players: Zinedine Zidane, Rivaldo, Ronaldo, Roberto Carlos and many others.

La Liga was the best league in the world at that time, and people treated me really well in the Basque Country. I was very happy there. Above all, it was fun. We had a quality team, capable of playing fearless football.

“I’ve always been obsessed by effort – winning is vital, and dedication the only way to reach it”

Approximately two years ago, Real Sociedad were about to change manager – and I was living a fantastic moment of my career.

I had just won the Belgium Cup with Standard Liège. That season, I was considered one of the best managers in Belgian football.

I thought the offer would come, but unfortunately it never did. Who knows, maybe one day it will? I represented Real Sociedad as a player and I would like to represent them once again, as their manager.

As a player, both at Real and all my other clubs, I was known for my fighting spirit. People used to call me ‘Lion Heart’. I never dealt well with the idea of losing. I used to lose my appetite with a draw, so imagine what I was like with a defeat.

I’ve always been obsessed with effort. Winning is vital, and dedication is the only way to reach it.

Giving up was never an option for me. Since my early days, I’ve been setting goals, accomplishing them and creating new ones. It’s inherent. It’s a part of me.

“I am privileged to have experienced the intense passion of football not once, but twice”

As a player, I didn’t fulfil all of my desires. I’d have loved to play in English football, for example. I would have fit in easily there. Packed stadiums, passionate fans, high-intensity football and lots of goals. I didn’t experience it as a player, but hopefully I’ll have the chance to do so as a manager.

I did play in England with the national team, though, at Euro '96 (above). Portugal had a fantastic campaign. We were knocked out by the Czech Republic in the quarter finals, but it was an unfair result. Portugal were playing the best football in the competition. We lost to the Czechs despite creating many more chances than our opponents.

We played an eye-catching brand of football at that tournament. Few would disagree. Perhaps we were too romantic, though. We were having fun while playing football. Maybe we missed a bit of pragmatism. But it was a shame – I really think we could have gone all the way to the final.

That golden Portuguese generation had another opportunity at Euro 2000. It was basically the same group of players, although more mature.

The problem was that France also had a great team, and we faced them in the semi finals.

It was a tight game that could have gone either way – and I still think the decision to give the penalty from which Zidane scored the winner (above), at the end of the extra-time, was controversial. I’m not sure the referee saw Abel Xavier’s alleged handball.

Unfortunately, he gave the penalty and we were sent home. Once again, I think we could have reached the final and become European champions.

I feel privileged to have experienced the same intense passion of football not once, but twice. First as a player, and now as a manager.

The majority of my experiences have been positive, but I want more. I want to reach the next level, and I believe I’m on my way.

I want to manage clubs that are contenders for titles. That’s what moves me still – my passion for the game, and my ambition to win.