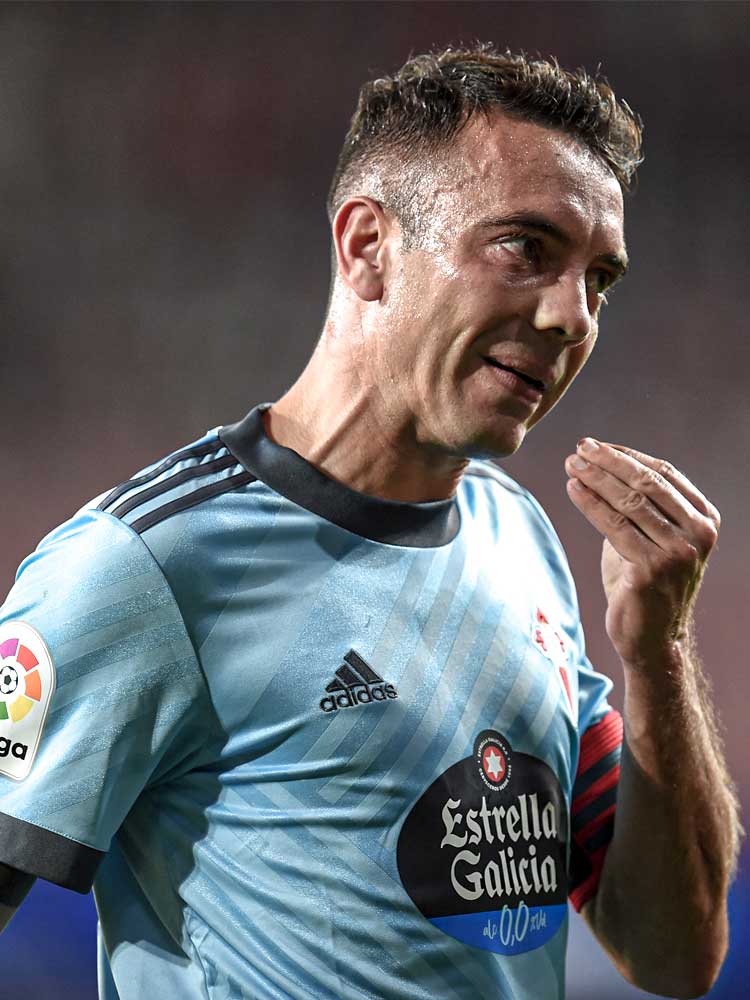 Profile
Since his departure from Liverpool in 2014, where at the age of 26 he struggled to secure regular first-team football in an attack that was led by Daniel Sturridge, Luis Suárez Raheem Sterling, and Philippe Coutinho at their collective peak, Iago Aspas has scored more than 100 goals and recorded more than 30 assists. So crucial has he become to Celta Vigo that he has been labelled the "Messi of Moana" in recognition of both his influence and the fact he is from and again lives in the small town of the same name close to Vigo.

Being under-appreciated has proved a recurring theme in his career – he perhaps could have proved what Liverpool needed when Suarez left that same summer and Sturridge's injury problems truly began. Even Spain's manager Luis Enrique, who oversaw another exciting attack in Suárez, Neymar and Lionel Messi at Barcelona, recognised he had once misjudged him. "It is important to recognise when you have made a misjudgement or a mistake on someone and that was the case on Iago Aspas," he said. “Since seeing him in training, I must admit I previously underappreciated him."

Tactical analysis
Though Aspas’ time at Liverpool and Sevilla was not as successful as he might have hoped, his experience at those clubs proved crucial in his development as a player. At Celta, he is a distinguished, cultured and versatile player who leads by example.

At Liverpool – where in 15 appearances during 2013/14 he scored only once – he had the benefit of sharing a pitch with Suárez, Coutinho, Sterling and Steven Gerrard. In the 4-2-3-1 Brendan Rodgers favoured at the start of that season, Aspas played behind their striker, usually Sturridge, and alongside Coutinho and Jordan Henderson (below). In his one season at Sevilla, under Unai Emery, he was the most advanced attacker in another 4-2-3-1.

It is only at Celta, however, that he has truly performed to his full potential. He has been able to show his technical qualities on a more consistent basis, regularly scoring – in 2017/18 only Messi, Cristiano Ronaldo and Suárez scored more goals in La Liga than Aspas’ 22 – and creating, too. His greatest strength, regardless is his understanding of the game.

Owing to that understanding he can play in a variety of attacking positions and is effective at drifting away from his starting position to find space. He can play at centre-forward – either on his own or in a two – or further from goal, as a right-sided forward or a second striker who seeks to receive the ball between the lines. He also recognises that his responsibilities change depending on his starting position and, though he is at his best when able to exert his influence with the ball at his feet, he makes valuable off-the-ball contributions.

When selected as a lone striker, Aspas pushes up to give his team’s attacks depth and to provide a threat in behind (above), both to earn himself a potential chance to shoot on goal, and to stretch opponents and therefore create space for his teammates in midfield. He is efficient close to goal because of his knowledge of how take advantage of any space he finds, and because he anticipates what his marker expects him to do, applying that via small, quick movements to generate the room he requires.

He remains most effective, however, as a second striker, because of the increased freedom he can use to influence what is unfolding. He moves on the blindside of his opposing midfielders and seeks to draw defenders out of position. He is also confident when receiving in tight spaces in deeper territory, from where he quickly turns towards goal (below) or combines with those close to him via short-range passes –  something that was barely visible at Liverpool, but that has impressively developed at Celta. Should he start towards the right or elsewhere, Aspas is also content adopting a wide position and moving diagonally towards goal and combining, through one-twos, with more advanced teammates to progress possession and potentially create a chance to shoot from distance with his stronger left foot. He is a threat on goal from range with his left foot, in the same way he is from direct free-kicks.

Role at Celta Vigo
Since his arrival at Celta in 2015, and regardless of the identity of their coach, Aspas has remained one of their most important players. Their most recent consistent shape has been a 4-1-3-2 in which he partners another striker – most regularly Santi Mina – in front of their favoured midfield three of Denis Suárez, Brais Méndez and Nolito, whose consistent positioning encourages Aspas and Mina to play with the freedom to either advance or withdraw to link play.

His chief responsibilities involve playing others in on goal or running on to through-balls played into his path (below). When seeking to feed others, his vision and technical qualities mean he attempts to keep the ball on the ground and therefore present a superior delivery and quality of goalscoring chance to the target of that delivery than would apply if playing lofted passes or crosses. His deliveries from set-pieces are also both accurate and valuable.

His brilliance and consistency for Celta contributed to Aspas also featuring regularly for Spain, which in turn enhanced his variety through them also selecting him as their leading striker, second striker, or as a wide forward with different teammates and in a team that dominates possession significantly more than do Celta – which he also adapted to. As for so long at club level, he consistently performs to a high level.

When he is required to defend, Aspas shows an admirable work ethic to close passing lanes, most commonly by screening his opposing central defenders or moving wide to close down the relevant full-back. The leadership he demonstrates also inspires similar efforts from his teammates, who witness his aggression and tenacity in attempting to recover possession and break up play, even at the risk of what might otherwise be a reasonable disciplinary record.