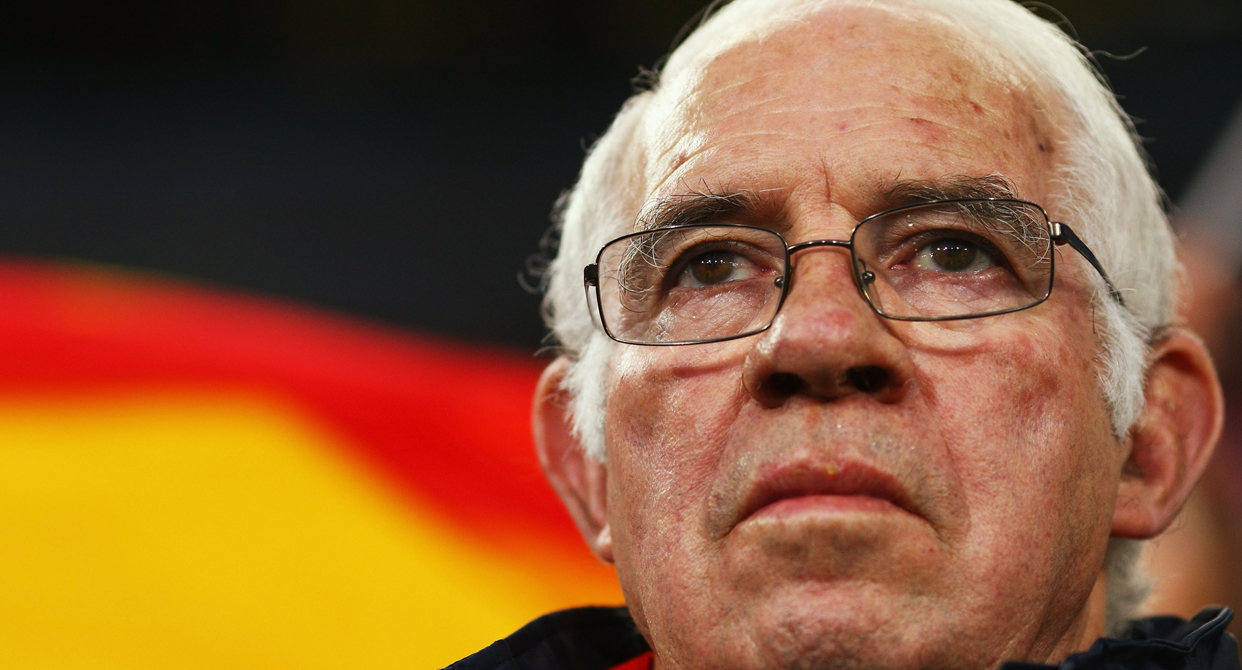 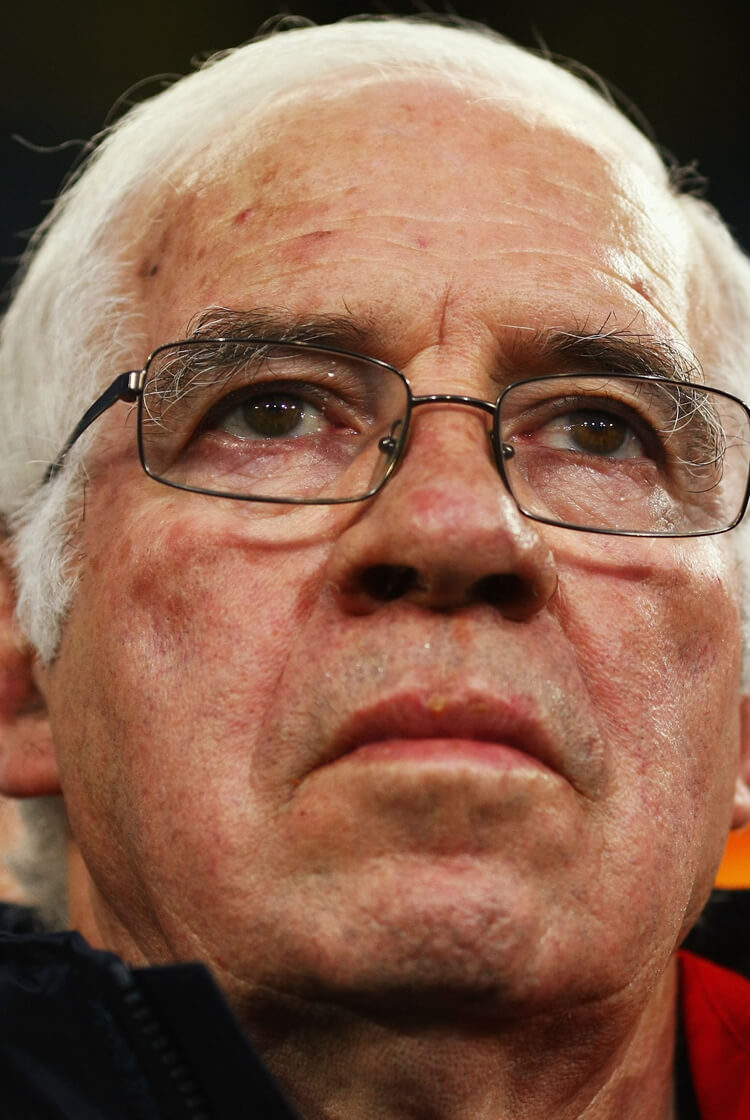 Nobody believed in the Spanish national team.

But Luis Aragonés did. He was sure we would win the European Championships in 2008.

It was also he who convinced us all – the players and the coaching staff – that it was possible. In his own way, he did so just by being Luis.

The same Luis that I met for the first time when I was just 17, and only a kid. It was September 9 1984 – the day of the football strike.

The players were fighting for their rights. Atlético Madrid's first team (including Mendiondo, below), like all of the others, decided not to play.

La Liga didn’t stop. The club demanded that the juniors played, against Osasuna at the Vicente Calderón.

There’s an image from that day that I will never forget. We got to the dressing room and there was Luis, right in the middle of it, waiting for us.

He was a leading figure, who for young kids like us commanded a lot of respect. Luis was already one of the big personalities at Atlético, and within Spanish football.

He was the benchmark for us. Somehow, from then on, our paths always crossed.

"Luis wouldn’t miss a thing – what was happening on the pitch, and even what could happen if he didn’t fix something"

A year later I went to play first for Rayo Vallecano, and then to Espanyol. Luis stayed at Atlético, but some years later we met again when he signed for Espanyol.

When I stopped playing he then surprised me by calling me to work with him at Atlético, as a pitch-side assistant and an analyst. He recruited me again when he became the manager of the Spanish national team (below).

I was still at Atlético when, one day, he called me. “César, will you come with me?”

I obviously accepted the offer. I also later went with him to Fenerbahce (below) and Turkey, to be his assistant manager.

"Luis was a visionary in knowing how to manage a match"

As the assistant to the first-team manager, you know that your job is to get involved in working out training sessions alongside other tasks. It is also to help the manager to spot something that he might have missed.

In Luis’ case, the latter didn’t ever happen. He wouldn’t miss a thing.

He would see what was happening on the pitch, and even what could happen if he didn’t fix something. Knowing how to manage a match is fundamental to being a great coach, and that’s where Luis was a visionary.

He knew exactly what was needed from a player at any one time. He had been one – and one of the best – before becoming a manager.

"You could find Luis walking around the hotel at any hour"

Thanks to his experience, he always knew what was going through a player’s mind. He would ultimately think like a player, while they were playing, and off the pitch he maintained a really close relationship with them.

That's how he built up that national team. He was constantly communicating with his players.

I am not exaggerating when I say "constantly". Luis slept very little.

You could find him walking around the hotel at any hour. If he saw a player, he would go and talk to him.

"His faith in the players had made them reach new heights"

It was the same with all of the players – he didn’t make any distinctions. The group was the most important thing.

I also already knew what those conversations were like. I had experienced them before.

From a distance he looked like a man who didn’t like to talk much, but he used his tools very well. He would tell you things gradually.

His instructions weren’t long. Just brief, but they put you in the right place on the pitch and told you what you had to do.

"Changing 'the Spanish Fury' to 'tiki-taka' was not easy"

Eventually, he would end all of those conversations with: “It's our time. We are going to win the Euros.”

That faith in the players made them reach new heights that most of them could never have believed. He was the one who knew that they were of that level.

The level they reached to win the European Championships in brilliant fashion, and with a new style of play. Changing “the Spanish Fury” to “tiki-taka” had not been easy.

At times it was actually very hard, and very hard for Luis. In a sporting sense, as well as personally.

"He knew we could not compete physically with some teams"

We had started the qualifiers very badly, losing the first two matches away to Northern Ireland, and then Sweden. We were already on the back foot.

That was when Luis decided that the style had to change. It was an idea he had been mulling over since being knocked out by France in the round of 16 at the 2006 World Cup (above).

He had realised that we could not compete physically against teams like France and Germany. He therefore decided to overhaul the national team, and to leave some players out.

That’s when the press gave Luis a hard time over Raúl (above, centre). Other players who had contributed a lot to the national team also left, like Michel Salgado, David Albelda and Santiago Cañizares (above, right).

"The most important match at the European Championships was not the final, but the quarter final against Italy"

But it all became about that one player who had been great. Who, understandably, had many followers.

In the midst of it all, the revamp was underway. But it was against the clock, because no matter what we had to win.

I don’t know if Spain would still have won with the players left out. Maybe they would have, but the reality is that Luis demonstrated with what happened that his decisions had been the right ones.

He also made those decisions without considering anything personal, like it was said at some point in the press. Luis simply believed that there were players in better shape at that time.

"Winning the final was just like bathing in sheer delight"

It was a European Championships where the most important match was not the final, but the match against Italy in the quarter finals (above). The game went to a penalty shootout, where previously we had always been eliminated in big competitions.

There, after so long, we at last got a bit of luck to get through to the semi finals. After that everything went smoothly, because the players were growing in confidence.

That ability to believe that something can happen – and that you are capable of achieving it. You could feel it in the camp.

Winning the final against Germany (above) was like bathing in sheer delight, but it was also tinged with sadness. We knew that Luis' time with the national team was coming to an end then.

At some point in the qualifying campaign, he had told us that he would not carry on. But he hadn’t signed anything with another team.

The situation was that we got to the Euros and we started to win. Luis, meanwhile, found out that the Spanish Football Federation had been talking to Vicente del Bosque. I believe that that is what made him think that he should go.

After winning the tournament, everyone wanted him to stay. There were even phone calls from very important people outside football, asking him to change his mind.

Luis, during the relevant transition period, had signed a contract with Fenerbahce, and he was a man of his word. He stuck to his decision, although he would have liked to have carried on. He loved the national team.

He was sure of something else, too. That that team was going to win the World Cup, in South Africa, two years later.