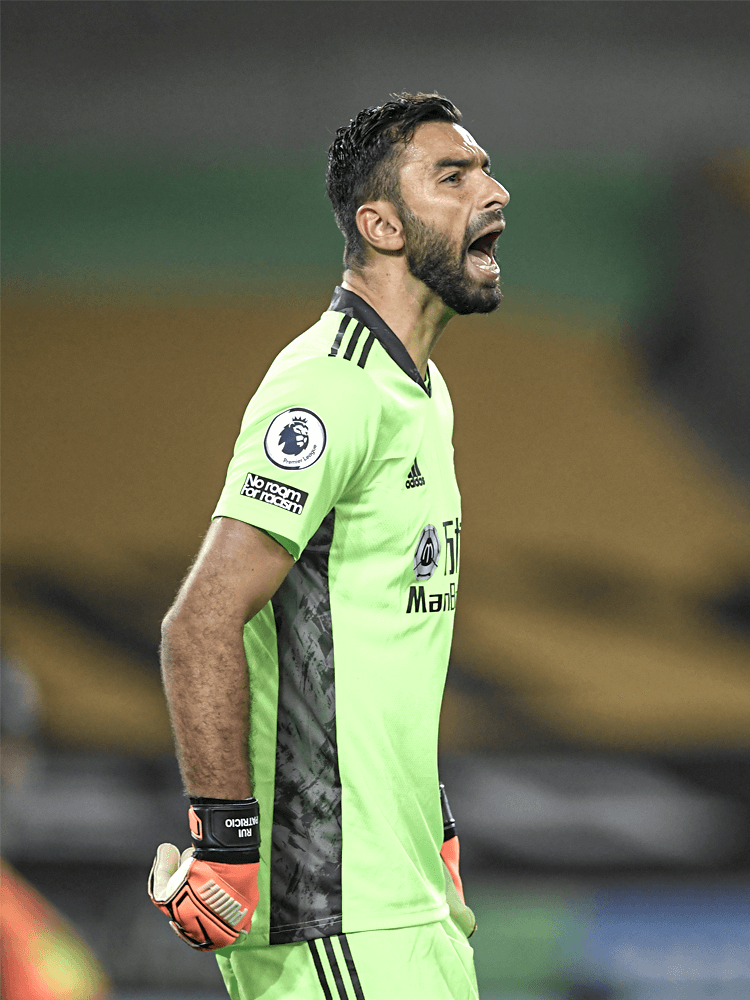 Profile
Wolverhampton Wanderers have used their Portuguese connections wisely. The signing of goalkeeper Rui Patrício from Sporting Lisbon in June 2018 following the club’s return to the Premier League demonstrates that as well as any.

Patrício made more than 450 first-team appearances at his only club before moving to England, winning seven pieces of silverware in his 12 years there. Having represented Portugal at every age group from the under-16s, he made his international debut in late 2010 and was the undisputed first-choice goalkeeper for almost the entire decade, which of course included a first triumph at a major tournament for Portugal when they won Euro 2016.

Patrício has plenty of experience and he has played a significant role in Wolves establishing themselves as a Premier League team, but their manager Nuno Espírito Santo – a former goalkeeper himself – says there is still room for improvement. “When he joined us, he was a top goalkeeper and a European champion who had played almost 100 games for Portugal,” Nuno said. “He has been amazing for us, but we know there are aspects he can still improve, and this is what we are working on.”

Tactical analysis
Patrício has good reactions when keeping out close-range shots. He prefers to stay on his line rather than coming to claim crosses – both in open play and at set-pieces – and relies either on his centre-backs to clear the ball or his agility to stop shots that come his way (below). What he lacks in a willingness to claim deliveries he makes up for in the combination of his reactions, strong wrists and saving technique.

Despite that reluctance to claim crosses, Patrício is very quick to close down opponents moving towards goal. When forwards are put through on goal, he is particularly quick to come off his line, put pressure on the attacker, and close down the angles for them to shoot. He uses his large frame to make himself as big as possible, and he also stands up for as long as possible. He is far more effective doing that than diving at the feet of an attacker. Because he is so tall, he can also be a little too slow to get down; there have been a few too many occasions when forwards have managed to dribble around him as a consequence.

There is, however, a weakness in his game when facing long shots. When he is left purely to his instincts – facing close-range shots, for example – he is incredibly strong, but he can be slow to move across his goal when trying to deal with shots from distance. His footwork isn’t the best in those situations, and opponents who hit powerful shots can find a route past him from range. He is not fast enough to sort his feet out in preparation to dive. As a result, he has perhaps conceded too many long-range goals in his time at Wolves (below).

Role for Wolves
Patrício’s arrival at Wolves improved the quality of the shot-stopping in their squad, but in his role for the team he does not do a great deal more than try and keep the ball out of the net.

His kicking is not a strong part of his game, particularly when put under pressure from opponents. Following a back-pass from a defender, Patrício’s lack of assurance invites pressure from attackers who sense an opportunity as the ball rolls back towards goal. As the ball travels, Wolves’ centre-backs do not drop back to offer a passing option to their goalkeeper, and he will almost always look to play long. On the rare occasions he has tried to take a touch, he has sometimes even lost possession and gifted an opponent a huge chance (below).

Patrício plays almost 90 per cent of his goal-kicks long, to the extent that only a handful of Premier League goalkeepers launch more long passes than Wolves' number one. None of the other teams who play long from their goalkeeper as much as Wolves have finished anything like as high up the table as Nuno’s did in their first two seasons in the Premier League. That is, the most successful teams play short from their goalkeeper far more than Wolves.

Those teams also like to use their goalkeeper to sweep up behind their defence far more than Patrício does for Wolves. Almost all of the Portuguese goalkeeper’s work is done inside the penalty area, whereas lots of modern goalkeepers are encouraged to defend on the front foot and race out to clear any loose balls. Nuno does not rely on Patrício to rush out and sweep up. Over the course of the 2019/20 Premier League season, Wolves’ goalkeeper made fewer defensive actions outside of his penalty area than the goalkeepers for any other team – just eight over the course of the entire season.

Patrício’s reflexes are strong enough that his weaknesses with the ball at his feet do not affect his selection. Wolves also play in a way that protects his deficiencies, and he saves shots with enough consistency that he retains importance to their ambitions.