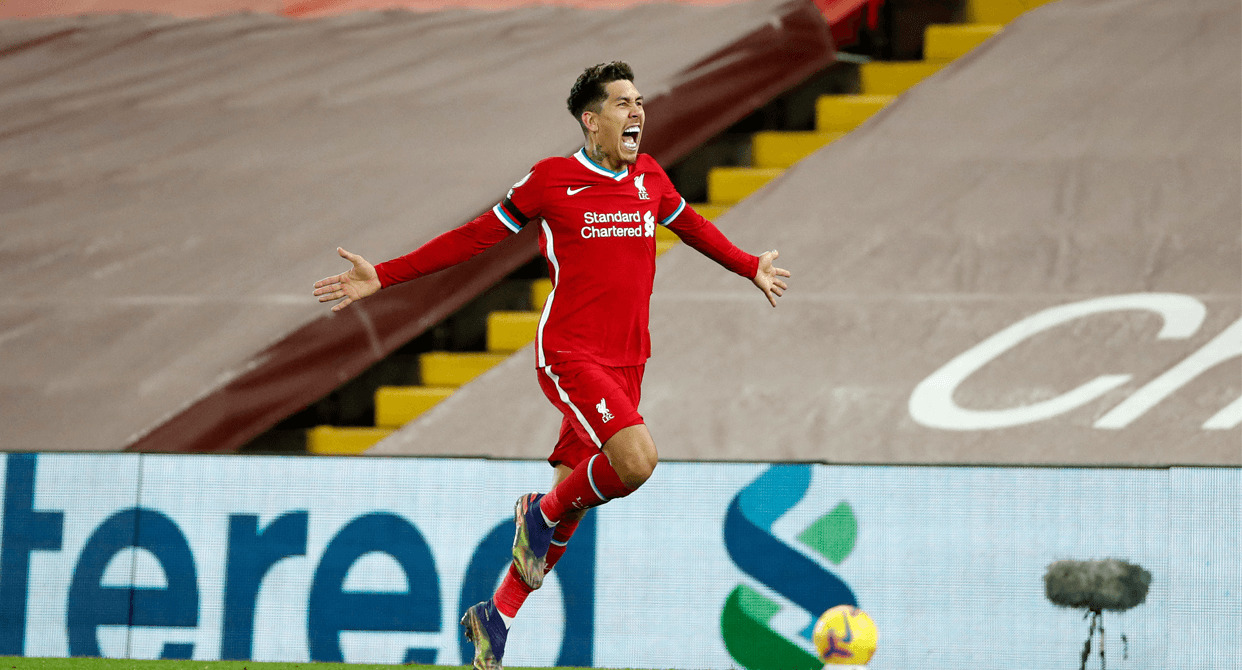 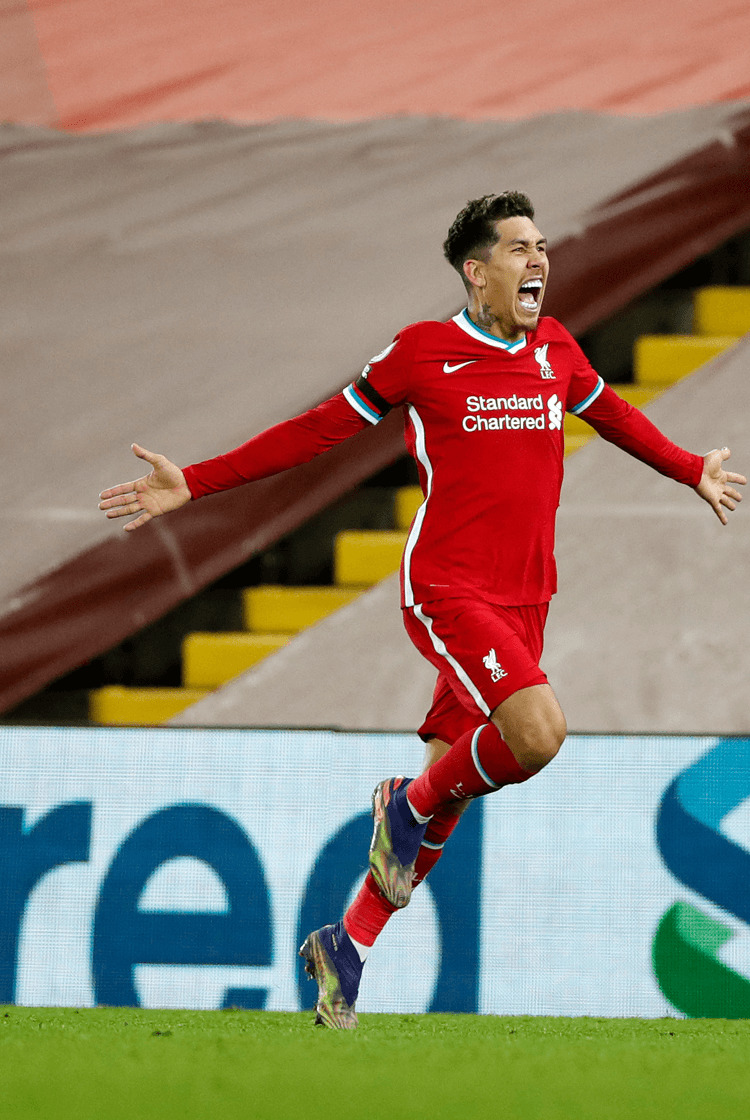 Liverpool secured what could prove a significant victory in their pursuit of the 2020/21 Premier League title when Roberto Firmino's 90th-minute header gave them all three points against Tottenham, their closest challengers. After 13 fixtures, the champions are in first place with 28 points, three ahead of their rivals, who by three goals have a superior goal difference. Mo Salah's deflected shot somewhat fortuitiously gave them the lead, but Son Heung-min's finish ensured Spurs were level by half-time, and during the second half Steven Bergwijn struck the post. Firmino's goal inflicted Spurs' first league defeat since the opening weekend of the season, when they lost to Everton. Son's 11 goals in 13 games matches the total he scored in 30 during 2019/20; José Mourinho's record of two draws and four defeats away to Jürgen Klopp makes the German the manager he's faced most in away fixtures without winning. "It was just a really good game against a counter-attacking monster, the possession we had we did incredibly well," Klopp said. "Yes, they have scored a goal and had two chances. Apart from that, we controlled the game and it is a massively deserved three points. It (the Spurs goal) is offside." Mourinho said: "It was a very undeserved result, but that's football. At half-time we move the pieces a little bit, but overall the game was always under control and I am very pleased with the performance." 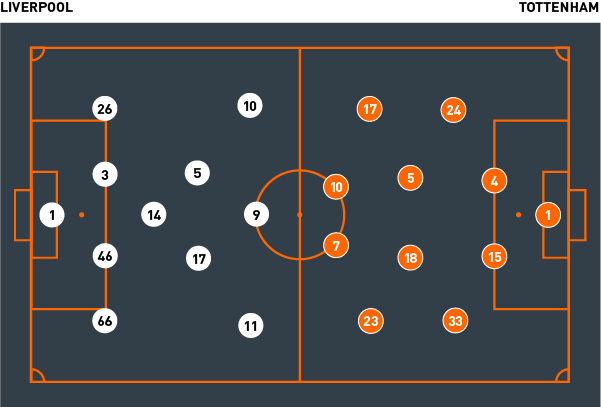 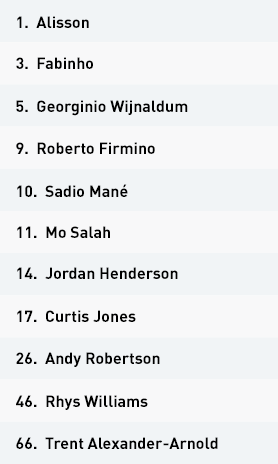 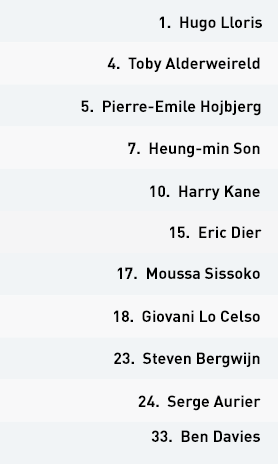 Liverpool retained their manager Jürgen Klopp's long-favoured 4-3-3 formation, which on this occasion featured Fabinho and Rhys Williams in central defence. Their visitors, Tottenham, defended with a 4-4-2 via Serge Aurier and Ben Davies withdrawing into defence, and Steven Bergwijn and Moussa Sissoko into midfield.

They largely dominated possession, but were confronted by a proven defensive block. Harry Kane and Son Heung-min sought to restrict access into Liverpool's midfield and to apply mild pressure to their central defenders to discourage them from advancing to create an overload. Spurs' wide midfielders Sissoko and Bergwijn engaged Liverpool's influential full-backs, and Pierre-Emile Hojbjerg and Giovani Lo Celso sought to manage both the half-spaces and the opponents who moved into those areas.

Liverpool had several approaches to attempting to penetrate through that block. In the defensive third Jordan Henderson withdrew into a deeper position to create a three-on-two with Fabinho and Williams against Son and Kane, and to provide cover against counters into the spaces behind Trent Alexander-Arnold and Andy Robertson. There were also occasions when Curtis Jones or Georginio Wijnaldum moved to instead create a four-on-two when possession was being circulated, to generate the space required before it could be taken forwards. Allison rarely contributed, regardless of his comfort with the ball at his feet, because of the high starting position he would have required and because of the nature of the threat posed by Spurs' front two.

Further forwards their approach became more complex. Individuals moved outside of an opposing midfielder to isolate him and create an overload that allowed them to combine around him, as happened in the build-up to their opening goal; Jones, particularly, moved to receive between lines while facing goal; Roberto Firmino also did so by moving to towards the ball. With Toby Alderweireld and Eric Dier reluctant to move with him because of the space doing so would have given Mo Salah and Sadio Mané, Firmino also contributed to creating a three-on-two in the centre of the pitch. Given Hojbjerg and Lo Celso, and in the second half Sissoko, were responsible for monitoring the half-spaces and those who entered it, Jones was able to draw Hojbjerg out of position, encouraging Mané or Firmino to instead move into those half-spaces and to contribute to progressing possession.


During the second half Spurs played further forwards and also more willingly acted on triggers to press in an attempt to force mistakes and turnovers near Liverpool's goal, and therefore to create more counter-attacking opportunities that Liverpool would struggle to counter-press. For all of the hosts success in advancing beyond Spurs' front two and midfield, their defence proved significantly more resilient.

Dier and Alderweireld rarely strayed from their positions, and Davies and Aurier sought to engage Salah and Mané one-on-one. Liverpool therefore often played a diagonal pass from a wide position, and complemented those passes with a third-man run from midfield designed to end in that midfielder receiving beyond Spurs' back four, or played a pass into the space between the relevant full-back and central defender. Spurs impressively tracked those runs, however, and Dier's and Alderweireld's positioning meant that they defended against the majority of the crosses they encountered.

Contrasting movements made by their forwards and full-backs were also used in an attempt to unsettle Spurs' defence; Sissoko and Aurier had to share responsibility of following Robertson and Mané as they did so. Though Liverpool recorded so many shots on goal, many of those shots came from outside of the penalty area or in front of Spurs' defensive line; too few were from dangerous positions. Their winning goal ultimately came after a set-piece.

Tottenham were organised by their manager José Mourinho into a 2-4-4 formation built on central defenders Toby Alderweireld and Eric Dier. Serge Aurier and Ben Davies joined Pierre-Emile Hojbjerg and Giovani Lo Celso in midfield, behind the front four of Steven Bergwijn, Moussa Sissoko, Son Heung-min and Harry Kane. Their hosts, Liverpool, remained in a 4-3-3 in which Fabinho and Rhys Williams featured in a less-familiar central defence.

Jürgen Klopp's team attempted to apply a high press via Sadio Mané and Mo Salah pressing Alderweireld and Dier; behind them, Roberto Firmino sought to screen Hojbjerg, and Liverpool's midfielders pressured him from further back. Mané and Salah pressed the outside shoulder of Alderweireld and Dier to force possession back inside or clipped passes into Aurier and Davies, at which point intense pressure came from either a wider midfielder or full-back.

In the absence of Virgil van Dijk, Spurs played aerial balls towards Liverpool's back four for their attacking players to contest and follow with runs in behind in the pursuit of a potential flick-on, and doing so led to promising goalscoring chances for Bergwijn and Kane. With their defensive structure so deep, they also played forwards early during moments of transition in an attempt to counter when Liverpool lacked balance, but if their equalising goal came on the counter, Liverpool otherwise impressively managed defensive transitions.


The hosts attempted to apply a counter-press that involved those near the ball at those moments of transition pressuring the ball carrier, and those further away prioritised recovering their defensive positions and screening threatening passes. That they did so effectively undermined Spurs' normally significant abulity to counter.

Mourinho's team, regardless of having so little possession and fewer attempts on goal, created the superior goalscoring chances. They perhaps should have taken the lead during the second half.