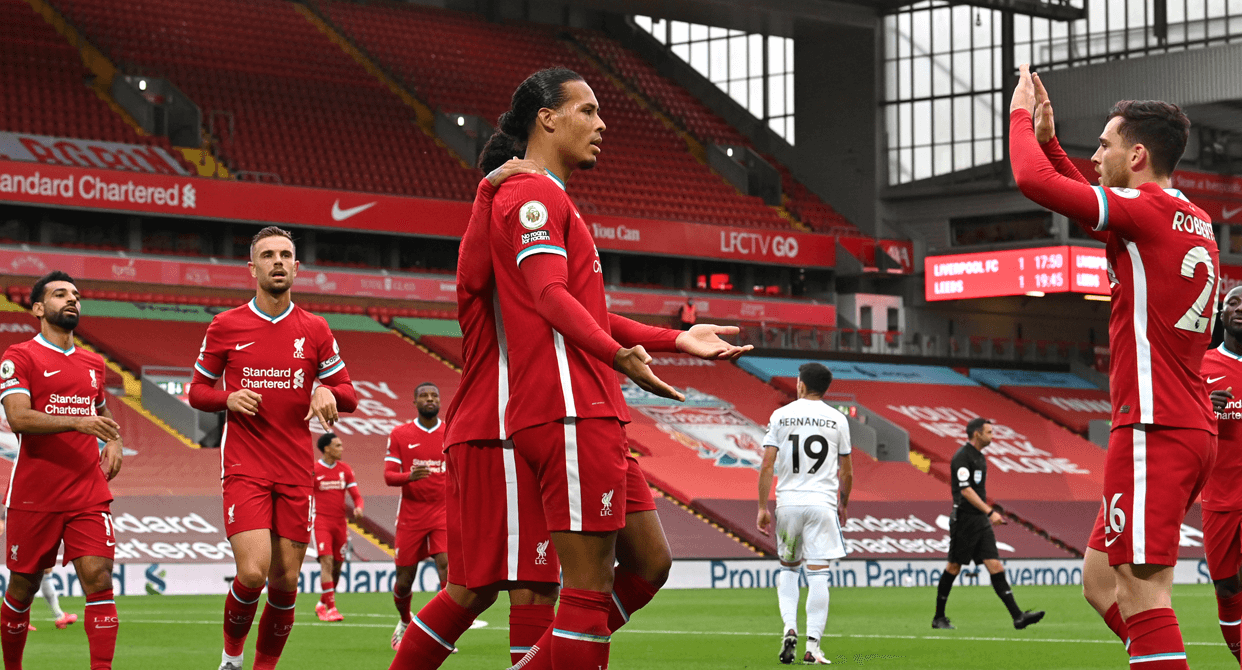 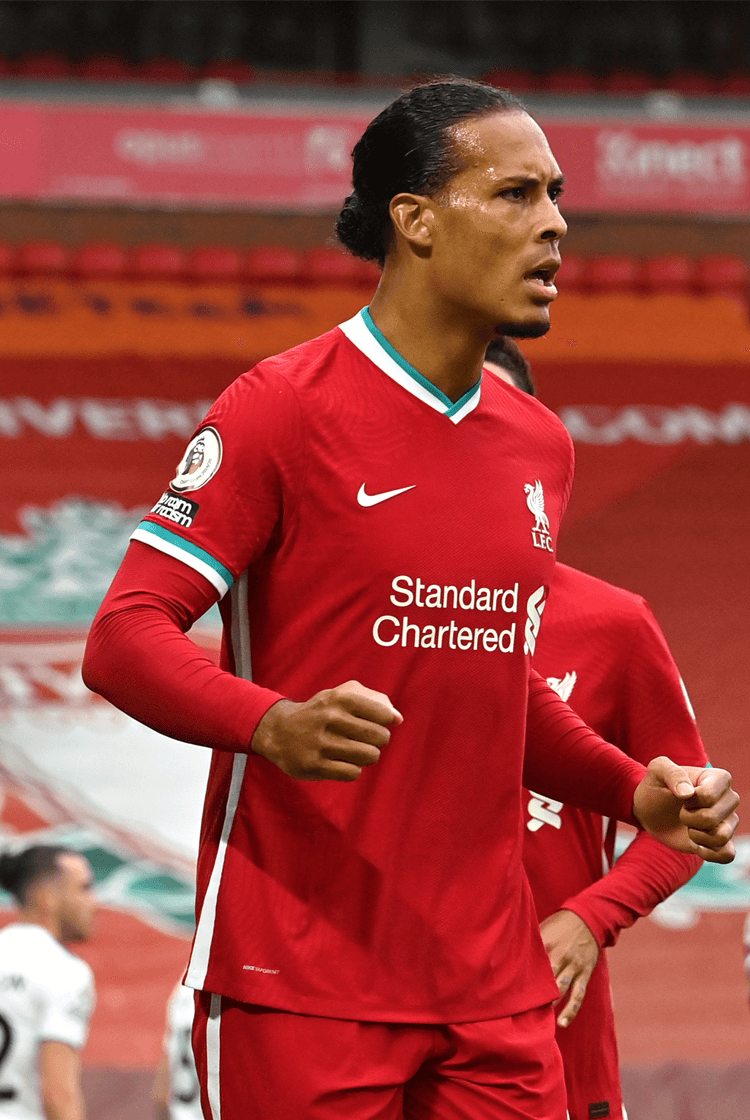 Profile
The £75m signing of Virgil van Dijk in January 2018 marked the turning point for Jürgen Klopp’s Liverpool. After finishing fourth, Liverpool recorded in 2018/19 what was then the third-highest ever Premier League points tally before storming to their first title in 30 years in 2019/20. In both of Van Dijk’s first two full seasons, Liverpool had the best defence in the Premier League, and in that time he has established himself as the world’s best central defender.

“He’s special,” Klopp said of the player he made the world's most expensive defender when buying him in his prime at the age of 26. “The combination of skills is absolutely special. His mindset on top of that is really special. We knew when we signed him that we would get a really good player, but the package is so special. We had no idea (quite how good he would be), and that makes it really, really exciting.”

Tactical analysis
The value of Van Dijk’s leadership has been evident from the moment he joined. His presence has both helped turn Liverpool’s defence into the best in the country and also contributed significantly to the development of Joe Gomez and Trent Alexander-Arnold. He is a constant source of information, reassurance and encouragement to his defensive teammates – a quality that has arguably been missing since the departures of Sami Hyypiä and Jamie Carragher, and which will also have helped Alisson to settle as well as he has at Anfield.

His positioning is one of his greatest strengths. Rarely will Van Dijk be caught out of position and running to try and catch up with play. He will almost never be forced to go to ground to make a tackle.

Instead he anticipates danger and makes interceptions far more often than tackles. He trusts his judgement and will move towards play to steal the ball ahead of an opponent whenever possible (below). Under high balls he likes to get tight to his opponent, using his body and arms to manoeuvre players out of his path so that he can get to the ball cleanly.

If an attacker manages to get it under control and do what few players manage to do in holding Van Dijk off, the Dutchman will hold on to his opponent and ensure play is forced away from goal. He will also give opponents a nudge towards their own goal, thereby ensuring he has a head start if the attacker then turns and makes a run in behind, even if he is quick enough that he can rely on his own pace.

He uses his height well and is extremely effective in the air, winning the vast majority of aerial duels he contests and ensuring opponents rarely win flick-ons against him. He is also adept at controlling his headers so that he finds a central midfielder, who will quickly play a safe pass to secure possession.

That, similarly, makes him a huge threat at attacking set-pieces, and by a distance Liverpool’s greatest asset from dead balls. They therefore set up to try and create a situation in which Van Dijk can thrive. The job of Roberto Firmino, Sadio Mané and Fabinho is to hold or block the runs of defenders who might challenge Van Dijk, and Mo Salah will usually make the opposite run to Van Dijk to take a defender with him. He is usually the target (below), and it works – all but one of Van Dijk’s first 10 goals for Liverpool came with his head.

Role at Liverpool
Van Dijk’s role for Liverpool is that of a leader. Despite being right-footed, he plays on the left side of central defence, and is perfectly comfortable there. He exudes confidence, and brings an important calming presence to the heart of Liverpool's defence.

He marshals their defensive line and therefore plays a key – if subtle – role in Liverpool’s counter-press, pushing their aggressive, high line forwards to reduce the amount of space opponents have to play in. Though that is naturally led by their front three and supported by a mobile and dynamic midfield and their two full-backs, Van Dijk squeezes that defensive line forwards whenever possible to make his teammates’ jobs that bit easier.

He is daring when doing so, and also happy to be left, along with centre-back partner Gomez, as the only two players on the halfway line – even if that means Liverpool are left two-on-two at the back following a clearance. He and Gomez are quick enough that they are rarely beaten with a ball over the top, and Van Dijk is rarely dribbled past, so Klopp can afford to be daring with the positioning of his central defenders. That can sometimes even be problematic, with Van Dijk so intent on holding a high line that he can be caught out (above) taking a high-risk approach in stepping forwards rather than chasing back.

In possession, though Liverpool tend to build patiently, Van Dijk has the ability to play a killer pass straight into the path of a forward – usually Mané, who comes infield off the left – with a clipped ball over the top. Given, on the ball, he is the better of Liverpool’s two centre-backs, opponents often press Van Dijk and leave Gomez free to carry it out of defence. For that reason, Van Dijk has to be smart with the direction he takes his first touch in, and has to pick his moments to step into midfield with the ball. He also plays an important role in securing possession following a regain at the back – doing so allows Liverpool's attackers to make their recovery runs at a more leisurely pace.

If there is to be one criticism of Van Dijk, it may be that his assuredness sometimes veers too close to over-confidence. He is sometimes too lax in possession, and has occasionally been caught out, as he notably was for Patrick Bamford’s goal in the win over Leeds at the start of 2020/21.

He is such a formidable defender because he barely makes any mistakes, and he must ensure that they remain as rare as they are. It is testament to his ability and the impact he has had at Liverpool that there is no discussion of the fee paid for him – he could have cost £200m and it would still have been worthwhile. He truly has been transformational for Klopp and Liverpool.