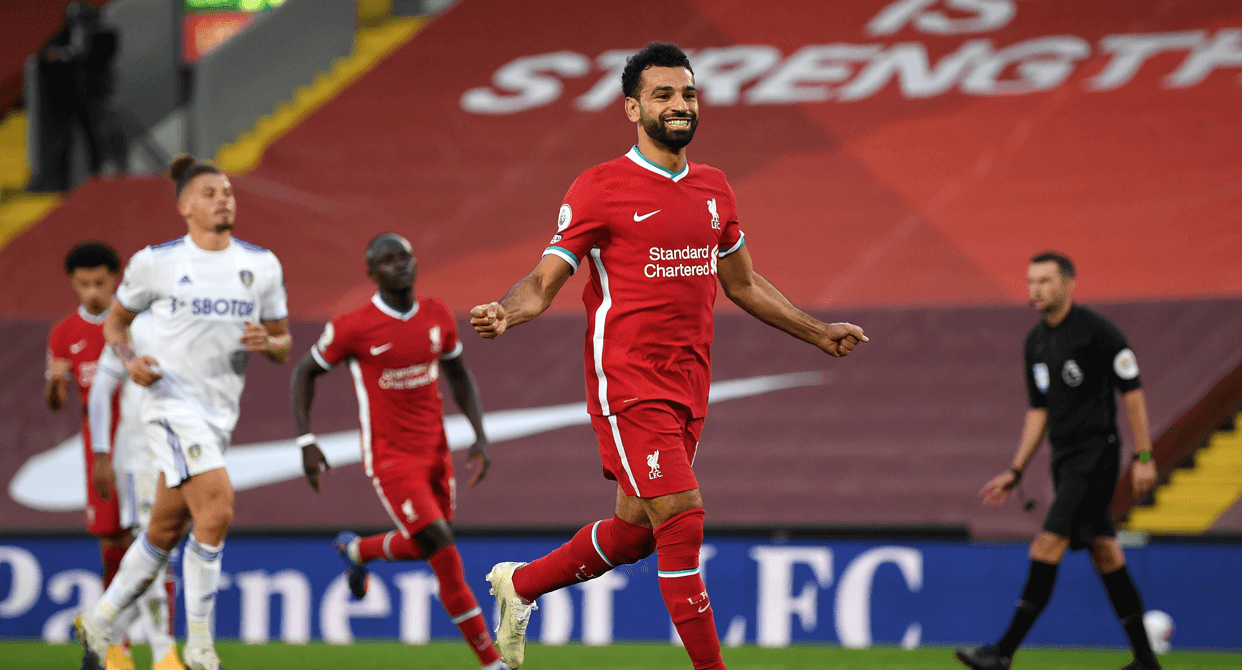 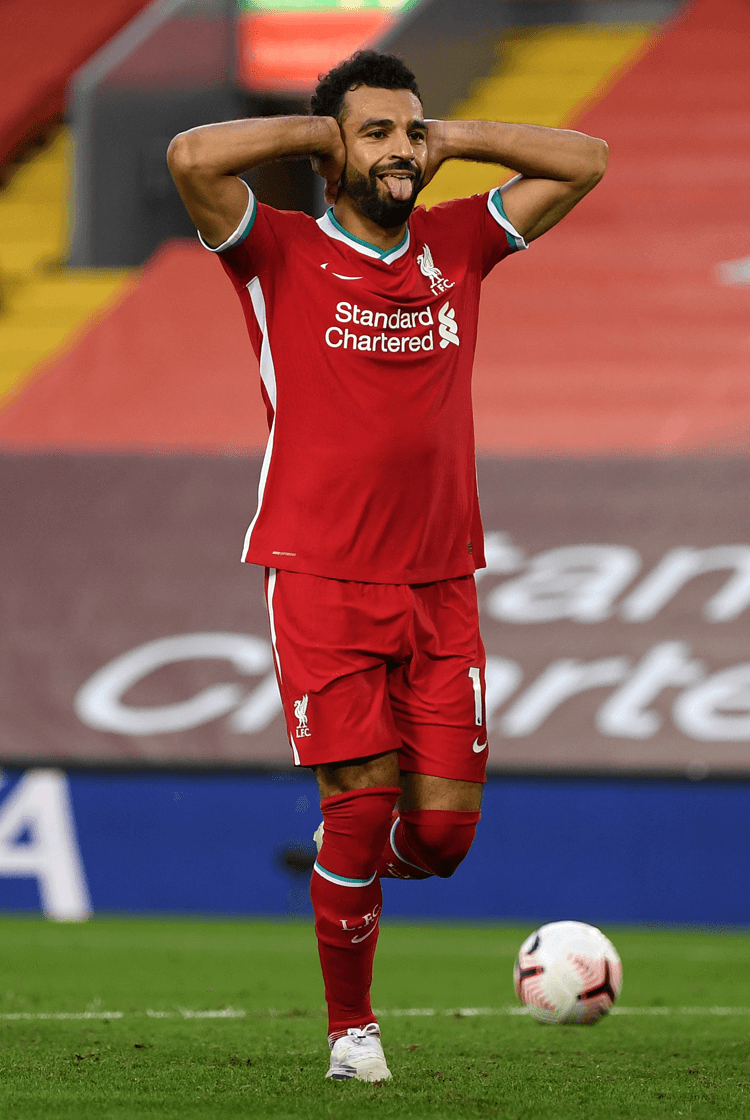 Leeds marked their return to the Premier League by testing defending champions Liverpool to the extent Jürgen Klopp's team required an 88th-minute penalty from Mo Salah to secure all three points. Liverpool had led three times before then – in the fourth minute from Salah's penalty, then following Virgil van Dijk's header and a further finish from Salah. Each time Leeds responded, with goals from Jack Harrison, Patrick Bamford, and then Mateusz Klich. "To be able to score three goals is a positive thing," said Leeds' manager Marcelo Bielsa. "We also cannot ignore we conceded four goals. A lot of those goals could have been avoided. You can't predict football but there are situations you know are going to happen – just because you know they are going to happen it doesn't give you the security you can stop them happening." Klopp said: "We will not go home and have a few beers on that result. We need to analyse it. Leeds are special. They performed outstandingly and it was very difficult - for 95 minutes, by the way." 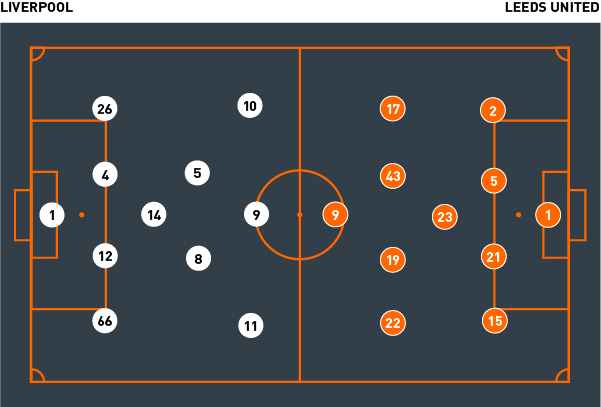 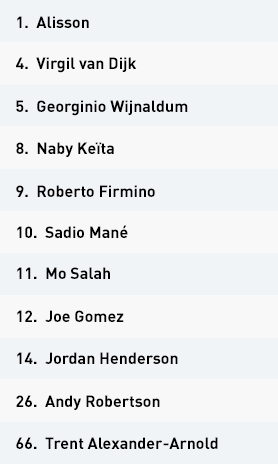 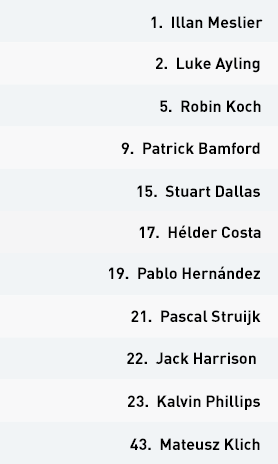 Liverpool were organised into a 4-3-3 formation by their manager Jürgen Klopp. They encountered opponents who set up in a 4-1-4-1 shape, led by Patrick Bamford and with Kalvin Phillips between defence and midfield.

Leeds applied, at a high intensity, an aggressive man-oriented system that ensured the quick tempo that existed throughout. By sacrificing a player in the final third, they had an additional one in defence against Liverpool's influential front three; their refusal to allow Roberto Firmino to freely move into midfield meant that the ball-side central defender always followed him there. When that created an increased space between the other central defender and the ball-side full-back, Mo Salah began to make runs into it – but Leeds improved at closing that space, and Liverpool struggled to find alternatives.

Virgil van Dijk and Joe Gomez exchanged passes with Alisson to bypass Bamford, but once past Bamford it was harder to progress possession. Longer passes were attempted, but Leeds defended well against them, and Leeds' man-oriented defensive approach discouraged passes into midfield; it was that same approach that Liverpool used to manipulate Leeds' positioning, creating direct passing lanes from defence to attack.


The hosts particularly favoured playing diagonal passes to Salah's feet, so that he could run at Stuart Dallas, Leeds' left-back; when doing so, he was capable both of beating Dallas on the outside before crossing, and driving inside and attempting to combine with a teammate. It was when he did either that Liverpool posed their greatest threat.

Liverpool advanced into the final third regularly, but once there they were indecisive and lacked the fluidity and combinations that so often give them such potential. Of their four goals, two came from the penalty spot, one from the first phase of a set-piece, and another from the second phase of a set-piece. Their normally reliable transitional threat was too often undermined by a lack of quality on their passes, their movements and their attempts at goal.

The visitors sought to build from defence more conventionally than they did in the Championship, where Stuart Dallas drifted from left-back to move inside and they instead did so with a back three. This time their full-backs represented an out ball against Liverpool's press, which prioritised the outside shoulder of Leeds' central defenders, and featured Roberto Firmino attempting to screen passes into the influential Kalvin Phillips. When those full-backs were accessed, often by drawing Mo Salah and Sadio Mané, Klich and Hernández were often freed up further forwards.

The four supporting Bamford used movements designed to unbalance Liverpool's defence, particularly towards the left; Joe Gomez struggled against those, so diagonal passes were often sent to the outside of his right shoulder and were met by a diagonal run from infield. Rotations offered by Dallas, Harrison and Klich towards the left also tested Gomez, drawing him out of position and creating a space that was then targeted.


Klich and Hernández regularly operated on the same side of midfield, creating an unbalanced structure, but also testing Liverpool. Klich's movement was particularly intelligent, and directed against the line of the ball and therefore where Liverpool's players were watching, taking him into blindside positions that were difficult to monitor. Their third equalising goal arose from those movements.

In the same way that there were positional rotations between that four and Leeds' full-backs, Bamford also drifted into wide areas to encourage penetrative runs from those behind him. Bielsa's team committed numbers to attacks, which contributed to the success of their combinations.

At 3-2, Liverpool attempted to lower their line of engagement and to operate in what was closer to a mid-block, to develop a compactness intended to limit Leeds' attacking threat. When Leeds regardless scored their third goal, Liverpool again reverted to applying their high-intensity press further forwards.