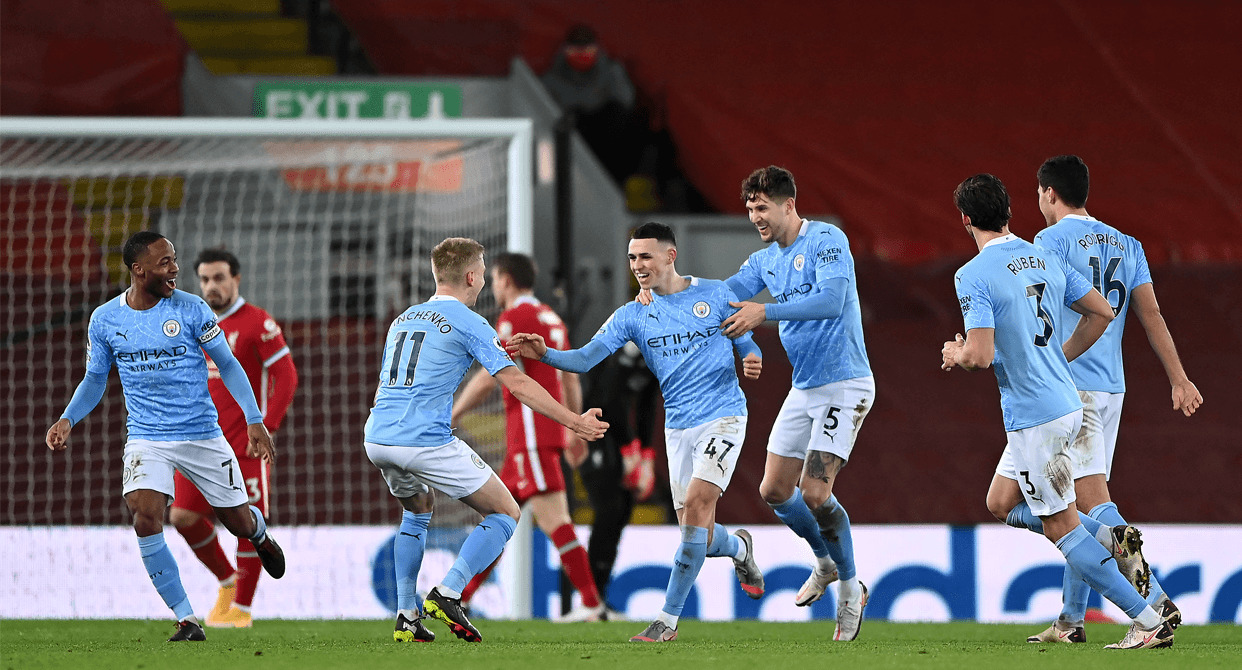 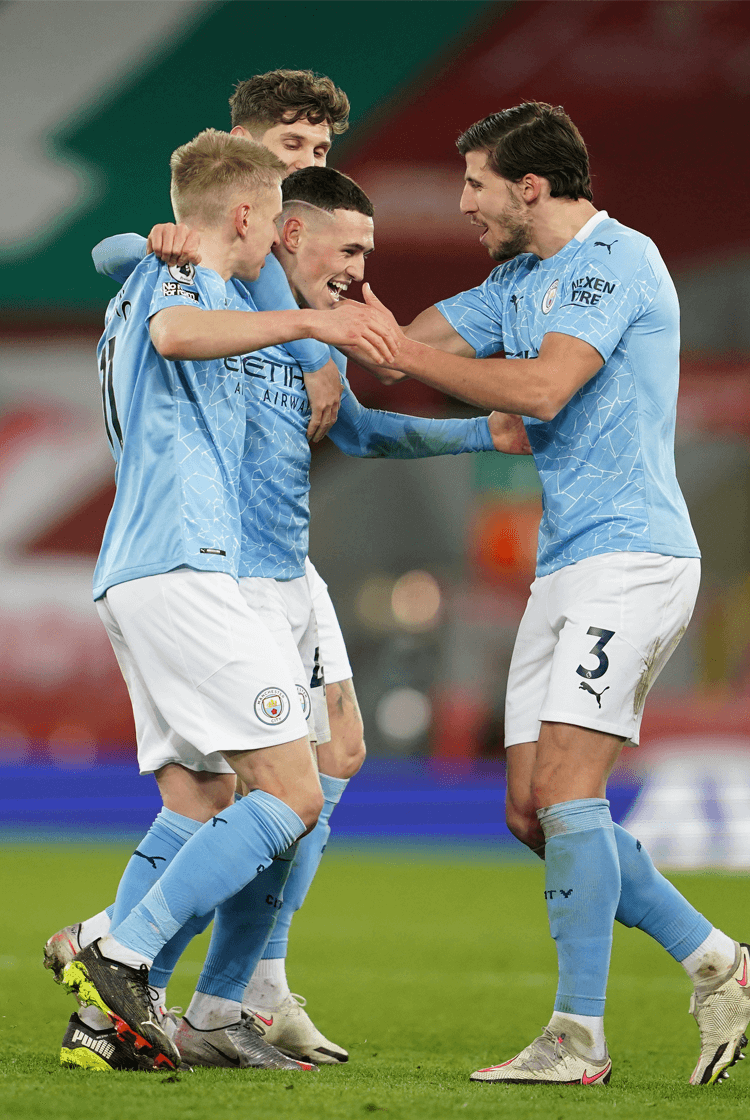 Manchester City extended their winning streak to 10 consecutive Premier League games – and 14 in all competitions – with a victory at Anfield that took their lead at the top of the table to five points with a game in hand. Despite City impressing, in particular through the 20-year-old Phil Foden, who scored one goal and made another, Liverpool were made to rue two huge mistakes from their goalkeeper Alisson. At 1-1 the Brazilian gifted possession to City's attackers in dangerous positions, leading to the visitors’ second and third goals, before Foden’s brilliant individual effort put the result beyond doubt. “I saw a really good game and big mistakes,” said Jürgen Klopp. “In each game, when you make these kind of mistakes, it's very likely you concede goals.” “In the second half, the way we reacted to the goal,” said Pep Guardiola. “The way we played with quality, made the difference. For many years we were not able to win here. Hopefully next time we can do it with people. Anfield is so intimidating.” 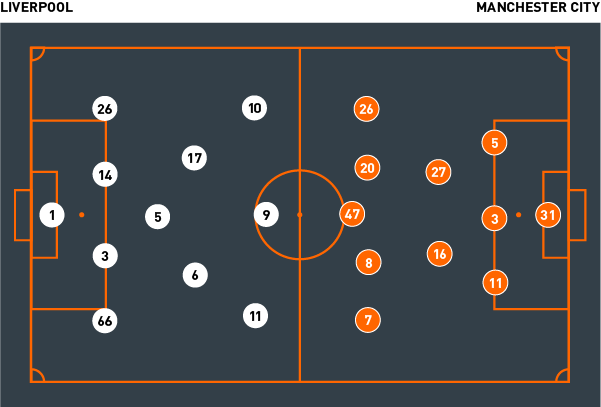 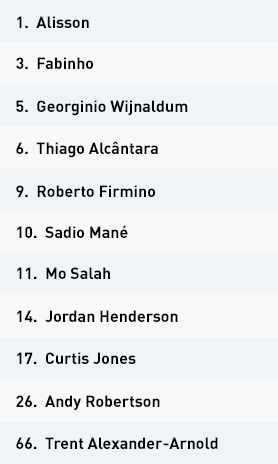 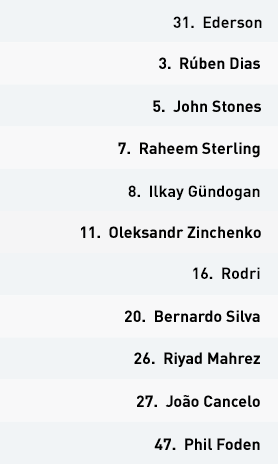 Liverpool set up in a 4-3-3 formation with Fabinho and Jordan Henderson at the heart of the defence, and Thiago Alcântara, Georginio Wijnaldum and Curtis Jones in midfield. Manchester City used a 4-3-3 when out of possession. Liverpool had to be patient in their build up and looked to try to play through midfield where possible. City pressed Liverpool by using wide forwards Raheem Sterling and Riyad Mahrez to close down Fabinho and Henderson, respectively, doing so from the outside, and thus forcing them infield, to stop direct access to Liverpool's full-backs.

Phil Foden occupied Wijnaldum but also moved out to close down Alisson if the distance was small enough and he had sufficient support around him to back up the press. Ilkay Gündogan and Bernardo Silva stayed narrow, creating a compact area in the middle of the pitch for Mahrez and Sterling to try and show play towards. Liverpool initially had very limited success in moving forwards through the middle of the pitch, and their forwards provided limited threat to the space in behind. As usual, Roberto Firmino dropped into the central areas to try to create an overload in midfield, but he was tracked by Rúben Dias, allowing City to maintain numerical parity – and sometimes even a numerical advantage when Foden occupied Wijnaldum. Liverpool tried using shorter passes at the back to draw Foden out of that position.


Liverpool began looking to access the wide areas and immediately looked more threatening. They did so by advancing centrally with a centre-back in possession to make City's structure narrower, before switching play out to the full-backs who were keen to get forward. Once wide, Liverpool looked to use the quality of Trent Alexander-Arnold and Andy Robertson to deliver crosses into the area, but City managed to deal with them well. While the crosses from Robertson appeared to be of a higher quality, it was the movement from Sadio Mané on the left that made the deliveries from the right more threatening – the Senegalese made darting runs into the middle on his opponent’s blindside.

At half-time, Pep Guardiola opted to switch to a 4-4-2 out of possession with Silva and Foden leading the line. Doing so allowed City to continue to apply pressure on the centre-backs while also occupying Wijnaldum, but crucially the four across midfield provided greater coverage across the width of the pitch, thus reducing the threat that Liverpool posed from the wide areas. Liverpool adjusted by having their front three drop to increase their presence centrally, which made City's midfield become narrower, therefore once again opening up space out wide for Liverpool’s full-backs to advance into.

Liverpool also began looking to play longer passes in behind from deeper areas in the second half and it was through that approach that they won a penalty and scored their only goal. Despite Liverpool’s success at progressing in the wide areas and an occasional threat to the space in behind, they rarely troubled Ederson. Instead, their own goalkeeper, Alisson, proved their downfall, with some uncharacteristically poor play when building from the back. He gifted the ball to City in dangerous areas on a few occasions, and those errors led to City’s second-half goals.

Manchester City’s formation was a 4-3-3 on paper but a 3-2-5 in practice. John Stones, Rúben Dias and Oleksandr Zinchenko formed their back three. João Cancelo and Rodri played in midfield, and Riyad Mahrez, Bernardo Silva, Phil Foden, Ilkay Gündogan and Raheem Sterling formed their attacking quintet. Liverpool used a 4-3-3 formation when out of possession.

Liverpool used a similar press to City in that Mo Salah and Sadio Mané pressed Dias and Stones from the outside in an attempt to force play infield. Roberto Firmino occupied Rodri, while Liverpool’s midfield three focused on the movements of City’s attacking players, who took turns to drop into midfield.

Cancelo’s movement diagonally infield to form a double pivot with Rodri is something that has been used regularly by Pep Guardiola but was particularly effective against such a press. Mané’s pressing line to the outside shoulder of the centre-back was designed to screen the full-back, but when that full-back – Cancelo – had moved infield, Mané was showing the ball-carrier directly into the passing line that led to Cancelo’s new position.


That opened up the opportunity for one of City’s attackers to drop into the vacated full-back position, asking a question of his direct opponent as to whether to leave his positional slot and risk leaving a gap behind him, or to remain in position and leave the opponent to receive the ball free from pressure. City's player in the newly-created full-back position could be accessed by a bounce pass from Cancelo, or directly from the centre-back if Mané changed his pressing angle to block off passes into Cancelo.

Further forwards, City’s front five used movements in contrasting directions to try and pull Liverpool apart. Each player tried to make the opposite movement to the player next to them. For example, when Sterling, Foden and Mahrez made runs in behind, Silva and Gündogan dropped towards the ball. Liverpool's midfield three often became more narrow due the number of opponents in central areas, often leading to easy access to the feet of Sterling and Mahrez out wide, and both City wingers were instructed to run at their full-back opponent. Sterling enjoyed a lot of success against Trent Alexander-Arnold, including in the lead up to a first-half penalty being awarded.

The introduction of Gabriel Jesus meant Foden moving out to the right and continuing the work that Mahrez had been doing – dribbling at Andy Robertson at every opportunity. The use of inverted wingers should really have shown that City were looking to move infield once wide, particularly as their full-backs rarely overlapped, but Liverpool were regularly undone by that approach.