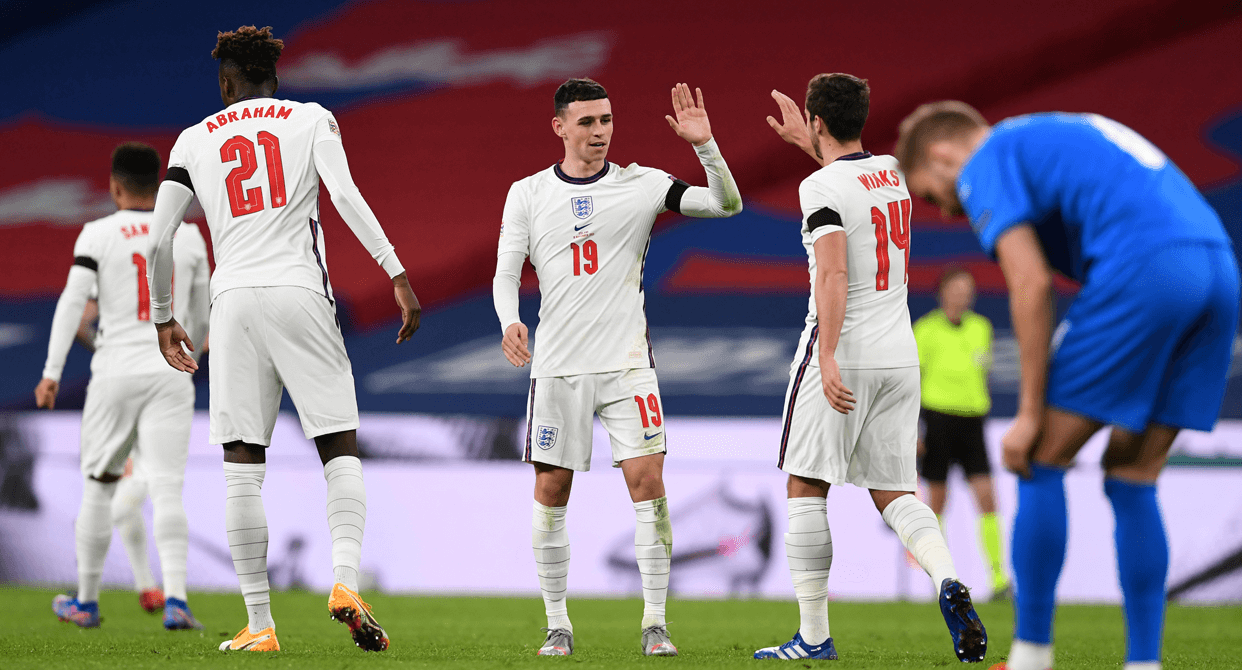 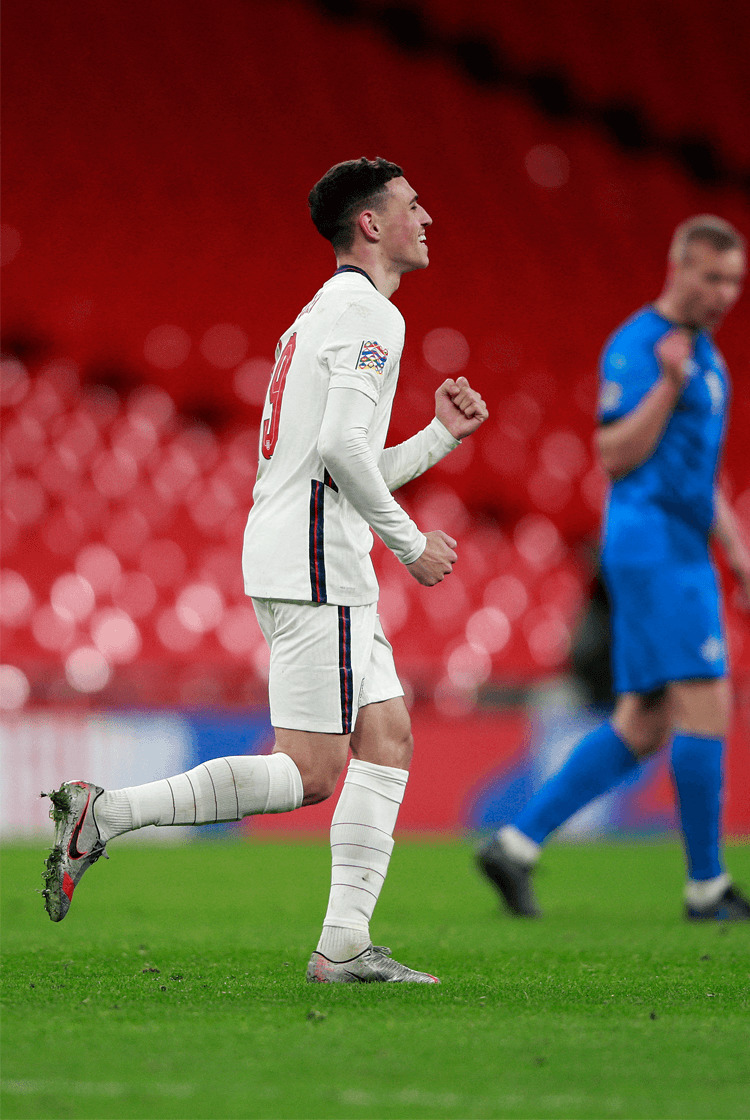 England's Nations League campaign concluded with a convincing victory over Iceland in which Phil Foden and Jack Grealish, particularly, suggested they both have as promising a future in international football as they do for their clubs. Childhood friends Declan Rice and Mason Mount, partnered together in central midfield, scored England's two first-half goals, and after Birkir Saevarsson was dismissed early in the second half when he was given a second yellow card, Foden added two further goals to widen the margin of victory for Gareth Southgate's young team. "We are trying to build and improve all the time," the manager said. "There was some lovely football. It was good to watch and for the young players to get the goals was very special for them. (Foden) is such an exciting player. We knew what he is capable of and it was good to get him into the game against Ireland and to get the two goals was a glimpse for everyone of what he is capable of." Iceland manager Erik Hamren said of the team that beat his: "They are very good, so maybe in four or five years they will be a top team." 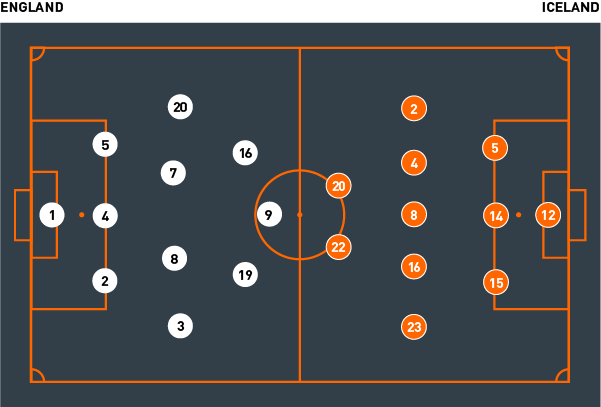 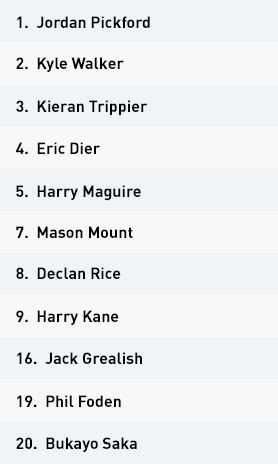 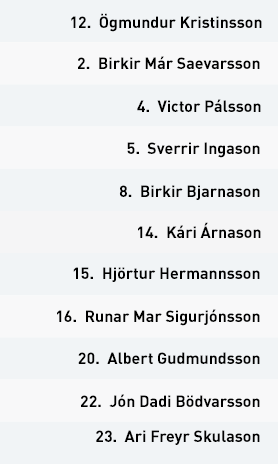 England were organised by their manager Gareth Southgate into a 3-4-3 formation led by the front three of Phil Foden, Harry Kane, and Jack Grealish. They encountered opponents who defended with a 5-3-2.

They enjoyed near-total control of what was unfolding, and therefore spent their evening attempting to break down a team seeking to remain compact in central areas, and who encouraged them to have possession. Iceland were content for England's wider central defenders to take the ball, and when that was they case, their front two worked to prevent passes to Eric Dier, and to occupy Declan Rice, instead preserving the positioning of Iceland's three central midfielders, even if Victor Palsson remained keen to move early to press the advancing central defender.

England built with three central defenders behind the ball, and behind Rice, who provided the link between defence and attack. Mason Mount, alongside him in central midfield, was more attacking, and alongside Kieran Trippier, Bukayo Saka, Foden, Kane and Grealish, contributed to the six points of attack Southgate's team offered. When longer passes into the runs of Trippier came to little, Grealish, Mount and Foden combined to create an increasingly fluid midfield by withdrawing to towards the ball and into the half-spaces to receive possession; Grealish, turning and attacking one-on-one, offered particular potential.

The threat he posed – one often matched by Saka and Foden – drew numerous fouls and therefore meant numerous free-kicks, including that from which England took the lead, and another in the second half that meant Birkir Saevarsson being sent off after a second yellow card. Those movements in midfield also forced Iceland's midfielders to become even more compact, leading to England switching play to the relevant half-space or wide area, regularly giving them both an attacking midfielder and wing-back outside of Iceland's midfield.


During their most recent fixtures, England's wider central defenders have started to offer overlapping, off-the-ball runs, and Harry Maguire did so again when play was being switched from the right to the left, complementing the fluid movements that existed in front of him. Through Kane and Grealish – occasionally together – vacating their positions, Saka moved infield, and Maguire advanced outside of him. Iceland struggled with England's blindside movements, so those patterns proved particularly problematic.

Against Belgium, Southgate's team had previously offered too few penetrative runs in behind, and it was apparent that there was an increased emphasis on them doing so. Their forward runs were triggured by horizontal passes that drew Iceland's attention and left them vulnerable against runs on their blindside; England's third goal provided a fine demonstration of that.

When Iceland were reduced to 10 men and instead adopted a 5-3-1, their struggles to defend increased. That only one forward was available to press England's back three meant that Maguire and Kyle Walker, or his replacement Tyrone Mings, almost permanently advanced to operate as holding midfielders in the half-spaces in front of them; Maguire regularly made forward runs, and even threatened to score. Despite scoring four times, Southgate will be aware that his team had sufficient chances to win by a wider margin, that Walker made mistakes in possession that a superior team would have punished, and that Jordan Pickford's distribution was erratic, and could also have been punished.

Erik Hamren set Iceland up in a 3-5-2 formation built on the back three provided by Sverrir Ingason, Kari Árnason and Hjortur Hermannsson. Their hosts, England, defended with a 5-2-3, through Kieran Trippier and Bukayo Saka withdrawing from midfield and into defence.

Iceland offered minimal attacking threat, as their total of two efforts on goal – neither of which stretched Jordan Pickford – demonstrates. They adopted a direct approach, and sought to compete for the second ball after longer passes were played. Birkir Bjarnason remained the deepest-positioned of their midfielders, in an attempt to protect the defence behind him and to offer a deeper option amid headed clearances from their long passes.


They also sought to passes in behind on the right, and into the runs of Birkir Saevarsson and Victor Palsson, who worked to play crosses into the penalty area. On the occasions they instead played out from defence, they struggled, and often lost possession inside their defensive half, inviting England to attack during moments of transition.

Phil Foden and Jack Grealish were instructed to press from the outside, funnelling possession into the central areas England would then work to regain it in. Gareth Southgate's team was also competent at negative transitions; they were quick to apply pressure to the ball when it was lost, and recovered with numbers to deny Iceland the chance to counter.