Profile
If Declan Rice continues to so strongly influence the vast improvements being seen at West Ham, he can also become increasingly significant for Gareth Southgate and England. He has featured regularly since committing to England over Ireland and, given Jordan Henderson is perhaps at his very best as a box-to-box midfielder and concerns that Eric Dier is in decline, he increasingly appears to represent the most natural defensive midfielder Southgate has.

Most recently, in combining with Tomas Soucek in midfield, he has been central to the transformation in West Ham’s fortunes since the return of David Moyes. “He is arguably the best holding midfield player in the country and the best thing about Declan is he will get better,” said West Ham’s manager, once so instrumental in Wayne Rooney’s development at Everton. “Declan is carrying a lot of the team.”

Tactical analysis
Rice is a defensively minded player. His conversion from a central defender into a defensive midfielder – where he has shown a developing talent for delaying and breaking up attacks, often during moments of transition – demonstrates that. He can jockey in both directions, slowing counters while teammates recover their defensive positions and, therefore, proving particularly valuable to a possession-based team at risk of being exposed during a transition (below).

He is tenacious in midfield, where he is strong in the tackle, combative in the air and alert to loose balls. If that encourages quick regains of possession after losing it, it also invites a team to maintain its attacking shape without the need to transition into a defensive structure. 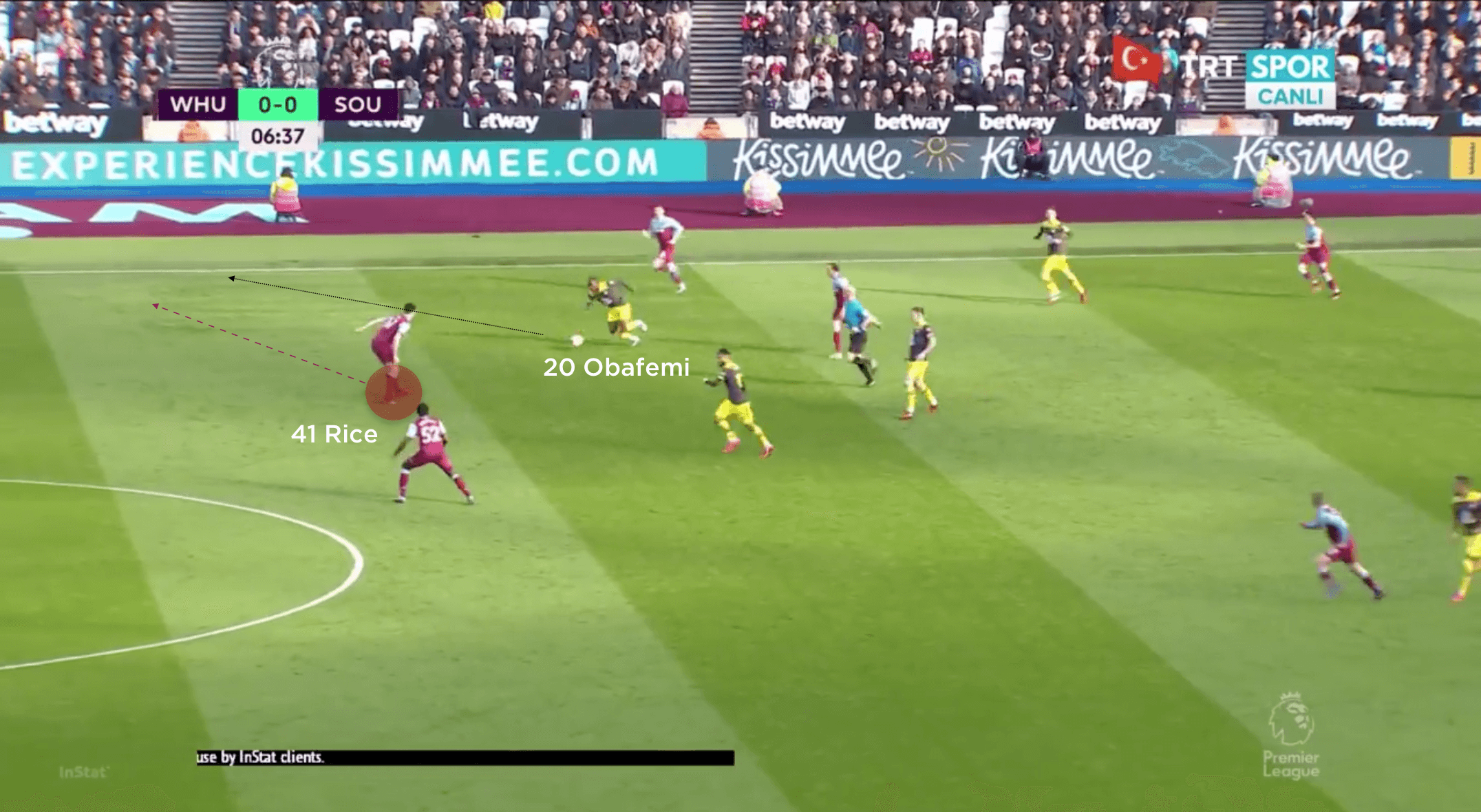 That aerial ability can also be an asset in the final third, especially at set-pieces. His power, timing and desire to attack the ball are fantastic qualities that have yielded goals, so it is little surprise that he has become one of West Ham’s leading targets from dead-balls; there is little reason he can’t develop into a regular goalscorer for both club and country, similarly, perhaps, to John Terry.

Rice’s technique as a defensive midfielder can regardless still improve. He should aim to be more composed amid bouncing balls, especially when he is required to change direction or to play off of his first touch and in advanced positions against opponents remaining in a low block and defending the penalty area as one – the subsequent lack of space that that involves can lead to him demonstrating poor control under pressure. 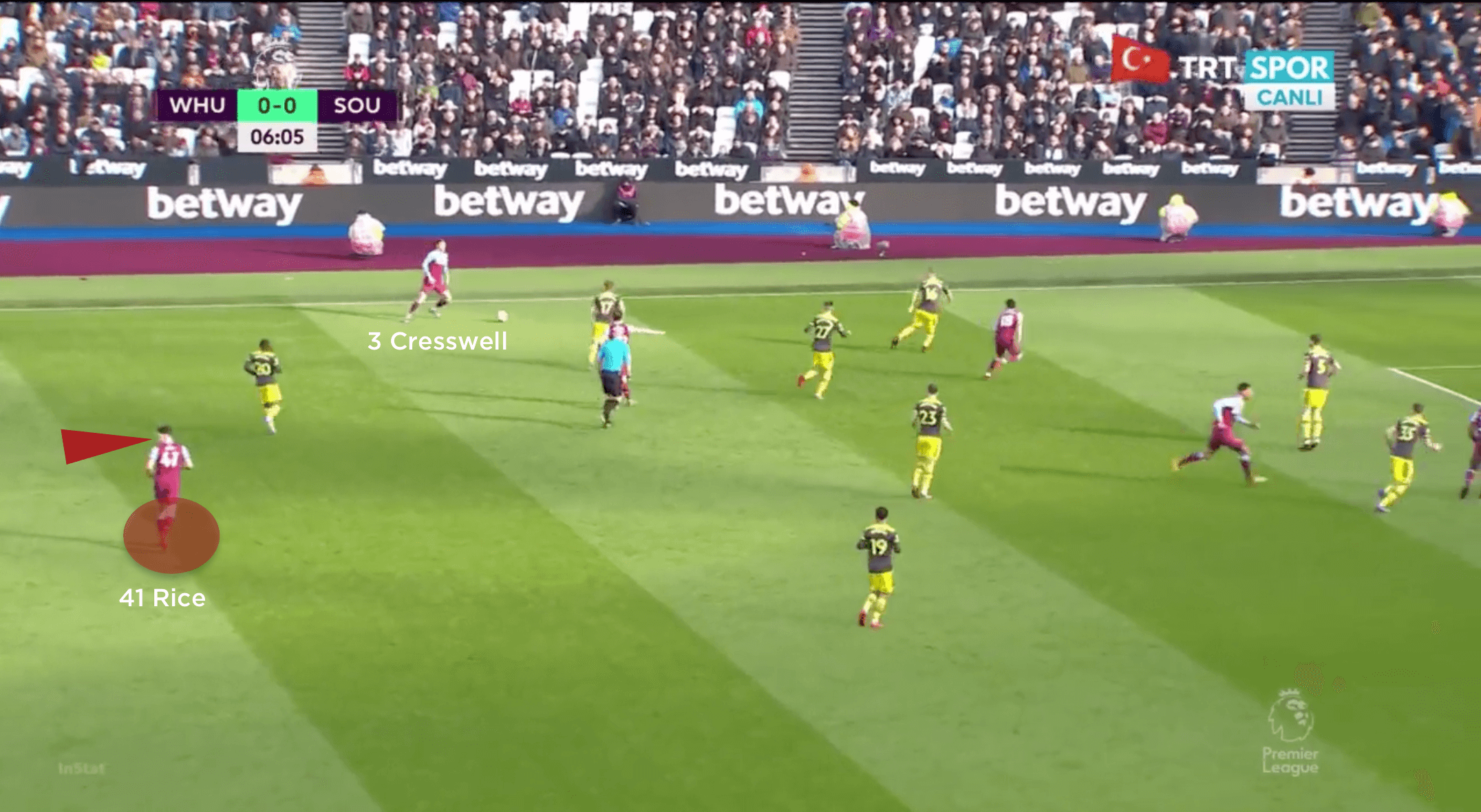 In possession, Rice’s passing ability, over a variety of distances, is improving. Moving from central defence into midfield is a significant change for a young player; his awareness (above) also needs to continue to improve, but it can be expected to. He is composed with the ball at his feet, and capable of linking defence to midfield, often through scanning for and playing the simplest pass. Should he play even fewer hopeful passes, and instead risk more penetrative ones – a trait offered by the finest defensive midfielders – he can become even more influential.

From the left side of a double pivot – perhaps in a 4-2-3-1 formation – Rice’s diagonal passes are accurate and well-judged. Where many would play the ball into an area and hope that the teammate receiving can control it under pressure, Rice adapts to that teammate’s positioning. Any spaces in behind invite a more direct, vertical pass; space around the receiver demands an accurate pass to feet. Rice is capable of playing both, and if he is less effective when playing right to left – including from the right side of a double pivot – he regardless has the natural talent to also improve that. 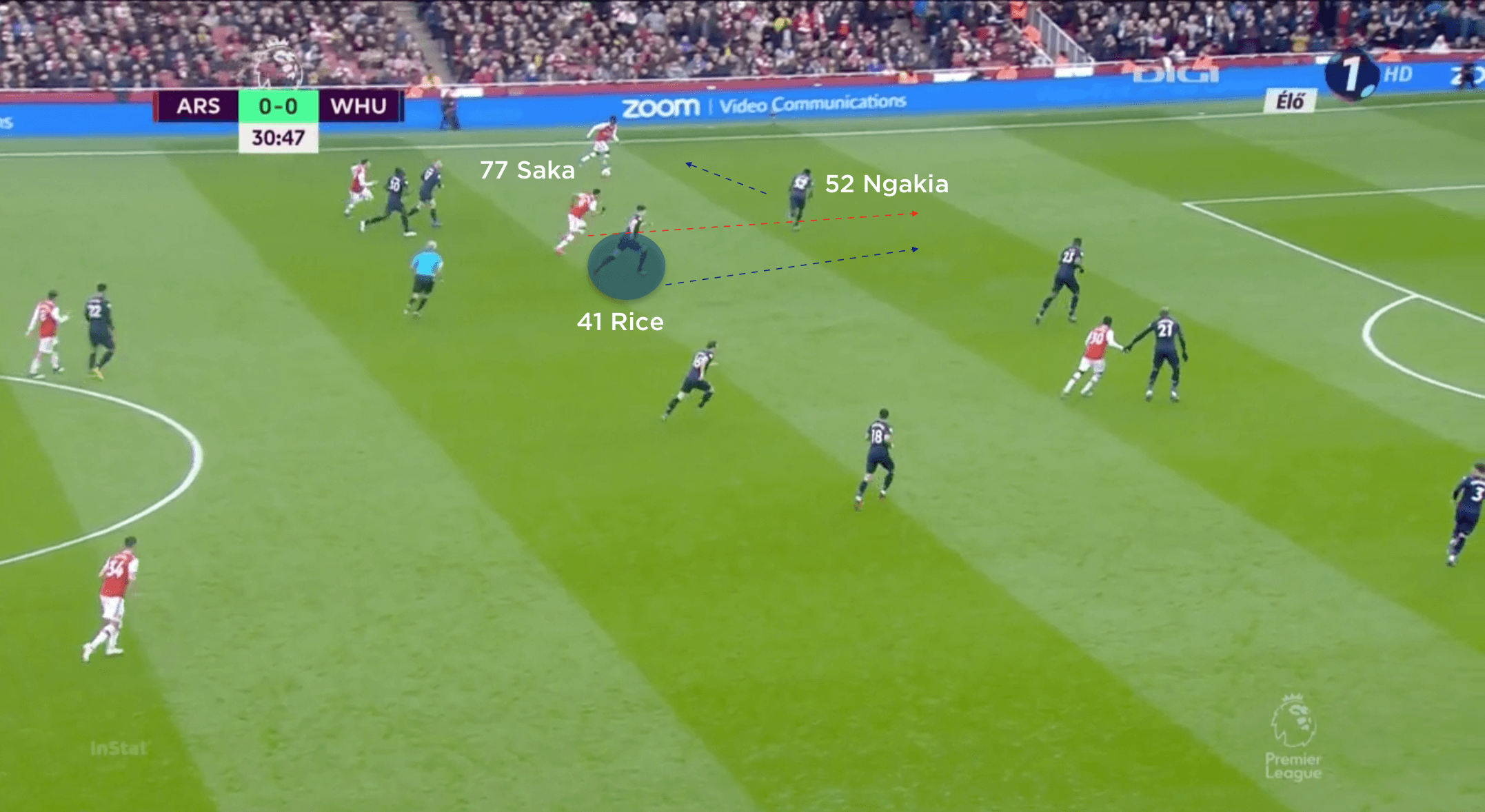 Roles at West Ham
Rice has demonstrated fine positioning when shielding West Ham’s defence, when he prioritises restricting the opposition’s attempts to find the feet of their attackers. He has done so as both a single pivot or as one of two, but so far appears more comfortable as the sole defensive midfielder and when there are two central midfielders in front of him. During transitions he is quick to respond without rushing the relevant decision or action, and his positioning behind the ball when West Ham are in possession means that he will often be the first line of defence when the ball is turned over.

He favours guiding the ball carrier towards the touchline but resists attempting to make a tackle given the risk of being beaten and leaving their defence exposed. Delaying, and guiding opponents towards the touchline. also offers teammates time to recover their positions. Rice is similarly proven at providing cover when his teammates, particularly full-backs, move to engage (above), when he adopts their position or tracks opponents into the vacated space.

In the long term, a defensive midfield role increasingly appears Rice’s best position – particularly given the increasing demands on full-backs to contribute to attacks. Rice’s ability to cover their forward runs – both during phases of building possession and during moments of transition – could be central to that. His experience in central defence will also remain a huge asset. 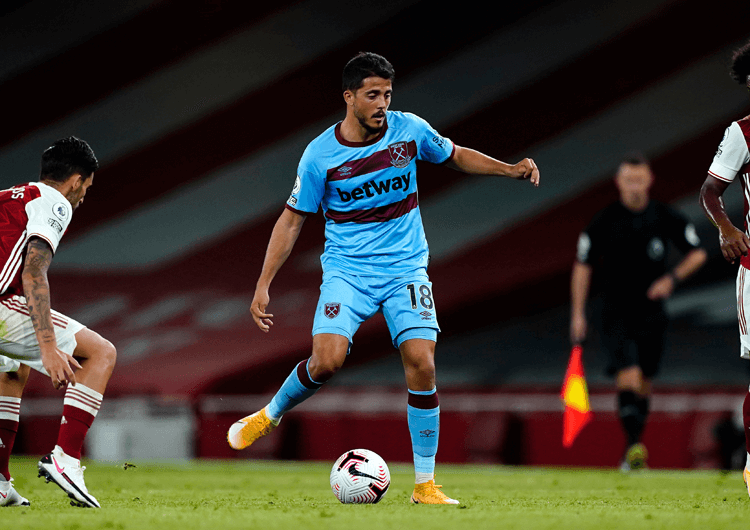 Pablo Fornals is proving influential in the improvement West Ham are demonstrating under David Moyes. Our professional coaches assess his considerable abilities

Chelsea are chasing Champions League glory and hunting down Manchester United in the Premier League with midfielder Mason Mount playing a key role. We assess what he brings to his club side under Thomas Tuchel and England under Gareth Southgate