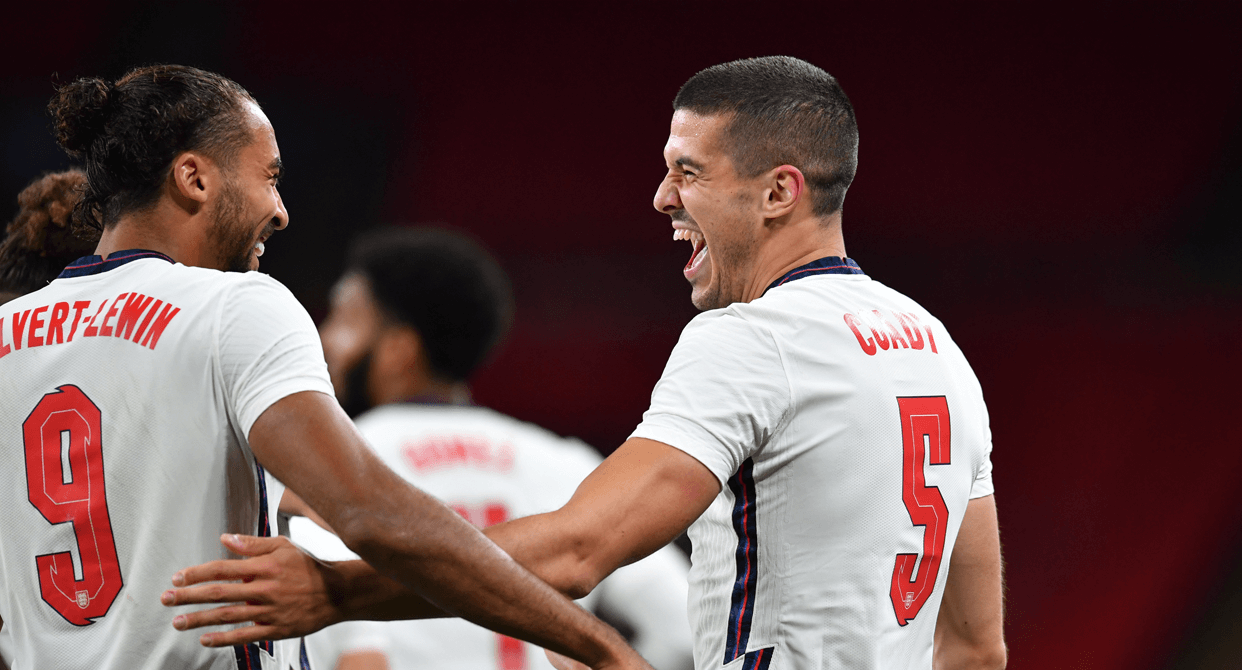 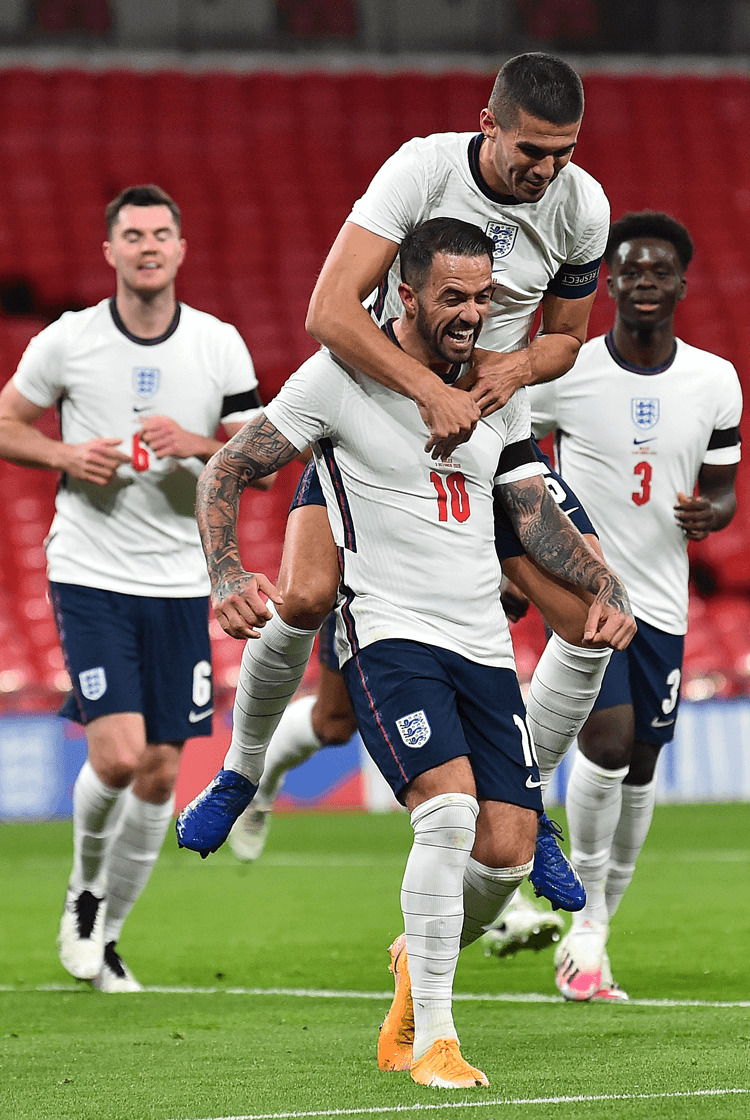 Dominic Calvert-Lewin marked his England debut with a goal as Gareth Southgate's team eased to victory at Wembley. The in-form striker scored for the 10th time in 2020/21 with a header after a delivery from Jack Grealish, another inexperienced international who also impressed. Conor Coady later scored his first international goal when heading in from Kieran Trippier's free-kick, and Danny Ings, making his first start for the national team, put victory beyond doubt with an overhead kick when Tyrone Mings headed into his path. "Whenever we give debuts or get guys who deserve their chance time on the pitch there’s opportunity for them to grab a place and push themselves up the pecking order," said Southgate. "Several did that and there is competition for places." Ryan Giggs said: "The game changed with the goal, and when Kieffer (Moore) went off (injured), we lost that target. Also on set-pieces, where we conceded two bad goals, he's a big part of that, defending set pieces." 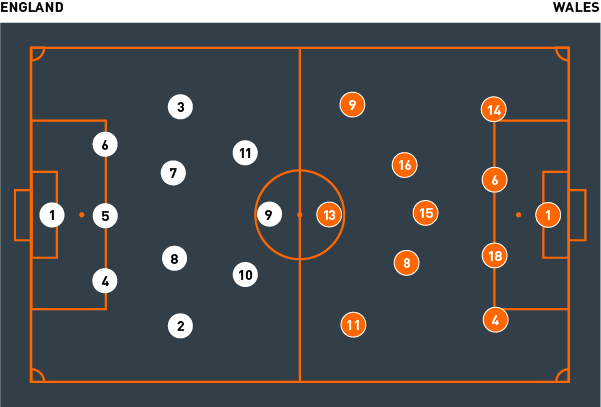 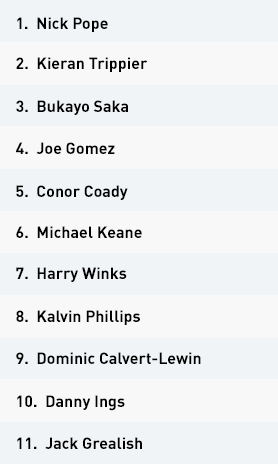 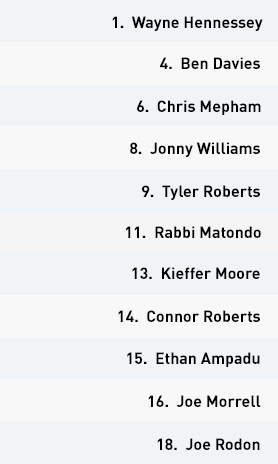 England were organised by their manager Gareth Southgate into a 3-4-3 formation in which Jack Grealish, Danny Ings and Dominic Calvert-Lewin formed their front three. They encountered visitors who defended with a 4-3-3.

Wales also sought to press England high up the pitch, via their three attackers closing down England's three central defenders. Kieffer Moore attempted to force possession to one side, and then Tyler Roberts or Rabbi Matondo moved to the outside shoulder of the furthest central defender, essentially screening passes into England's wing-backs, Kieran Trippier and Bukayo Saka.

England adjusted to find alternative ways to advance through Wales' structure. The comfort with which Harry Winks and Kalvin Phillips received under pressure encouraged those behind them to pass into their feet, and they, in turn, often fed the wing-backs outside of them. Those central defenders and wing-backs also moved deeper, to create a different passing angle that made it harder for Wales' wide attackers to move with the ball and cut off the passing line that existed.

Using Grealish and Ings – later replaced by Mason Mount – in the half-spaces proved even more effective, because of the four-on-three with Winks and Phillips that it created against Wales' midfield and therefore their ability to play directly into Grealish's and Ings' feet. Routine switches of play overcame Ethan Ampadu's attempts to move to the ball-side attacking midfielder.


When England's wing-backs had possession they sought to play passes in behind Wales' full-backs, or between the relevant full-back and central defender, into the diagonal runs of their attacking midfielders or Calvert-Lewin, and then to attempt crosses, as was witnessed with their opening goal via Grealish's run in behind. Wales' central defenders regardless often convincingly shepherded the runner away from the penalty area; though England regularly succeeded through the first two lines of Wales' structure, they often struggled against the third.

The full-backs selected by Ryan Giggs were reluctant to press England's wing-backs unless they were attacking them, contributing to the extent to which Southgate's team succeeded in the first phases of their attempts to build possession. Finding Grealish between the lines also offered potential, because of his desire to turn and dribble, and therefore to draw fouls and win set-pieces. England ultimately scored twice from set-pieces.

At 3-0 down, Wales reorganised to defend with a 4-1-4-1 mid-block in which their wide attackers instead pressed England's wing-backs. England's space between the lines was also limited, contributing to their struggles to progress possession thereafter.

Ryan Giggs set Wales up in a 4-3-3 formation in which Connor Roberts, Chris Mepham, Joe Rodon and Ben Davies formed their back four. Their hosts, England, defended with a 5-2-3, through wing-backs Kieran Trippier and Bukayo Saka withdrawing into defence.

Wales initially had promising spells of possession, but they increasingly found it difficult to progress through England's organised mid-block. Dominic Calvert-Lewin was instructed to screen passes into Ethan Ampadu, and Danny Ings and Jack Grealish applied steady pressure to central defenders Mepham and Rodon while prioritising screening passes to Tyler Roberts and Rabbi Matondo.

With Kalvin Phillips and Harry Winks man-marking Jonny Williams and Joe Morrell, and Saka and Trippier ready to advance to press Wales' full-backs, England were convincingly defending the central areas of the pitch, contributed to possession being regularly circulated between Wales' defenders. If Wales drew Calvert-Lewin further forwards towards a central defender, the ball could be bounced to a full-back and then back inside to Ampadu, but there were also occasions when Winks or Phillips responded by instead taking Ampadu.


Wales' struggles to advance through England's midfield meant that they attempted longer passes in behind to Kieffer Moore, contributing to them gaining some territory and offering some attacking potential, but England's goalkeeper Nick Pope was rarely tasted. After Moore's injury, Neco Williams was introduced and played on the right of their front three; Roberts instead played centrally and sought to offer the same runs as had done Moore.

Beyond those direct passes in behind, Giggs' team struggled to adjust and break England down. Williams offered penetrative runs, and their wide attackers and full-backs would advance, but without the aerial presence offered by Moore their attempted crosses too often came to little.