Profile
Dominic Calvert-Lewin’s ascent has been remarkable. Under the guidance of Carlo Ancelotti, whose arrival at Everton in December 2019 sparked the best form of his career, Calvert-Lewin has matured from a striker who did not regularly score goals into one of the Premier League’s most potent marksmen.

Before the 2019/20 season was interrupted in March, Calvert-Lewin was rewarded by his club with a new five-year contract. His form was also noted beyond Goodison Park, as a player whose goal proved decisive in England Under-20’s World Cup win in 2017 played his way into contention for a place in the senior squad at the delayed Euro 2020.

“Dominic has all the attributes to become one of the best strikers in England and in Europe,” Ancelotti said. “He is fast, has good skills, is strong in the air and works extremely hard for the team. He also has a fantastic mentality, and his desire to improve has impressed me ever since I came to the club.”

Tactical analysis
It is testament to the range of Calvert-Lewin’s talents that he managed to establish himself as a centre-forward at a top-half Premier League team without posing a regular threat on goal. Having failed to score a single goal in 11 League One appearances for his boyhood team, Sheffield United, he managed only 11 in 78 Premier League appearances in his first three seasons at Everton after under-23 coach David Unsworth recommended his signing following their time together at Bramall Lane.

Yet when Ancelotti, one of the world’s most decorated managers, was appointed at the end of 2019 – just ahead of a January transfer window during which he might have provided an added lure to any prospective signings – the Italian looked no further than the present squad. In attack he stuck with a pairing of Calvert-Lewin and Richarlison – despite the Englishman scoring a relatively modest five goals in 16 Premier League appearances in 2019/20 before Everton made their managerial change.

What followed was, to date, Calvert-Lewin’s best ever run in front of goal, with eight goals in the first 11 league games of Ancelotti’s tenure. He has added an impressive goal return to his game, meaning he is beginning to look a brilliantly rounded striker. Having spent a significant portion of his developing years as a central midfielder, Calvert-Lewin possesses good close control, vision and passing – but it is his speed and aerial ability that have most helped his development as a centre-forward.

Given he is also comfortable with the ball on the floor – both coming deep and running in behind – he gives defenders a great deal to think about when they encounter him. Few other centre-forwards possess such an extensive all-round game.

Calvert-Lewin offers an out ball of various types. He can provide flick-ons for a strike partner or supporting runners; he can pull out wide before running at defenders; he can withdraw to link play with a midfielder; he can hang on the shoulder of the last man and look for balls in behind or into the channels; he can hold the ball up and bring others into play. He keeps defenders guessing with quick changes of direction, and out-then-in or in-then-out runs to find space. In all, he is extremely difficult to deal with. 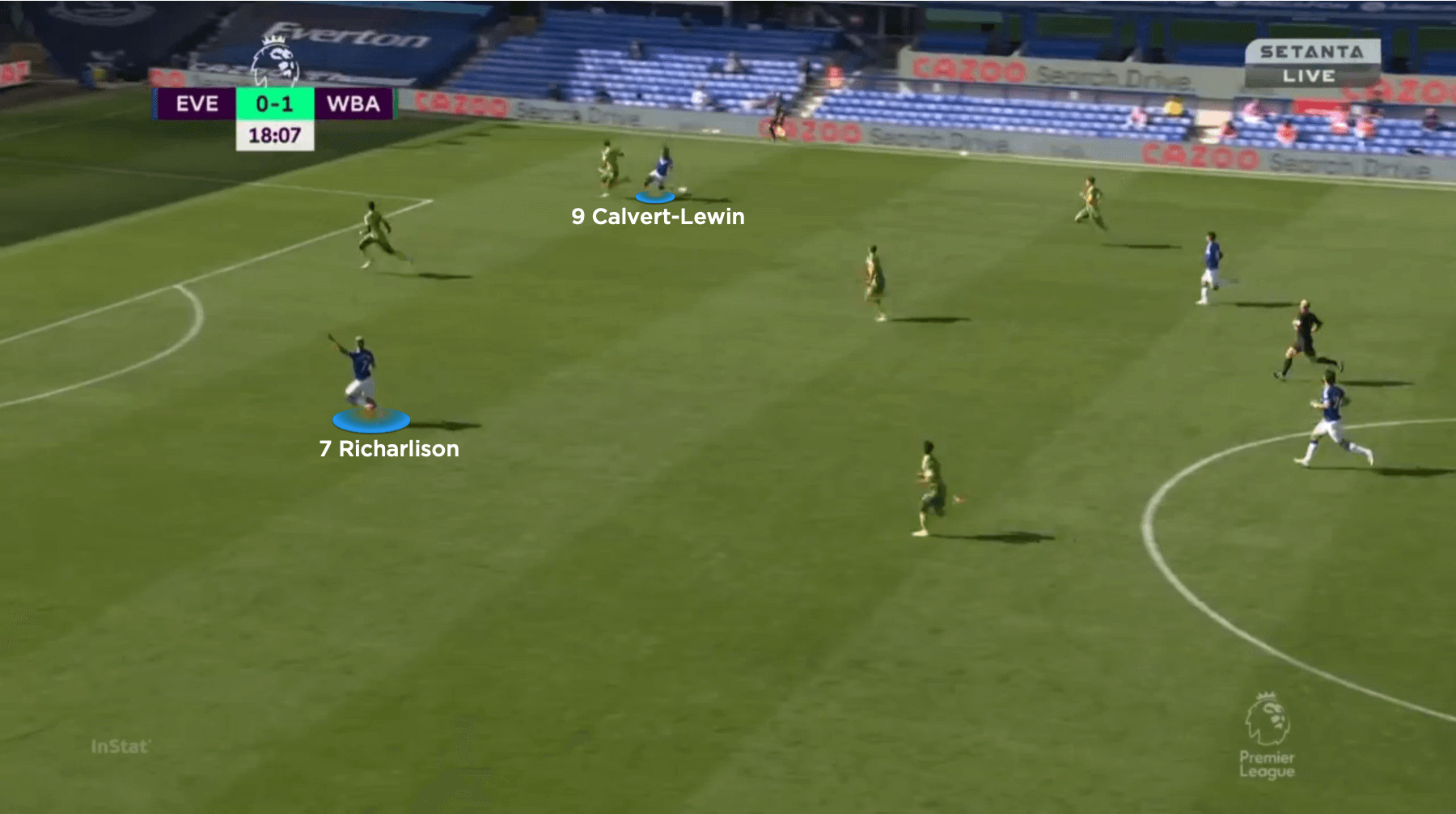 Role at Everton
Ancelotti initially paired Calvert-Lewin up front alongside Richarlison in a 4-4-2 formation, but has settled on a 4-3-3 formation in 2020/21, with Calvert-Lewin leading the line on his own. However, with new signing James Rodríguez on the right but playing a withdrawn role, Richarlison pushes high to pin back the opposing right-back, often making runs beyond Calvert-Lewin. Though not a traditional strike partnership in a formation with two centre-forwards, Everton’s two most advanced players still combine regularly and often carry attacks like a front two (above).

Calvert-Lewin performs a number of different roles for his team. One of his most important is to provide a target for goalkeeper Jordan Pickford to aim for when Ancelotti wants his team to play more direct – or simply when the option to pass out from the back isn’t there. Pickford isn’t the most comfortable playing out under pressure and he can play accurate longer balls, so it is beneficial to know he can launch the ball upfield and that Calvert-Lewin will have a good chance of winning a flick on. As he moves towards the ball, Richarlison will set off on a run in behind (below). 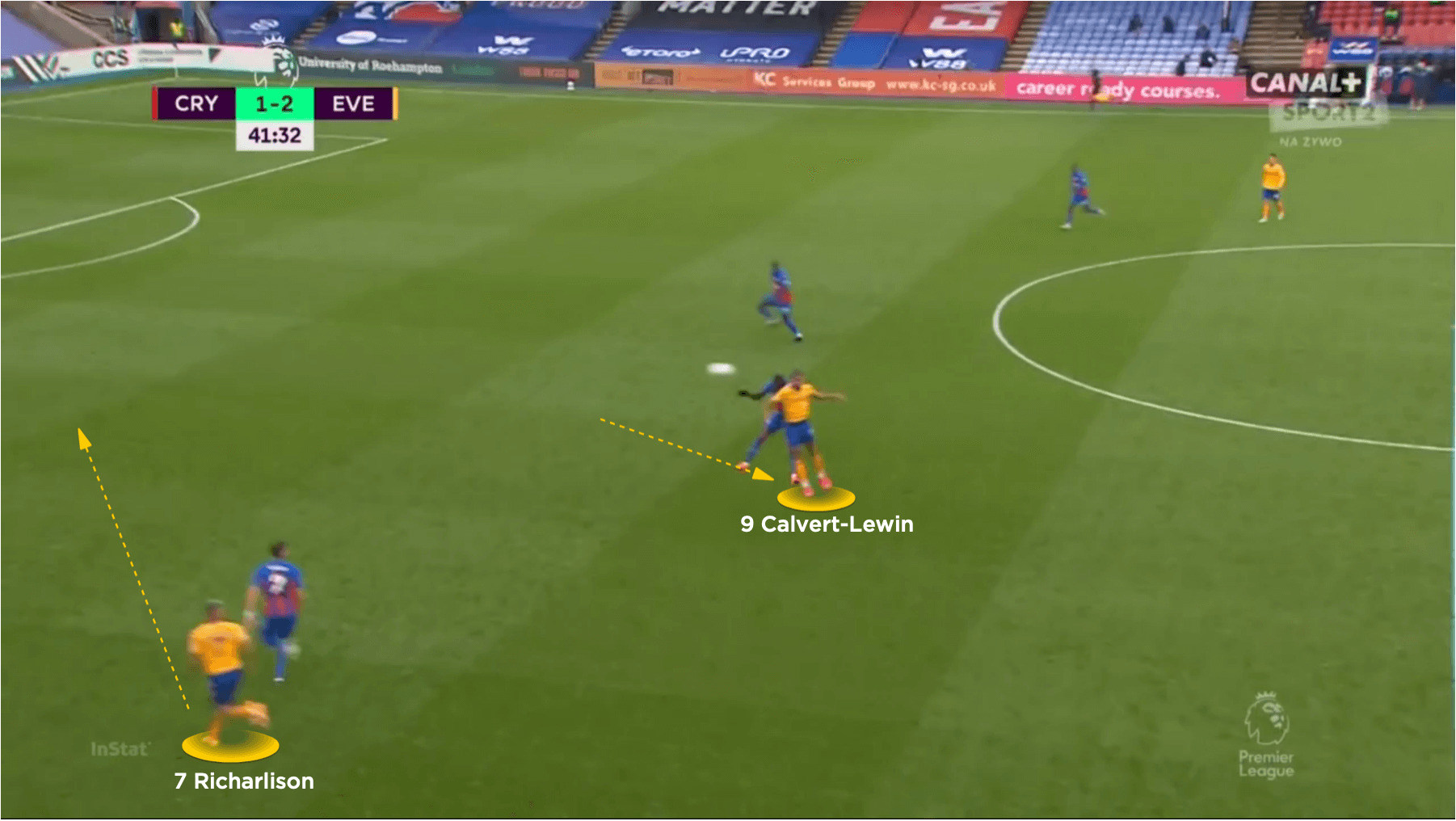 His aerial ability is also not limited to those scenarios. He is deadly close to goal – a feature that suits the fact that Everton play with plenty of width, and their aim to get down the flanks and put crosses into the penalty area. Everton had more headed attempts on goal than any other Premier League team in 2019/20 despite ranking 12th for non-headed shots, and their tally of 14 headed goals placed them second only to free-scoring champions Liverpool.

Their game has changed slightly in 2020/21, with Rodríguez certain never to run around the outside on the right wing, but full-backs Lucas Digne and Seamus Coleman have been given greater licence to get forward and into positions to get crosses into the area. In Everton’s first three games of the season, both Digne and Coleman set up goals for Calvert-Lewin with a cross.

His movement in the area has developed significantly over the past year. Gary Neville once described Robin van Persie as “like a burglar in your house – you don’t know what room he’s in”. Calvert-Lewin still has a way to go to get to the level of a prime Van Persie, but he has become much more elusive than the player of previous campaigns. He positions himself between opposing central defenders – behind the near-side defender, who cannot see him, and far enough away from the other that he has space to himself (below). However, he also varies his runs, sometimes darting across the defender in front of him, and at other times peeling off around the back. 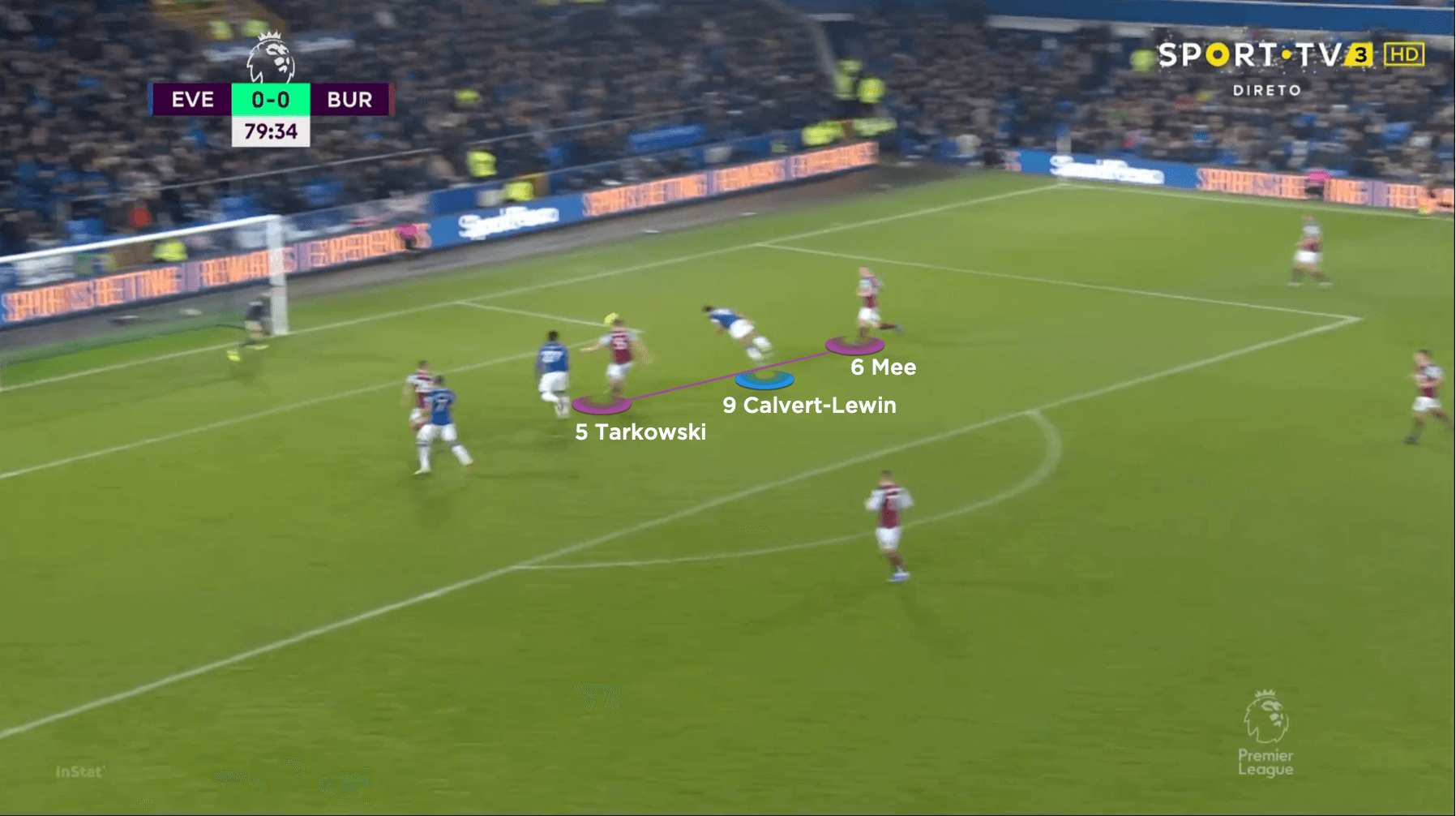 He also provides a great deal of energy in the final third, and forces defenders into mistakes by pressuring them. On several occasions in Everton colours he has profited with a goal after pouncing on an error – many of his goals against the bigger teams have come that way. In 2019/20 he scored against Manchester United, Manchester City and Chelsea after a defensive mistake, and his acrobatic strike against Arsenal came after a brief lapse in concentration from David Luiz. Calvert-Lewin is always alert to mistakes in the penalty area, where he is proving increasingly ruthless.

Indeed, he has developed into something of a penalty-box poacher, with every one of his 15 goals in all competitions in 2019/20 coming from inside the area, and all but four of them first-time strikes. Yet though he is lethal off one or two touches, when he has more work to do – or an opponent to beat – he isn’t anything like as effective. Too often, he gives defenders a chance to recover and block after shifting the ball to one side to shoot.

Calvert-Lewin is clearly working hard on adding new elements to his game. With added potency in front of goal on top of his selfless runs, effective hold-up play and a significant aerial threat, he can make a genuine claim to be one of the Premier League’s most dangerous centre-forwards. 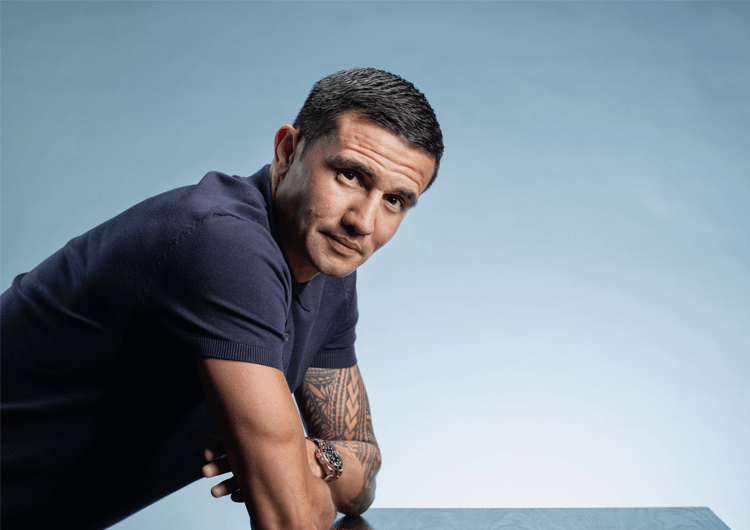 Tim Cahill became one of David Moyes’ finest signings when he moved from Millwall to Everton. The Australian revisits his time at Goodison Park 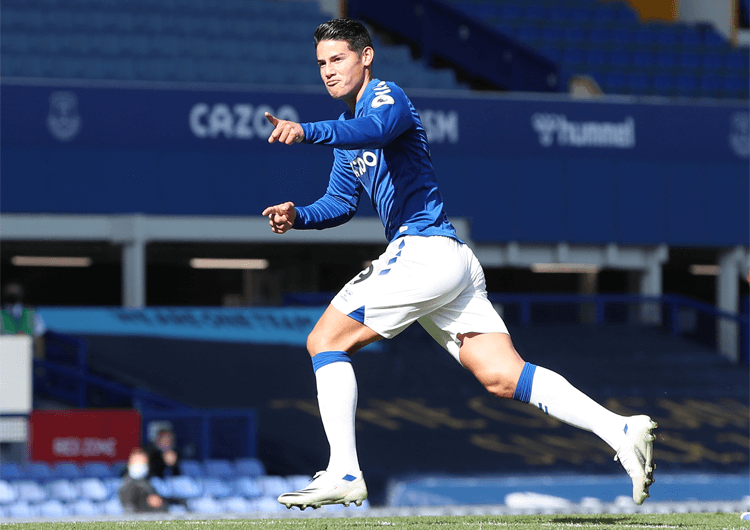 Everton bought the £20m James Rodríguez from Real Madrid in the hope that he can transform their prospects. Our professional coaches assess his talents