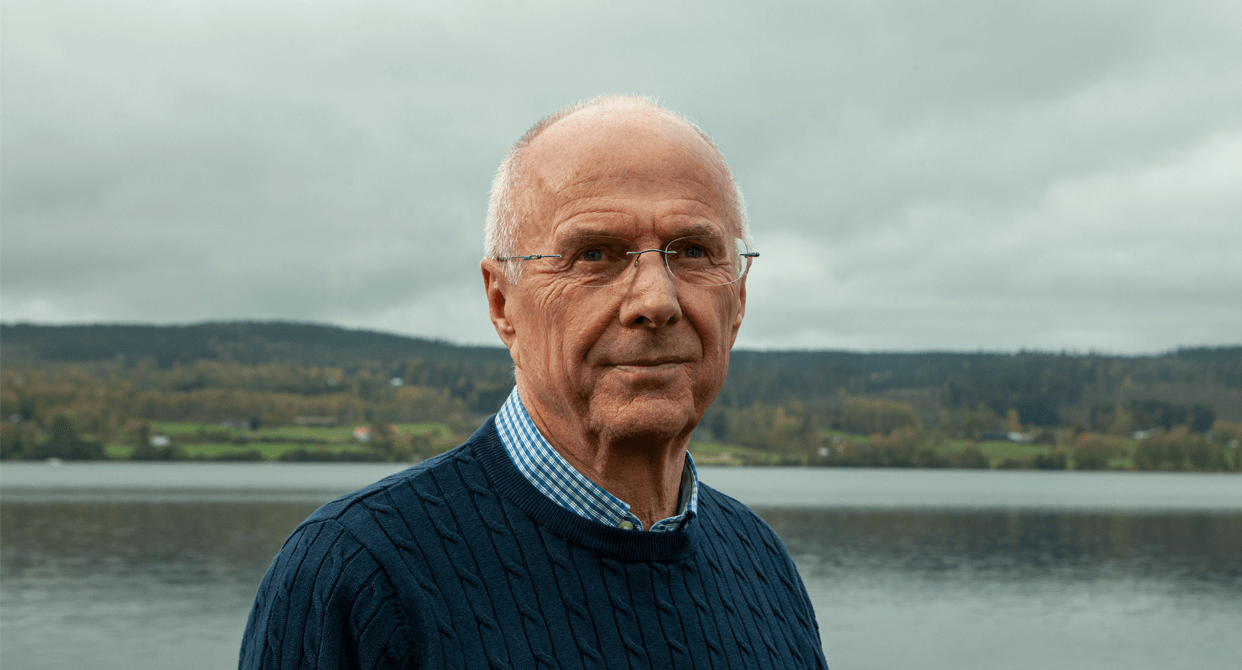 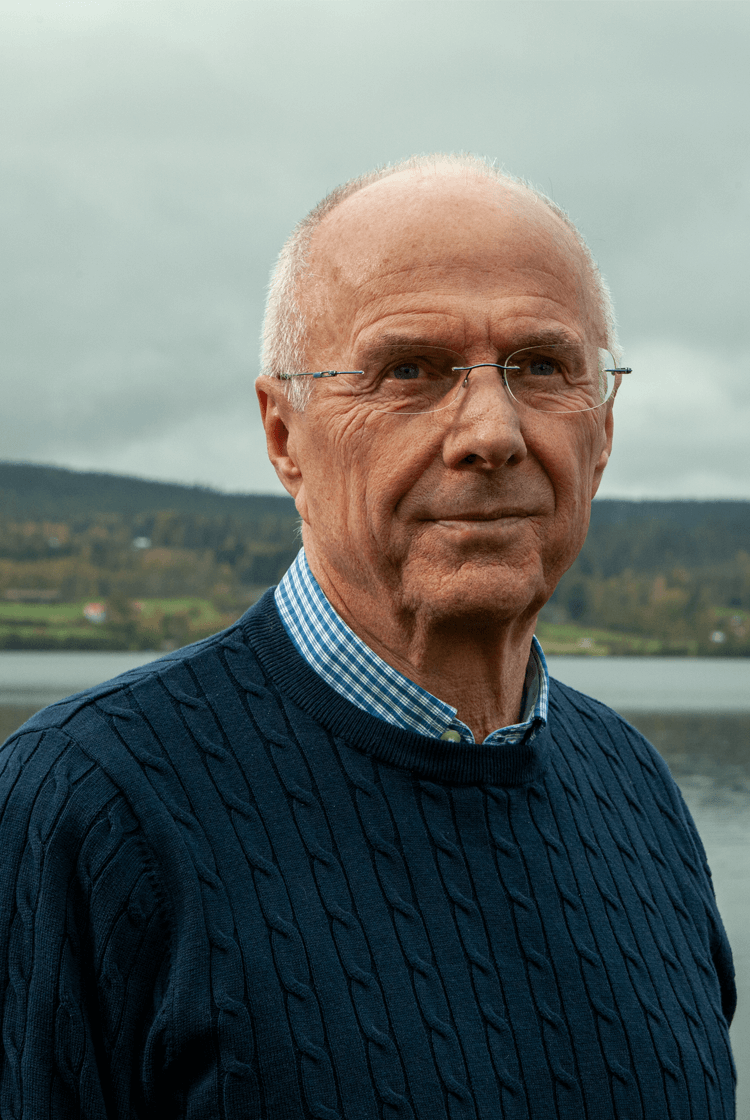 The road to England

I saw it afterwards in a film, because we didn’t really have television at that time. Pelé was 17 – he scored twice in the final against Sweden, one with a wonder goal – and had a real impact.

I had been interested in football before that. Afterwards, it became a dream to play for the Sweden national team.

Pelé became a big hero for the whole world, not just Swedish people. But there were also great players in the Sweden team – Gunnar Nordahl, Gunnar Gren and Nils Liedholm – who played in Italy, for AC Milan.

Most boys my age had the dream to be like them. They were the first Swedish players who played professionally outside of Sweden.

I always dreamed of being a professional footballer overseas, but also in the Swedish first division and for the national team. I didn’t achieve any of those dreams, though, so when I was 27 and playing in the second division, my friend – my maestro – Tord Grip (below) told me it would be better that I finish playing and become a coach.

At 27 I started as his assistant manager in the Swedish third division. It was a good decision.

English football was very important, and very popular, in Sweden. We could watch it every Saturday afternoon – for half of the population, it was the highlight of the week.

The pitches were bad, it was raining, and the ball was heavy, so there was a lot of kicking it long and fighting. That’s what Swedish people were born with.

When I was coaching, playing with a 4-4-2 instead of with a sweeper was easy to introduce because of that. It might have been new in Sweden, but in England it certainly wasn’t.

When I took over at Gothenburg in 1979 I also had a young, hungry team. Bob Houghton and Roy Hodgson (above) were already in Sweden, and they were doing very well with a 4-4-2.

I was at IFK Göteborg for three and a half years, and we did more or less the same thing in every training session. We trained hard to play that way. In the beginning, I was walking with the players: "You stand there, and you stand there."

"If you don’t win with Benfica, it’s a failure. Second is nothing"

We also bought some new players, and thought we should have a little success in Europe – but we couldn't dream about winning the UEFA Cup, as we did in 1982.

It was a big surprise. For many of the players, it was a new start in life ­– many of them became professional. For me, it became a good opportunity to leave Sweden and to become a fully professional coach.

I got the opportunity to be the manager of Benfica, and I took it. It was a big step, because I'd never been outside of Sweden, but I don't think it was the biggest. That had been moving from the third division to the first division in Sweden some years before.

When I came to Benfica I thought I would try to do the same thing as I did in Gothenburg, and it worked. I was also very lucky, because at the time they were not a club winning many trophies.

"Players like Veron and Mancini win football games for you, more or less every day. The system you choose has to suit them"

Benfica is such a big club in Portugal and in Europe, though, that I had to win. If you don't, it's a failure. Second is nothing.

The players listened to me and my ideas – about how to train, how to play, and about their mentality – which were completely new for them. “When you play away, you go there to win. You don't go there to defend and be happy with a draw.”

My first spell at Benfica was for two seasons. We won the league twice, the cup once, and in 1983 we went to the final of the UEFA Cup – which we lost over two legs to Anderlecht. The atmosphere at our stadium was fantastic, and when you played away in Europe with Benfica it was like playing at home.

I didn't understand in the beginning, but there were more Benfica supporters in Belgium and Holland – all people who had left Portugal in the past and lived there. They all came together to see Benfica.

On the back of our results at Benfica, I received offers from other clubs. Italian football was the best in the world and I spent five years there – first with Roma, and then with Fiorentina.

We talk a lot in football about formations. When I started as a coach, the system was everything – and, with Gothenburg, that was 4-4-2. If it was 1-0 to my team with five minutes to go and a striker got injured, I took him off and put in a new striker – never a midfielder.

The system was absolutely the most important thing. By the time I moved outside of Sweden and worked with big, famous players, I started to change a little.

The players are the most important thing. If you have really good football players, make the system for them – not the opposite.

"AC Milan were the best team in Europe, maybe in the world"

If you have players like Juan Sebastian Veron, like Roberto Mancini (below), pressing and being very aggressive is not their way. You can't really expect them to do that. If you stick to that system, you can't take these kinds of players.

But those two – they win football games for you, more or less every day. I learned I had to get the players I wanted, and after that to use the system that suited them.

When I went back to Benfica in 1989, things had also changed there. There were a lot of new players – good players – and we won the league once and played the final of the 1990 European Cup against AC Milan.

They were the best team in Europe – maybe in the world – at that time. They had a lot of famous players, like the three Dutchmen: Ruud Gullit, Marco van Basten and Frank Rijkaard.

"'Would you be interested in taking the England job, Sven?’"

They were incredible. They were all 190cm, 195cm, quick, had good technique, and were strong. Very good football players.

We reached the final, which was played in Austria, in Vienna. It was a poor game. Milan were not at their best, and we didn't have the strikers to break down their four defenders – Alessandro Costacurta, Franco Baresi, Paolo Maldini (below) and Mauro Tassotti.

They were extremely good at defending. Once we had conceded a goal, it was very, very difficult to come from behind against them. We were not strong enough, and we were not quick enough.

I returned to Italy again in 1992, to manage Sampdoria – where I stayed for five years until joining Lazio in 1997. I was still with Lazio in 2000, and on a short holiday, when I got a phone call from my agent Athole Still. He was at the old Wembley.

“I’m at Wembley. I just saw England lose a 2002 World Cup qualifier to Germany. Would you be interested in taking the England job?”

Kevin Keegan (above) had just resigned. Athole was with The Football Association's Adam Crozier and David Dein.

I said: “Are you joking, Athole? You know that that’s not possible at all.”

“Well, you can always try,” he said. One or two days later, Adam Crozier phoned me and asked: “Are you interested in taking that job?”

Even if I was at Lazio, England is the biggest job you can have. It’s probably the best, and most famous, job in football.

After that, Adam, David Dein and Athole Still came to Rome to negotiate.

And then, well, it became what it became.