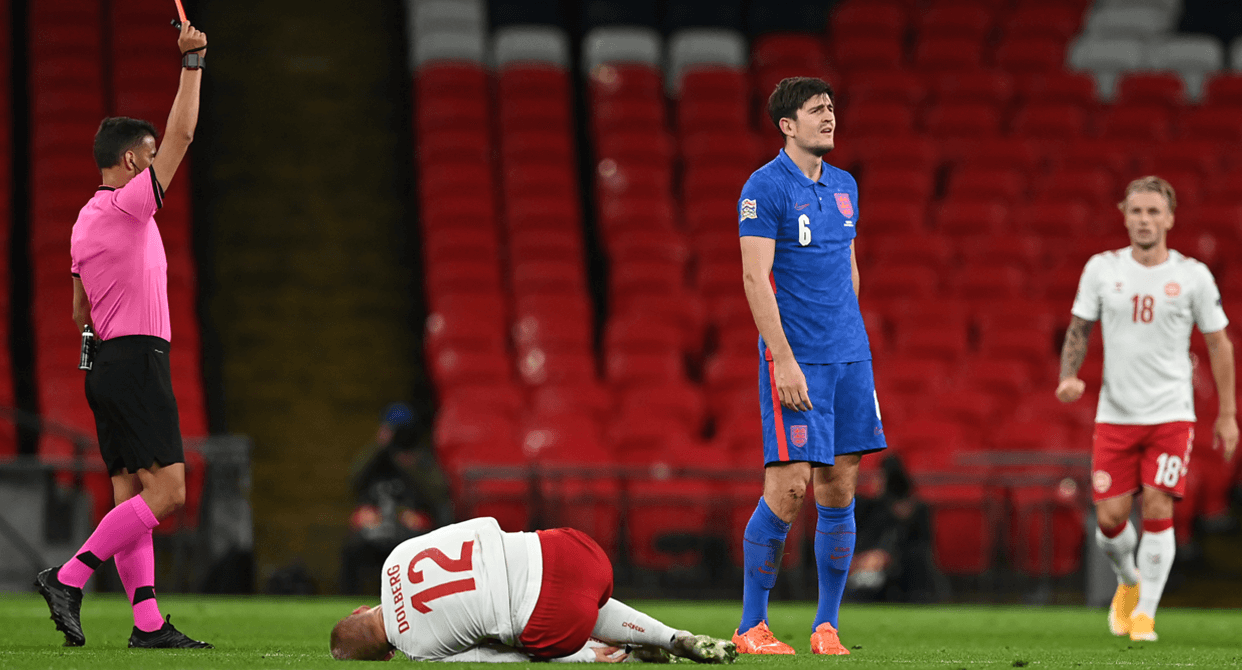 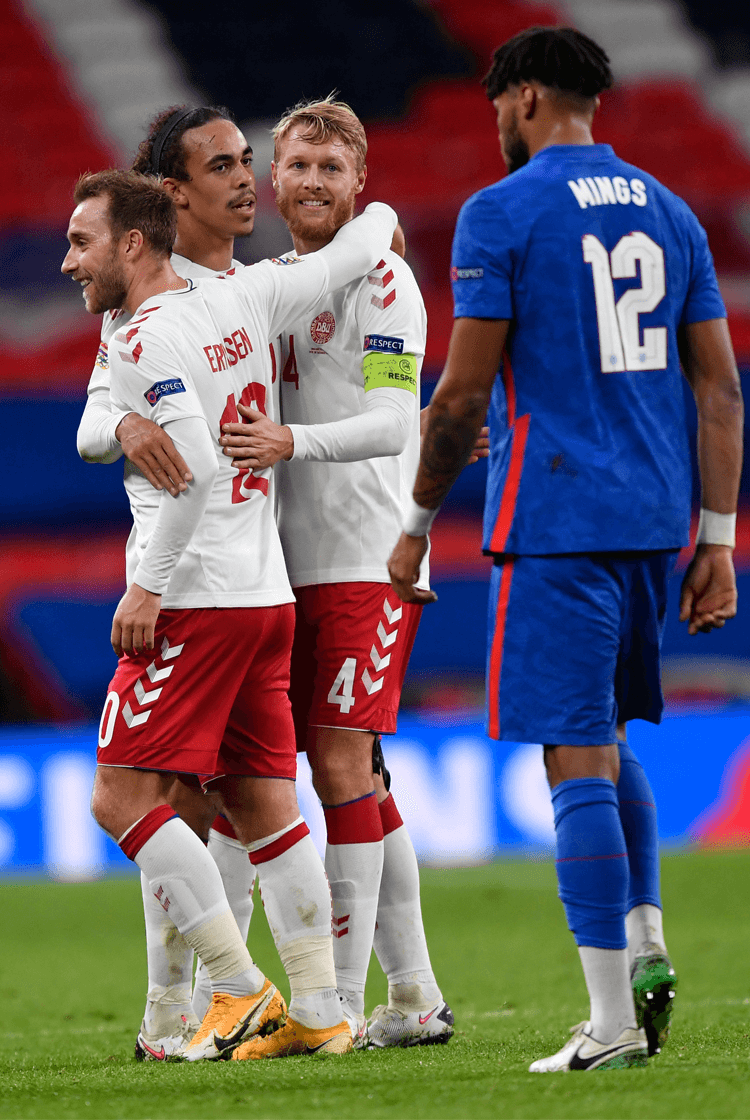 England suffered the disappointment of Harry Maguire and Reece James being sent off as they lost to Denmark in the Nations League at Wembley. The Manchester United defender was dismissed in the 31st minute after struggling when fouling Yussef Poulsen and then Kasper Dolberg, and James followed after the final whistle for confronting Spanish referee Jesus Gil Manzano. When Christian Eriksen scored from the penalty spot – recording his 34th goal on his 100th international appearance – after Kyle Walker's challenge on Thomas Delaney, England were left third in Group A2. "I was very proud of the performance," said England's manager Gareth Southgate. "We were excellent with 11 men and causing them all sorts of problems down our right-hand side. The sending off alters everything and the penalty – it's a foul on Kyle Walker and I don't see the foul at all. The less said the better. We showed resilience and showed a great example of how to play with 10 pragmatically, and when to press." 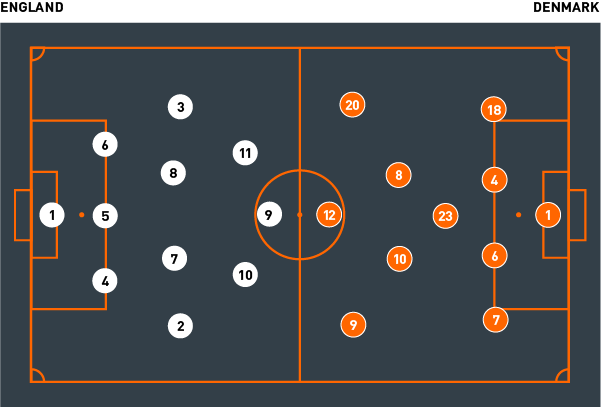 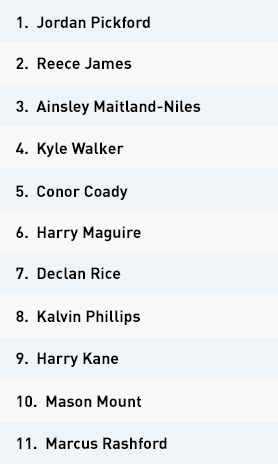 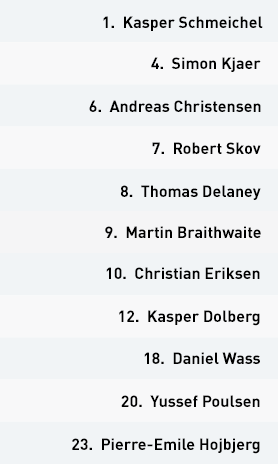 England were organised by their manager Gareth Southgate into a 3-4-3 formation led by the front three of Mason Mount, Harry Kane and Marcus Rashford. They encountered opponents who, though willing to adopt different shapes, most regularly defended with a 4-4-2, through Christian Eriksen advancing to alongside Kasper Dolberg.

Southgate's team began with a promising spell of possession, and was confronted with an organised and compact block. They advanced beyond Denmark's front two via either Kyle Walker or Harry Maguire carrying possession out of defence to commit an opponent and therefore create an overload, and doing so succeeded towards both the left and right, even if it was towards the right, where Mount and Reece James also participated, that proved more common. England continued to favour playing towards the right as the first half progressed; Denmark's Robert Skov appeared vulnerable to movements on his blindside, so James and Mount targeted the spaces that existed behind him.

If Denmark instead used a 4-2-3-1, the additional number they had in midfield meant Pierre-Emile Hojbjerg withdrawing into defence to cover Skov when he moved to press and Denmark's central defenders Simon Kjaer and Andreas Christensen holding their positions, and therefore defending against the crosses England attempted. Those crosses struggled to reach their desired target, and as a consequence quality goalscoring chances eluded England.

Maguire's red card meant England then reorganising to attack with a 4-4-1 or 4-2-3. Their priority was to remain compact and organised, and to rely on the speed they had in wider positions to counter. They also attempted an increased number of direct balls to Kane, who then sought to hold the ball and bring others into play – Rashford and Mount responded by making forward runs – but unless Declan Rice and Kalvin Phillips supported those attacks there were too often too few numbers to unsettle Denmark. Denmark also regularly fouled Kane; the set-pieces those fouls led to were perhaps when England had their greatest potential.

England attempted a total of 73 long balls – compared to 49 in their recent victory over Belgium – and, like against Belgium, had some success in pursuing second balls. They regardless struggled to threaten, beyond a 65th-minute free-kick from which Kasper Schmeichel produced a fine save

Kasper Hjulmand set Denmark up in a 4-3-3 formation in which Thomas Delaney, Christian Eriksen and Pierre-Emile Hojbjerg formed their midfield three. Their hosts, England, defended with a 5-2-3 in which Kalvin Phillips and Declan Rice were in central midfield.

Denmark sought to build from the back, and encountered Mason Mount and Marcus Rashford pressing the outside shoulder of central defenders Andreas Christensen and Simon Kjaer, and Harry Kane withdrawing into a deeper role to screen Hojbjerg to negate the three-on-two that otherwise would have existed in midfield. They were relatively fluid in possession; Hojbjerg, Thomas Delaney and Christian Eriksen adopted deeper positions and Yussef Poulsen and Martin Braithwaite moved infield to encourage Daniel Wass and Robert Skov to advance from full-back; their rotations provided security, overloads in central positions, and a way of maintaining their width.

The visitors also sought to create passing lanes from their central defenders and into the half-spaces, which were followed by passes outside to the relevant advancing full-back. A further common move unfolded in the next phase of their attempted attacks, and involved two players making contrasting movements to create space; their attacking approach remained consistent after Kasper Dolberg's injury.


When Harry Maguire's dismissal reduced England to 10 men they instead defended with a 4-4-1 or 4-2-3, and defended from deeper territory, waiting on specific triggers before pressing and working to recover the ball and counter. A vertical pass into central midfield that was then returned to defence was one trigger; a diagonal pass into a wider area that was followed by a backwards pass was another, and a slow pass in any direction was the third.

England were reliant on the speed of their attackers during moments of transition, but Denmark also offered potential during transitions. Errors committed by England contributed to that, but poor decision making and execution in the final third prevented them from extending their lead.