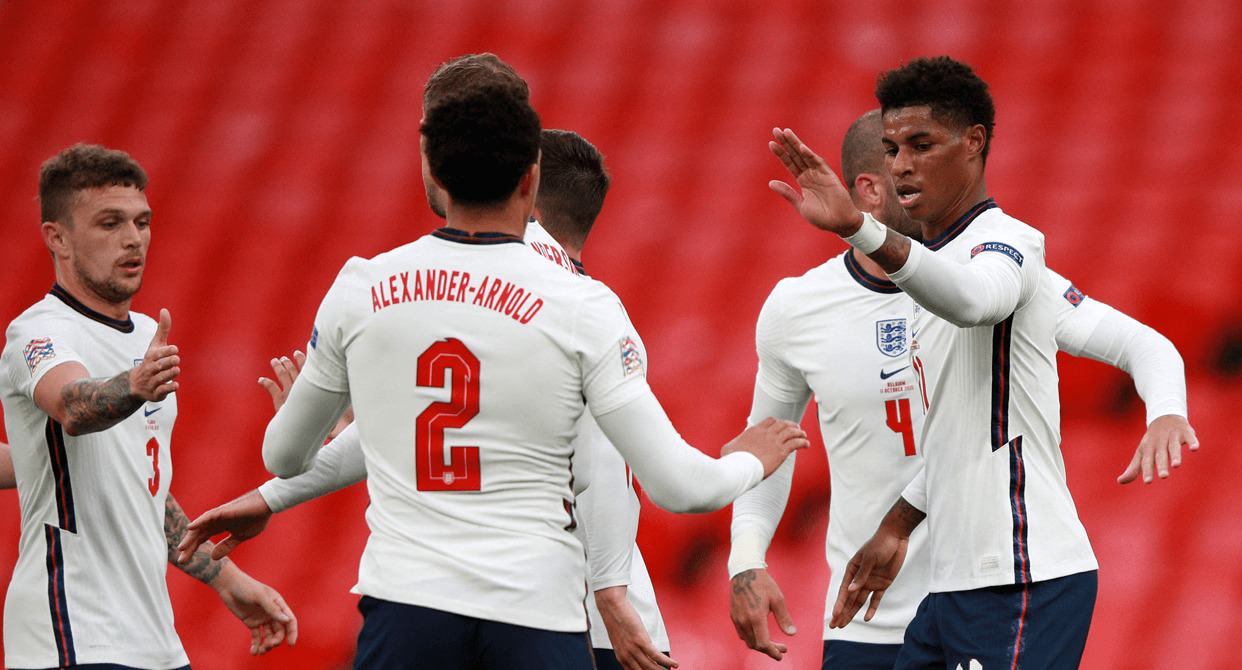 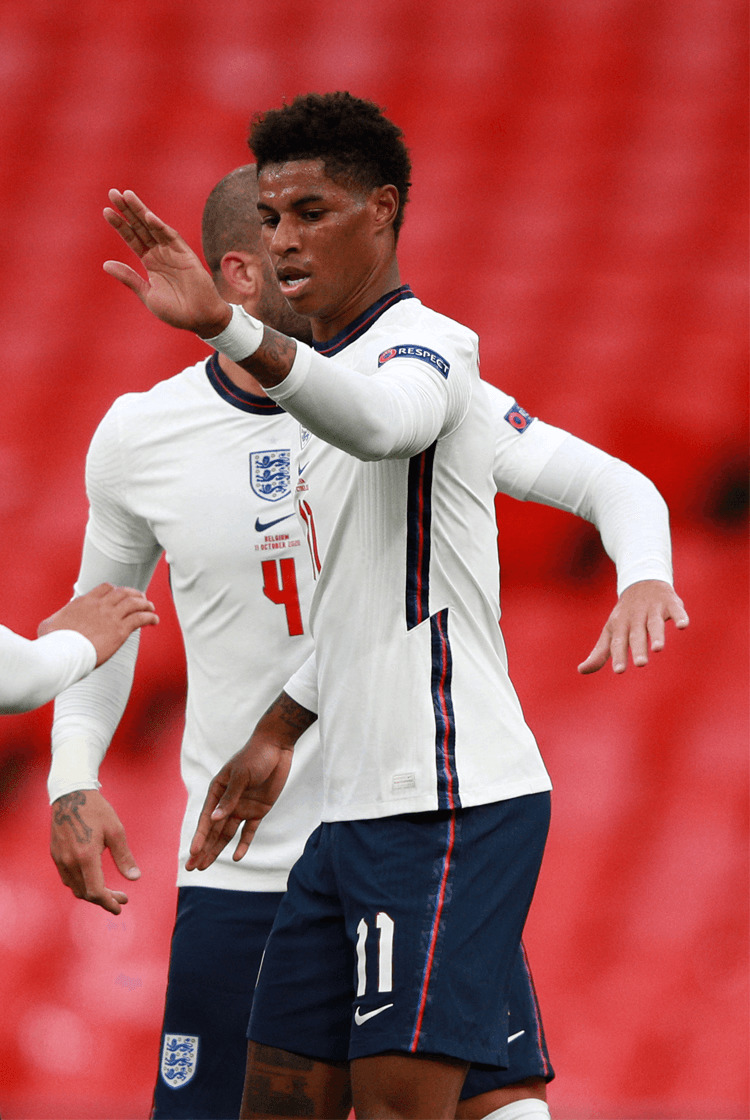 England recovered from a goal down to beat the world's highest ranked team at Wembley. After Romelu Lukaku gave Belgium the lead from the penalty spot when he was brought down by Eric Dier, Gareth Southgate's team were awarded a penalty of their own towards the end of the first half when Jordan Henderson went down under a challenge from Thomas Meunier. Marcus Rashford then did as his former Manchester United teammate had done by converting, and England thereafter grew in confidence. In the 64th minute, Mason Mount's shot took a deflection off Toby Alderweireld to loop beyond Simon Mignolet, handing England a lead that they would not surrender, and ultimately inflicting Belgium's first defeat since November 2018. "It was a top-level game," Southgate said. "We had a lot of young players there for whom that was a really great experience. You have to suffer to win these big games and the players did that." Belgium manager Roberto Martínez said: "We played very well in the first half. The penalty was a massive blow, and the second half was very level, but the deflected goal was the difference. Our performance should have been better – we couldn't match our level of the first half." 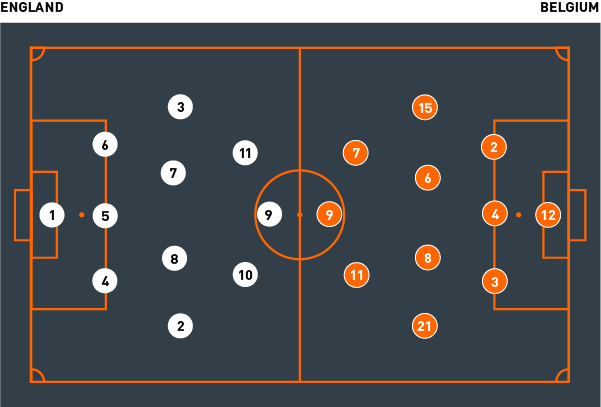 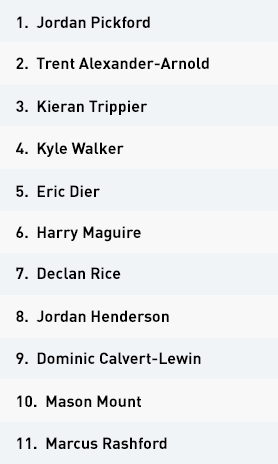 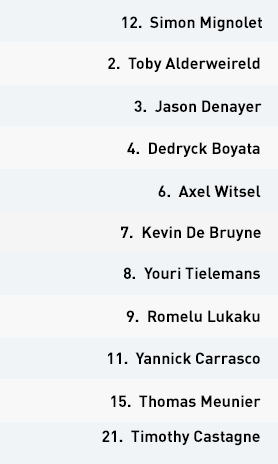 England were again organised by Gareth Southgate into their new-look 3-4-3 formation, that on this occasion featured Trent Alexander-Arnold, Jordan Henderson, Declan Rice and Kieran Tripper across midfield, and therefore Trippier again out of position on the left. Their opponents, Belgium, defended with a 5-2-3.

Belgium alternated between applying a high press and using a mid-block, and their shape meant they largely defended man-for-man against England, who sought to build possession patiently. England circulated possession between their three central defenders, but struggled to play it forwards; when they did so it would quickly be returned to those in defence because of the press being applied from behind.

England therefore often sought to play longer passes from deeper positions into the runs of Marcus Rashford and Dominic Calvert-Lewin, which Belgium largely defended well against by shepherding play into the channels and away from goal, and winning the first contact on the passes that didn't go in behind. England were then adept at collecting the second balls, and capable of continuing to attack from a more advanced position and beyond the first two lines of Belgium's structure. It was by winning the second ball that England eventually created their winning goal.

They also attempted to play into the feet of Calvert-Lewin, who would withdraw to towards the ball – triggering runs from Rashford and Mason Mount – and either set it back to the midfielders behind them or turn and advance with it. England were willing to build in wide areas, and Belgium encouraged them to do so; towards the left Rashford was likelier to run at Belgium's defenders while from the right, Alexander-Arnold was likelier to attempt a cross or a ball into the channel. Belgium comfortably defended against any that were attempted.

Southgate's team offered limited movement into the final third. Their runs only came behind Belgium's defence, and with little variety, so they didn't take advantage of occasions when they could have combined, via short passes, around that defence.

Roberto Martínez set Belgium up in a 3-4-3 formation, led by the front three of Yannick Carrasco, Kevin De Bruyne and Romelu Lukaku. Their hosts, England, defended with a 5-2-3, through Trent Alexander-Arnold and Kieran Trippier withdrawing from midfield and into defence.

They had the greater share of possession, and attempted to draw England into pressing them and then taking advantage of the spaces that would be vacated. England defended with a mid-block, and the same approach they recently used against Wales – encouraging play into wider areas and forming a box around the opposing central midfielders to make it difficult to progress in central areas.


Belgium used combinations in wider areas – often wall passes – to progress beyond England's front three, and contrasting movements between a wing-back and wide forward to threaten the spaces behind England's structure and to occupy England's wing-backs. When diagonal passes were played to the feet of Belgium's wing-backs, England's central midfielders would retreat, creating space for diagonal passes inside to Belgium's midfield, and beyond the hosts' front three.

Like England, Belgium also struggled to register any shots on target. Their possession mattered little when it was combined with poor decision making in the final third.