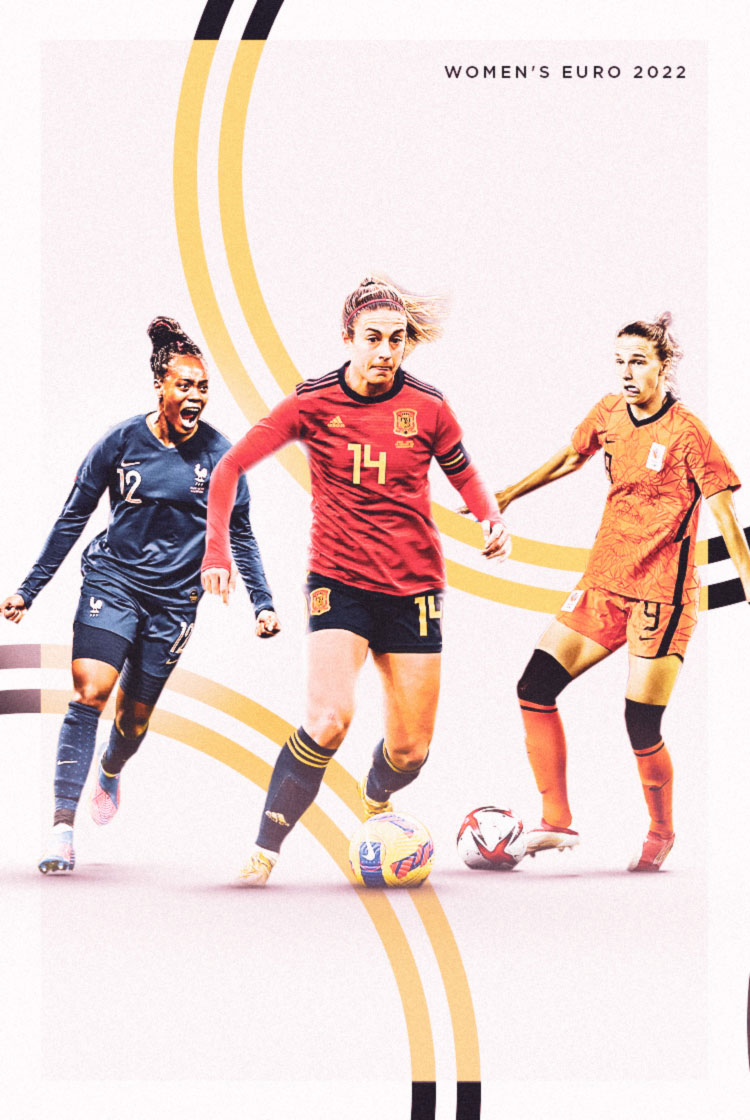 Women's football takes centre stage this summer. The 13th staging of the UEFA Women's Euros kicks off on the evening of Wednesday July 6, when Sarina Wiegman's England face Austria at Old Trafford. Hopes are high that the hosts can become champions for the first time, but there are plenty of other teams – serial winners Germany, defending champions the Netherlands and the rising stars of Spain among them – that will fancy their chances of making the final, at Wembley, on July 31.

There can be only one winning team, of course, but the tournament also gives individuals the chance to shine on a global stage. With that in mind, we have selected 10 players we think could light up the Euros, starting in Group A with a young English attacker with a huge career ahead of her.

At 21, however, Lauren Hemp is very much one for the present. The Manchester City attacker made her senior England debut in October 2019, and scored her first four international goals in a thrashing of Latvia in November 2021. She combines express pace with ability on the ball, excelling in attacking duels while offering no little contribution – through both goals and assists – in the final third. She is stronger on her left foot, so is more comfortable going on the outside or combining if starting on the left; on the right, she can cut inside and get shots off on her stronger side. Ten goals and six assists in the most recent WSL season represent an excellent return for a young player heading into the Euros high on confidence. Given the opportunity, she can light up the tournament.

Forward, Norway and Lyon
The Norwegian superstar is back on the international stage this year, having returned from a self-imposed five-year exile in protest at how she felt the women’s game was treated by the Norwegian Football Federation. The 2018 Ballon d’Or winner is still only 26 – she turns 27 the day before Norway face England in both sides’ second group-stage game – and she wasted no time in making her mark upon her return to the national side, with a hat-trick against Kosovo in a World Cup qualifier in April.

Hegerberg is a brilliant centre-forward who plays almost exclusively through the middle, although she can rotate out to either the left or right flanks when needed. An excellent finisher off both feet and with her head, she offers deceptive movement in the box while timing her runs superbly to meet crosses into the area. She usually operates as the lone number nine in a 4-3-3 shape for her club Lyon, but for Norway expect to see her play alongside Barcelona forward Caroline Hansen in a 4-4-2. Chelsea’s Guro Reiten and Elisabeth Terland of SK Brann Kvinner are two players to keep an eye out for in midfield, too.

Midfielder, Northern Ireland and Liverpool
Northern Ireland’s record goalscorer has won more than 80 caps across an international career that started all the way back in 2005. Now 33, she nevertheless comes into the Euros on the back of one of the best years of her career, scoring 11 goals and making nine in all competitions. Furness operates mostly as a central midfielder, but Northern Ireland use varying formations and she is versatile enough to move around within that. Head coach Kenny Shiels started her as a more attacking number eight in a 4-3-3 against Austria back in April; four days later, Furness was selected as the single pivot in a 3-5-2 shape in a 5-0 defeat by England.

As well as her obvious eye for goal from midfield, Furness is an excellent passer in possession and, out of it, a tough opponent who excels in defensive duels. Her team are inevitably outsiders at their very first Euros, but the Liverpool midfielder will have a huge role to play for them in both directions.

Goalkeeper, Austria and Arsenal
Zinsberger is a talented goalkeeper who gained her first international cap at the tender age of 17. She will know more than most of her Austrian teammates about England when the two teams face off in the tournament’s opening game at Old Trafford, being that she has played for Arsenal since 2019. She heads for the Euros on the back of an excellent season, having won the WSL Golden Glove for 2021/22 with 13 clean sheets – three more than anyone else.

The 26-year-old is an excellent shot-stopper who can get down low and fast from close range, while she has the athletic profile to come for crosses across her area. As with so many modern goalkeepers, she is comfortable in possession and capable of supporting her teammates in build-up play. Further forward, the Austrians will look to midfielder Sarah Zadrazil and forward Nicole Billa to give their Group A opponents something to think about – but if they are to progress from a group featuring hosts England and Norway, Zinsberger might have to be at her best between the sticks.

Attacking midfielder/Forward, Denmark and Chelsea
Denmark’s all-time top scorer became the most expensive women’s footballer in history when she left Wolfsburg for Emma Hayes and Chelsea in 2020, for a reported fee of around £250,000. The 29-year-old is an energetic and intelligent attacker who has had an excellent season, scoring 17 and assisting seven in all competitions.

Denmark play with real tactical flexibility – they have set up in 3-4-3, 3-5-2 and 4-3-3 formations in recent times – but Harder is a versatile and hard-working player who can prove effective no matter how the team plays. She is particularly strong when running in behind defensive lines to stretch play, while her intelligent movement also makes her a threat at attacking set-pieces. She is a combative tackler who comes alive when her team wins the ball high, making her dangerous in the counter-attacking phase. The 2017 runners-up face both Spain and Germany in a very tough Group B, so this could be crucial to their chances of progressing.

Forward, Germany and Bayern Munich
There have been 12 stagings of the Women’s Euros, and Germany have won eight of them. A run of six straight titles ended in 2017, however, with a quarter-final defeat to Denmark. The Germans will be desperate to right that wrong this summer, and the Bayern Munich player of the season is one of the key figures in a team that has every chance of returning to winning ways.

A versatile striker who can play through the middle or out wide, Schüller scored 34 goals in all competitions in a stellar 2021/22 campaign. The 24-year-old is direct and physical in her play, and composed in front of goal, but the quality of her passing is such that she can create as well as finish – this makes her a significant threat anywhere in the attacking half.

Head coach Martina Voss-Tecklenburg mostly uses a 4-3-3 or 4-2-3-1 shape, but she is confident in her squad’s ability to adapt to tactical or system changes within games. In Schüller, Bayern teammate Giulia Gwinn, Wolfsburg midfielder Svenja Huth and veteran captain Alexandra Popp to name just a few, she certainly has the players to deliver whatever plan she sets out.

Forward, Netherlands and Arsenal
The defending champions might no longer have the coach who led them to Euros glory in 2017 – Sarina Wiegman now manages England, of course – but they do return with three of the tournament’s four top goalscorers from five years ago. And, in Vivianne Miedema, they boast a prolific striker who will be desperate to take home the Golden Boot having missed out to England’s Jodie Taylor in 2017.

Miedema is no veteran – she turns 26 during the tournament – but her numbers are staggering. The all-time top goalscorer in the English WSL has netted more than 90 international goals at a rate of almost one per match, including two in the 2017 Euros final against Denmark and 10 in only four games at last summer’s Olympic Games. Perhaps not surprisingly, the 2021 BBC Women’s Footballer of the Year is confident finishing with both feet, and from inside or outside the box. Her clever movement enables her to work off the blindside of defenders and burst into pockets of space to receive in behind.

In the Netherlands’ most recent fixtures, head coach Mark Parsons – an Englishman who spent eight years coaching in the United States – has played with a 4-2-3-1 system in which Miedema plays as the single forward. With the creative potential in and around her – keep an eye out for the likes of Jill Roord and Daniëlle van de Donk – there is every reason to believe she will have yet another fruitful few weeks.

Defender, Sweden and Chelsea
The current Chelsea Women captain is one of the best defenders in the world who, in the 2020/21 season, was named in both the PFA Women’s Team of the Year and the FIFA FIFPro Women’s World XI. Comfortable both at left-back or as a left-sided centre-back, the 28-year-old is a fierce competitor and strong header who excels in 1v1 duels either on the ground or in the air. On the ball, she is a competent long passer who also offers no little threat in the opposition box.

Head coach Peter Gerhardsson has experimented with a 3-5-2 formation in Sweden’s last two internationals, against Ireland and Georgia in April, having mostly used a 4-3-3 since taking over after the last Euros. In both, Eriksson started as the left-sided of the three centre-backs. It will be interesting to see how the team lines up in England, but this is a team that can challenge – Fridolina Rolfö and Arsenal’s Stina Blackstenius are two attackers to note – for silverware this summer.

France have never been past the quarter finals of the Women’s Euros, and they head into the 2022 version missing a number of key players. But in Marie-Antoinette Katoto, they have a young forward who could light up the tournament. The Paris Saint-Germain attacker has had a season of seasons, scoring 48 goals in all competitions to alert the likes of Lyon and Barcelona – and, at 23, she has her peak years very much ahead of her.

Katoto has the ability to run in behind defenders, but is equally comfortable dropping short to receive in space and combine with her teammates. On the ball, she glides forward at a pace that causes defenders all sorts of problems, and is inevitably excellent attacking 1v1. She is dangerous in the box, combining good finishing from crosses with a poacher’s instinct that helps explain how prolific she has become. She is also a threat when receiving with her back to goal, where she can use her strength to pin and turn defenders before playing in teammates or getting a shot off herself.

Head coach Corinne Diacre is likely to field her preferred 4-3-3 formation, with inspirational captain Wendie Renard as one of the two starting centre-backs. But it is Katoto, playing as the central striker, who could prove the real star of the show.

This article originally included Spain and Barcelona star Alexia Putellas as one of our 10 to watch, but she had to withdraw with an ACL injury on the eve of the tournament.