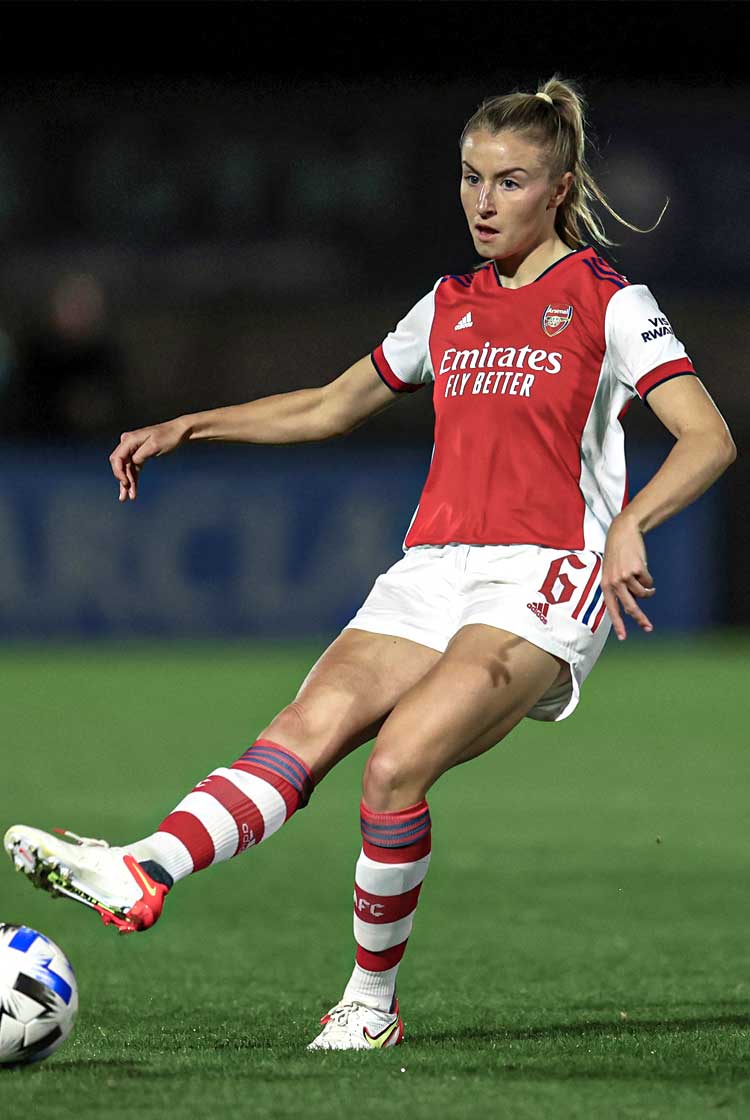 Profile
By her early 20s, Leah Williamson had established herself as one of the first names on the teamsheet both for England and for her childhood club Arsenal, and she has only gone on to improve while playing regularly at the top. An exceptional footballer and a leader both on and off the pitch, Williamson was described as "a star" by former England manager Phil Neville, and was named England captain for a World Cup qualifier against North Macedonia in September 2021. She is already one of the best players in the Women's Super League, but there is every reason to believe she can keep on getting better.

The new Arsenal contract she signed in January 2021 will guarantee that she has the chance to continue to improve at a top club for years to come. Williamson loves Arsenal, and playing in a positive environment at a club she has no intention of leaving will only aid her development.

Tactical Analysis
Williamson plays in the right centre-back position for both Arsenal and England. She commands the defence and directs teammates when out of possession, and dominates the game when in possession. She therefore provides defensive stability in both of those phases of the game.

When out of possession, Williamson recognises triggers and cues in the opposition’s attacking play, showing good awareness of when to move forward to engage, regularly winning the ball as it arrives with her opponent. She excels when approaching her direct opponent on their blind side, and after regaining possession, she distributes quickly, directly and accurately to effectively transition her team to attack.

One of her greatest strengths is the variety in her passing range, and her team’s moves will often start with her. She is able to play around, through and beyond the opposition, meaning she always has a range of passing options when she is on the ball. Able to make good decisions for the team quickly, Williamson is patient in possession, happy to hold on to the ball when unable to find a clear and open forward passing line. She is calm on the ball and can recycle possession across the back line (below), but she regularly looks to break lines with her passing. Diagonal passes are a key strength, as she is able to connect play with the left-sided winger or midfielder before her opponents have had the chance to move across. Williamson’s passing range is such that she has also played as a defensive midfielder, and even when she plays in defence, she acts like a quarterback for her team.

If her opponents are playing a high defensive line, she has the ability to play beyond that defensive line for her attacking teammates to run on to. This strategy has led to her picking up several assists while playing for Arsenal and England, and is best used when she plays just in front of the defensive unit, or when she steps out of defence into midfield.

Part of what makes Williamson’s in-possession ability so effective is the positive starting positions she takes up, as she looks to receive the ball while on her back foot and in a wide position. This way, she can see the ball, her opponents and her teammates simultaneously. By receiving the ball on her back foot – her left when receiving from the right full-back, or her right when receiving from the left full–back or left centre-back – Williamson gives herself as much time as possible on the ball.

Williamson is tenacious when it comes to regaining the ball. When in one-on-one situations, Williamson adopts a low and side-on body position, forcing her opponent to play towards her stronger side. If she finds herself defending a through ball, Williamson uses her body as a barrier between her opponent and the ball, opening her hips so her feet do not cross as she runs, and rarely leaving herself in a position where she has to go to ground. She moves her body across the advancing player (below) to regain possession without having to commit to a tackle.

When facing a counter-attack or a situation where her team is underloaded, Williamson is disciplined with her defensive positioning, and is adept at delaying the forward movement of opponents. This defensive discipline allows her teammates to retreat into position and reorganise behind the ball. Williamson will defend the central channels of the pitch and only look to regain the ball in wide areas if her team is out of shape and the full-backs have advanced. If caught out of position – perhaps from an attacking set-piece situation – Williamson will put considerable energy into her recovery run.

If forced into making a tackle, Williamson looks for a trigger from her opponent before committing. If an opponent takes a touch out of their feet, Williamson steps in to use her body as a barrier and pushes the ball away from danger. She will look to regain possession with a sliding tackle when she recognises that her team are exposed at the back and there is no chance to delay her opponent.

An unlikely threat in the final third of the pitch, Williamson has scored several goals at attacking set-pieces. She is particularly effective when timing a run across the penalty area to meet a corner at the near post, and when waiting around the edge of the penalty area to pick up on the second or third phase of play from the set-piece.

Williamson’s performances at both club and international level have been, on the whole, impeccable. One weakness is that she can sometimes overplay or allow her opponent to get too close to her when she has the ball. In these situations, she sometimes commits a foul when having been caught in possession.

Role at Arsenal
A graduate of the academy system at Arsenal, Williamson plays at right centre-back. The team change their in-possession shape depending on the opposition, but will often be found in a 4-2-3-1 or 4-3-3 formation. Williamson is often paired at centre-back Lotte Wubben-Moy or Jen Beattie, and is often flanked by right full-back Noelle Maritz (above).

When Arsenal build from the back, full-backs Maritz and Steph Catley move into advanced positions, stretching the pitch and creating space at the back. Williamson is trusted to receive the ball from the goalkeeper and bring the ball out of defence. This gives Williamson the stage to put her impressive passing range to good use, and she moves the ball forward to create attacking opportunities.

Williamson has the freedom to move forward with the ball when in possession. Teammates make movements to create space for her to move into, and when travelling into midfield, a teammate such as Kim Little and Lisa Wälti will drop in to cover for her (below).

If Arsenal’s opponents do not press the ball and play in a mid-block, protecting the central areas of the pitch, Williamson will often look to play beyond the opposition’s defensive line, and has been known to create attacking opportunities from relatively little. If Arsenal’s opponents use a low block, Williamson will travel into the midfield area at the first opportunity and play vertical passes into more attack-minded players.

Williamson is a tactically aware and technical centre-back, confident with the ball at her feet and able to connect with forward players with direct and accurate passing. Confident to travel forward with the ball into central areas, Williamson is something of a playmaker from centre-back, much like Leonardo Bonucci is for Juventus and Italy. She is a leader both in and out of possession, and as she continues to develop, she is becoming an even more important player for both club and country.