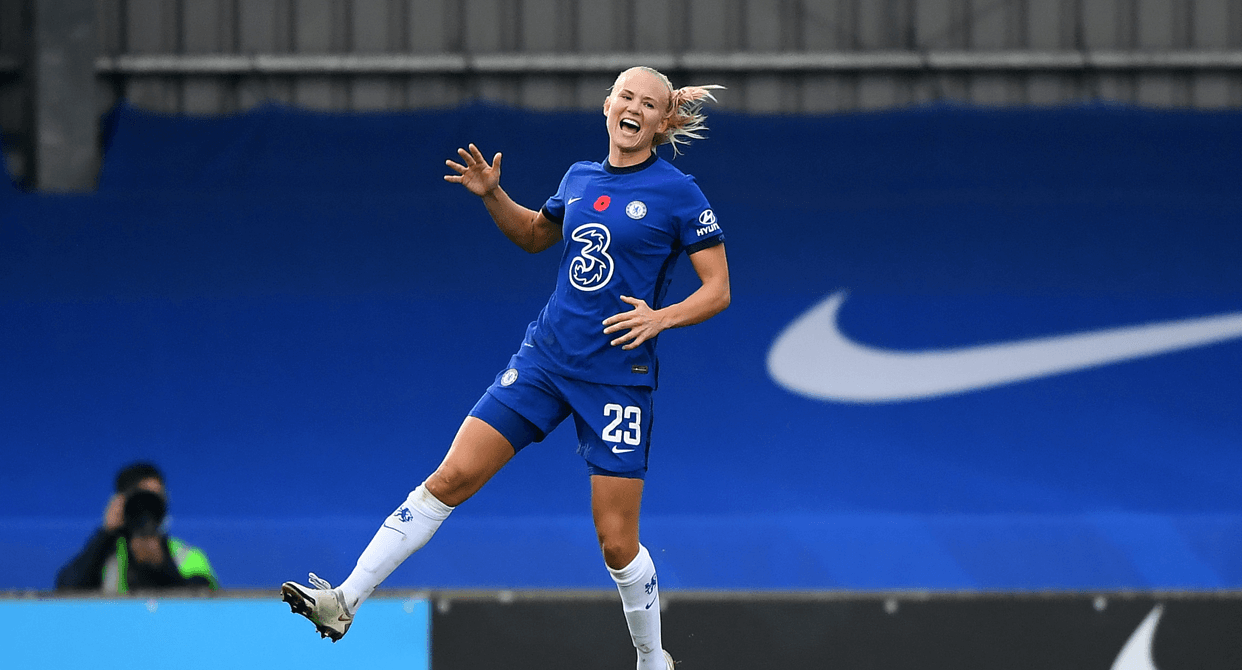 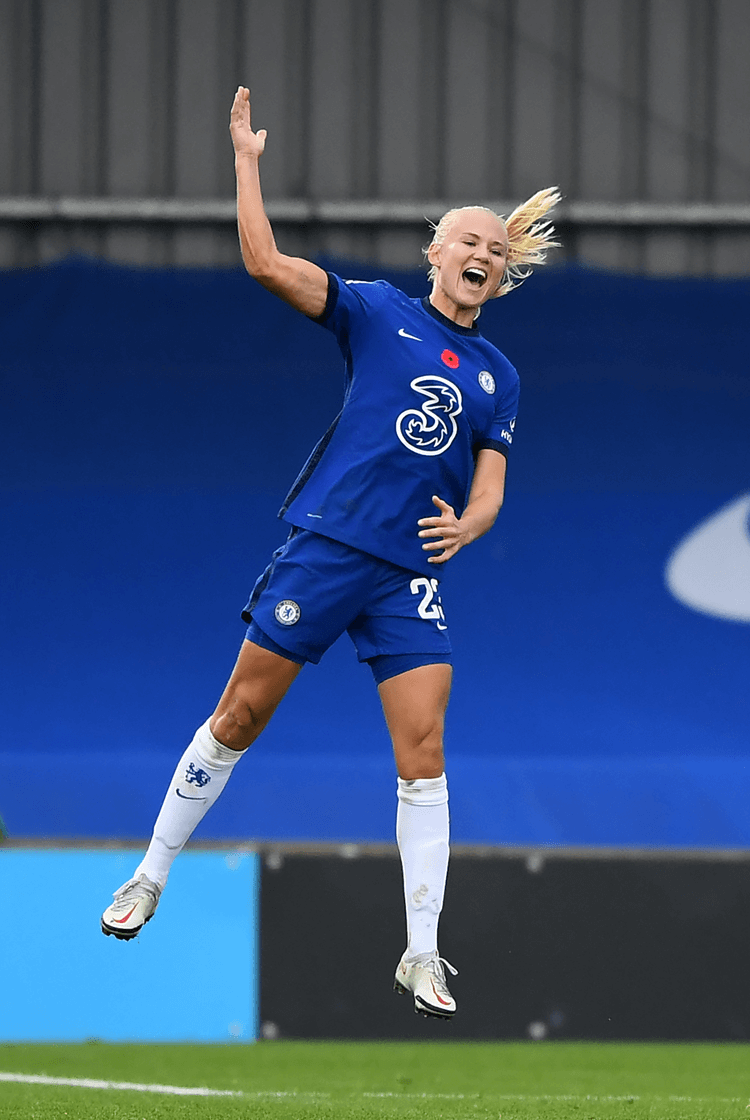 Profile
Chelsea made Pernille Harder the most expensive player in the world when, in September 2020, they paid Wolfsburg £300,000 for the Denmark international, who at the age of 27 was very much considered at her peak. Also considered by many the best player in the world, she arrived in London having won four successive Bundesliga titles and reached two Champions League finals after joining Wolfsburg in 2017.

"Pernille has got a fantastic mentality and one that has put her where she is," said Chelsea's manager Emma Hayes. “It's important to note that we, as a football club, can't take any of the credit for this. What I know about the best – and I have coached a lot of top players in my career – is that they have unbelievable attention to detail. The best always do it on training pitch, day-in, day-out, and Pernille is exceptional in training. The goals she has contributed, the assists and the involvement she has in creating our goals have been unbelievable."

Tactical analysis
Harder is a versatile player capable of playing in any position across her team's attack. She has proven herself as a leading striker, in a role behind the striker, and towards the left and right, and because of that is capable of adopting deeper positions to offer support when her team is building an attack. Using an open body shape, Harder typically receives on her back foot and regularly scans while doing so, ensuring she can play the ball with accuracy and pace, and often into areas beyond the opposition's defence. The tempo and execution of her passes regularly turns opponents when they attempt to negate the threat she poses.

That she targets spaces between and behind defences (below) makes it harder for defenders to detect her position and body shape. She ghosts between opponents, adopting positions just off their shoulder, and then offers a change of pace and judgement of timing that makes her difficult to mark tightly. By again scanning the spaces around her before receiving possession she can then not only also anticipate the movement of her teammates, but quickly progress the ball before the opposition has succeeded in reorganising or becoming compact.

A similar sense of awareness is also demonstrated when she is the one playing accurate forward passes, and when judging the appropriate time to attack or play off of one touch, or indeed to return the ball back to the midfielders supporting her and then move into new positions to create further passing options. There consistently exists a fluid approach to how she performs, in regularly moving between central areas and wide channels to offer support.

When wide she seeks to outrun her opposing full-back, play one-twos with those who are central, and target spaces behind her opponent to drive into the penalty area before playing the ball. From central positions she prioritises joining attacks at later stages, and creating passing lanes around the penalty area with which she can receive in the space she wants to shoot at goal. That awareness to create those spaces also reduces the need to duel with opponents, or benefits her teammates; by adopting, for example, a position behind the second central defender in anticipation of a cross, she demands the attentions of further defenders who otherwise would have prioritised those teammates.

That she poses an aerial threat contributes to that being the case. That same threat exists at set-pieces, when she largely resists challenging for the ball beyond the penalty spot, and instead remains in spaces around the edge of the penalty area (below) to then target second balls or knockdowns. Her enthusiasm, regardless, also leads to her forcing play and conceding possession. There are occasions when her forward passes are overhit – if the opposing goalkeeper starts from an advanced position her attacking potential is undermined – and her reluctance to engage in one-on-one duels means that intense pressure can lead to a similar outcome.

The same intelligence that is such a strength when she has the ball also exists when she is attempting to defend. When her team is without possession, she uses a level of deception that involves her hiding her intentions before, at the right moment, stepping across or in front of an opponent to challenge for the ball and dispossess that opponent or directly regain it, often having resisted running to make a regain until then.

Role at Chelsea
Harder is most consistently selected as a central attacking midfielder, behind Chelsea's starting strikers, from where she poses so constant an attacking threat. She is regularly given the freedom to drift into the channels and target spaces behind opponents, and is consistently willing to receive, as she demonstrates by moving to create passing lanes after playing the ball.

Her relationships with strikers Bethany England and Sam Kerr, and her combination with wide players Ji So-yun and Fran Kirby, offer particular potential. When playing possession wide, Harder favours doing so between defenders by delivering lofted, diagonal passes for her teammates to run on to; when she is the one receiving, her well-timed movement around the edge of the penalty area creates the option for Chelsea to transfer the direction of the relevant attack from a wide area into where Harder can be found in space before shooting at goal.

There are also occasions when Harder is selected as a wide forward – on either the left or right – and therefore instead occupies spaces on either wing. When doing so she looks to drive forwards with the ball and, instead of delivering crosses at an early stage, advances into the penalty area from a wide position before playing into the spaces that exist.

That she is so comfortable in a variety of attacking positions and so technically impressive naturally means she attempts to shoot at goal from a variety of angles, and often with accuracy and power. From the edge of the penalty area she scans to detect her opposing goalkeeper's positioning before potentially bending the ball towards a top corner; when attacking from wide, she attempts quick shots from difficult angles that are challenging for a goalkeeper to detect.

Her passing ability, similarly, makes her capable of changing the direction and momentum of play, and often involves her cutting the ball back to between opponents. Ensuring her body shape largely disguises her intentions and therefore that opponents struggle to prepare for the direction and speed she will apply to playing the ball, Harder regularly succeeds in playing through and around defences.