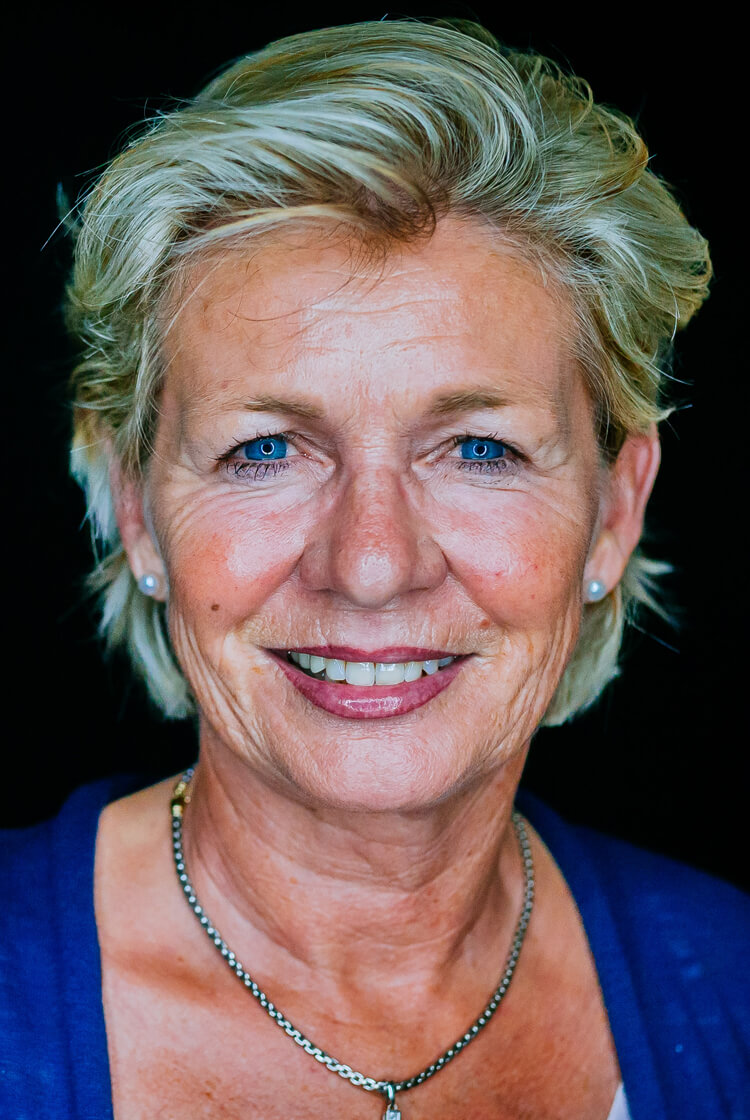 It would be a lie to say the battle is over.

It never is. We are still working hard to make sure women’s football gets the attention it deserves. I’ve always been fighting for it. And I will continue do so. Because it’s my life.

I was there, as a 17-year-old player, when it all started. The German women’s national team played their first ever match against Switzerland in 1982. It was a real spectacle, broadcast live on national television – and 5,000 people showed up for it in Koblenz.

There were many men in the crowd. Reporters asked them: “Why are you here today?”

“You know why! We’re waiting for them to swap shirts at the end of the game,” many answered.

That kind of stuff went on for decades. I thought to myself: aren’t there any other places to go to see topless women? But, after a while, I stopped paying attention to such nonsense.

From the get-go, silly comparisons were made to the men’s national team. “Let’s see if they can do better” – that kind of thing. The media didn’t have the faintest idea about women’s football; that’s the reason those questions came up time and time again.

I even had an offer from Playboy magazine. What was the point of that, I wondered. I wanted to play football, not pose in the nude.

We were all amateurs. I was working at a butcher’s then, serving customers at different branches, making sausages. Initially I had wanted to become a carpenter, like my father. But he said: “Never, ever! Look at how I look getting home each night.”

I didn’t mind the sawdust, but the sponsor of my father’s club offered me an apprenticeship at the butcher’s. I enjoyed it.

Later, I moved to TSV Siegen, where I worked in a wholesale flower shop, driving a small truck to the retailers. Roses were my favourites.

The breakthrough for the women’s game came when the national team won the European championships in 1989. For the first time, women’s football was respected and accepted. Okay, a few machos thought otherwise, but you’ll always have them. We won the Euros again in 1991 and 1995.

I quickly decided to study for a coaching licence - first B, then A in 1995 - to develop my tactical understanding of the game. We later encouraged national team players to do the same, irrespective of their future plans. You always benefit from education.

I was a very passionate and opinionated player (below). Looking back, I realise I often argued with my teammates, since I was better than many of them and therefore a little short on patience sometimes. That’s why suffering a knee injury at 25 was a decisive moment for me.

Watching from the stands for a few months, I saw my team in a different light. They were trying their hardest, you couldn’t fault their effort. My whole attitude changed: I realised that my task was to help them. I had to be less self-centred and make sure that I supported those around me rather than have a go at them.

That realisation - you can also call it maturity - was the first step towards becoming a coach, even if it was a subconscious one. I had actually dreamed of opening up a stationer’s, with a state lottery concession. But things turned out differently.

I was working in health insurance when Berti Vogts called and asked if I wanted to become assistant coach of the German women’s side in 1996, working alongside Tina Theune. As the men’s national team manager, appointing the women’s coaching team was part of Berti’s remit.

We benefited greatly from having been players before. At the Olympics in Atlanta, for example, we had been knocked out early due to training twice a day in preparation, like maniacs. We were dead before the first ball was kicked.

Tina and I agreed that would never happen on our watch.

"I liked the way Jürgen Klopp’s Dortmund pressed, but you can’t hope to copy that if you don’t have the right players for it"

The first three, four years were really tough for me, as I was also in charge of the Under-16 and Under-18 teams. At the same time, I did my Pro Licence badges, too. I was always on the go, never at home, earning peanuts.

Looking at my schedule, I calculated that I had worked 375 days in the course of one year. But, of course, there are only 365 days in the year. Four years into this triple workload, I told the German FA I was going to quit. Luckily, they agreed to take the Under-16s off me and pay me more money – but I still coached the U18/U19s by myself in addition to being assistant coach of the seniors.

My youngsters won the Euros in 2000, 2001 and 2002. In 2004, we were runners-up. All with an assistant coach, one physio, one doctor and a kitman. Looking back, I don’t quite know how we did that. When you do so many things at the same time, something has to give. It was a bit crazy.

We were envious of the men’s set-up, but there was simply no point holding a grudge.

I saw my job as making sure that I developed at least one or two players for the first team. Calling up the right players was vital in that respect. They had to be prepared to go all the way.

Coaching the youth team by myself, I would always tailor the sessions to the opponents at hand. As a coach, you don’t quite experience the highs of scoring the decisive goal. But there’s another feeling, one of deep contentment when you see your plan is coming together. That’s something you don’t get as a player.

There is a lot of psychology at play. You need to learn to read your team, by talking to them a lot and observing them closely. It’s also important for a team to be always self-critical.

Doing what’s right for your team also means picking the right tactics. In the national team, you don’t have 50 top players, but 25. My favourite set-up was always 4-2-3-1, but the way you play is always conditioned by the players at your disposal.

I liked the way Jürgen Klopp’s Dortmund pressed and how the players always changed positions, but you can’t hope to copy that if you don’t have the right players for it.

It didn’t make much sense insisting on a slow build-up from the back, either, if your team weren’t comfortable doing so. These days, many young players are calmer on the ball than those in my teams used to be. They’re more used to getting pressed. Everyone does it now. Technically, the players are on a much higher level than in the past.

But back then, against a team playing a high press, I made them play beyond the first pressing line with the first ball instead. I would have had a heart attack on the sidelines, otherwise.

The strategies were always evolving, year by year. Sometimes we played pressing in midfield, sometimes we pressed high in specific trigger moments. Sometimes we defended deeper because we had fast players on the break.

To hone our technique under pressure, we used to play against a lot of male youth teams from top leagues as part of our pre-tournament preparation.

After a few years in the job, experience tells you what the right course of action is, but it takes time to get to the point where you can trust your instincts to say the right things. After a while, I felt as if I had experienced every situation before and was always ready to react.

Still, every tournament was a new challenge. You can’t make any generalisations. All you can do is prepare your side as best you can for all the different things that might happen.

In the 2007 World Cup final, we were up against Brazil. It was my first tournament as national manager, after being promoted in 2005.

At 1-0 up with 20 minutes to go, Simone Laudehr, one of our best players, told me she couldn’t go on. She had to come off. I said: “Simone, you can’t come off. We still need one goal.”

Sixteen minutes later, she scored with a header.

We won the World Cup for the second time in a row.

"Nothing has really changed. I don’t think a woman would be accepted in the Bundesliga"

It was even more of a wild ride at the 2013 Euros. Two years earlier, we had been knocked out in the quarter finals of the World Cup, so the pressure was on. Six regulars were injured and we had to plug the gaps with young players, but the public didn’t really care about that.

We started quite poorly. Something had to change ahead of the quarter final against Italy.

We had this ritual in training: young against old in a shoot-out. I told the losing side they would have to give a series of talks on topics such as courage, passion, togetherness and honour. Young lost, but they really embraced the task.

“It’s an honour to play with you,” they said to one of our experienced players, Nadine Angerer. Others took apart a ballpoint pen and explained how the different parts worked together. I was totally taken aback.

We won against Italy, and that was the turnaround we needed to go on and win the tournament.

After winning the 2016 Olympics, I stepped down to work as director of scouting and the junior teams for the German FA. Do I want to go back to coaching? Right now, I’m not really sure.

If I did, coaching a women’s team or a men’s team would be of equal interest. But I don’t think a woman would be accepted in the Bundesliga or Bundesliga 2. When I was asked about the chances of that happening 10 years ago, I thought the time might be ripe in 10 years’ time. But nothing has really changed.

We need someone to break the mould and trust a woman in such a position. We’re still playing catch-up when it comes to positions of power. Not just in football. We earn less, too.

As I said before: the battle continues.