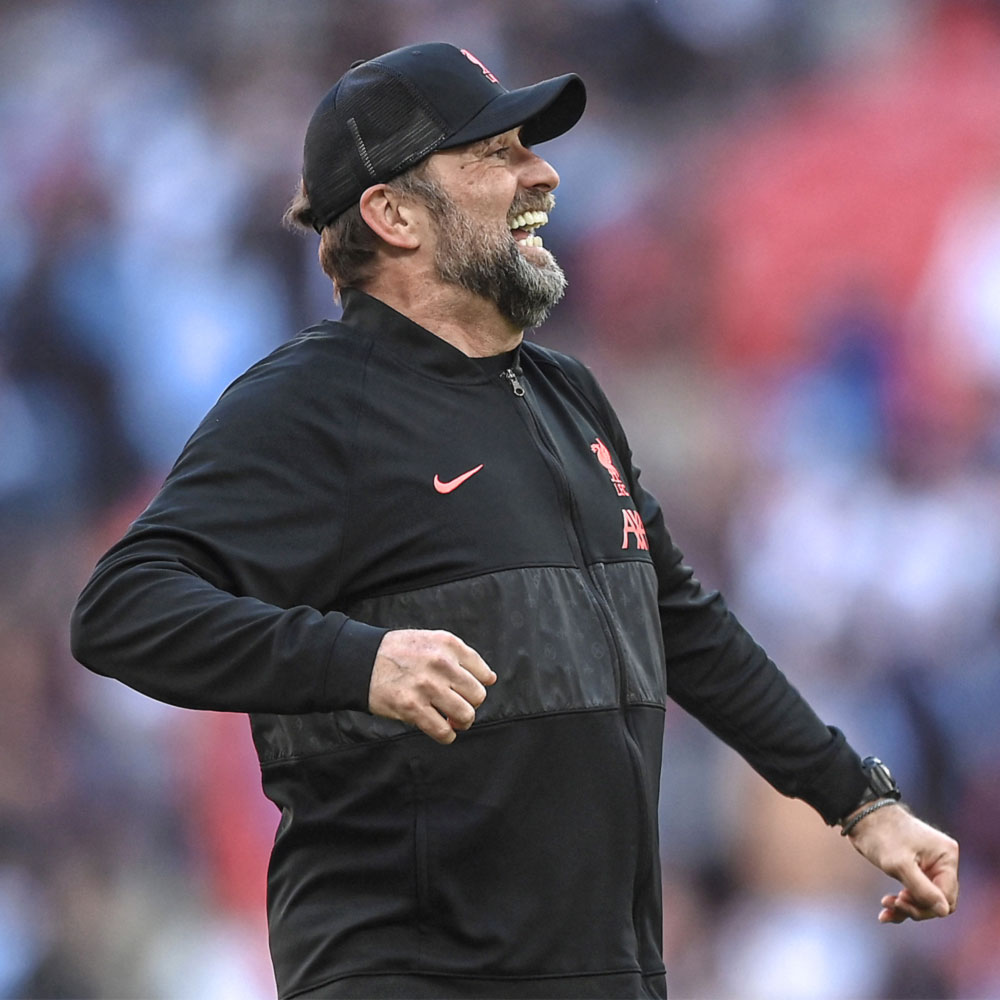 Jürgen Klopp led Liverpool into the final of the FA Cup for the first time in his reign, as his team produced a scintillating first-half display to kill off the treble hopes of Pep Guardiola and Manchester City at Wembley. The League Cup winners were quick out of the blocks against their injury-hit opponents, and went ahead early through a third Ibrahima Konaté headed goal in the past two weeks. Sadio Mané doubled the lead soon after, with a relentless high press that forced City second-choice goalkeeper Zack Steffen into a mistake he will likely never forget.

Mané's second – a glorious volley that beat Steffen at his near post – just before the interval gave City a mountain to climb in the second half. Although Jack Grealish pulled one back soon after the break, and Bernardo Silva struck late on, Liverpool held on to reach a first FA Cup final since they lost to Chelsea 10 years ago.

“I am absolutely proud," said Klopp after the game. "The first half was one of the best we have ever played. We did all the right stuff, scored in the right moments; an incredible game in the first half, I really loved each second of it. We respect the quality of City so much, it is so difficult to win against them, but because it’s these boys in my dressing room, we have a chance! We beat the best football team in the world, and that’s a pretty special moment.”

Guardiola defended his decision to start with Steffen over regular goalkeeper Ederson. “I haven’t spoken to Zack," he said. "It was an accident, but we need him to try because that’s how we play our football. Sometimes the strikers miss in front of the keeper, other times the keeper makes a mistake. It was a decision [to play him] from days ago. It is unfair when you play cups and you don’t play them. He deserves to play and after that he had a good game. He made good saves and is an exceptional keeper.”

Problems with the Liverpool press

Pep Guardiola set Manchester City up in a 4-2-3-1 in-possession shape against Liverpool’s aggressive press. Sadio Mané repeatedly looked to jump on to goalkeeper Zack Steffen. This was the route to Liverpool’s second goal, but more generally covered access into the deeper of City’s double pivot, usually Fernandinho (below). This forced City to play around, where Liverpool’s wingers jumped on to centre-backs Nathan Aké and John Stones. The only real escape for City came through clipped passes over the Liverpool front line and into their wide full-backs. If João Cancelo or Oleksandr Zinchencko were positioned deeper, Liverpool’s number eights could press wide. If they pushed slightly higher, they met the aggressive pressure of Trent Alexander-Arnold or Andy Robertson.

In response to Liverpool’s continuing and relentless high press, pivots Fernandinho and Bernardo Silva often dropped into the back line, sometimes receiving as City’s deepest players (below). As a result, both City full-backs pushed higher, with Gabriel Jesus offering inside from the right to support alongside number 10 Jack Grealish as a second central option. From the left, Phil Foden moved closer to Raheem Sterling as a second higher threat. City offered minimal threat running in behind, however, so Liverpool’s high back line could therefore consistently squeeze up to the halfway line. This enabled longer periods of higher pressing and sustained pressure on the City build-up.

Changes to shift the momentum

With Grealish struggling to link play as a central number 10, he was moved out to the left side for the second half, taking up a wide starting position ahead of Zinchenko. Foden was instead used as the number 10, working off Sterling’s central movements, while Jesus made curved runs inwards that threatened the spaces in behind much more (below). The Brazilian had a great chance through one such run at 3-1 down, but he failed to beat Alisson in a crucial 1v1. This increased threat into the spaces beyond helped push Liverpool’s back line deeper, with their higher pressing not as effective in the second half. As a result, Silva and Fernandinho could finally connect into their wide full-backs.

Thanks to Guardiola's changes, City progressed quicker and more consistently in the second half. The narrow attacking trio of Sterling, Foden and Jesus supported play from the right, with rotations through the inside channel helping City progress on this flank in particular. Zinchenko and Grealish held their width on the left (below), giving City the option of switching play to break into the final third. This pattern helped lock Liverpool into deeper periods of defending for longer spells, but the Reds defended well and with impressive compactness – both wingers often supported their full-backs in doubling up on City’s wider threats. A late Silva goal, created by the late substitute Riyad Mahrez – Guardiola’s only change of the 90 minutes – put extra pressure on Liverpool as full-time approached. City were unable to find an equaliser, though, and departed the FA Cup in the semi finals for the third straight season.

Jürgen Klopp set Liverpool up in their familiar 4-3-3 attacking shape against Manchester City’s 4-4-2 defensive block. Sadio Mané started as the centre-forward, in between Luis Díaz on the left and Mo Salah on the right. Mané's movement caused City problems from the start, whether dropping to combine with the midfield trio in the inside channels, or drifting wide on the Liverpool left (below). Díaz was also supported by Andy Robertson’s forward runs from left-back, with Thiago – who dropped alongside Fabinho during build-up to receive behind City’s first line – offering even more presence on that side. It was from an attack on the left that Liverpool won the corner that led to Ibrahima Konaté’s early headed goal. On the right, meanwhile, Naby Keïta pushed higher from midfield to help connect into Salah.

Different roles for the full-backs

Robertson continued to push forward on Liverpool’s left, allowing Díaz to drift inside. With Mané still dropping from his starting position as centre-forward, Salah would mirror Díaz’s narrowing from the right. As such, Liverpool looked to create overloads through the inside channel, but Salah also threatened in behind with his runs across Oleksandr Zinchenko, looking to receive one of Virgil van Dijk’s long diagonal passes over the top. Trent Alexander-Arnold remained mostly withdrawn (below), however. He rarely overlapped beyond Salah to create attacking width and depth on the right. Instead, he looked to combine inwards, often moving into the inside channel when Keïta didn’t push as high. An outrageous switch of play from a withdrawn Alexander-Arnold found Díaz high and wide in the build-up to Liverpool’s third goal on the stroke of half-time.

The Manchester City press locked Liverpool towards the touchline much better in the second half. The front pairing of Phil Foden and Raheem Sterling pushed on to Konaté and Van Dijk. City’s closest wide midfielder worked along the touchline, pressing the Liverpool full-back on that side, while the wide midfielder on the far side narrowed significantly to mark whichever of Thiago or Keïta was further from the ball. This allowed midfielders Fernandinho and Bernardo Silva to cover Liverpool’s closest passing options in the central spaces much earlier (below), limiting the central build-up through which Liverpool had controlled long periods of the first half.

Liverpool defended much deeper in the second half. The central spaces through which they had worked so much quality build-up in the first half no longer existed, so they instead utilised the forward passing of Robertson and Alexander-Arnold to build around the City press. Díaz and Salah made inside movements to targeted the central spaces beyond the back line (below), with a significant pace advantage on both sides. Mané continued to support from a more withdrawn position or rotate with Díaz on the left, while Keïta offered delayed support to attack the second phase, should the runners fail to secure the initial forward pass.