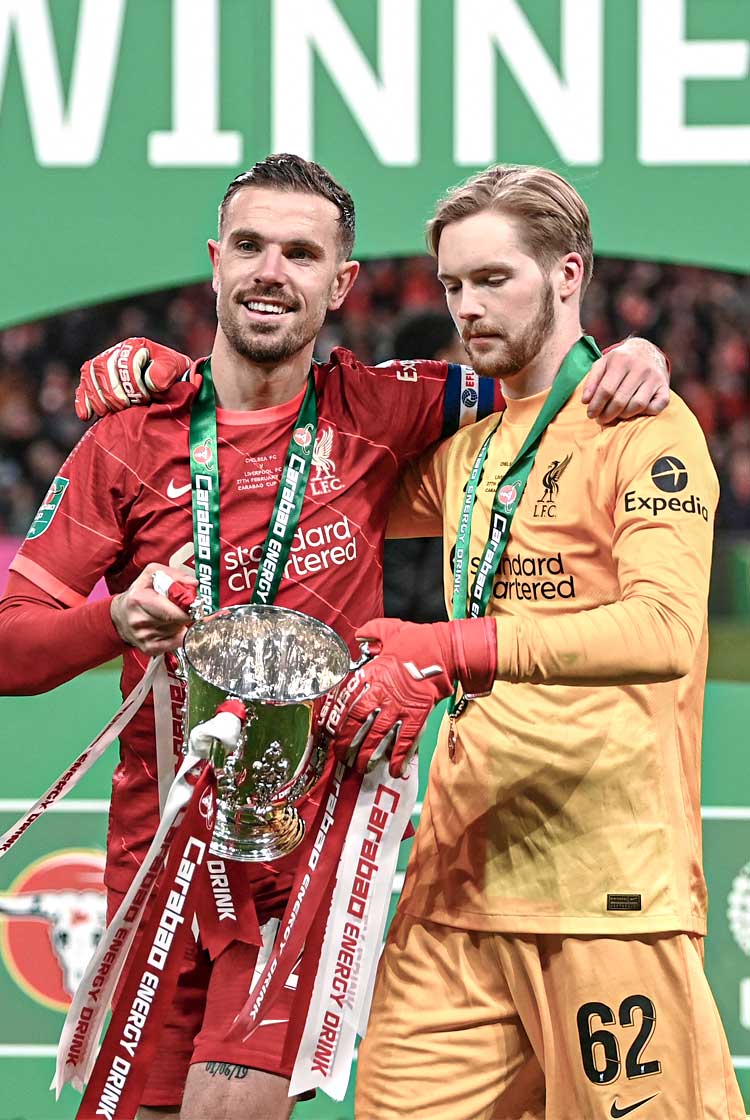 Liverpool won their first domestic cup competition under Jürgen Klopp after coming out on top of a dramatic penalty shootout against Chelsea. Following a goalless 120 minutes in which Mason Mount, Christian Pulisic, Sadio Mané and Mo Salah all missed golden opportunities to break the deadlock, and both teams had goals disallowed for offside, the League Cup final was sent to penalties. Every outfield player then scored their spot-kick before goalkeeper Kepa Arrizabalaga, who was brought on by Thomas Tuchel specifically for the shootout, skied from 12 yards to hand Liverpool a record ninth League Cup win. With 21 penalties scored, it was the highest-scoring penalty shootout of all time between two top-flight English teams.

The victory leaves Liverpool in with a chance of winning four trophies this season. "I am happy for the people to celebrate something like this," said Klopp. "That is the start, [but] we are not silly. We need to have luck."

Chelsea were set up in a 3-4-2-1 in-possession shape, up against Liverpool’s 4-3-3 block. The two narrow 10s, Mason Mount and Christian Pulisic, regularly moved out to the left, while centre-forward Kai Havertz dropped away from the Liverpool centre-backs. With Pulisic also dragging Virgil van Dijk across, space was created for César Azpilicueta to push forward with delayed runs from right wing-back (below). N’Golo Kanté then supported from the double pivot in the right inside channel. The clever co-ordination of the many Chelsea runners ensured they made a good start to the game.

The Chelsea wing-backs, Marco Alonso and Azpilicueta, played fairly withdrawn attacking roles in the first half, possibly wary of their opponents’ counter-attacking threat. Rotations in their front three then saw Havertz drift wider, and one of Chelsea’s number 10s move into a central position (below). The double pivot looked to find runners out wide when they could, with Alonso or Azpilicueta supporting underneath the ball once play had moved out to their respective flank. Liverpool pushed one of their central midfielders over to support the full-back; this proved an effective way for them to regain the ball.

Greater influence from the wing-backs

Chelsea began the second period with another strong spell, as both Azpilicueta and Alonso now pushed forward at the same time. The front three narrowed to condense Liverpool’s back line, before making direct runs in behind, while the double pivot of Kanté and Mateo Kovacic withdrew to cover the space in front of the back three. Chelsea played more direct in the final third, creating some of the best chances of the game through direct balls in behind – including the one from Pulisic into Mount (below), from which the England international hit the post.

Chelsea continued to use a narrow front line after Timo Werner and Romelu Lukaku were introduced for Mount and Pulisic (below). Reece James, who replaced the injured Azpilicueta, and Alonso maintained high positions from wing-back, while Werner and Havertz caused problems with runs across Liverpool’s back line. Lukaku’s ability to drop between the lines helped drag one centre-back out of position, creating more space to access a wing-back or number 10. Lukaku also made direct runs in behind, targeting the left inside channel or central areas. Kanté also pushed forward whenever one of Chelsea’s three centre-backs carried the ball into midfield.

With the game stretched in extra-time, Chelsea targeted the wide areas and space on the outside of Liverpool’s centre-backs. Werner’s direct runs on the left helped drag Ibrahima Konaté across, meaning Lukaku could isolate Van Dijk (below). This meant Chelsea could find their attackers quickly, and both wing-backs advanced to progress around Liverpool’s narrow 4-3-3 defensive shape. This gave Chelsea a route forward that avoided Liverpool’s central-midfield three, but could not quite lead to an all-important goal. Both Lukaku and Werner were caught offside at crucial moments.

Progress down the left

Liverpool were set up in a 4-3-3 against Chelsea’s 5-2-3 defensive block. Once Liverpool settled into the game following Chelsea’s strong start, they dominated the remainder of the first half. This came from wide movements by number eights Jordan Henderson and Naby Keïta. Initially starting on the left side of the midfield three, Keïta moved away from Chelsea’s double pivot, stretching the midfield in the process. This also created a key link between left-back Andy Robertson and the left-sided forward Luis Díaz (below), and Liverpool looked particularly threatening down this flank. Fabinho held his position as the single pivot, while Sadio Mané dropped from centre-forward and Mo Salah moved inside from the right.

When both Liverpool number eights advanced, Chelsea’s double pivot struggled to regain control in central midfield. Mané would then drop even further to provide a link into these forward runs through the inside channels (below), with the narrowed positions of Salah and Díaz dragging Chelsea’s wing-backs inside. This helped Robertson and Alexander-Arnold advance forward, with Liverpool locking Chelsea into a deeper block and dominating the rest of the first half.

Liverpool’s biggest threats throughout the second half were Salah and Díaz. In response to Chelsea pushing their wing-backs higher, Liverpool’s two wingers held wide starting positions (below), so they could attack against Chelsea’s wide centre-backs following transitions. Mané’s movements into central midfield also meant Fabinho could work back to support the back line in response to Chelsea’s high pressing. Although this meant Liverpool had one fewer player in the front line, Salah and Díaz more than made up for a brief lack of attacking numbers with their individual ability. Mané’s movement also meant Liverpool maintained a three-on-two overload against Chelsea’s double pivot, which proved key to their build-up play.

Fabinho’s deeper position as the single pivot was crucial in Liverpool’s build-up, especially as Chelsea’s wing-backs committed forward to press Robertson and Alexander-Arnold. With Chelsea’s front three covering Van Dijk and Matip, Fabinho added a central link to switch play or work the ball through central midfield, especially when Mané dropped. Liverpool played around Chelsea’s narrow front line via their full-backs (below). This meant they could connect into Salah and Díaz more frequently, even when Chelsea’s wing-backs pressed high.

Liverpool changed to a 4-2-3-1 for extra time, with James Milner forming a double pivot alongside Fabinho (below). This gave Liverpool more central protection to deal with Chelsea’s central runners, especially as their opponents tried to find their attackers as quickly as possible after a regain. Harvey Elliott, who only moved up to the Liverpool bench after a warm-up injury ruled out Thiago, then moved into a number 10 position between the lines. Although Liverpool continued to access the space around Chelsea’s block, they could not find the net. It eventually took a record-breaking penalty shootout for them to secure the win.