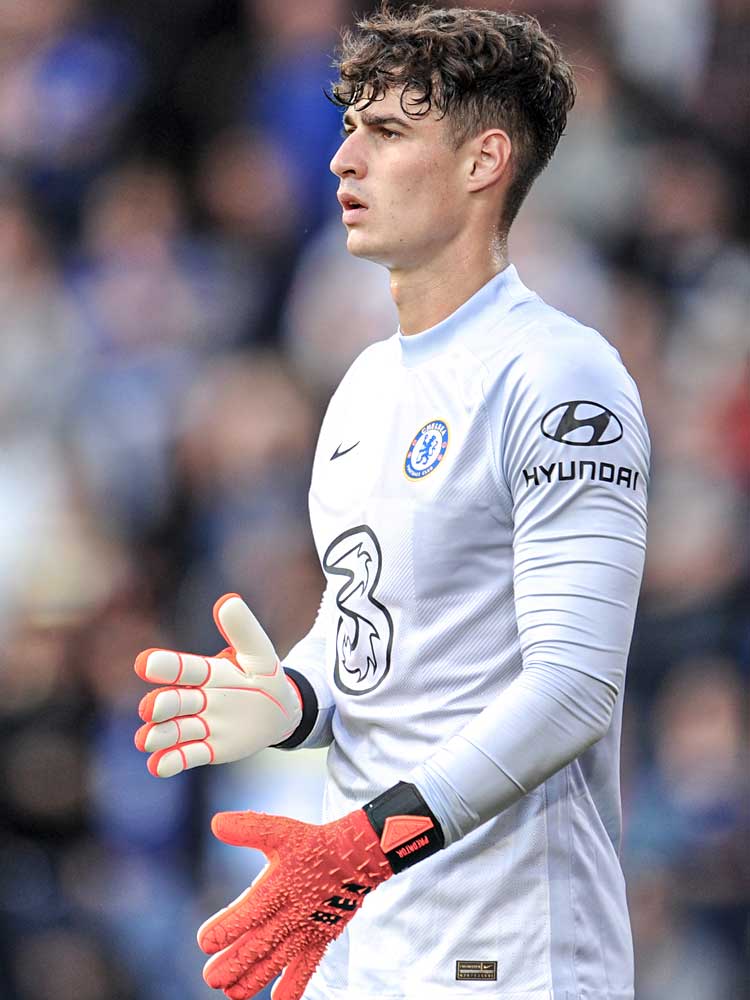 Profile
Chelsea invested the highest-ever fee paid for a goalkeeper, and broke their club transfer record when, in 2018, they recruited the £71m Kepa Arrizabalaga from Athletic Bilbao. At 23, he arrived in London with a reputation as one of Europe’s most promising goalkeepers, but he was also very much unproven, and represented a real risk.

At almost £5m more than Liverpool paid for Alisson a month earlier, the Spaniard, who had been identified as the successor to Thibaut Courtois, has struggled for consistency. Even before Chelsea signed Edouard Mendy in the summer of 2020, there were occasions when the veteran Wily Caballero was preferred to Kepa. “My first impression was that he is a very good goalkeeper,” Maurizio Sarri, then Chelsea's manager, once said of Kepa. That first impression is one that he has since struggled to maintain.

Tactical analysis
Kepa was signed by Chelsea for his exceptional ability with his feet, but it is impossible to look past the faults in the more traditional parts of his goalkeeping game when assessing his ability. Those are curious problems, because there were saves during his time in Bilbao that hinted at even the slightest chance he might be worth Chelsea investing in. However, the hefty fee they paid has weighed too heavily, and he has dealt with the pressure poorly. There is even an argument he has regressed since moving to the Premier League.

He very, very rarely – if ever – makes outstanding saves. If a shot is destined for the corner of Kepa’s net, it has become the norm to expect it to go in, where David de Gea, Hugo Lloris, Bernd Leno, Kasper Schmeichel, Ederson, Alisson, Lukasz Fabianski, Rui Patrício, Dean Henderson – most other Premier League goalkeepers, in fact – at least sometimes pull off that nature of save. Kepa simply allows far too many shots to pass him – and the stats back that up.

According to Opta’s expected goals data, in Premier League games in 2019/20 Kepa conceded 11 more goals than the shots on target he faced should have produced. His differential of -11 was by a distance the worst. For comparison, Lloris and Crystal Palace’s Vicente Guaita had a positive differential of more than 10, meaning they each prevented around 10 goals in 2019/20. Henderson, meanwhile, prevented nine and Schmeichel five. Even De Gea, who had a poor campaign by his standards, had a positive goals prevented differential – though only 0.3 – meaning he conceded roughly the same number of goals expected from the quality of chances he faced.

Given De Gea’s early struggles at Manchester United, there will have been hope at Chelsea that his fellow Spaniard Kepa would eventually come good, but he has remained ineffective. Unlike De Gea, Kepa does not use his feet to make saves very often at all, meaning low shots close to his body in one-on-one situations are rarely stopped. He doesn’t make himself big enough, and is too easily beaten.

He is too slow to react to shots from distance, often taking too long to start moving towards the ball or to begin his dive, and he has conceded long-range shots too often already in his short Chelsea career (above). There is also a flaw in his technique in that when he dives for high balls he moves his arm in an arc rather than directly to where it needs to be. His outstretched arm often ends up too far behind the rest of his body when he reaches the ball and so his palm is angled towards goal. He doesn’t get enough of his hand behind the ball, and has on occasion palmed the ball into his net when trying to claw a shot away from goal.

He doesn’t act with the conviction that top-level goalkeepers need to, which may stem from a lack of confidence and the pressure he is feeling at Chelsea. For example, for the free-kick that Kevin De Bruyne scored from at Stamford Bridge in June 2020, Kepa set up with far too much of the right side of his goal empty, and was then too flat-footed as De Bruyne struck (below). He did not move to his right to anticipate De Bruyne’s shot, presumably for fear of being wrong-footed, but the free-kick was far enough out that he should have started in a more central position. Instead, he left far too much of the goal to aim at and De Bruyne obliged by placing his shot there. It wasn’t even into the corner of the goal, and yet Kepa barely dived, utterly helpless.

His lack of conviction also extends to crosses, when Kepa shows too little command of his area. He opts to stay on his line when a cross is put into a position that gives him a decision to make, and his indecision will not fill the defenders in front of him with confidence. Centre-backs would generally prefer their goalkeeper to, at least some of the time, come and punch the ball clear. Kepa rarely does.

The one area in which he excels is at penalties. In the four seasons between August 2016 and August 2020, Kepa saved three of the seven he faced in league games for Bilbao and Chelsea. Over the same period, De Gea saved none of the 16 he faced.

Role at Chelsea
Under both Sarri – the manager who signed Kepa – his successor Frank Lampard, and most recently Thomas Tuchel, Chelsea have played a possession-based game and built out from the back. Kepa is perfect for doing so.

He is incredibly comfortable in possession and can play all kinds of pass. As well as playing short, accurate balls to their centre-backs, he can clip passes over attackers to beat a press and find a full-back. Moreover, he plays those balls with pace and a low trajectory, which makes them extremely effective in starting attacks quickly by leaving the first line of the opposition the wrong side of the ball. He is also capable of drilling low, accurate balls into midfield (above) which are incredible risky. The problems come when he is under heavy pressure from an opponent and tries to pass out when he needs to simply clear.

His poor shot-stopping and command of his area means Chelsea’s defenders have to work particularly hard to prevent shots. In 2019/20, Chelsea allowed their opponents fewer shots than every other team in the Premier League bar Manchester City, yet 10 teams conceded fewer goals than them – and Kepa was fairly useless as their last line of defence. He saved just 53.6 per cent of the shots on target he faced during 2019/20, giving him the second worst save percentage of any goalkeeper to make at least 10 appearances in a Premier League season since Opta started recording such data in 2003/04.

Kepa is a long, long way from a goalkeeper worthy of the world-record fee Chelsea paid for him. He has far too many obvious weaknesses, and Chelsea are a worse team with him in goal. It is hard to expect anything like a De Gea-like recovery.