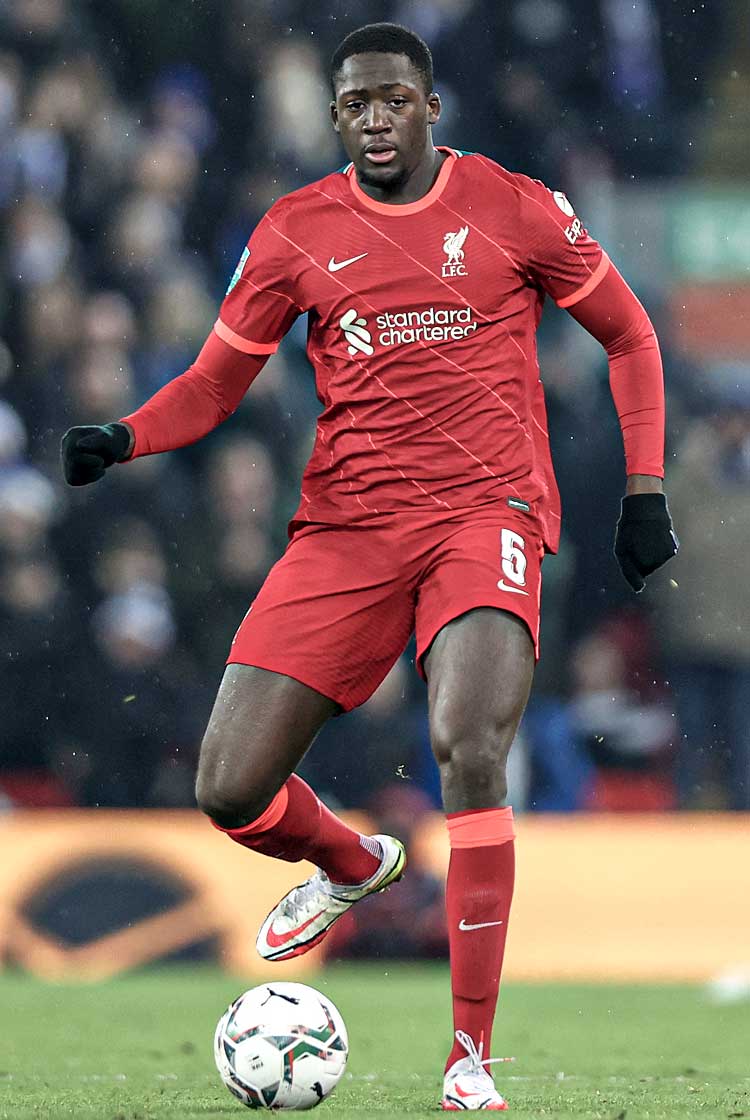 After Liverpool’s extreme injury problems in defence in 2020/21, it came as little surprise that their first summer signing was a central defender. Virgil van Dijk, Joe Gomez and Joël Matip all spent significant periods on the treatment table, and left Jürgen Klopp so short of defensive that has was often forced to play midfielders Jordan Henderson and Fabinho in central defence. He also brought in Ozan Kabak on loan.

Liverpool then paid €41.5m to trigger Ibrahima Konaté’s release clause, despite having been reluctant to invest in the January transfer window. Van Dijk, Gomez and Matip returning to fitness only served to show how much the Liverpool hierarchy admired the young Frenchman. “I think we all agree he is an exceptional talent: physically outstanding, good footballer as well,” said Klopp. “He has played games pretty early for us. He had to adapt to our formation and to his teammates. We just couldn’t go in the season again with three centre-halves, especially with three coming back from long-term injuries.”

Konaté is adept as a central defender in either a back three or a back four. When he steps out of defence to press or to follow an opponent (below) he takes an aggressive approach. It is rare than an opponent will manage to secure the ball when he presses them given how strong he is. Once he gets tight to his man, he does a good job of preventing them from rolling him, turning, or progressing play.

There are occasions when he concedes free-kicks. He holds his opponent with both arms to stop them from securing the ball, which also results in fouls committed. However, he will often do this in the knowledge that if he does not concede a free-kick, his defensive teammates could be left exposed. There is thought to his fouling and intelligence to defending.

Naturally, there is far more to his game, though. He is calm and competent in possession, with good passing ability and the vision to see tough passes. When bringing the ball out of defence, he looks most comfortable at right centre-back, and he looks to break lines with his passing using his stronger right foot. He often bends passes into strikers or wide forwards who make runs through the right inside channel, putting spin on the ball to evade opponents (below). He can either look to find a teammate’s feet in front of the opposition’s defence, or aim to put the ball into the space in behind.

When he is selected in the centre of a back three, he can play direct forward passes by striking through the ball to target the wing-backs with cross-field passes. He has shown with many of these kinds of balls that he can produce accurate balls over long distances, too.

When he is the defender providing cover behind his partner, he shows good anticipation to quickly adjust his position and sniff out danger. If he is the last defender and there is little margin for error with his positioning and judgement as to when to engage his opponent, he is impressively decisive. On top of this, he has the acceleration to match fast opponents, and he uses his arms and upper-body strength cleverly to reduce the chances of them getting away from him.

His good anticipation also extends to his attempts to make interceptions and to his defending inside the penalty area. He is calm and measured, and is also willing to use his body to block shots and attack crosses when required.

Since arriving at Liverpool, Konaté has played both on the right and left sides of central defence in Klopp’s preferred 4-3-3 formation. When used as the right-side centre-back, Konaté has played alongside Virgil van Dijk. In these games, he averages fewer duels, interceptions and aerial challenges compared to when he plays on the left side and is partnered with Matip.

As the right-sided centre-back, Konaté provides cover behind Van Dijk when he presses into midfield or competes for an aerial duel, and is also effective at getting across to cover behind the right-back. With Trent Alexander-Arnold so important to Liverpool’s in-possession approach, he naturally moves into very high positions, and opponents will often target the space behind him. Konaté covers across the pitch well – he is quicker than Matip or Gomez – and will delay the opposition or force play towards the touch line. Meanwhile, teammates are able to make recovery runs and help the team get back into their defensive shape. Alexander-Arnold often recovers back through the inside channel to support Konaté on his left shoulder, while the single pivot drops into the back line (above).

When on the left side of central defence, Konaté has taken a more aggressive approach. He competes in more duels and makes more interceptions than any other Liverpool centre-back, with most of these coming when he is playing as the left centre-back. Clearly, he can do either role well.

However, as was the case at RB Leipzig, he can be too aggressive at times, and he has conceded free-kicks in dangerous positions. This has happened most often when he covers behind an advanced Andy Robertson, or when he has followed an opponent into midfield.

With the ball at his feet, Konaté has looked far more comfortable at right centre-back than he has on the left. He can hit cross-field passes to Liverpool’s left side effectively, targeting the overlapping full-back or runs in behind made by Sadio Mané or Diogo Jota (above). These prove most effective when the centre-forward has dropped into midfield and tempted an opposition centre-back out of their slot. However, Konaté has overhit a significant number of his long passes so far for Liverpool, with a drop in accuracy compared to his time at RB Leipzig. This may have been down to him playing in a back four and looking for a full-back’s run, rather than a higher and wider wing-back that he might have been targeting at Leipzig.

There's no doubting Konaté's talent, or the bright future ahead of him. Under Jürgen Klopp’s guidance, he has every chance of becoming one of the world’s leading centre-backs.