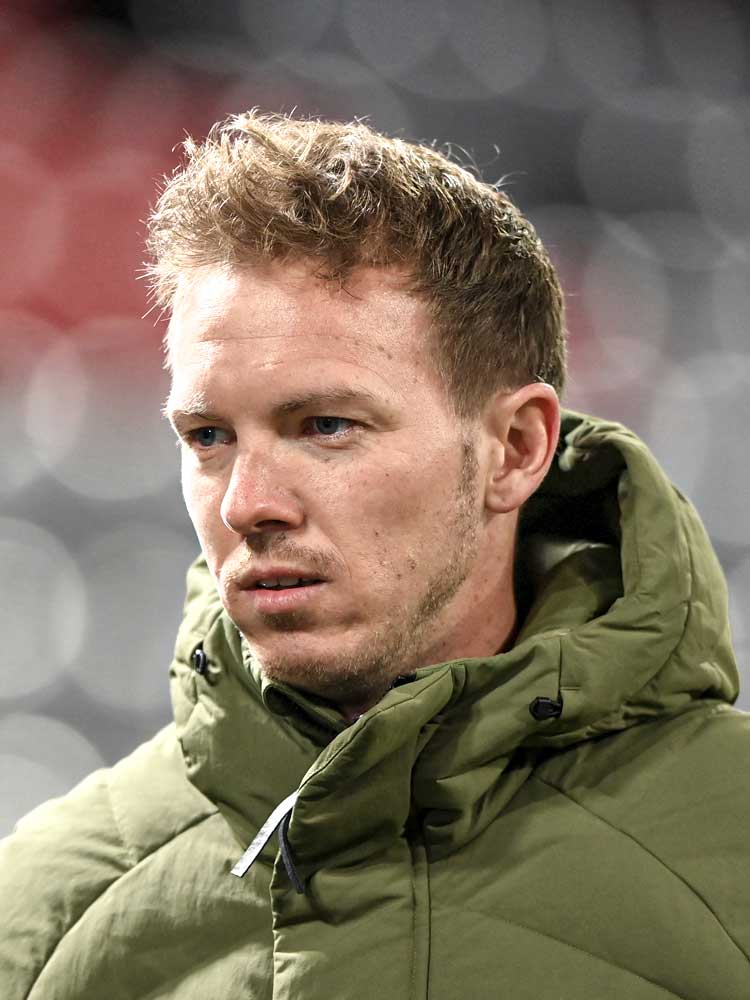 Julian Nagelsmann was only 28 years old when Hoffenheim made him the Bundesliga's youngest ever head coach. To provide further perspective, he was only 16 when in 2004 José Mourinho inspired Porto to Champions League glory, and was born in 1987, the year after Sir Alex Ferguson was appointed manager of Manchester United.

Nagelsmann has been heavily influenced by the pressing philosophy of Ralf Rangnick, who was behind RB Leipzig recruiting him from Hoffenheim in 2019. He was also once coached by Thomas Tuchel, who was overseeing Augsburg’s second team when a then-20-year-old Nagelsmann suffered the knee injury that would end his playing career. Tuchel first asked him to start scouting opponents, and later appointed him the coach of 1860 Munich's under-17s.

"Thirty per cent of coaching is tactics, 70 per cent social competence,” Nagelsmann once said of his approach, which has taken him to Bayern Munich as the successor to Hansi Flick. "Every player is motivated by different things and needs to be addressed accordingly. At this level, the quality of the players at your disposal will ensure that you play well within a good tactical set-up – if the psychological condition is right."

Playing style
Germany’s Nagelsmann is an innovative coach recognised for his willingness to experiment with new technologies and data as he looks to improve as a manager and for ways to improve his team. While at Hoffenheim, a giant screen was erected at the training ground and used to correct player and unit positioning without requiring long breaks in training sessions. Those training sessions are known be played at a high intensity.

He set his team up in an attacking 3-5-2 system while they had possession, and a 3-4-3 or 5-3-2 when they had to defend. His three central defenders played out from the back. Kevin Vogt, in particular, was given responsibility for playing the ball forwards and progressing possession. In central midfield Florian Grillitsch protected their central defenders, covered Hoffenheim’s wing-backs when they advanced, and even withdrew into defence when needed. Two further midfielders created a square structure with wide forwards Mark Uth and Serge Gnabry. This shape helped the team to progressing play up the field.

With a better squad at Leipzig, Nagelsmann's favoured approach evolved. His team's basic structure was a 5-2-3, but they demonstrated similar principles to those witnessed in Hoffenheim's 3-5-2 (above) and 3-4-3.

More rotations in the central lanes meant they more chance of penetrating into the space behind the opposition's defence. Until Timo Werner's departure, he provided the majority of the team's runs in behind and he was supported by another run from his strike partner. After Werner's move to Chelsea, they changed striker regularly, and often played in a 4-2-3-1.

There was also more variety when Leipzig built possession (above) compared to Hoffenheim, as well as when they were attacking. Their wing-backs – usually Angeliño on the left and Nordi Mukiele on the right – initially provided their attacking width, but Leipzig's focus on central rotations (below) meant that the wing-backs sometimes moved infield to attack alongside their most advanced attacker. When they did so, cover was provided by a central midfielder, and the other central midfielder moved into a position from which they could rotate either into a wide position or through the inside channels.

Opponents regularly responded to the numbers attacking through the centre by defending with similar numbers, in turn leaving them vulnerable to Leipzig attacking around the outside. The many rotations were made possible by the versatility of Marcel Sabitzer, Dani Olmo, Emil Forsberg and others; players who were comfortable in a number of positions and could happily swap positions during a game.

Since moving to Bayern, Nagelsmann has mostly used a 4-2-3-1 built on the double pivot of Joshua Kimmich and Leon Goretzka. As was the case under Flick, Thomas Müller has remained the influential 10 behind Robert Lewandowski, but unlike Flick's team, Nagelsmann has selected wide players on the same wing as their stronger foot. Leroy Sané plays on the left, and Gnabry or Kingsley Coman plays on the right. Müller often drifts close to Lewandowski to play as a second striker, and rotates with one of Kimmich or Goretzka. The width provided by their wide players and their attempts to attack around the outside of their opposing full-backs increase the forward's space. Similarly to Nagelmann's Leipzig, Bayern's front four also rotate from positions between the lines, in turn creating space for either Kimmich or Goretzka to advance into.

A further change has involved the adventurous Alphonso Davies attacking earlier from left-back than the right-back. When he does so Sané drifts infield (below) and into the left inside channel, meaning there is the potential to create overloads in midfield and to combine with Lewandowski and Müller.

Defending and pressing
Nagelsmann's Leipzig side were successful in pressing with a lone striker supported by two attacking central midfielders, who were able to force play into a trap out wide where the advanced wing-backs lay in wait. If possession remained central, one of Leipzig's deeper-positioned midfielders advanced to create a diamond structure with the forward and two attacking midfielders (below) that was not only difficult to play through, but could overload an opposition midfield three. After allowing passes out from goal-kicks to be played, the defence then advanced as high as possible so that that diamond had support underneath it.

If possession was instead being built in wider areas, that diamond drifted across, and the far-side wing-back moved infield to form a double pivot with the spare defensive midfielder behind that diamond. Attacks that continued along the touchline were, in turn, defended against by the wing-back, the closest attacking midfielder, and potentially the nearest central defender.

Nagelsmann encouraged a high press throughout 2020/21, and he was rewarded with an increase in the number of regains in the attacking half and attacking third for Leipzig. A further consequence was that opponents were often forced to attempt long balls over that press, leading to battles for second balls and regains in their own half.

On the occasions they didn't succeed in regaining possession in advanced areas, their priority became preventing opponents from carrying the ball through the centre of the pitch.

At Bayern, Nagelsmann's 4-2-3-1 becomes a 4-4-2 or four-diamond-two when out of possession, with Müller is likeliest to instigate their high press by advancing from his starting position to join Lewandowski (below). When working as a front two they seek to force the ball wide and to screen the opposition's defensive midfielders while moving towards the opposition's central defenders. When they require support, Goretzka moves forward from alongside Kimmich, whose admirable defensive work leads to numerous regains.

Both wide forwards are instructed to work back to join Goretzka and Kimmich, forming a flat midfield line when a mid-block is required, or a diamond shape when attempting to press. Whichever approach Bayern are taking, the wide midfielders will focus covering the inside channel before seeking to press, allowing Goretzka and Kimmich to support the pressing efforts of their front two. On the occasions Goretzka advances, the far-side wide forward will move considerably further infield to increase their numbers in the centre of the pitch.

Their defensive approach is such that opponents are regularly forced out wide, where Bayern's full-backs are happy to push up and press, and do so in the knowledge that the remaining three defenders will drift across and that the far-side wide forward will move infield. Should either Kimmich or Goretzka drop back behind the pressing full-back, the far-side wide forward will be needed even further infield. It is that organisation that helps make them so effective on the counter; at the point of a regain, they have the numbers in central positions to progress forwards. Add to that the quality and vision they have in attack and Bayern are a real force when the opposition are caught out of shape.