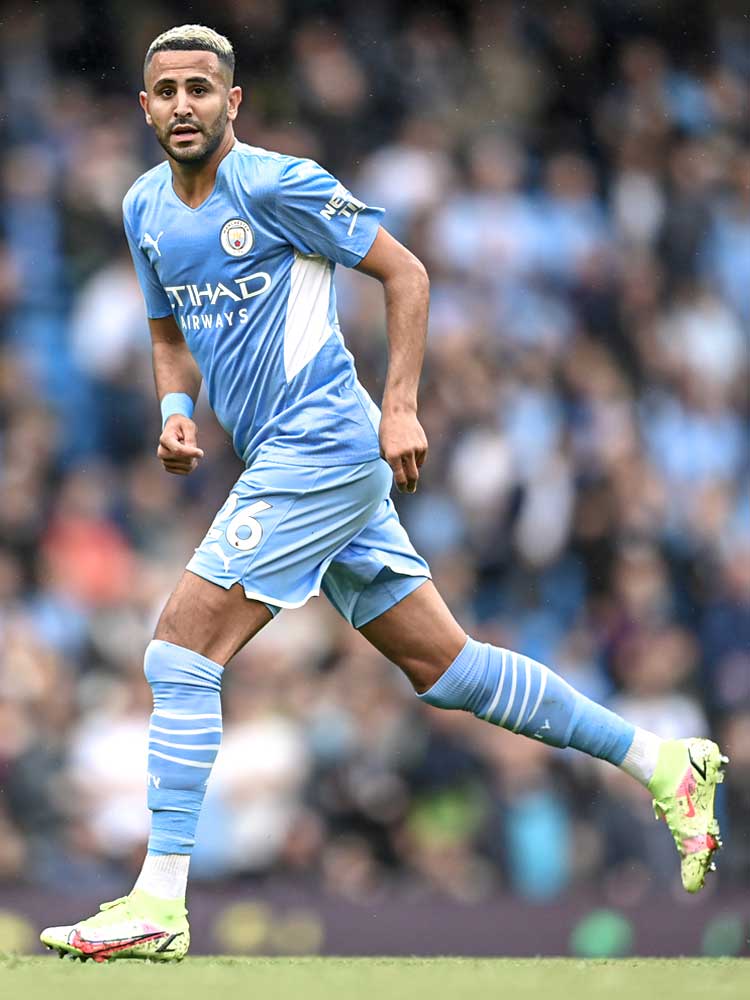 Profile
Leicester City have unearthed some remarkable talents before selling them on for huge money, and there is arguably no bigger success story from their approach than that of Riyad Mahrez. Born in the northern suburbs of Paris, Mahrez began his career with French lower-league club Quimper before a move to the more renowned but less enjoyably named Le Havre – reportedly after he had turned down offers from both Paris Saint-Germain and Marseille. His tricks then attracted attention from further afield and a move to then-Championship Leicester for just £400,000 was confirmed in January 2014. His career has been filled with little but success ever since.

Promotion to the Premier League was secured at the end of his first season in England, before Mahrez went to the World Cup with Algeria. Leicester then made a famous surge to safety under Nigel Pearson, before his replacement, Claudio Ranieri, led Leicester and Mahrez to the greatest title triumph of the modern era. Mahrez, the 2015/16 PFA Player of the Year at the age of 25, stayed for two further seasons before moving to Manchester City for £60m. Despite doubts as to whether he might struggle for first-team football, he played a key role in his first season as City recorded a colossal 98 points and became the first team since Manchester United in 2009 to retain the Premier League title. “Riyad is an exceptional player,” said his manager, Pep Guardiola. “For the quality, the passes and especially his mentality and aggression to score goals.”

Tactical analysis
Much of Leicester’s success was built on devastating transitions in which Mahrez played a crucial role, but he first had to adapt to a very different approach in the shape of a possession-based game under Guardiola. However, his direct running, dribbling ability and the threat he provides on the opposition's goal from the right side of attacks has remained consistent at both clubs.

There are few in the Premier League whose first touch and close control is comparable with Mahrez’s. He brings the ball under control with sensational precision – the kind of detail and level of skill that sets him apart from other very good wingers – meaning he needs only one touch when other elite players require two, and that he is quicker and sharper to his next move, making him even more difficult to defend against.

He is therefore able to receive the ball in the tightest of spots, and teammates can trust him to keep it. On the occasions he hugs the touchline, play can be switched to him even when it appears he doesn’t have enough time or space to get the ball under control; he is able to both bring the ball down and progress his team’s move, often by beating an opponent down the line with a single touch. When he comes infield into more crowded areas, he is able to receive possession under pressure. Opposing defenders know they can’t get too close to him in either situation, but leaving him space to start dribbling invites just as many problems.

Mahrez stands out most for his dribbling ability – particularly given that, at 5ft 10ins, he is relatively tall for a player who can twist and turn as effectively as he can. He has the balance, skill and poise to lose opponents, and he has a larger stride than most other top-level dribblers. He is also deceptively strong on the ball given his slight frame.

Defenders will try and show Mahrez away from his stronger left foot – he provides a significant threat on goal from distance with his left – but since moving to City he has improved significantly with his right. Where once opponents could take even the slightest solace in knowing he would always try and find a route on to his left foot, they increasingly face an attacker far more willing to shoot with his right. He was already skilled at working himself a shooting opportunity on his left, but he has added another element to his game, and has even scored some eye-catching goals with his weaker foot (above). The fact he is so much more confident on his right also means he can catch opponents out by taking them on around the outside and working crossing positions on his right.

Role at Manchester City
Mahrez features almost exclusively on the right for City, where he has overtaken Bernardo Silva as Guardiola’s first-choice. He had little problem adapting from Leicester’s counter-attacking to City's long periods in possession, in part because Guardiola also places great importance on attacking transitions – even if City’s regains tend to come in advanced areas. As Mahrez showed at Leicester, he is able to carry the ball forwards and at great pace; from a higher starting point, his already significant transitional threat grows even more dangerous for City.

When City are building play from the back, Guardiola likes his wingers to make the pitch as big as possible by hugging the touchlines. When Mahrez moves wide, their regular right-back Kyle Walker moves to add to City’s numbers in central midfield (above). If play is on the other wing and then a switch bypasses Walker and goes straight to Mahrez, Walker makes an overlapping run as Mahrez moves towards goal with the ball.

Mahrez is incredibly difficult to stop when he isolates a defender, and Walker’s runs only add to the Algerian’s threat because opponents have to try and anticipate any attempt by Mahrez to slip his teammate in. He is extremely skilled at disguising through balls to others, and also at using his teammates’ runs to create space for himself.

Mahrez is similarly happy in central positions. It has become increasingly common to see him move infield to join their striker in a central position while their full-backs provide the team’s width. City sometimes instruct both wide forwards to move into centre-forward positions, and then use their central striker as a false nine to drop into midfield and draw an opposing centre-back towards the ball. Doing so tests opposing full-backs, who have to decide whether to follow the wide attackers into the centre of the pitch, which tends to create a huge space out wide for City’s full-backs to attack into (above). Mahrez is always looking to get on the ball and influence the game; he demands the ball even when he moves off the wing into crowded central positions.

If their striker makes a move to run in behind the opposition, Mahrez attacks the space between the lines. That tactic was more common when playing alongside Jamie Vardy at Leicester but it has also been seen at City. He is a real threat when making horizontal runs from out to in to receive the ball and then progress play with his stronger left foot.

When Mahrez moved to City, questions were raised both over his £60m fee and whether he would be able to help improve a team that had only recently broken the Premier League points record. There is no longer any doubt that a player who cost Leicester so little in 2014 has also been worth every penny to City.