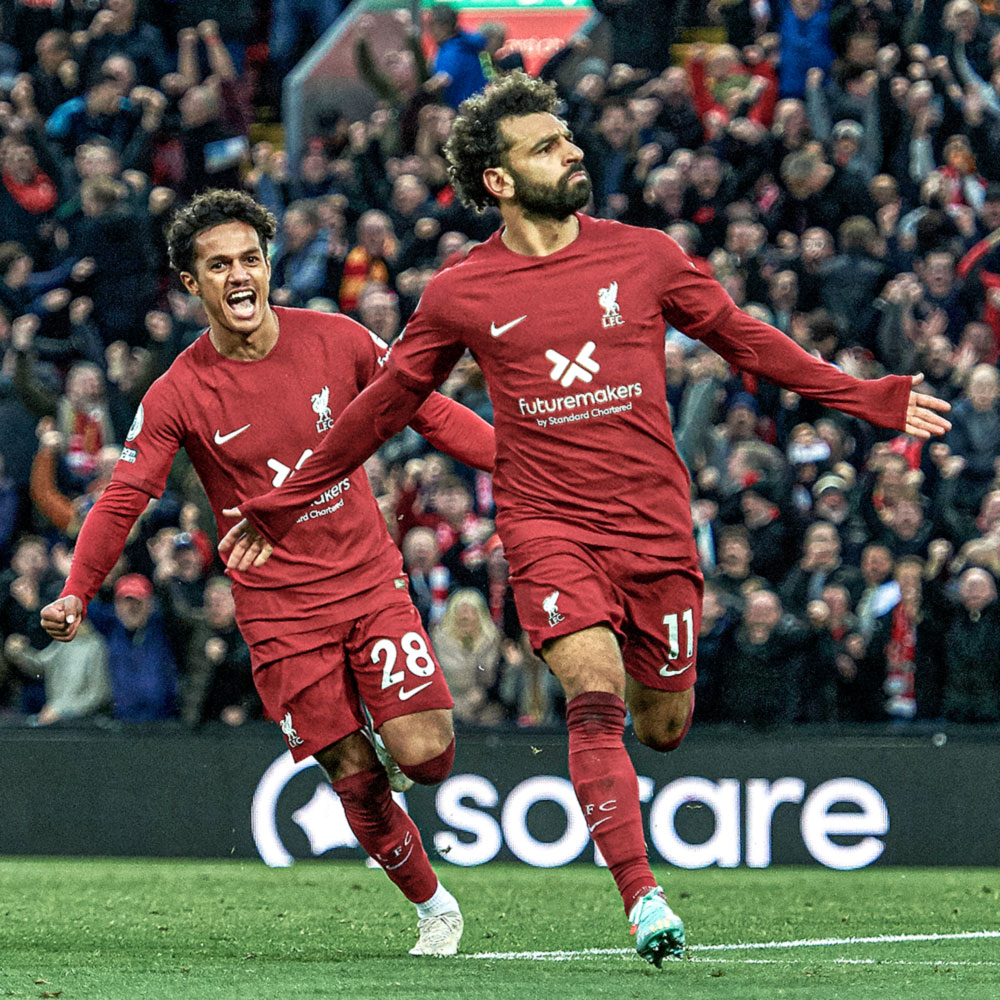 Liverpool put their recent defensive troubles behind them to inflict a first Premier League defeat of the season on Manchester City and record their own first league win since the end of August. After a breathless and goalless first half, it looked like the visitors had taken the lead when Phil Foden shot past Joe Gomez on the Liverpool line early in the second half – but referee Anthony Taylor was advised to check by the video assistant referee and duly chalked the goal off for a foul by Erling Haaland on Fabinho earlier in the move. Instead, City found themselves behind with 15 minutes to go, as Mo Salah spun João Cancelo to control a long pass from Alisson and finish coolly past Ederson in front of the Kop. Liverpool held on for a huge three points in a feverish Anfield atmosphere, with Jürgen Klopp sent to the stands after reacting angrily to the officials' failure to blow for a foul on Salah by Bernardo Silva.

"You have to play to your limits and further, and that's what we did," said Klopp after the game, when he also apologised for his red card. "We defended in an extremely well organised but very passionate way, closed the right gaps, challenged in the right areas. How we defended the box, and especially the six-yard box, was absolutely exceptional."

"The referee spoke with my assistant and Jürgen and said he was not going to make fouls unless it was clear," said Pep Guardiola, in reference to the disallowed goal. "All the game it was 'play on' and 'play on', except the goal we scored. But we didn't lose the game for that. Nobody knows what would have happened, but it was a moment when we had momentum and control. After, we lost because of a mistake."

The City press and Firmino’s role

Jürgen Klopp set his Liverpool team up in a 4-2-3-1 in-possession structure, with Fabinho and Thiago as a double pivot in midfield and Harvey Elliott and Diogo Jota in advanced wide positions. This allowed the hosts to use Mo Salah in a much more central role than so far this season, with Roberto Firmino as the number 10 behind him. Visitors Manchester City pressed high with both number 10s, Kevin De Bruyne and Ilkay Gündogan, jumping on to Liverpool centre-backs Joe Gomez and Virgil van Dijk (below). Erling Haaland withdrew to act as a deeper screen in between Liverpool’s double pivot, with Phil Foden and João Cancelo aggressively jumping on to opposite numbers Andy Robertson and James Milner when possible. Firmino’s dropping in between Bernardo Silva and Rodri, who were ready to jump on to Liverpool’s double pivot if needed, proved the key tactical battle during Liverpool’s build-up. Whenever Firmino received between the lines, often using Jota’s movements inside as a decoy, Liverpool could progress forward. If he was well screened by City, though, Liverpool had to adapt their movements and positioning.

When Thiago dropped out into wide areas to help Liverpool progress forward, this disrupted the City double pivot. Firmino and Jota rotated ahead of him, which affected Rodri in the visitors’ midfield, as Liverpool now looked to build around City’s high press. As with Jota on the left, Elliott was used as a wrong-footed wide midfielder on the right, who could move inside to create space for Milner to overlap (below). With Van Dijk able to bypass City’s press with long but accurate switches of play, Liverpool could work their way into City’s half quicker, before then combining with shorter passes to create from there.

Liverpool’s quick and direct build over and around the City press helped them target their forwards earlier in the second half. A more advanced role for Bernardo Silva robbed the visitors of his pressing energy ahead of their back line; instead, one of the three centre-backs had to jump out to press, which forced Cancelo to recover back quicker in a 3v3 against the Liverpool attack (below). Direct forward runs from Salah and Jota in particular caused the City defence problems, with both missing good opportunities to put Liverpool ahead before Salah eventually did so. The hosts lacked any consistent ability to construct moves through sustained possession, as their 37.8 per cent share suggests – but they defended well in lengthy spells and carried a threat with intermittent and isolated counter-attacks.

Liverpool’s direct build-up continued to be based on Firmino dropping between the lines. This often dragged Akanji inside from his position as the right-sided centre-back, which created more room for Jota to attack in behind against the recovering Cancelo. Liverpool’s incisive forward passing indirectly linked into Salah’s runs in behind from the right, from out to in and working off Firmino’s link-up play. Salah would begin further inside (below), allowing him to threaten more centrally whenever Milner pushed higher. Ultimately, the match-winning combination came through Alisson superbly launching a counter-attack into Salah, who won his 1v1 with Cancelo before calmly lifting the ball over Ederson.

Progressing wide from a back three

Once they settled, Pep Guardiola had set Manchester City up in a 3-4-2-1 shape, with João Cancelo pushing forward on the right side to create the attacking width in more of a wing-back position. Phil Foden took up the equivalent position on the left, with Bernardo Silva joining Rodri in a double pivot, and Kevin De Bruyne and Ilkay Gündogan operating as two number 10s in the inside channels. City looked to work the ball around the first line in Liverpool’s 4-4-2 defensive structure, with Gündogan and De Bruyne dropping to bounce the ball back and draw one of the hosts’ central midfielders. This forced Liverpool’s wide midfielders to narrow, allowing City to progress into Cancelo (below) or Foden and break into the final third. There, De Bruyne and Gündogan played high and as close as possible to Erling Haaland.

The battle in transition

The key tactical battle in the first half featured City’s back three and double pivot against the counter-attacking Liverpool quartet of Salah, Firmino, Jota and Elliott (below). Whenever the hosts won possession and broke City’s initial (and intense) counter-press, they carried their biggest threat. If the City counter-press worked, they nullified the Liverpool threat and looked to work the ball as quickly as possible into Haaland. The striker would look to set into one of his number 10s, or further back into the double pivot. When he did the latter, the visitors had extra numbers flying forward in wide areas – but Joe Gomez and Virgil van Dijk defended the width of the goal from any resulting crosses brilliantly in the first half.

The threat from the City right

Liverpool’s wide midfielders increasingly narrowed to help Thiago and Fabinho limit the impact of Rodri and Bernardo Silva during City’s build, and stop De Bruyne and Gündogan from dropping to bounce. As a result, wide spaces appeared for the visitors. Andy Robertson especially found himself underloaded 2v1 against De Bruyne and Cancelo (below). As Van Dijk moved across to support Robertson, De Bruyne in particular could target Haaland in 1v1 situations against Gomez. Foden and Gündogan’s combinations on the left were less direct in working the ball to Haaland, but both wide pairings consistently penetrated into the final third. They just failed to create the clear-cut chances to truly test Alisson in the Liverpool goal.

In the second half, Guardiola swapped Silva and Gündogan round; the former now played as the second number 10 underneath Haaland, operating in the left inside channel. This gave City more energy in the first line of their higher press, and a higher transitional press from Silva to win first and second-phase balls higher up the pitch. It also gave City another ball-carrying threat driving forward, with Silva looking to link with Haaland and Foden on the City left – as shown in the build-up to Foden’s disallowed goal (below). City did lose the transitional cover underneath the ball, which Silva had provided in the first half. This contributed to Liverpool creating several counter-attacking chances after the break.

Silva also rotated wide with Foden, moving in behind James Milner to free the inside channel for deeper runs from Gündogan (below). This led to less cover underneath the ball against any Liverpool counter-attack, of course, but it did enhance their attacking play on the left – which carried more of a threat than the City right in the second half. This rotation also allowed Haaland to drift away from the ball and find more central positions to attack in his intriguing battle with Van Dijk. City did create chances from their left, but none to threaten Alisson enough as Liverpool held on for an important win.