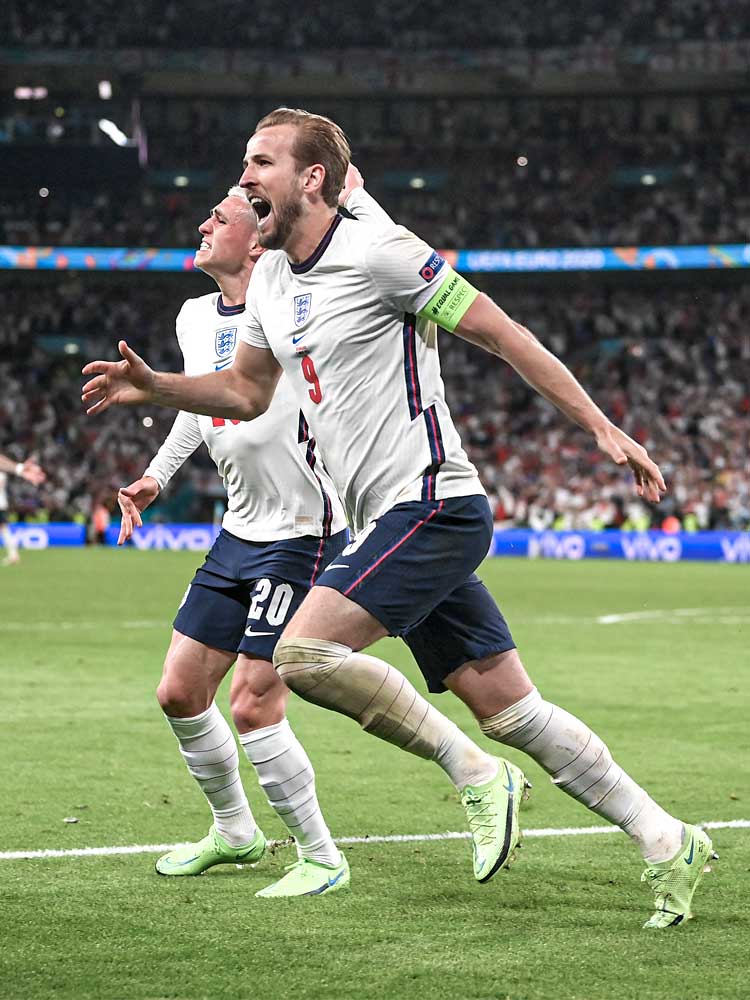 England progressed to the final of a European Championship for the first time in their history when they impressively recovered from conceding their first goal of the tournament to outplay their opponents and win in extra time. Denmark's progress to the final four also represents one of Euro 2020's success stories, but 25 years on from Gareth Southgate missing the penalty that led to England's cruel defeat by Germany – also at Wembley – at Euro '96, his team passed the greatest test of their character to progress to the final against Italy. Raheem Sterling, perhaps the player of Euro 2020, was again superb, and influential in the own goal scored by Simon Kjaer before winning the contentious penalty from which Harry Kane scored the rebound and secured victory. "We said to the players we’ll have to show our resilience and come back from some setbacks, and we’ve done that," Southgate said. "There’s one more massive hurdle to try to conquer. Italy are a very good side." His opposite number, Kasper Hjulmand, said: "One thing is to lose a game, but losing this way is a disappointment. These guys have fought a lot. It feels bitter."

England were organised by their manager Gareth Southgate into a 4-2-3-1 formation led by the front three of Bukayo Saka, Raheem Sterling and Harry Kane. Their opponents, Denmark, defended with a compact 5-4-1.

Sterling attacked infield from the left, encouraging Luke Shaw to overlap from full-back, and on the right Saka held his width in front of the more reserved Kyle Walker, whose positioning contributed to England often forming a temporary back three. Declan Rice often remained more withdrawn than Kalvin Phillips at the base of midfield, and Mason Mount or Harry Kane often drifted across to the right inside channel and inside of Saka, in the knowledge that Phillips was supporting from behind the ball.

England took longer to progress forwards via their combinations towards the right because they involved playing shorter passes than those exchanged between Sterling and Shaw. They, regardless, succeeded in advancing around Denmark's defensive block on both sides of the pitch. Further rotations between Sterling and Mount enhanced their potential to progress the ball forwards, and often by providing decoy runs that contributed to Kane being fed between the lines under reduced pressure, even if he remained outnumbered.

The individuals in the second line of Denmark's block demonstrated good timing when pressing, which they did with aggression to force Rice and Phillips backwards, and which they occasionally extended to Harry Maguire and John Stones while being covered by the relevant central defender in between the lines. Kane's increased focus on drifting wider and his combinations with Saka unsettled Jannik Vestergaard and Simon Kjaer, and led to penetrations in behind, and by extension goalscoring chances for Sterling as he drifted into a central attacker's role in front of Mount. After his first effort, Kjaer turned the ball into the goal he was attempting to defend, following Saka's cross.

It was attempting more direct play into Kane that led to England sacrificing control. He struggled against the aerial prowess of Denmark's central defenders, and too few numbers competed for second balls. It was direct passes into the runs of Mount, Sterling and Saka that offered greater potential, and made it difficult for Denmark to move upfield.

When Jack Grealish was introduced on the left, Sterling attacked from the right. England also managed the ball more effectively, particularly against Denmark's compact shape and the deep territory from which they defended, and they tested Kasper Schmeichel.

When Denmark reorganised to defend with a 5-3-2 they impressively limited England's space in the centre of the pitch, making their wider combinations even more important, and encouraging Mount to spend increased time alongside either Grealish or Sterling. Rice or Phillips also advanced forwards into the wide areas in an attempt to overload Denmark's wing-backs, regardless of Denmark's success in defending their penalty area.

Substitutes Jordan Henderson and Phil Foden, who respectively featured at the base of midfield and at number 10, enhanced the intense pressure England were applying. When Sterling won a penalty and Kane scored from the rebound, they then adopted a deep-set 5-4-1 to see out victory.

Kasper Hjulmand set Denmark up into a 3-4-3 formation led by Kasper Dolberg. Their opponents, England, defended with a 4-2-3-1 from which they applied an aggressive press.

Denmark's attacking width was provided by their wing-backs; further forwards, Martin Braithwaite and Mikkel Damsgaard attacked through the inside channels. They regularly played over England's front three when building possession, and demonstrated greater potential towards the right, behind Raheem Sterling's advanced positioning. With Luke Shaw advancing to take Jens Stryger Larsen, Harry Maguire and John Stones were required to shuffle across to defend against Braithwaite and Dolberg, who also moved through the right inside channel, contributing to the space that existed for quick combinations, and through balls being played to between Kyle Walker and Stones. Switches to Joakim Maehle proved less effective against Bukayo Saka's willingness to defend from deeper territory, and with the cover provided by Walker.

The visitors built possession more effectively when either Pierre-Emile Hojbjerg or Thomas Delaney drifted wide or succeeded in drawing Kalvin Phillips out of position. With Mason Mount taking whichever of Delaney or Hojbjerg wasn't being tracked by Phillips, Declan Rice was left to cover both Damsgaard and Braithwaite, and his struggles to do so meant them receiving between the lines and Denmark's wing-backs advancing to contribute to the creation of a four-on-three.

The combination of each meant Denmark building some momentum and, for a period, dominating the ball and forcing England to defend from deeper territory. They then took the lead from Damsgaard's free-kick.

When England responded, Denmark's greatest threat from their low block came on the counter, and mostly via their inside forwards. Dolberg's movements away from Maguire and Stones were also influential; when he instead remained advanced, Braithwaite advanced to alongside him and Damsgaard withdrew into the left inside channel.

After making numerous personnel changes, Denmark reorganised into a 3-5-2 in which one of their front two regularly withdrew into deeper territory. Forward, off-the-ball runs were provided from their central midfielders, who sought to receive in between the lines, so England responded by defending with a mid-block, and their success contributed to Denmark's attempted counters lacking the runners they required to support their front two. When England took the lead, Denmark attempted to push numbers forwards, but they lacked conviction against England adopting a 5-4-1 and a deep block.