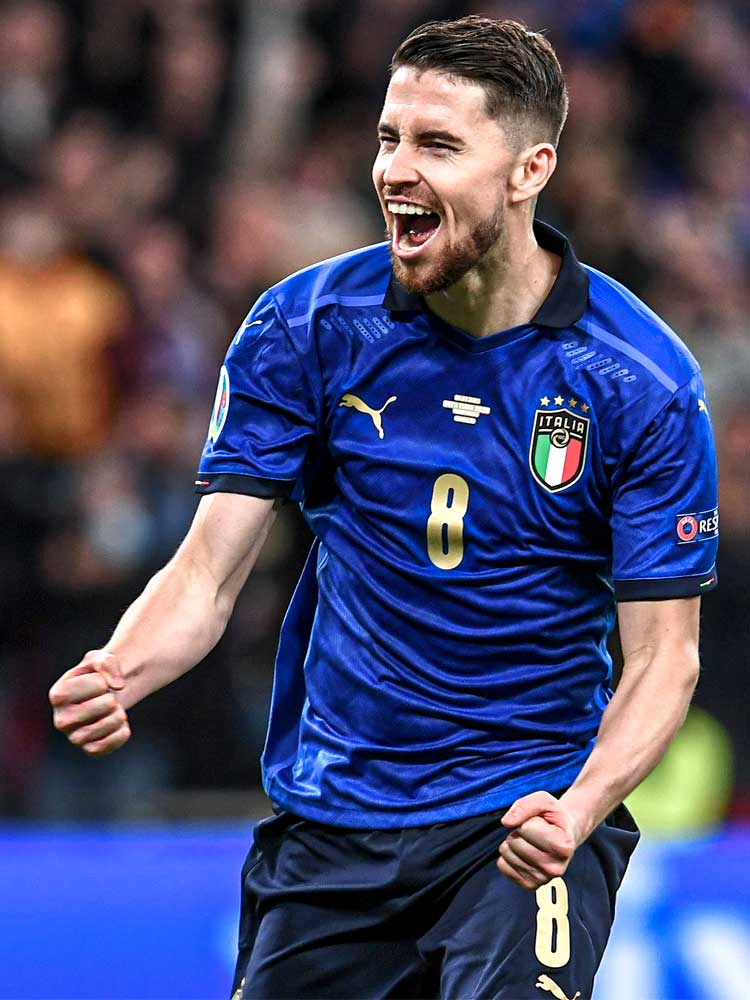 Italy passed their greatest test of Euro 2020 to progress to the competition's final by beating Spain on penalties. For perhaps the first time they appeared to have encountered a superior opponent, such was Spain's dominance of the ball and the influence of Pedri and Sergio Busquets. Federico Chiesa's second-half goal was largely against the run of play and appeared likely to prove enough to take Italy into Sunday's showpiece, and yet Spain succeeded in finding a way through their resilient defence when Spanish substitute Álvaro Morata provided his latest dramatic contribution to their attempts to win a first trophy since 2012 by scoring an equalising goal and forcing extra time. Roberto Mancini's team then resisted Luis Enrique's to force penalties and, with Italy leading 3-2 after four penalties each, Jorginho demonstrated admirable composure to stroke the most pressured of penalties into the bottom corner and seal victory. "There always comes a game where you have to dig in to win," Mancini said. "It wasn't easy by any means, and yet we are into the final." Enrique, also once a high-calibre midfielder, said: "Has anyone noticed what an 18-year-old boy named Pedri has done in the Euros? Not even Andrés Iniesta has done it. What Pedri has done in these Euros I have never seen with an 18-year-old, not from anyone in the Euros, World Cups, Olympic games. It’s something away from all logic."

Italy were organised by their manager Roberto Mancini into a 4-3-3 formation led by the front three of Federico Chiesa, Lorenzo Insigne and Ciro Immobile. Their opponents, Spain, defended with a 4-1-4-1, and mostly a mid-block.

They struggled to establish spells of possession, so direct runs in behind Spain's defence initially appeared their most effective method of progressing forwards. Towards the right Nicolò Barella drifted into a wider position away from Spain's central midfielders, and Chiesa offered runs outside of Jordi Alba; towards the left, Emerson Palmieri advanced from left-back and into the spaces vacated by Mikel Oyarzabal's willingness to press Leonardo Bonucci and Giorgio Chiellini, and Insigne held his position to force César Azpilicueta to remain withdrawn and, by extension, increase Emerson's space. Marco Verratti also attempted to contribute there, but Koke responded by pressing him.

With Spain soon applying an even more aggressive press on the left, switches of play to Chiesa offered a suitable route forwards – beyond that Emerson provided by continuing to overlap. Mancini's team was regardless more regularly undermined by the often inaccurate passes they made after regains.

Spain's defence continued to risk leaving space in behind so Italy targeted Immobile, Chiesa and Barella via direct passes, but Spain regularly recovered the ball when they did, and partly did so because of the advanced positioning of their goalkeeper Unai Simón. Italy's deeper defending was used to absorb Spain's periods of possession, and to encourage Spain's central defenders to advance; on one such occasion Italy's front three countered forwards and Chiesa scored.

The Azzurri continuing to defend from deep territory meant them almost exclusively attacking on the counter. Domenico Berardi replaced Immobile, and worked effectively through the inside channels with Chiesa; between them they targeted the outside shoulders of Spain's central defenders, and did so without the support that was previously being provided by their full-backs. Shortly after Berardi's introduction, Insigne was also given a more central role from which he provided an influential link when they broke forwards.

Spain's equalising goal and the extent to which Italy were struggling with their shape forced Italy to make further changes that involved Andrea Belotti operating as a central striker, Manuel Locatelli providing forward runs inside of Italy's wide players, and Italy advancing from their deeper block in an attempt to more effectively cover the spaces between the lines, where Spain were posing such a threat. Doing so meant them more regularly accessing their wide forwards, in turn discouraging Spain's full-backs from advancing, and directly playing into Belotti. They regardless required increased numbers to defend the central areas of the pitch, so fewer runs were made to support Belotti, who therefore succeeded in progressing the ball forwards only when he withdrew into deeper territory or when switching play.

Luis Enrique set Spain up into a 4-3-3 formation built on the midfield three of Sergio Busquets, Koke and Pedri. Their opponents, Italy, pressed with that same shape and, when required, withdrew into a deep-block and a 4-1-4-1.

Dani Olmo regularly withdrew from his role as Spain's central attacker to contribute to the creation of overloads against Italy's three central midfielders. Koke withdrew back to alongside Busquets at the base of Spain's midfield, and Pedri advanced to alongside Olmo. With Italy attempting to aggressively press during Spain's periods of building possession, one of their central defenders followed Olmo; Spain's wide forwards remained high and wide, and Jorginho prioritised Pedri. It was when Leonardo Bonucci and Giorgio Chiellini retained their positions that Italy's spare midfielders became uncertain over whether to follow Olmo or to focus on Koke and Busquets, and that uncertainty contributed to Spain's dominance of the ball.

César Azpilicueta and Jordi Alba retained their positions, and remained braced to react if possession was lost in midfield and Italy countered forwards, when Federico Chiesa's pace and Lorenzo Insigne's trickery gave Italy such potential. It was when Spain instead broke forwards that they advanced, and provided overlaps outside of Ferran Torres and Mikel Oyarzabal. With Koke making forward runs through the right inside channel, and Pedri drifting towards the left, encouraging Ferran to move infield and therefore increase the space for Alba to advance into, it was the superb Busquets' dominance in midfield that ensured that they continued to dominate the ball and to resist Italy's different pressing approaches.

Spain continued to create goalscoring chances, but not of the quality they would have hoped, and largely because of the depth of Olmo's positioning when they built possession. The wide positioning of Ferran and Oyarzabal, intended to stretch Italy's back four, meant them also having to work infield into where Italy offered increased numbers. It was instead Pedri's influence from between the lines, particularly when Jorginho instead followed Olmo, that began to tell; a superb through ball into the run of Oyarzabal proved their clearest opening.

With Emerson Palmieri advancing at an earlier stage, attacking transitions started to offer greater promise. Olmo moved wide to link play, Ferran moved infield from the left, and their midfield three advanced further forwards as they attacked on the counter; improved goalscoring chances existed until Italy abandoned their higher press to instead form an extremely deep and compact low block that involved all 10 outfielders defending from their defensive third.

Álvaro Morata was introduced after Italy took the lead, and Spain's full-backs worked to provide their width outside of Morata, Oyarzabal and Olmo – featuring as a permanent number 10 – operating between the lines as a three. Italy's congested defensive block, regardless, regularly forced the ball wide, and defended convincingly against the crosses that followed.

When Rodri came on to provide further defensive protection during moments of transition, and Gerard Moreno to support Morata, Spain's shape became a 4-2-3-1. Olmo and Pedri rotated effectively through the left inside channel and, when Morata withdrew to receive and impressively combined with Olmo, he was presented with the space to calmly score their equalising goal.

Those who withdrew from their front line continued to threaten from between the lines, particularly when they moved to receive from the defensive third and then link into Morata's runs in behind. Pedri's passing range and Olmo's desire to turn and drive forwards contributed to them effectively penetrating around Italy's central block – from which they sought to press outwards and force the ball wide – but without creating the chance they needed to score a winning goal.