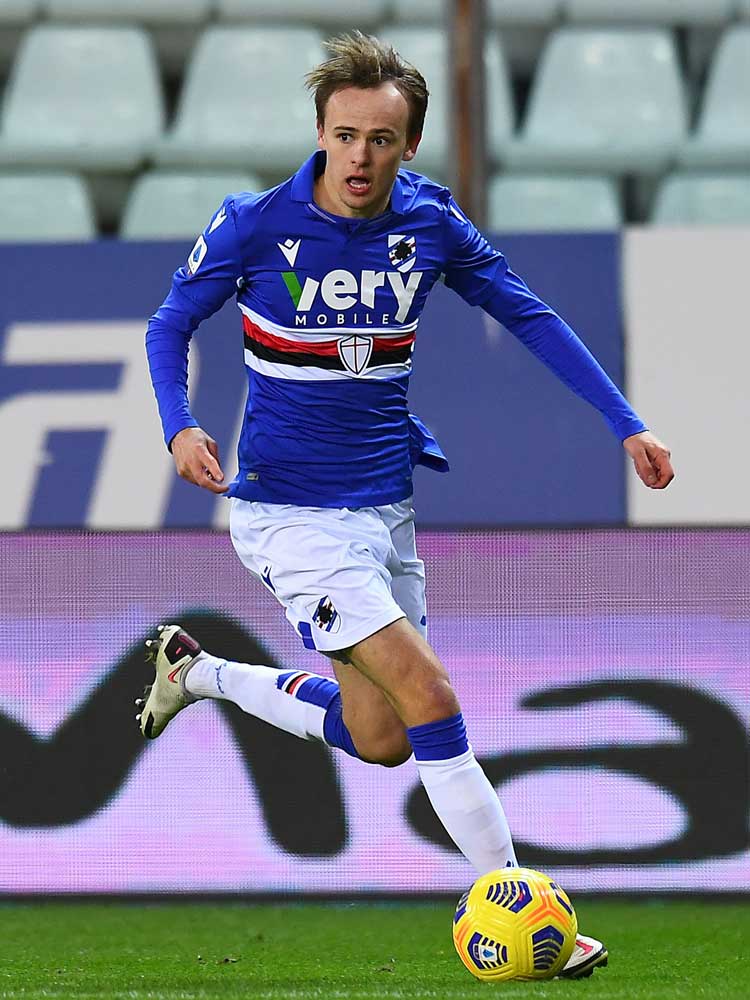 Profile
The €6.75m Sampdoria invested to recruit Mikkel Damsgaard from Nordsjaelland in September 2020 is proving some of the shrewdest money they have ever spent. Aged 20 at the time of his transfer, after recording two goals and four assists in 35 Serie A appearances despite being played in a variety of positions and systems, and then impressing to such an extent with Denmark at Euro 2020, when the time comes for him to be sold they will expect to receive at least between the €30m and €50m they have already mentioned.

"Damsgaard is an infant prodigy," said Claudio Ranieri, the manager who oversaw his first season with Sampdoria and who once nurtured, among others, Joe Cole. "He must be managed quietly without burdening him with too many responsibilities."

Tactical analysis
Damsgaard is a versatile attacking player who is as convincing from the left as he is the right, and whose flexibility extends to him being capable of featuring as the central attacker in a front three, or wide in a midfield four. Though most commonly selected in a wide position, he has also featured as a number 10, or as a second striker.

On the occasions his nominal position is a wide one, he seeks to move infield in the early stages of attacks in an attempt to receive possession in the inside channels, often doing so by making his move before the ball is released to assume his favoured position and then receive to feet. Though that makes him less likely to receive while wide and to then cut infield with the ball at his feet, his acceleration regardless means he is capable of doing so.

It is when combining with others that he is perhaps at his best, when he demonstrates his ability to continue to move the ball while under pressure, and to receive between the lines (above) or while being tightly marked. He is particularly effective when receiving on his right foot while an opponent is applying an intense press from behind, when he so often turns towards the centre of the pitch from the left inside channel.

When he has time and space it is his decision-making that often most impresses. He recognises when not to turn forwards and when to instead play a simpler, backwards pass to recycle possession, and offers both intelligence and variety against pressure being applied to him from behind; linking via quick combinations with the intention of receiving the ball again once he has progressed forwards, over regularly dribbling past his opponents, is his preferred method of penetration.

Damsgaard displays close control when he is the one striking the ball (above) – either when shooting or delivering a cross. His reluctance to push the ball too far in front of him before striking means his steps immediately before doing so are relatively short yet extremely sharp, contributing to him often whipping the ball and with minimal backlift, and just as often having shifted the ball before striking it to achieve the desired timing and height of delivery. It is for that reason that his crosses are rarely played with aggression, which can particularly undermine his efforts when from the left he is attempting to beat his closest opponents, but his technique does complement attempts to play low crosses and therefore those making forward runs.

When he is the one required to defend, he presses (below) with speed, when his acceleration contributes to his efforts to hunt the ball, and potentially to force play either infield or towards the touchline, before he sufficiently slows down when he needs to engage. That he is relatively lightweight doesn't discourage him from doing so or from duelling with aggression – particularly when attempting to tackle his opponent. His qualities make him particularly suited to supporting his team's press from central territory, and to counter-press. He is also often one of those defending from the most advanced territory, against the opposition's defence.

Role at Sampdoria
Ranieri regularly organised Sampdoria into a 4-4-2 or 4-4-1-1 (below) formation. Even on the occasions they used a back three he continued to favour a front two; the changes in their shape contributed to Damsgaard featuring in a variety of positions.

When selected on the left of their midfield four, he sought to drift infield in the early stages of their attacks to provide support to their front two, and did so in the knowledge that Tommaso Augello would provide their attacking width from left-back, and that he was capable of providing the link into the final third from those elsewhere in midfield. When two central attackers were paired up front – Fabio Quagliarella mostly featured alongside Keita Baldé, or Valerio Verre or Gastón Ramírez, whose instincts were to withdraw from alongside him and into deeper territory – Damsgaard prioritised playing passes in behind and targeted contributing to penetrative combinations, and had increased freedom to move infield behind their advanced front two.

If Verre or Ramírez started, he instead mostly remained inside the left inside channel, and provided more off-the-ball movements and contributed to one-twos and further combinations with Augello. It was later in 2020/21 that Damsgaard was given a central role in behind their starting striker, or selected as their right-sided midfielder.

When he was playing from the right, the left-footed Jakub Jankto featured on the left, and offered similar movements and adopted similar positions to those Damsgaard did earlier in the season. With Damsgaard towards the right, and therefore receiving possession and attacking against a different angle of pressure, he struggled to be as effective when travelling infield.

From the left it was his preference to receive and turn on to his right foot, ultimately to protect the ball. If pressure was being applied from behind, perhaps from the opposing right-back, that right-back struggled to move across him as Damgaard controlled and moved infield with his touches.

When he was instead on the right, the opposition's left-back proved capable of engaging and targeting Damsgaard's first touch with greater speed. As 2020/21 progressed, he therefore varied his movements as he received the ball, and increasingly sought to play around the outside of his direct opponent, after which he played low crosses into those making runs through the centre of the pitch.