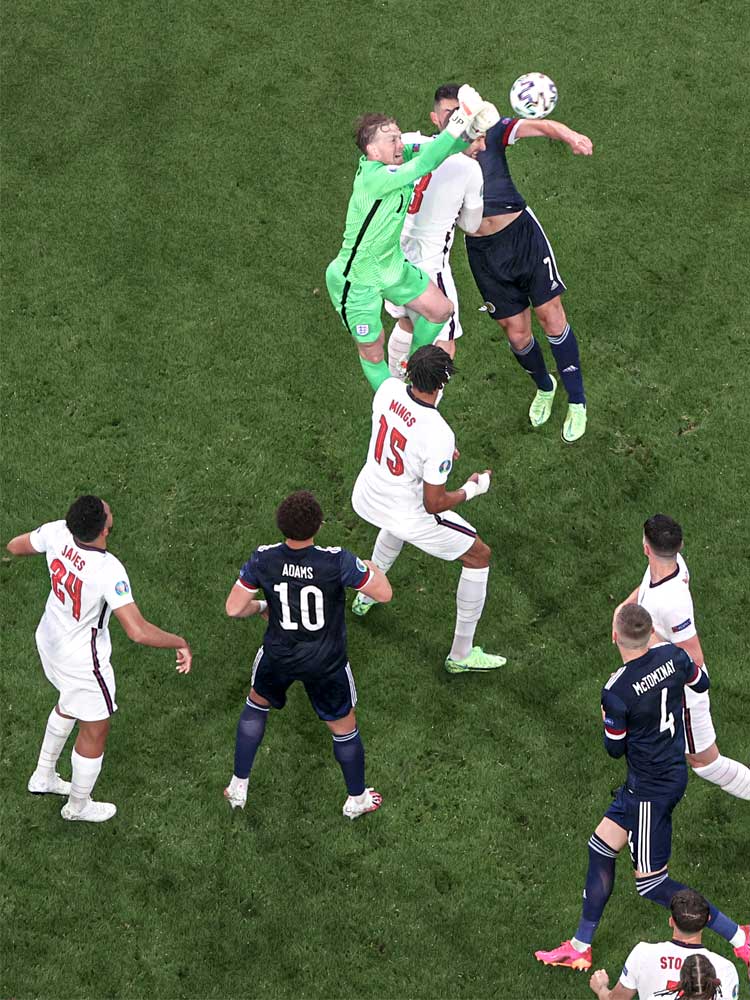 England and Scotland both remain in contention to advance to the knockout stages of Euro 2020 after playing out a goalless draw at Wembley. England had convincingly won their opening match, against Croatia, before Scotland had struggled when losing to Czech Republic, but it was Scotland who most impressed. After John Stones' first-half header hit the post, Scotland were the likelier goalscorers; it took a fine save from Jordan Pickford to deny Stephen O'Donnell, and Reece James' goalline clearance from Lyndon Dykes' effort, to deliver England's second clean sheet from two. "It was a bit frantic, it wasn't a game with a huge amount of control, and you have to make sure that sitting on three points as we were, you manage the tournament as well as the game," Gareth Southgate said. His opposite number, Steve Clarke, said: "We had chances to win, England had moments as well, but looking at this you wouldn't have known which is the favourite which is a credit to us. The most pleasing thing was we played when we had the ball and created a number of chances."

England were organised by their manager Gareth Southgate into a 4-3-3 formation built on the midfield three of Declan Rice, Kalvin Phillips and Mason Mount. Their opponents, Scotland, defended with a 5-3-2.

It was ultimately telling that England recorded 60 per cent possession but fewer shots on goal. Scotland's defensive structure was well organised – they restricted England's space. Che Adams and Lyndon Dykes remained in narrow positions when the ball was central, but moved to limit the time and space of John Stones and Tyrone Mings, and sometimes Reece James and Luke Shaw if possession reached the half-spaces or travelled wider. John McGinn was particularly influential – he marked Rice and prevented him from turning and playing forwards – and Callum McGregor and Billy Gilmour took Philips and Mount and moved to press England's full-backs when the ball was played to them from central defence.

With Scotland's wing-backs therefore free to take Raheem Sterling and Phil Foden, and their wider central defenders, if necessary, taking Mount or Phillips when Gilmour and McGregor were prioritising a full-back, England's chances to play forwards were consistently limited. During the first half a diagonal pass from Stones to James, complemented by a forward run into the relevant half-space from Phillips and Foden withdrawing to towards the ball, was followed by a forward pass to Foden that was almost always into his feet when he was under intense pressure from Andy Robertson, who forced him to retreat or fouled him.

Towards the left, Sterling or Mount targeted the space in behind Scott McTominay by making forward runs from deeper territory when a pass was played from behind them. Overloads were created towards the left, where Mount, Sterling and Foden all occasionally operated, encouraging combinations and forward runs. It was towards the left that England demonstrated greater potential, but as the first half progressed Southgate's team posed less of a threat and were either less willing or less capable of executing those forward passes and runs. Scotland remained effective in limiting their space, but England – Mount was perhaps the exception through preferring to play forwards – were risk averse.

During the second half, Rice finally left the centre of the pitch to occasionally operate as a false full-back and test Scotland, but where that should have given Shaw and Sterling increased freedom, Adams and Dykes covered him doing so, freeing up McGinn to move to alongside Gilmour and McGregor and therefore create an increasingly compact structure. England also remained reluctant to play penetrative passes and, amid their preference for safer options, missed chances to break lines. There were times when they played forwards and when their movement threatened Scotland's sense of balance, but neither occurred regularly enough for them to create goalscoring chances.

Scotland's three central midfielders covered a significant amount of ground and attempted to remain compact as they moved in line with the ball as it travelled across the pitch. Robertson and McGregor also sought to double up on Foden to stop him from cutting infield on to his left foot. England may instead have had had success had they attempted switches of play towards Foden or James after drawing Scotland's midfielders towards the left, but they only attempted doing so once Foden was replaced by Jack Grealish.

Grealish's arrival led to England winning set-pieces – they struggled to test Scotland from them – and contributed to them becoming more proactive in possession. Aside from when Stones had a free header from a corner in the first half, their delivery at and attacking of set-pieces was inferior to what has so often been the case under Southgate. With Grealish on the pitch their combinations towards the left again posed a threat, but England's decision-making, timing and execution around the penalty area continued to disappoint.

Steve Clarke set Scotland up into a 3-4-1-2 formation built on the back three of Scott McTominay, Grant Hanley and Kieran Tierney. England defended with the same 4-3-3 formation with which they attacked.

Foden and Sterling pressed the outside shoulder of their opponent, attempting to force him infield and therefore limit balls to Stephen O'Donnell and Andy Robertson. Scotland therefore regularly attempted to feed Gilmour so that he could dictate play, but Mount's intensity regularly forced Gilmour's head down and prevented him from playing forwards. He was instead more influential when England dropped off, or if David Marshall caught deliveries and played to Gilmour before Mount could recover his defensive position.

McGinn also played with intelligence during the first half, both without the ball and when drifting wide to draw Rice and free up Dykes or Adams to withdraw into the space he had vacated. When Scotland started executing penetrative passes that eliminated England's midfield during the first half, Rice adjusted by passing McGinn on to James as he drifted wide so that he could instead protect the centre of the pitch.

Scotland also progressed possession well towards the left. Dykes sought to drift infield to encourage Robertson to advance, and when the ball was played to Robertson, Tierney would start making an overlapping run. Between them they offered significant potential in crossing from deeper or advanced territory. It was from attacks from the left that Scotland created two good goalscoring chances – one in each half – at the far post. They attacked the penalty area with both strikers, a central midfielder and their right-sided wing-back, ensuring they could both offer attacking options and security behind the ball.

England were somewhat passive, and predominantly operated in a mid-block. When they pressed high they once succeeded in recovering the ball in advanced territory and creating a chance on goal; given Scotland were so often looking to build possession they had further opportunities to do so, but their caution meant they instead sought to protect the relevant spaces.

McGinn's positioning often troubled them. Scotland occasionally succeeded in finding him with penetrative, diagonal passes from a wider central defender, but a lack of quality in the final third meant that they proved unable to score.