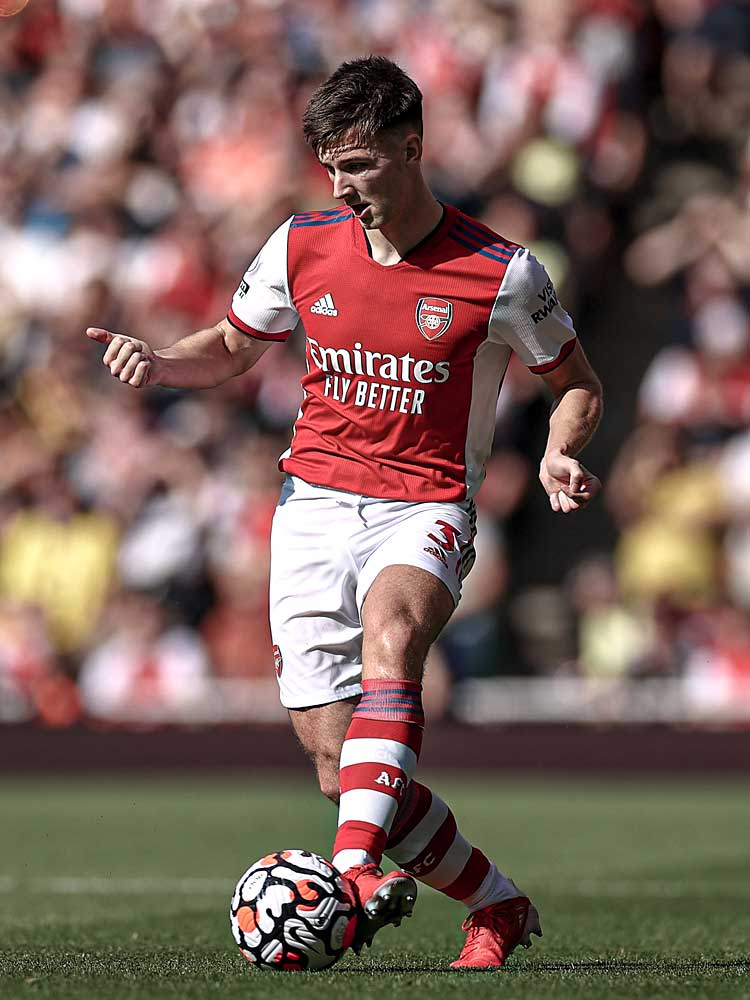 Profile
During a 2020/21 that brought plenty of disappointment for Arsenal, Kieran Tierney was very much a positive. The Scotland left-back, signed from Celtic aged 22 for £25m in 2019, has quickly become one of Arsenal’s most important players, key to their defensive solidity and significant in attack. Without him, they look far less convincing at both ends of the pitch.

Tierney has played a significant role in any improvement during Mikel Arteta's reign. An injury to Tierney also just so happened to coincide with a poor run of form, and he has become so key to his team that his manager already thinks he could be a future club captain. “He has the respect and the admiration of every member of the staff and every player," Arteta said. "He's a natural leader.”

Tactical analysis
Tierney offers a real defensive presence – he is strong in the tackle and capable enough in the air despite his relatively small frame. Opponents find him hard to beat and he is particularly successful against left-footed right wingers who attempt to cut infield with the ball. He is also intelligent with his positioning and shows good awareness to cover and protect the central defender playing alongside him. He has a good turn of pace and does well to recover if he is taken on around the outside, working hard to prevent crosses coming into the penalty area.

He is keen to get tight to an opponent as quickly as possible after they receive the ball with their back to goal, aiming to force play back the way it came without making an active attempt to win the ball. When an opponent receives the ball facing towards him, Tierney closes them down as the ball is travelling towards the opponent, and attempts to show them down the outside, inviting them to take him on, confident in his ability to compete in a foot race.

He is similarly capable in possession. He is composed on the ball and possesses the technical quality to vary his crosses and time a ball into the area to find a specific target. Whether crossing first time and low, following an overlap, or when playing the ball more delicately from a deeper position, he has plenty of success. He has the ability to deliver a cross when he is running at speed – owing to his good balance, low centre of gravity, vision and timing – but is just as effective when he has to create his own space to cross. He is very good at slowing his opponent down – often stopping dead – before shifting the ball forwards and accelerating explosively to advance beyond his opponent and put in a cross from near the touchline.

He is far stronger on his left foot than his right, so his preference is always to take opponents on around the outside, but he uses the fact that opponents expect him to attack down the line to his advantage. When a defender cuts off the path to his left foot, Tierney can swivel infield towards his right. He is not going to threaten goal in those situations, so defenders are generally happy to have him move towards the middle of the pitch, where it is more crowded, but Tierney has the vision and quality on the ball to pick out the run of a teammate towards the space behind the defender who has shepherded him into the middle of the pitch (above). In those situations, Tierney is capable of either sliding a ball between opponents with his right foot, or of lifting it over them.

His short passing game is a real strength, but also serves to highlight a deficiency – his long passing and switches of play are not very effective. An area in which his Scotland international teammate Andy Robertson thrives for Liverpool – combining with right-back Trent Alexander-Arnold – Tierney lacks the same quality. In the modern game, switches of play are of huge importance in trying to stretch opponents by drawing them from one side to the other, and that is something Tierney needs to improve to fulfil his potential.

Role at Arsenal
Tierney offers positional flexibility to Arsenal, through being able to play at left-back, left wing-back or as the left-sided centre-back in a back three. Given Arteta has switched between systems consistently during his time as manager, Tierney’s ability to play in a number of positions is extremely useful.

Whether he is playing as a wing-back or a full-back, Tierney consistently patrols the left, providing Arsenal’s width with the player ahead of him – the left midfielder in a 4-2-3-1 or the left-sided attacker in a 3-4-3 – tucking in. Usually that player is Pierre-Emerick Aubameyang, who seeks to get as close to goal as possible, leaving space on the outside for Tierney to advance into.

Arteta likes his team to forge opportunities to cross the ball, and Tierney is responsible for many of their crosses. He works up and down the left to find space to cross – often in behind the opposition’s defence (above) – and varies his deliveries to put accurate balls into the area with a specific target in mind. He is most effective when drilling a low ball across the face of goal, often leaving the recipient with a simple tap-in. When he gets into an advanced position in a more central area, he is more than willing to shoot.

Though the presence of a player who thrives in front of goal – and is essentially a second striker – ahead of Tierney means there is space for him to attack into on the left wing, it also means he is sometimes left isolated when Arsenal are out of possession. It is for that reason that Arsenal are so in need of a player like Tierney who is capable in one-on-ones. If he is beaten they can be left too exposed at the back. He is so comfortable when isolated by an opponent, however, that the centre-back nearest to him can hold their position in a central area (above), primed and ready to intercept any crosses that make it past Tierney, but also confident that the Scot will not be beaten. When that gap is too big, the left-sided defensive midfielder will move across to cover.

Given how much he contributes to his team when they have possession, his impact is somewhat more limited when he plays at left centre-back in a back three. However, he does not simply sit back when playing there but instead provides underlapping runs on the inside of the wing-back ahead of him, creating overloads on the left. That is something that is particularly beneficial to his international team; he doubles up with Robertson to make a formidable team, ensuring they have crossing options in the outside lane as well as in a narrower position. Tierney’s stamina to make recovery runs back into defence is even more important when he is playing at centre-back.

Tierney is a top-class full-back who has very few weaknesses, and plenty of leadership qualities. At £25m, he has proven a bargain for Arsenal, who may need to get back into Europe to fulfil his ambitions.