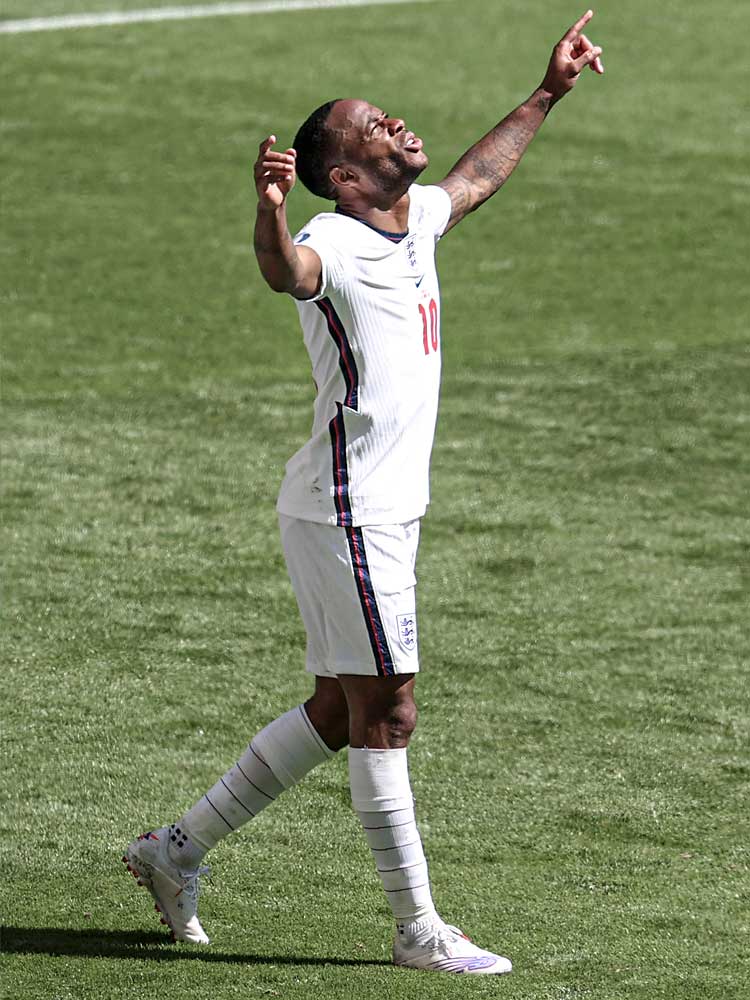 England made a winning start to Euro 2020 at Wembley Stadium after Raheem Sterling scored his first goal at a major international competition just 523 yards from where he grew up. Avenging their defeat at the semi finals of Russia 2018, Gareth Southgate's team impressively took near-full control, giving them victory in their opening fixture of a European Championship for the first time in their history. "The performance was really good," Southgate said. "It was a big occasion, a sweltering hot day, and the players settled really quickly, used the ball well and limited Croatia to very few clear chances." His opposite number, Zlatko Dalic, said: "It was a tough match, conditions were tough and humid. We ran well but didn’t show enough in attack. We need to fix things but I am encouraged and optimistic."

England were organised by their manager Gareth Southgate into a 4-3-3 formation led by the front three of Phil Foden, Raheem Sterling and Harry Kane. Their opponents, Croatia, defended with a 4-4-2 in which Luka Modric advanced to alongside Ante Rebic, and Andrej Kramaric and Ivan Perisic withdrew into midfield.

The hosts had a fluid in-possession structure in which six players – their front three, Mason Mount, Kalvin Phillips and one of their two full-backs – mostly attacked and the other five worked to maintain their defensive security.  They were adept at managing play; Kyle Walker, Kieran Trippier and Phillips recognised what was unfolding on the pitch and adjusted their roles accordingly; Phillips also remained withdrawn on the rarer occasions both full-backs advanced.

Modric and Rebic attempted to contain John Stones, Tyrone Mings and Declan Rice, but England regularly succeeded by playing to Rice's feet, at which point he drew both and then played to Stones, Mings or a full-back. Mount often advanced to alongside Sterling, Foden and Kane, demonstrating England's fluidity, which was particularly influential towards the left where they targeted the space between full-back and central defender. One attacking player regularly drifted wide to draw Sime Vrsaljko with him, and another made a penetrative run from a deeper position to in behind. It was one such pattern that led to Sterling scoring the game's only goal, and one also occasionally used with throw-ins from in the midfield third.

England's periods of possession involved both shorter build-up play and longer passes in behind. They posed their greatest threat when switching the tempo of their attempts to build, and succeeded in progressing through Croatia's shape with a quick penetrative pass after more slowly using the ball. As the first half progressed, however, they became more predictable and less effective; they offered less movement, likely because of the heat. That they sought to retain the ball and preserve their energy instead of take risks with runs and passes of a reduced quality showed both experience and an understanding of tournament football.

During the second half Phillips and Mount increasingly moved to towards the ball. Kane also had more success with the runs he makes into deeper territory, with which he combined with those around him. Croatia were drawn further away from their goal by England's movements, which occasionally created spaces to play through; England's fluidity towards the left was complemented by diagonal runs made off the shoulder of their opponents; Phillips and Sterling were among those to make them as the latter scored, when Kane's movements towards the right drew Domagoj Vida from the space Sterling ran into.

Once in front, England admirably managed the tempo of play to restrict Croatia from building momentum, simply by retaining the ball. It was only in the latest stages, and after the introduction of Marcus Rashford, when they attacked more on the counter – an approach they could yet require in the fixtures to come.

Croatia manager Zlatko Dalic selected a 4-3-3 formation led by Ivan Perisic, Andrej Kramaric and Ante Rebic. England defended with several structures, from what was nominally a 4-3-3.

The in-possession strategy of Gareth Southgate's team was focused on limiting the time and space on the ball of Croatia's midfielders. Harry Kane was therefore rarely involved in applying an aggressive press; he drifted in centrally territory around Marcelo Brozovic, and Phil Foden and Raheem Sterling pressed the outside shoulders of central defenders Domagoj Vida and Duje Caleta-Car but without significant intensity, owing to England's willingness to allow them to play passes, such as long balls, beyond those they were working to prevent.

Kane, Declan Rice, Kalvin Phillips and Mason Mount worked around Brozovic, Luka Modric and Mateo Kovacic to prevent them from receiving, turning, and dictating play in advanced areas.  They consistently succeeded in doing so, forcing those midfielders to move to outside of their favoured shape to receive; England resisted following them, in the knowledge that doing so would open penetrative passing lanes, and instead moved as a collective if the ball was played in a specific direction, when the nearest player would move to close down key opponents if the ball was sent towards them.

Croatia attempted to adjust by targeting the wider areas of the pitch, but England also had an effective approach there – one that ensured a full-back wasn't left to defend one-on-one against a wide forward and that prevented overloads. The willingness of Sterling and Foden to track their opposing full-backs was significant in protecting Kieran Trippier and Kyle Walker. England also regularly stopped crosses at source – perhaps owing to lessons learned from their defeat by Croatia in their semi final at Russia 2018 – and were also well positioned to defend against crosses if they were executed. Where they perhaps need to continue to improve is at the second phase of crosses, which is where Croatia's few opportunities came from, because they otherwise prevented them from accessing key attacking areas by defending so well – and because of Croatia's struggles to find solutions.

It was after the introductions, in the second half, of Nikola Vlasic, Bruno Petkovic and Josip Brekalo that Croatia offered more in the attacking half. The dynamism and aggressive positioning between the lines of Vlasic encouraged Modric and Kovacic to operate from deeper territory, drawing their opponents and creating increased space between the lines. England, by then, were also moving deeper as a team to restrict space between the units and in behind, and to attack on the counter; Croatia continued to struggle to penetrate through them.