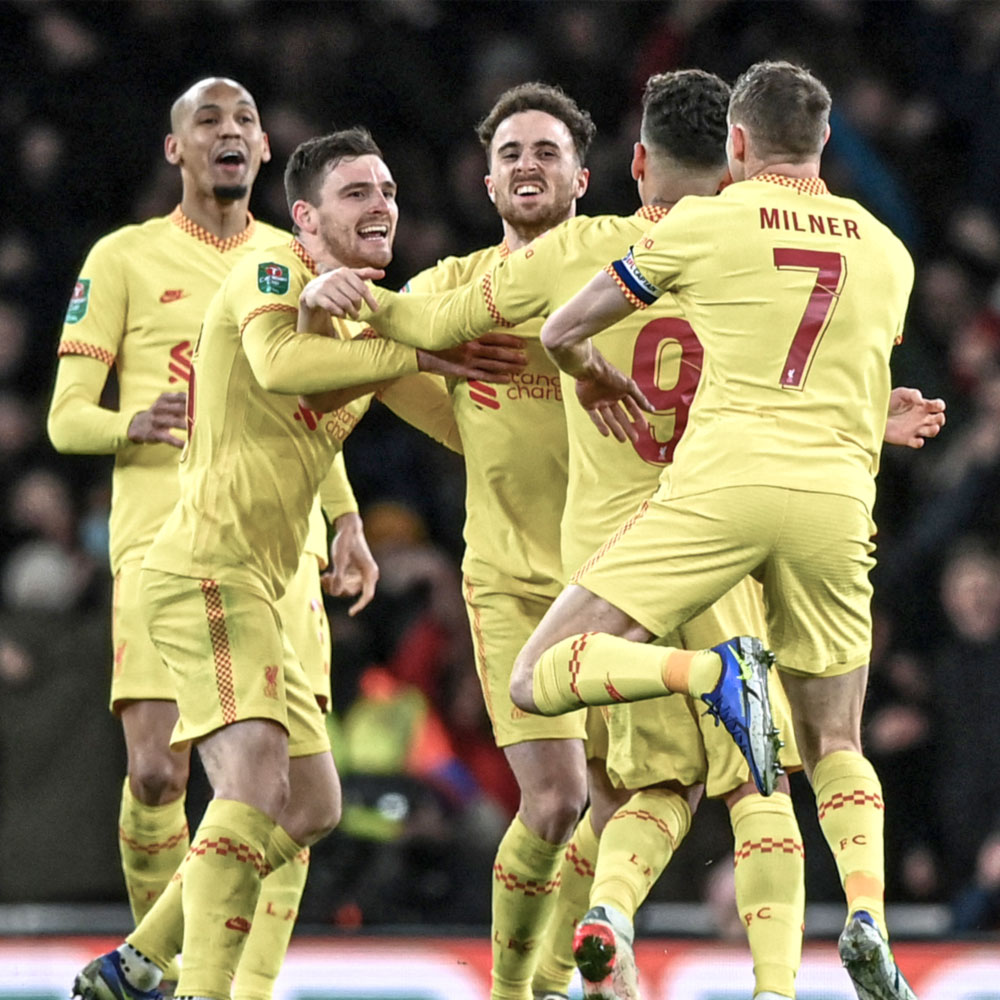 Liverpool reached their first domestic cup final since 2016 with an ultimately comfortable victory over Arsenal in the second leg of their League Cup semi final at the Emirates. Mikel Arteta's team started the stronger, but Diogo Jota put the visitors ahead with a shot that wrong-footed Aaron Ramsdale just before the 20-minute mark, and Jürgen Klopp's men controlled the game thereafter. Alexandre Lacazette, who hit the woodwork at 0-0, missed a golden opportunity to equalise early in the second half. Jota duly punished the hosts with 15 minutes to go, running on to a Trent Alexander-Arnold pass – the right-back's 14th assist of the season – to fire Liverpool into a Wembley showdown with Chelsea next month.

"The mood in the dressing room is over the moon," said Klopp, who has now won 10 of 11 semi finals in his coaching career. "The boys were exceptional. First half, Arsenal started lively, then we calmed it down and played good football. Diogo Jota was on fire. We were completely convinced when he arrived at the club he would help us massively. Since he is here he has made another step, he has turned into a really world-class striker."

"Really disappointed, we wanted to be in the final," said a downbeat Arteta. "There are moments we had them, and you have to score and take advantage in the tie. We hit the bar, lost big opportunities in big situations to finish the game off. We really believed we could do it, we created an incredible atmosphere, the players were excited so it is a hard one to take."

Early progress on the left
Mikel Arteta set his Arsenal team up in a 4-3-3 attacking formation, against Liverpool’s familiar 4-3-3 defensive shape. Albert Sambi Lokonga played as a single pivot in front of centre-backs Gabriel and Benjamin White, with Martin Ødegaard and Emile Smith Rowe initially operating as the two number eights. The hosts proved more effective down their left side in the early exchanges; with Kaide Gordon holding his position high and wide on the Liverpool right, Trent Alexander-Arnold was forced to defend more space ahead of him. That encouraged Smith Rowe to take up a higher position in support of Gabriel Martinelli (below); quick combinations, dribbles forward and inside runs off the ball helped Arsenal progress in these areas.

Creating a double pivot
By contrast, the hosts struggled to access their right side in any meaningful way during the first half. Despite hitting the bar with an early free-kick, centre-forward Alexandre Lacazette was somewhat limited in his involvement; he started dropping out alongside Bukayo Saka on the right, creating a similar pairing to Smith Rowe and Martinelli on the left. Ødegaard, meanwhile, dropped back to form a double pivot alongside Lokonga (below). This allowed for easier access to either side of the pitch, and also gave additional cover and support underneath the ball should either wide pair need to play back inside and recycle possession.

Playing over the Liverpool block
In the second half, Smith Rowe pushed even higher to join Lacazette in occupying both Liverpool centre-backs (below). Saka and Martinelli held their positions wide, to attack around the away side’s back line, while Ødegaard continued to drop alongside Lokonga. Direct passes across the pitch towards the far-side winger helped Arsenal progress, especially when Liverpool attempted to lock the ball on one side of the pitch with their aggressive midfield press. Balls over the Liverpool back line also threatened on occasion, especially when both Liverpool centre-backs were occupied by Lacazette and Smith Rowe. The hosts’ most effective attacking play in the second half came from play over, rather than through, Liverpool’s block.

Trying to add Tierney to the attacks
Arsenal’s direct passing continued to target Martinelli’s wide runs on the left, looking to exploit the space in behind Alexander-Arnold and making use of Smith Rowe’s advances around the right-sided centre-back. Left-back Kieran Tierney pushed forward in support of the play into Martinelli or Smith Rowe (below), leaving Arsenal with a back line of three protected by the converted double pivot. Takehiro Tomiyasu advanced much less from right-back, with Lacazette continuing to drift to the right and Saka maintaining his width on that flank too. Ultimately, however, the hosts created little in the second half and were unable to reach a second domestic cup final under Arteta.

Early troubles against an effective press
Jürgen Klopp set Liverpool up in their instantly recognisable 4-3-3 attacking shape, with Fabinho as the single pivot in midfield, and Curtis Jones and Jordan Henderson the number eights ahead of him. Arsenal formed a 4-4-2 defensive shape and pressed high, curving their pressure to right-sided centre-back Joël Matip (below) and attempting to force play to the Liverpool right. Bukayo Saka moved inside to cover Jones, leaving left-back Andy Robertson free – but the hosts did such an effective early job at locking play on one side that Liverpool struggled to switch play out to him. Martin Ødegaard locked on to Fabinho in the middle, which allowed Emile Smith Rowe to support Alexandre Lacazette in the front line. The pair pressed on to both Liverpool centre-backs, while the dangerous Trent Alexander-Arnold was consistently marked by Gabriel Martinelli.

Rotations led by Jones
When Liverpool were able to build into midfield, they began to rotate and build their preferred attacking patterns. Jones often initiated these movements by pushing forward to the left from central midfield (below), with Robertson supporting underneath and around the outside. This enabled Diogo Jota to move inside from his starting position on the left, with Roberto Firmino dropping into midfield to receive and overload when necessary. Kaide Gordon held a wide position on the Liverpool right, while Henderson often dropped to support Fabinho in midfield. This created space for Alexander-Arnold to move forward and inside from right-back, as he did in the build-up to Liverpool’s first goal.

Alexander-Arnold’s inside influence…
Not for the first time, Alexander-Arnold proved to be the leading attacking influence on the game, especially when he moved inside. Jones continued to move wide on the left, while Gordon maintained his high and wide attacking position on the right. While Jota moved inside to occupy one centre-back, Firmino dropped deep to drag the other out of position and create space for central-midfield runners to advance into (below). This created a front line of four against the Arsenal defensive line, and space in behind it for Alexander-Arnold to exploit; it was in these situations that Liverpool looked most effective as an attacking force.

… and on the outside too
The visitors also attacked in their more familiar 4-3-3 shape, from which Firmino drops short and the two wide attackers move inside. That gave Alexander-Arnold the space to overlap on the right (below), from where he produced some typically outstanding crosses into dangerous areas. Jones continued to give width on the left, with Robertson much more reserved in his attacking movements behind him. Here, Henderson formed a double pivot alongside Fabinho, to protect and cover behind their wide runners. It was from a midfield turnover that Alexander-Arnold played the pass into Jota for Liverpool’s second. This killed the tie and saw Klopp’s team advance into a first domestic final since they lost the League Cup final to Manchester City in his first season at the club.