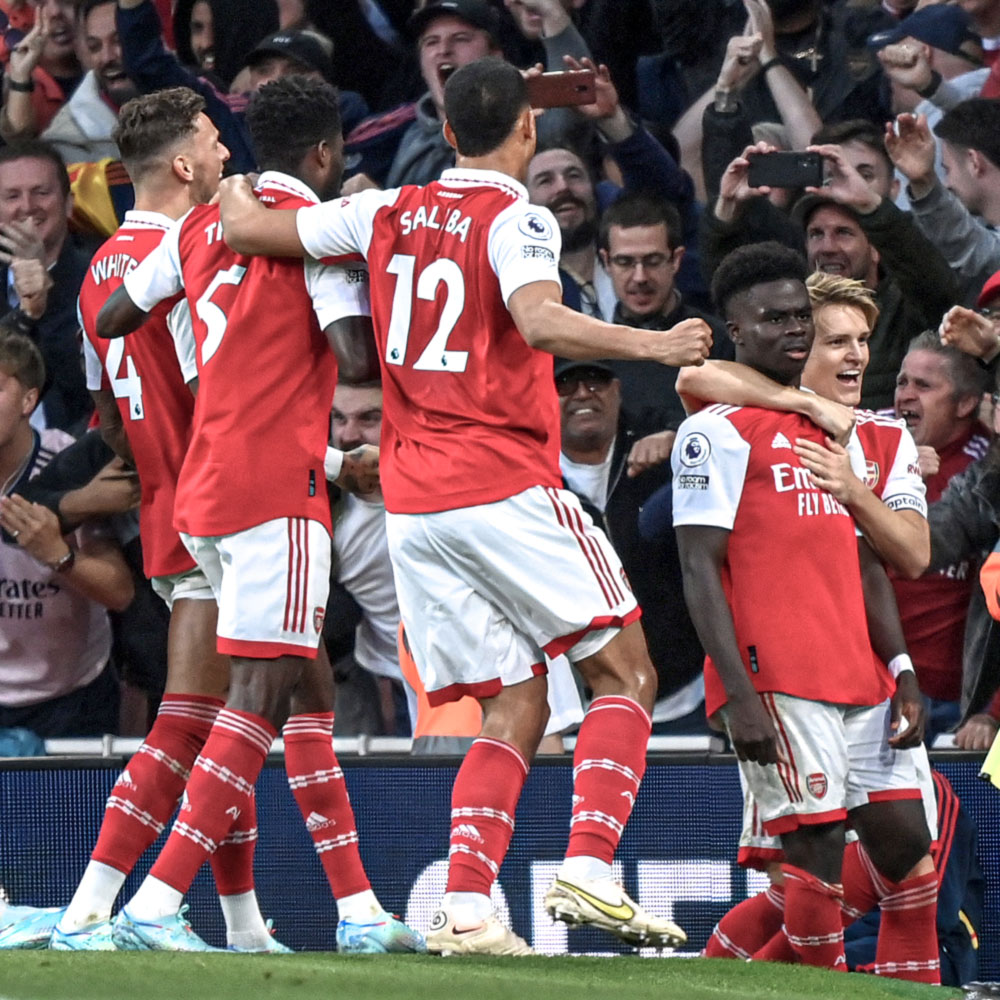 Arsenal returned to the top of the Premier League with an eighth league victory from nine games of the new season. A first-minute strike from the impressive Gabriel Martinelli and two goals from Bukayo Saka helped the Gunners to a 3-2 win against Liverpool, who despite equalising twice on the day continue to look a pale imitation of the team that came so close to a quadruple only last season. Darwin Núñez and Roberto Firmino were the goalscorers for the visitors, who lost Luis Díaz to injury and replaced the embattled Trent Alexander-Arnold at half-time.

“I’m really happy, really proud of the team and really satisfied with the way we played,” said Arsenal manager Mikel Arteta, whose team had failed to score against Liverpool in their previous six meetings. “We showed real desire, composure, quality and courage to play and win the game the way we won it. Physically what we have done, and what the players have produced individually, was phenomenal. There’s not another way. Against Liverpool you have to match or be better than them at that.”

"Our situation is now obviously a really difficult one," said Arteta's opposite number, Jürgen Klopp, who felt his team deserved a first-half penalty for a handball by Gabriel. "It’s already difficult enough with injuries now on top of that, but if, in a game like this, decisions go against you, it doesn’t help. I think a draw would have been a deserved result."

Mikel Arteta set his Arsenal team up in an initial 4-2-3-1 shape that in effect looked like more of a 4-3-3, with Thomas Partey operating as a single pivot in midfield and Granit Xhaka pushing higher to play like more of a number eight alongside Martin Ødegaard. The hosts started well, with plenty of quick and incisive attacking transitions through wide areas. On the right, Ben White pushed forward from full-back, to target the space in behind Kostas Tsimikas (below), who aggressively jumped out to press Bukayo Saka. This initially limited Saka’s threat, but left spaces around him for Arsenal to exploit. Gabriel Martinelli held his width on the left flank, making effective runs in behind from a wide starting position – exactly as happened for Arsenal’s first goal in the very first minute. Xhaka pushed high where possible to support Gabriel Jesus, but he and Ødegaard struggled to have any impact between the lines for much of the first half.

Arsenal’s build-up between their two first-half goals tried to make use of their overload in central midfield as much as possible. Jesus would drop to add an extra central body – often drawing one of the Liverpool centre-backs with him  – or to rotate with Xhaka when the latter pushed high. The first line of Liverpool’s 4-4-2 out-of-possession shape screened central access well, though, while both wingers narrowed inside to support their central midfielders (below). This limited Arsenal’s penetrative passing from their centre-backs, with Liverpool able to increase their periods on the ball and the hosts dropping into a deeper block. This did, however, create room for Arsenal's wide attacking transitions.

The threat of Martinelli

Martinelli offered penetrative runs in behind throughout. He was always looking to exploit through passes or balls over both Trent Alexander-Arnold and Joe Gomez, who replaced the struggling Liverpool right-back for the second half. Xhaka looked to support with forward runs for the second phase (below), which also stopped Liverpool doubling up on Martinelli as he received in behind. Ødegaard initially held his position in the right inside channel, ready to inhabit the spaces between the lines once Martinelli had secured the ball in an advanced position. Partey continued to support underneath Xhaka as the single pivot.

Along with Martinelli’s penetrative runs, Arsenal’s overall attacking play down their left continued to threaten in the second half. Their attacks on this side proved much more efficient at breaking into Liverpool’s penalty area, compared with their right side. Rotations between Xhaka, Martinelli and Jesus disrupted Liverpool’s marking system; Arsenal always had one player stretching around the outside of Gomez, one player running in behind through the inside channel, and one player pinning Joël Matip (and later Ibrahima Konaté) as the first centre-back. In doing so, they regularly worked the ball into the box and threatened Liverpool’s back line, as they proved ultimately good value for a hard-fought three points.

Following a successful rehearsal against Rangers in the Champions League, Jürgen Klopp once again set Liverpool up in a 4-2-3-1 shape that, when Diogo Jota pushed further forward alongside Darwin Núñez, resembled more of a 4-4-2. Left-back Kostas Tsimikas pushed higher, with Luis Díaz initially moving inside to help Thiago and Jordan Henderson compete against Arsenal’s three central midfielders (below). This meant an increased recovery distance for Tsimikas, however, with Bukayo Saka a key transitional threat for Arsenal on that side. Once Liverpool established consistent spells with the ball, however, they looked to Virgil van Dijk to cover across earlier, or for Thiago to drop out slightly. This better covered the transitional spaces, while also helping connect the midfield into the front line in possession.

Darwin Núñez made consistent unselfish forward runs through the right inside channel, which helped Liverpool break beyond Arsenal’s compact back line (below). Mo Salah, who started wide on the right, struggled to beat Takehiro Tomiyasu in one-on-one situations – but he was able to drag the left-back away from the back line by dropping. Curled forward passes from Jordan Henderson and Trent Alexander-Arnold then found Núñez’s bending runs in behind. He was called offside on occasion, but the Uruguayan posed a consistent threat and was supported by Jota, who occupied the other centre-back, and the consistently narrow Díaz. Liverpool’s first equaliser came through one such moment, but with the roles reversed – Díaz ran in behind and crossed for Núñez to finish from an attacking central area.

As the game went on, Arsenal worked to force the ball to the Liverpool left through an aggressive high press. Gabriel Jesus locked play one way; Virgil van Dijk was then pressed by Bukayo Saka, with Tsimikas also receiving under pressure as Ben White jumped very high from right-back to press deep into the Liverpool half. The visitors’ double pivot was then covered by Martin Ødegaard and Granit Xhaka (below), with Gabriel Martinelli narrowing to press Henderson from behind if needed. This proved effective in a second half that Arsenal largely dominated, despite Roberto Firmino – a first-half replacement for the injured Díaz – equalising for the visitors.

Klopp made a number of second-half changes, including the withdrawal of Salah from the Liverpool right. Henderson moved across to that side, with Fabinho joining Thiago in the double pivot, but the visitors’ right proved ineffective when in possession from that point. Firmino was the only meaningful attacking influence between the lines in the second period, dropping short as Núñez stayed high and Jota occupied the other inside channel (below), but there was a lack of consistent quality once the changes had been made. Arsenal eventually switched to a back five, with Kieran Tierney on for Ødegaard, at which point Liverpool pushed both full-backs forward in attack. But they lacked quality in central spaces and were unable to break through the home side’s low block on the way to another disappointing result.